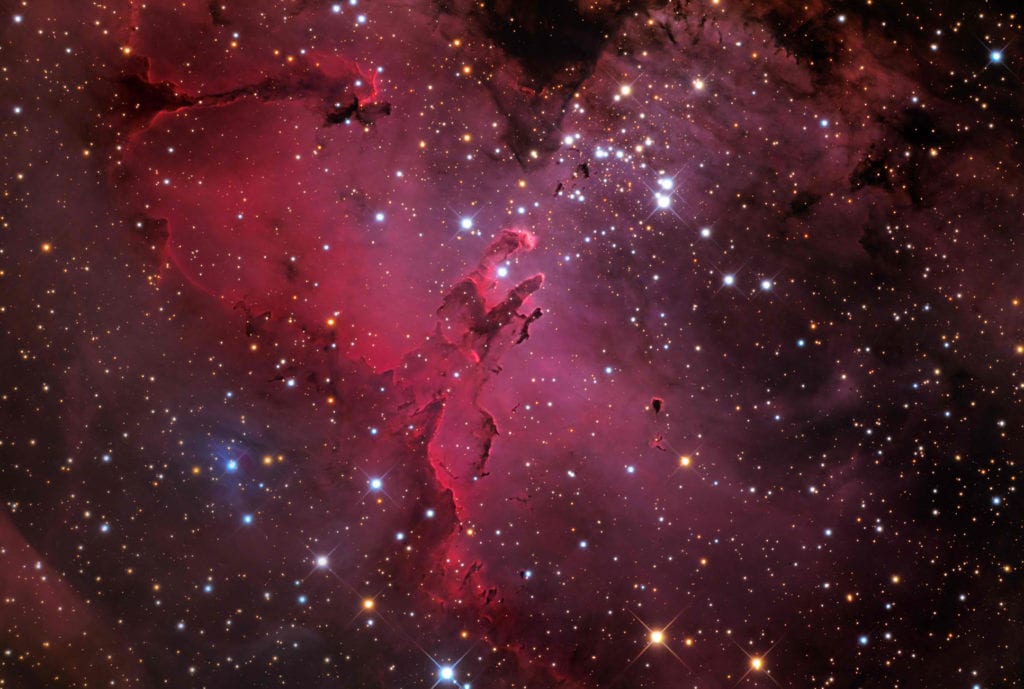 An emission nebula is a nebula formed of ionized gases that emit light of various wavelengths. The most common source of ionization is high-energy ultraviolet photons emitted from a nearby hot star. It is usual for a young star to ionize part of the same cloud from which it was born, and in many emission nebulae, an entire cluster of young stars is doing the work.

There are several different types of emission nebulae. The most common are H II regions, in which star formation is taking place and young, massive stars are the source of the ionizing photons, and planetary nebulae, in which a dying star has thrown off its outer layers, with the exposed hot core then ionizing them.

The color of an emission nebula depends on its chemical composition and degree of ionization. Due to the prevalence of hydrogen gas in interstellar gas and its relatively low energy of ionization, many emission nebulae appear red due to the strong emissions of the Balmer series. If more energy is available, other elements will be ionized and green and blue nebulae become possible.

How is an emission nebula created?

An emission nebula is created by ionised gases, usually by high-energy ultraviolet photons emitted from a nearby hot star, that emit light of various wavelengths.

An emission nebula tends to be red in color because of the abundance of hydrogen. Additional col-ours, such as blue and green, can be produced by the atoms of other elements, but hydrogen is al-most always the most abundant. The mass and and density of each nebula can vary greatly, de-pending on the size of the nebula and the compactness of the nebula.

Emission nebula are very impressive to look at and are favourites of astrophotographers.

How do emission nebulae emit light?

In an emission nebula, a star energises the atoms in the cloud with ultraviolet radiation. As these at-oms fall back to lower energy states, they emit radiation. The process is similar to that of a neon light, and this causes the nebula to glow.

What is the difference between an emission nebula and a reflection nebula?