Size of Makemake compared to the Earth

Facts about the dwarf planet Makemake

The Dwarf Planet Makemake: How Its Discovery Changed the Way We Classify Planets

One of the most exciting things about science is that it is always evolving. Throughout time, we have come to know our solar system better. And sometimes that involves correcting and redefining previously established facts. Let us learn about Makemake, whose discovery gave rise to the dwarf planet group and challenged the way planets are classified.

Into the Solar System

Our understanding of the universe is ever-changing. It is so big that our ideas about it now will only keep on changing as we uncover more and more of it. Such is the case for dwarf planets.

We can remember that Pluto was once considered the ninth planet in our solar system. What has caused this change? To understand more about this, let us take a look at the solar system.

The Sun is the center of the solar system. Nearest to it are the four terrestrial planets Mercury, Venus, Earth, and Mars. After the orbit of Mars is a region is called the asteroid belt. It is populated by many solid objects with irregular shapes called asteroids. These objects are sometimes referred to as minor planets.

Beyond the asteroid belt are the giant planets Jupiter, Saturn, Uranus, and Neptune. Past the orbit of Neptune is the Kuiper belt. The Kuiper belt is made up of planetesimals. These are solid objects which are believed to be the leftovers during the formation of the solar system.

In 1801, astronomers discovered Ceres within the asteroid belt. The number of objects like this being discovered only increased. This would mean an addition of a new planet. So, to avoid this confusion, astronomers classified the new objects as asteroids. It was in 1930, when Pluto was discovered, that it was finalized that the solar system had nine planets.

In 2005, the definition of what makes a planet was challenged. The planet-like objects Makemake and Eris were discovered, along with the announcement of Haumea, a similar object. They are in the Kuiper belt along with Pluto.

The newly discovered objects have very similar characteristics to Pluto. If they were to be considered planets, the number of planets that we have will keep on growing. This led astronomers to reclassify Pluto into a new class called plutinos. Other terms used to refer to them include subplanet and planetoid. Now, we call these objects “dwarf planets.” This term was coined by Alan Stern, an American planetary scientist.

Collectively, minor or dwarf planets along the Kuiper belt and beyond are also called trans-Neptunian objects (TNO) because they lie outside the orbit of Neptune.

Categorizing newly discovered objects became a challenge to astronomers as they explored the outer bounds of the solar system. This was addressed during the International Astronomical Union (IAU) General Assembly in 2006 where they made a resolution for the definition of celestial objects around the Sun namely the planets, dwarf planets, and small solar system bodies.

What is a Planet?

The following are the three characteristics a planet must have:

These conditions set by the authority about planets will help us in setting them apart from dwarf planets. In 2006, Pluto lost its status as a planet because it did not meet the third criteria stated in the resolution. In short, its neighboring region is not clear of other objects. Pluto instead became the prototype of dwarf planets.

What is a Dwarf Planet?

A dwarf planet must have the following characteristics:

Based on the criteria given by the IAU, NASA’s website states that:

“A dwarf planet is a celestial body that orbits the sun, has enough mass to assume a nearly round shape, has not cleared the neighborhood around its orbit, and is not a moon.”

The five dwarf planets recognized by the naming authorities, arranged on their distance from the Sun, are:

What are Small Solar System Bodies?

Small solar bodies are objects in the solar system that are:

This classification includes comets, most asteroids, and most TNOs. 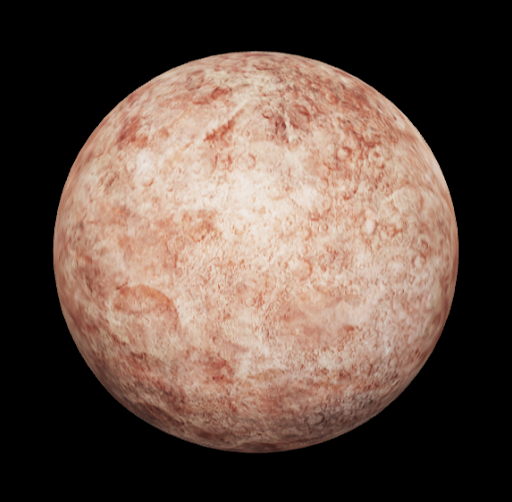 Makemake was first observed on March 31, 2005. Astronomers at the Palomar Observatory came across this object when there was still no distinct category to put it in. The people responsible for spotting it are M.E. Brown, C.A. Trujillo, and D.L. Rabinowitz. The discovery was announced publicly on July 29, 2005.

In 2008, the International Astronomical Union officially recognized it as a dwarf planet. The approved name for this newly identified object is “Makemake”. This unique name is from the Polynesian mythology of the Rapa Nui, the native people of Easter Island. Their god, Makemake, was a chief god believed to be the god of fertility and creator of humanity.

Before it got its AU-approved name, Makemake was designated as 2005 FY9 , with the minor-planet number 136472. Its first codename was “Easterbunny” after being discovered right after Easter.

The discovery of Makemake, together with that of Eris and Haumea, became a crucial point in redefining the requirements in classifying planets. This led the International Astronomical Union to come up with the new class of “dwarf planet.” This new group ended the debate on what really constitutes a planet.

Makemake is the second brightest object in the Kuiper belt, where it is located. Its apparent magnitude is around 17.0. The brightest in the belt is Pluto. A dark moon around Makemake was detected by the Hubble Space Telescope in 2016. It was named MK 2.

Location in the Solar System 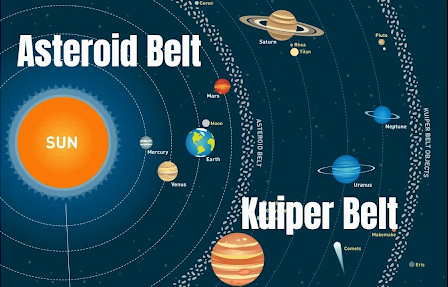 The dwarf planet Makemake is located in the outer bounds of the solar system. As we can see, the inner planets are bordered by the asteroid belt. This region has only one dwarf planet, Ceres. Situated further from the Sun are the giant planets. After these planets is a region similar to the asteroid belt called the Kuiper belt.

Makemake is in the Kuiper belt. This region, located farther away in the outer Solar System, is outside the orbit of the giant planet Neptune. It is a circumstellar disc that is wider and more massive than the asteroid belt. This belt is populated by icy and rocky objects of all sizes. We call them Kuiper belt objects (KBO), plutoids, or transneptunian objects. They are traces of the formation of the solar system some 4.5 billion years ago.

The dwarf planets Pluto, Eris, and Haumea are also located in the same region. A relative size comparison reveals that Makemake is about two-thirds compared to the size of Pluto, which is the largest body in the Kuiper belt.

Even though Makemake is the second brightest Kuiper belt object after Pluto, it was discovered only recently. This is most probably because of its high orbital inclination or the tilt of its orbit.

Makemake escaped detection when American astronomer Clyde Tombaugh searched for trans-Neptunian objects around the late 1930s. The search would have spotted it because it was sensitive in detecting objects as faint as magnitude 17. A reason for this might be because at the time of the survey, Makemake was lost in the backdrop of densely packed stars. 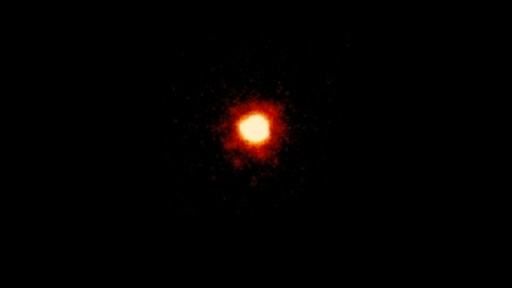 Makemake’s surface has a reddish-brownish color. It has no atmosphere or at least has an incomplete one. The discovery of this unusual atmosphere was observed through occultation.

During an occultation, a planet or another small body moves in front of a star. This causes the light of the star to be blocked from our point of view here on Earth. The star’s light fades off and then fades back on if a passing body is covered by air or atmosphere. In the case of Makemake, it was observed that it has no atmosphere.

However, through the telescope, astronomers noticed some areas of this dwarf planet are patchy. Some areas are brighter than others. This can be an indication that some areas of Makemake are outgassing something. This gas hovers over the surface for some time while the other parts remain airless.

Makemake may or may not develop a thin atmosphere. If it does, it would be mainly of nitrogen near its closest approach to the sun (perihelion). Frozen methane and ethane are more likely present on the surface of this dwarf planet together with tholins, ethylene, acetylene, and propane.

Makemake has no known rings and the presence of a magnetosphere is still not known. The possibility of life on this dwarf planet is highly unlikely because of its extremely cold temperature. It has an average temperature of about -406 degrees Fahrenheit (-243 degrees Celsius).

The radius of Makemake is estimated to be 444 miles. It is 1/9 as large as the Earth’s radius. It is approximately four billion miles from the Sun. In terms of the astronomical unit (AU), or the distance of the Earth to the Sun, Makemake is 45.8 AU away. With this distance, sunlight takes about six hours and twenty minutes to reach this dwarf planet.

Makemake’s rotation period is quite long considering that it is a dwarf planet. This could be an effect of its satellite’s tidal forces. This dwarf planet makes a complete orbit around the Sun in 305 Earth years.

Only one satellite is related to Makemake. It is designated S/2015 (136472) 1, or more commonly called MK2. This nickname is simply a reference to it being the second object in the Makemake system. 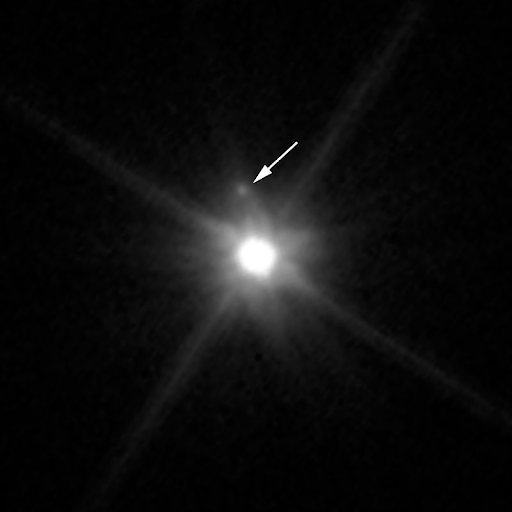 According to Alex Parker of Southwest Research Institute, the orbit of MK2 appears to be edge-on. It can be easily overlooked due to the brighter Makemake. Thanks to Hubble’s Wide Field Camera 3, MK2 was at last observed against the bright glare of its dwarf planet.

The discovery of MK2 was announced in April 2016. This moon is very dark. Its ability to reflect radiant energy is likened to that of charcoal. Its estimated diameter is 110 mi (175 km). The orbital period is around 12 days more or less. 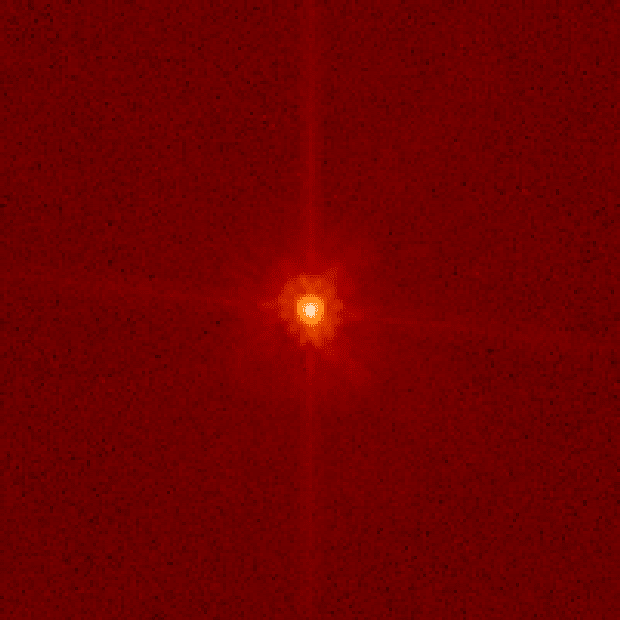