Before we dive right into the detail, here’s some bite size Solar Eclipse facts to get you started!

An eclipse involves the Sun, Earth, and Moon. Sometimes, they align and cause one object to be obscured from the viewer. This is called an occultation when this object is completely hidden. However, if the passing object is much smaller, the third object is only partially hidden. This is called a transit this time.

In ancient times, people interpreted eclipses as a sign that the gods were angry. This natural phenomenon meant a bad omen for them. It came from the Latin word “eclipsis” from the Greek “ekleipsis.” Literally, this means “to fail to appear.” It also means “to leave,” and as people viewed it, it was like being “abandoned” by the gods.

Eclipses happen all the time in the solar system. Here on Earth, the eclipses that we see involve our planet, the Moon, and the Sun. Sometimes it can involve a spacecraft too. When three or more objects like these are aligned, we call it syzygy.

We get two types of eclipses, the solar and the lunar eclipse.

The main difference between these two types of eclipses is whether the Moon or Earth passes in the middle. If the Moon is in the middle, then it’s a solar eclipse because the Sun is obscured from our line of light. If the Earth is at the center, then it’s a lunar eclipse. The Earth blocks the light from the Sun, thus casting its shadow on the Moon.

What Is a Solar Eclipse?

A solar eclipse happens when the Moon is between the Earth and the Sun. Because of that, the Moon casts a shadow on some parts of the Earth. The Sun seems to be hidden in such places for some time. It only occurs during a new moon phase when the three are aligned.

The umbra is the dark core of the shadow of the Moon. It gets smaller as it approaches the Earth. People in the location where the umbra falls will witness a total solar eclipse.

The penumbra is the lighter part of the Moon’s shadow. Unlike umbra, it becomes bigger as it reaches the Earth. People will experience a partial solar eclipse where the Moon’s penumbra falls.

Antumbra is also a lighter part of the Moon’s shadow, but it is more like the extension of the umbra. This happens when the Moon is farthest from the Earth (apogee). Because of the distance, the umbral shadow does not reach the Earth. What reaches us instead is the Moon’s antumbra which causes an annular solar eclipse.

Why We Don’t Get Solar Eclipses All the Time

Our Moon orbits the Earth every 27 days but solar eclipses do not happen all the time. The reason for that is the Moon’s tilted orbit. It is not aligned with the Earth and the Sun all the time. Sometimes it passes above or below the Earth’s plane. There are times when it does line up and that’s when we experience a solar eclipse.

The different types of solar eclipse depend on how well the Moon covers the Sun in our view. Sometimes it completely blocks the Sun’s disk, sometimes only parts of it are covered.

The distance between the Moon and Earth also affects the type of eclipse that we get. But as always, looking directly at the Sun can cause eye damage. We should use a safe solar filter to witness and enjoy this memorable event.

As we know, the Sun is much bigger but the Moon can cover it entirely during a total solar eclipse. The reason for this is distance. The Sun is about 149 million km (93 million miles) away from us but the Moon is only around 384,400 km (239,000 miles).

Since the Moon is closer to us, it appears to be just the same size as the Sun. Because of that, it can completely block the solar disk when they are perfectly aligned.

However, this is not the case all the time. The Moon’s orbit is not a perfect circle so there will be times when it will be farther away from Earth. As the distance increases, it will also appear smaller so will not be able to completely cover the Sun. It’s things like these that determine what type of solar eclipse we get.

The three main types of solar eclipse are total, annular, and partial. Sometimes we get a combination of these types, called a hybrid eclipse.

Since the Earth and the Moon are moving, the path of totality moves across our planet at around 2,253 km per hour (1,400 mi per hour). Direct light from the Sun is hidden and we will experience darkness like it is already nighttime.

Only the much fainter solar corona is visible during a total eclipse. This is the only time when it is safe to look directly at the Sun because it is completely blocked.

If we get lucky, we can also spot Baily’s beads effect. Also called the diamond ring effect, it can also happen during an annular eclipse.

The Baily’s beads effect is an interesting feature before and after a solar eclipse. Just before the Moon completely covers the Sun, some beads of sunlight are still visible in some areas while not others. This is because of the rugged edge of the Moon’s surface caused by features like mountains and craters.

This is when the Moon and the Sun are both exactly in line. However, either the Moon is further from Earth or the Earth is closer to the Sun. When this happens, the apparent size of the Moon is smaller than that of the Sun. Because of that, it is not able to cover the Sun entirely.

The Sun then appears as a very bright ring, or annulus, surrounding the dark disk of the Moon. This annulus is often called the “ring of fire” because of its appearance. Also, because of the distance, the antumbral shadow reaches the Earth instead of the penumbra. We should wear solar filters during an annular solar eclipse.

This is when the Moon does not line up completely with the Sun. It only partially blocks the sunlight from reaching Earth.

A hybrid solar eclipse is the rarest of the four types. It is called “hybrid” because it combines annular and total eclipse when it happens.

This kind of eclipse occurs when the umbral shadow touches some areas of the Earth’s surface but falls short on the other. Because of that, observers will see an annular or total eclipse depending on their location.

The difference is caused by the Earth’s curvature. The moon is closest in the zenith position so the umbra still reaches the surface. This results in a total solar eclipse.

However, as the Moon moves, the distance increases along the curvature of the Earth. The Moon no longer covers the Sun’s disk entirely. Also, the umbra falls short and the antumbra reaches the surface. It results in an annular solar eclipse.

Solar eclipses are an exciting event. However, we should always practice caution. Even though the Sun is partially blocked, its rays are still harmful to our eyes. Never look at it directly because it can damage your retina or even cause blindness.

The only time it is safe to look directly at the Sun is during a total solar eclipse because it is completely obscured. During annular, partial, or even hybrid solar eclipses, we have to use a Sun filter or eclipse glasses. We can also use a number 14 welder’s glass instead.

Do not use regular sunglasses or even homemade filters. Also, it is not good to look at it through cameras, binoculars, and even telescopes. If you use solar filters, make sure to check for damage. where you can see any scratches on it, use another one instead.

If you do not have any solar filters or eclipse glasses, you can still observe this amazing event by using a pinhole projection. We can also magnify the Sun in our projection using a pair of binoculars. We will only use it for magnification, not for direct viewing. It does not filter out the Sun’s rays so it does not protect us from retinal burns.

We can see around two solar eclipses every year. In 2021, an annular solar eclipse occurred on June 10 and the last one will be on December 4. The last event will be a total solar eclipse.

In the next three years, we can expect to see a combination of total and annular solar eclipses. Interestingly, we can mostly wait for them around April and October.

The first solar eclipse of 2022 will occur on April 30. This will be a partial eclipse that will be observable in South America and some parts of the Pacific. The next event of the year is also a partial solar eclipse. On October 25, it will be visible across Europe, northeast Africa, West Asia, and the Middle East.

Later that year, on October 14, an annular solar eclipse will be visible in the western part of the US, Central America, Brazil, and Colombia. Meanwhile, its penumbra will fall on some parts of North, Central, and South America. Observers there will witness a partial solar eclipse.

In 2024, a total eclipse in April will be observed over the continental US, the eastern part of Canada, and Mexico. Totality will last for about 3 to 4 minutes depending on location. It will be observed partially in some places in North and Central America. On October 2, an annular event will be observed in Chile and Argentina. A partial solar eclipse will fall around the Pacific and other areas of South America.

NASA has made a guide to help us see the path that these solar eclipses will take in the coming years. 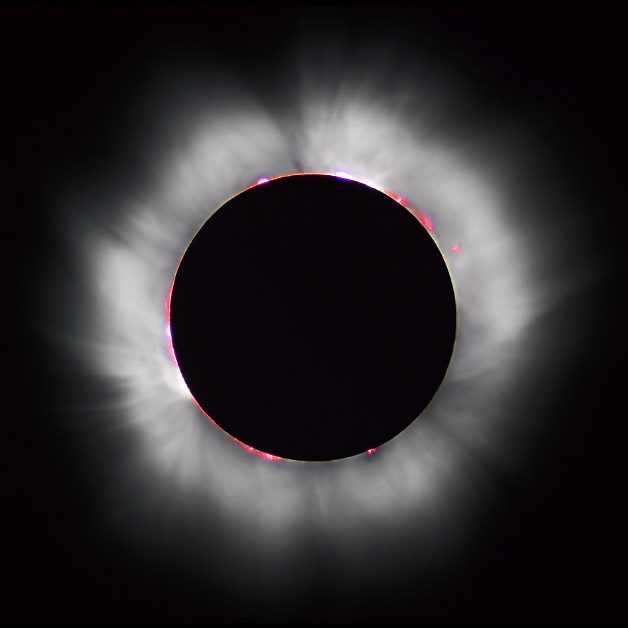 We use cookies on our website to give you the most relevant experience by remembering your preferences and repeat visits. By clicking “Accept All”, you consent to the use of ALL the cookies. However, you may visit "Cookie Settings" to provide a controlled consent. We use your personal data / cookies, for personalisation of ads and that cookies may be used for personalised and non-personalised advertising. Read more on our privacy policy here
Read More
Accept Reject All
Manage consent

This website uses cookies to improve your experience while you navigate through the website. Out of these, the cookies that are categorized as necessary are stored on your browser as they are essential for the working of basic functionalities of the website. We also use third-party cookies that help us analyze and understand how you use this website. These cookies will be stored in your browser only with your consent. You also have the option to opt-out of these cookies. But opting out of some of these cookies may affect your browsing experience.
Necessary Always Enabled
Necessary cookies are absolutely essential for the website to function properly. These cookies ensure basic functionalities and security features of the website, anonymously.
Functional
Functional cookies help to perform certain functionalities like sharing the content of the website on social media platforms, collect feedbacks, and other third-party features.
Performance
Performance cookies are used to understand and analyze the key performance indexes of the website which helps in delivering a better user experience for the visitors.
Analytics
Analytical cookies are used to understand how visitors interact with the website. These cookies help provide information on metrics the number of visitors, bounce rate, traffic source, etc.
Advertisement
Advertisement cookies are used to provide visitors with relevant ads and marketing campaigns. These cookies track visitors across websites and collect information to provide customized ads.
Others
Other uncategorized cookies are those that are being analyzed and have not been classified into a category as yet.
Save & Accept