Galaxies can range in size from a dwarf with as few as ten million stars to massive giant galaxies with a hundred trillion stars. Each star orbits its galaxies own centre of mass and it is estimated that there are more than 170 billion galaxies in the observable universe. Let’s dive in to explore many more galaxy facts!

There are about 170 billion galaxies in the observable universe. Each of these galaxies has different stories to tell when it comes to their origins. So how do galaxies form?

Let’s start by taking a look at the universe. According to astronomers, everything started with the Big Bang. This theory states that the universe started as a hot single point that expanded and cooled down. It is a very long process that started 13.8 billion years ago. And even now it is still expanding!

The universe is so big that light from distant galaxies takes millions or even billions of years to reach us. By the time it reaches us, what we actually see is what it looked like in the past. That is the reason why nearer galaxies look more developed than those farther from us. Figuratively, the further we look into space, the more we go back in time. 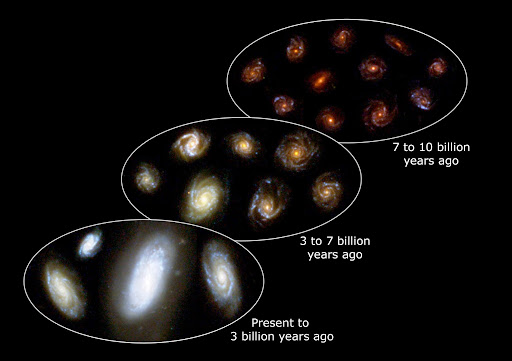 The galaxies have long been here before us so thinking about how they came to be is quite a challenge. However, astronomers have some explanations about it by looking at their evolution.

According to one theory, the universe started mainly with the light elements hydrogen and helium. Some areas became denser until more particles accumulated into swirling clouds. As these clouds grew bigger, they started to collapse because of gravity. They merge with other clouds and become even bigger. As they swirled and merged, the clouds continued to collapse and formed the stars.

Another theory holds that the stars were formed first before the galaxies. It could be that the collection of dust and gas gave birth to stars and then those stars started to form groups or star clusters. These globular clusters continued to merge with other clusters, becoming the bigger galaxies we know today.

Until now, the galaxies are still interacting and evolving. We have seen some that are in the process of merging, and usually, the bigger ones gobble up the smaller galaxies. In fact, our Milky Way galaxy has swallowed about 12 galaxies already. Also, it is projected to collide with its largest spiral neighbor, the Andromeda Galaxy, roughly 4.5 billion years from now.

Studying the Andromeda Galaxy established the presence of dark matter. American astronomer Vera Rubin found out that the galaxy’s movement seemed to go against Newton’s Laws of Motion.

Since most of the visible matter is concentrated near the center, the stuff around it should be moving faster than those at the edges. However, Rubin found out that the galactic materials were orbiting just the same regardless if they are near the center or far in the edges. This led to the conclusion that there must be a non-visible mass that holds the galaxy together—they called it dark matter. 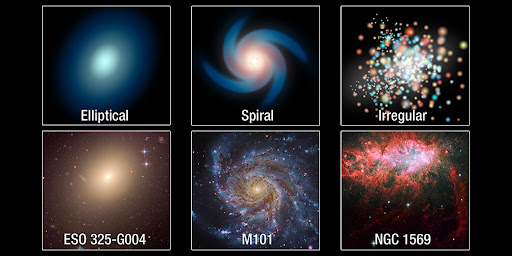 There was a time when we thought that the Milky Way was the only galaxy out there. It changed when the big and bright Andromeda was discovered. However, before it became known as a galaxy, it was previously called the “Great Andromeda Nebula.”

The very nature of these objects became the subject of the Great Debate between Harlow Shapley and Heber Curtis. Shapley believed that “spiral nebulae” like the “Andromeda Nebula” are within the bounds of the Milky Way. Curtis, however, stated that they are independent galaxies.

German philosopher Immanuel Kant coined the term “island universes” to mean that galaxies are separate from each other.

Astronomer Edwin Hubble proved that there are, in fact, galaxies separate from our own. They are classified into three major groups based on their appearance: elliptical, spiral, and irregular. 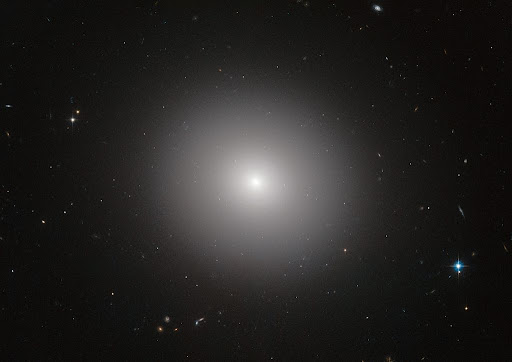 About one-third of all known galaxies are elliptical galaxies. They have an approximately ellipsoidal (elongated) shape and a smooth, nearly featureless image. Most of the stars in these galaxies are older stars. Since they contain little gas and dust, they are not sites of star formation. There are two types of elliptical galaxies: giant and dwarf. 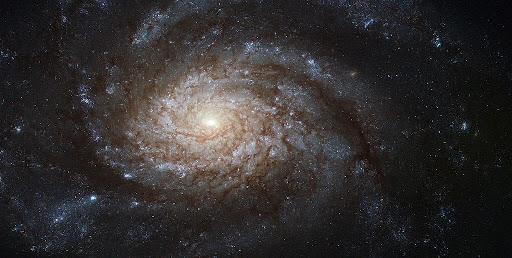 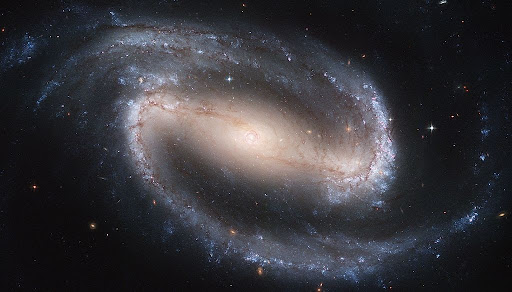 As the name says, spiral galaxies look like flat spinning disks with curving arms, like a pinwheel. This type accounts for two-thirds of all known galaxies. Aside from the arms, another notable thing about spiral galaxies is their distinct bulges in the center.

Young stars populate the spiral arms of these galaxies while the older ones are around the galactic center. Galaxies of this type can either be normal or barred. 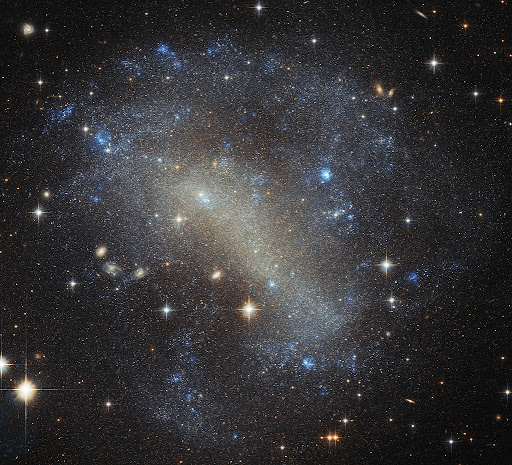 Galaxies that do not classify as either elliptical or spiral are called irregular galaxies. They have an abundance of gas and dust which means a lot of young stars are being formed. Irregular galaxies do not have distinct shapes. The reason for this irregularity is often because of the gravitational influence of neighboring galaxies.

Galaxies that are intermediate between ellipticals and spirals are called lenticular galaxies. They look like “lenses” and have rotating disks of stars without spiral arms. 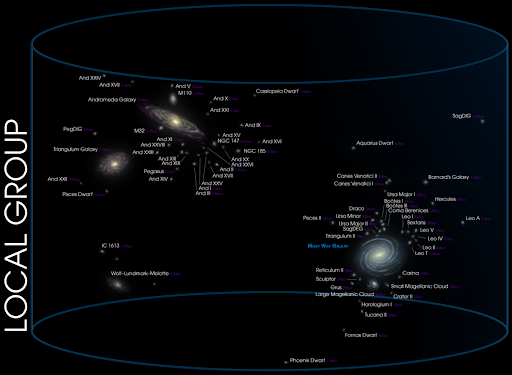 The universe is so big that we will not be able to see its entirety. Because of that, we have the term “observable universe.” This is the part of the universe that we can observe and confirm from Earth. Just like how we can find places on Earth based on what’s nearby, we can also spot our location in the universe, locally speaking.

Dwarf galaxies are small galaxies with low mass and low luminosity. Galaxies of this type are the most common in the Local Group. Usually, these dwarf galaxies act as satellites to the bigger ones.

In the Local Group, there are a lot of these dwarf galaxies that orbit the three largest members. Compared to the billions of stars in bigger galaxies, there are only about hundreds to a few thousand stars in dwarf galaxies. 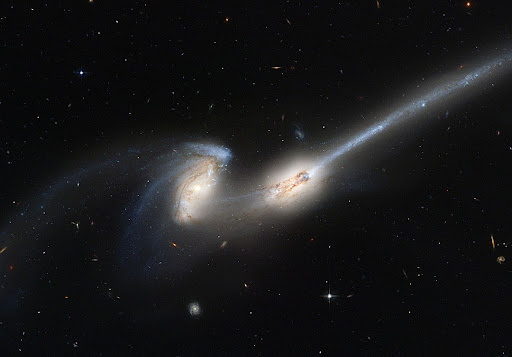 Galaxy collisions and mergers are not uncommon events. This galactic dance takes millions of years so we cannot watch it unfold before our very eyes. However, computer simulations can help us see what such an event would be like.

Galaxies that belong to the same groups and clusters mean that they are relatively close to each other. Because of that, their gravity can affect those that are near them and vice versa. Since dwarf galaxies have weaker gravitational pull than bigger galaxies, they are usually swallowed by the larger ones.

Sometimes, a galaxy can resist the pull of another and a collision is avoided. However, the two can still have an effect on each other. The force of gravity between these two galaxies can still distort their shapes and appearance.

Even if collisions and mergers sound like a scary thing, the stars in a galaxy are spread apart. Astronomers say that there is a very low chance of stars smashing against each other when that happens.

Instead, what is sure is that new stars will form as materials from two interacting galaxies combine. With that said, the Solar System will be safe when the Milky Way and Andromeda Galaxy finally collide in the far future. 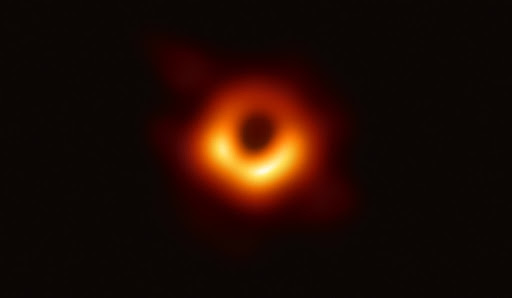 Albert Einstein’s theory of general relativity introduced the possibility of black holes. However, even Einstein himself had doubts about its existence. In 2019, the first image of a black hole’s shadow was taken which proved that black holes are very real.

Black holes are very powerful fields that not even light can escape. Most of them are remnants of massive stars that have died. So, is there always a black hole in the middle of every galaxy?

It is believed that almost every large galaxy has a black hole in the galactic center. Even the Milky Way has one. They are thought to be at the center of every galaxy because such powerful forces may be responsible for pulling the material that started the creation of galaxies.

Black holes swallow everything close to them. With that, it consumed whatever was near. Those that were beyond its reach started to spin around it, forming a new galaxy.

But why are black holes so powerful? It is because it packs so much in such a small size. It is estimated that central black holes are about 1/1000th the mass of their host galaxies.

Black holes become dormant or inactive when no stars and other objects are near. The supermassive black hole of the Milky Way, located in Sagittarius A*, is thought to have been dormant for a long time. However, strong flares were detected from it in 2019 may indicate something more.

There appear to be no black holes in the Small Magellanic Cloud and the Large Magellanic Cloud. Still, it does not rule out the possibility that they may have one, just undetected because they are too small.

Here, we have selected a few of the more prominent or important Galaxies (from an earthling’s perspective) – each linking out to their own guide full of specific galaxy facts. 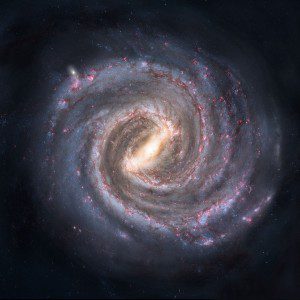 The Milky Way is the galaxy that contains our solar system. The name “milky” is derived from the Greek word galaxias. It describes the galaxy’s appearance as a dim glowing band that arches across the night sky making individual stars indistinguishable to the naked eye. 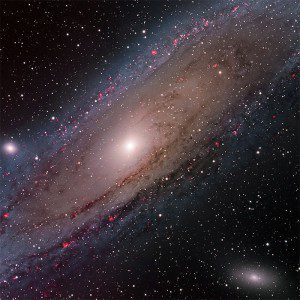 The Andromeda Galaxy, also known as Messier 31 or M31, is a spiral galaxy located about 2.5 million light-years (2.4×1019 km) from Earth. Located in the Andromeda constellation, it is the closest spiral galaxy to the Milky Way, where our solar system is. It is also the largest galaxy in the Local Group. 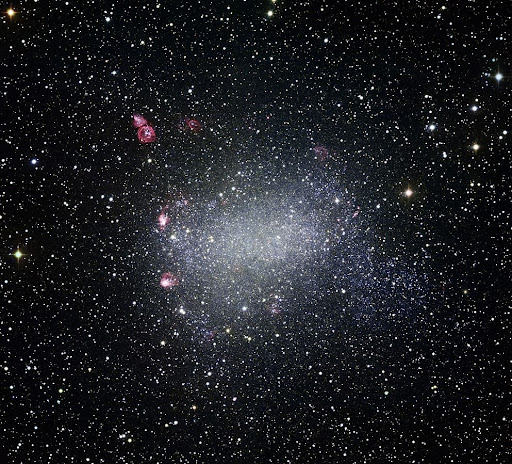 There are smaller galaxies than our own are known as dwarf galaxies. One of them is Barnard’s Galaxy, also known as NGC 6822. This dwarf irregular galaxy is one among the Milky Way’s galactic neighbors. 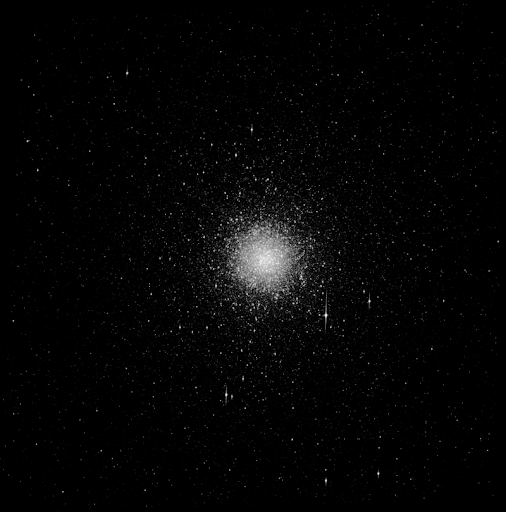 An elliptical galaxy is a type of galaxy with an approximately ellipsoidal shape and a smooth, nearly featureless image. One of these is the Sagittarius Dwarf Spheroidal Galaxy, also known as the Sagittarius Dwarf Elliptical Galaxy. It is around 10,000 light-years in diameter and is currently located about 70,000 light-years from the Solar System. 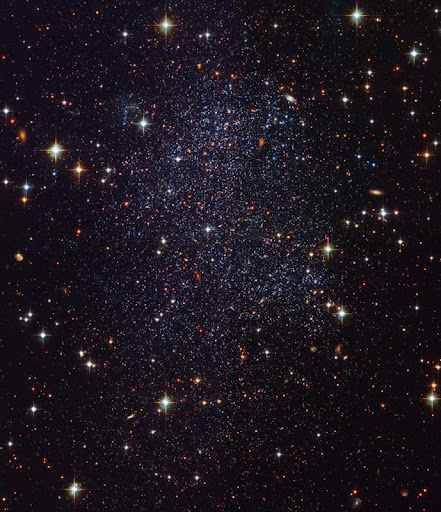 An irregular galaxy is a galaxy that does not have a distinct regular shape, one of these is the Sagittarius Dwarf Irregular Galaxy, also known as SagDIG, is a dwarf galaxy in the constellation of Sagittarius 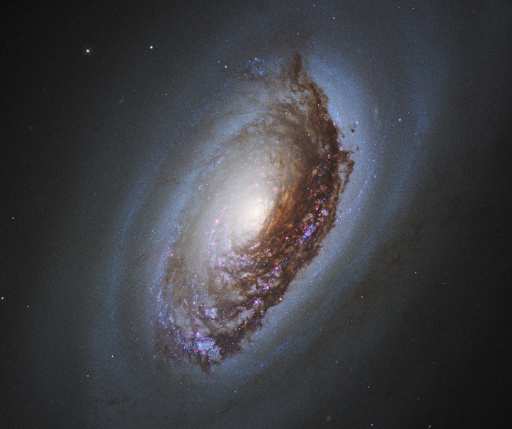 A spiral galaxy that is famous for the dark band of absorbing dust that lies in front of the galaxy’s bright nucleus (relative to Earth). The Black Eye Galaxy is a relatively isolated spiral galaxy 17 million light-years away in the mildly northern constellation of Coma Berenices 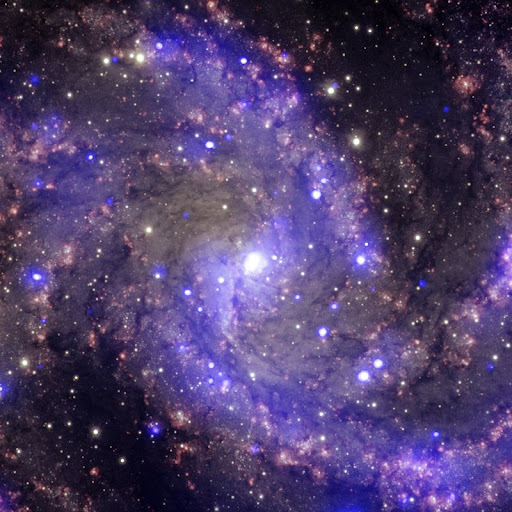 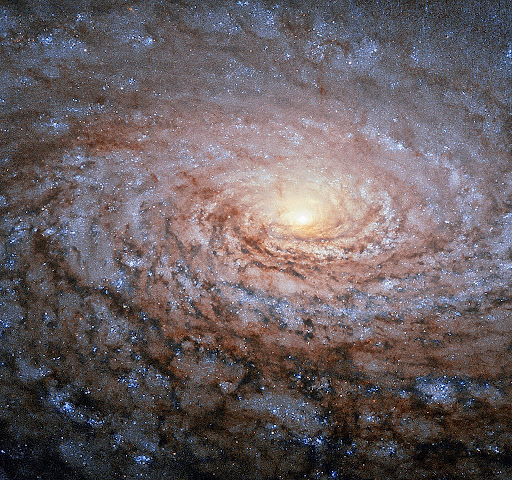 If you liked our post on Galaxy facts, why not check out our post on 50 incredible space facts!