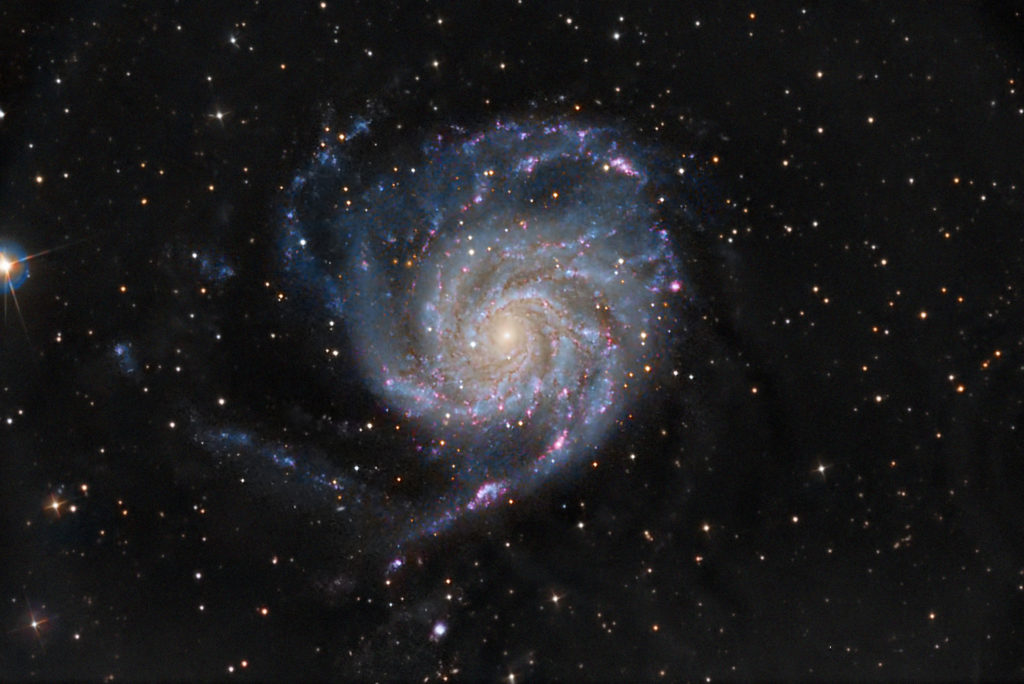 The Pinwheel Galaxy is one of many Spiral galaxies in the Universe. Like other galaxies of this type, the Pinwheel Galaxy is a star producer. There are more than 3,000 places in its arms where stars are born. These areas are known as “HII regions.” HII regions are named because of the huge amounts of the element Hydrogen that exists in them. These huge amounts of hydrogen gas exist because stars are mainly made up of hydrogen and helium.

The middle of this Galaxy is called the “central bulge.” It’s mass is thought to be equal to about 3 billion suns. Unlike the spiral arms of the Pinwheel Galaxy, very few stars are produced in the central bulge.

When stars die they produce a brilliant explosion known as a supernova. They may be so bright that they block other galaxies. Supernovas are the source of most of the heavy elements in the universe. Scientists have recorded at least four supernovas taking place in the Pinwheel Galaxy, with the last one in 2011. A Romanian astronomer reported a luminous red nova in the Pinwheel Galaxy in 2015. A red nova is the result of the explosion that takes place when two stars collide and become one.

The Pinwheel Galaxy has an unusual shape that is caused by gas and light clouds between two large and closely orbiting stars. In 2006 NASA and the European Space Agency released the biggest and most detailed photo ever taken of a galaxy. This image was taken by the Hubble Telescope that was launched into earth’s orbit in 1990. According to NASA, the image includes several layers and is like looking at the galaxy with nigh-vision goggles, an ultra-violent camera, x-ray vision and a regular camera at the same time.