NASA describes a “nebula” as an area of space containing scattered dust and gases. Typically, the gases in a nebula include large quantities of Helium and Hydrogen. If you’ve studied Chemistry already, you recognize Hydrogen and Helium as the first and second elements in the Periodic Table. Chemists sometimes use the abbreviation “H” for Hydrogen and the abbreviation “He” for Helium. Astronomers frequently need to discuss more than one nebula. They use the plural form “nebulae” in this situation. Some scientists believe the Trifid Nebula actually consists of several different types of regions. 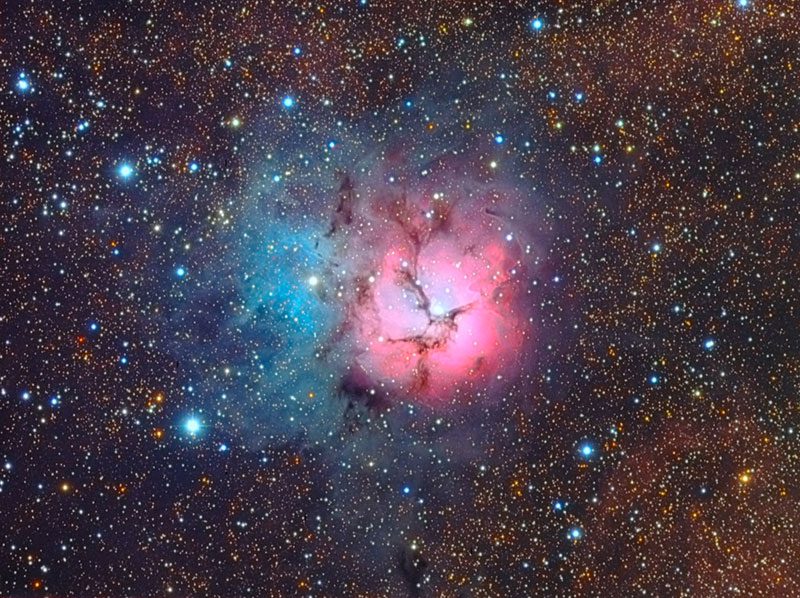 Studying the Trifid Nebula poses many challenges. For one thing, it lies in a very distant region of space. Since a single light year equals nearly 6 trillion miles, an object in space located 9,000 light years away remains very remote. People cannot even see the Trifid Nebula in the night sky without the assistance of a telescope.

On the other hand, human beings have observed many of the stars located near the Trifid Nebula for centuries. Early civilizations often used the stars in the night sky as a form of roadmap to assist travelers in journeying from one place to another. People referred to star groupings or patterns in order to identify north, south, east, and west more effectively. They described these outlines as star “constellations“.

Today, many modern people recognize the Sagittarius Constellation because of its close association with the sign of Sagittarius in the western Zodiac. During the period of the Roman Empire, a famous scholar named Ptolemy identified 48 constellations, including Sagittarius. He described Sagittarius as a centaur archer drawing back a bow and arrow. A centaur was a mythical creature with the upper body of a man and the four legs of a horse.

An important central spiral of the “Milky Way” crosses into part of Sagittarius. Many people consider this eye-catching region of space incredibly beautiful because of its dense population of bright stars. Yet despite their familiarity with the Sagittarius constellation, ancient stargazers lacked the tools required to spot the Trifid Nebula.

Interesting Facts About The Trifid Nebula

Today, NASA scientists believe the Trifid Nebula (until very recently, at least) served as a star-forming location in space. As a “star nursery”, it provides the conditions required for the formation of new stars. Scientists hope to learn more about this complex process in the future. Many unanswered questions still arise concerning the formation and the destruction of stars.

Yet astronomers have discovered important information about the Trifid Nebula. In 1997, they used the Hubble Space Telescope to take images of this region of space. They studied the results closely. They learned that the gases in the Trifid Nebula star nursery consist largely of Hydrogen, Sulfur, and Oxygen. Additionally, they detected a huge recently formed star in the Trifid Nebula. It possesses 20 times the mass of Earth’s sun and maintains a sizzling hot surface temperature in excess of 30,000 Kelvins! Scientists gave this heavy star the name “HD 164492A”. An additional group of approximately 3100 other very young stars lie within the same part of the Trifid Nebula.

The powerful radiation within this very scenic part of space remains a topic of interest to NASA scientists. They classify the massive HD 164492A star and its neighbors as type “O” stars, meaning these young stars shine in a distinctive blue color. Most newly formed stars fall into the O spectral class. By contrast, our own planet’s star, the Sun, carries a spectral color classification of “G” (meaning it shines with a yellow light).

Who Discovered The Trifid Nebula?

Today, one of the ways NASA scientists refer to the Trifid Nebula reveals some key information about its discovery. Instead of describing it by its full name, astronomers sometimes simply refer to this nebula as “M20”. An interesting story lies behind this shorthand.

The abbreviation “M20” stands for “Messier 20”. Shortly before the outbreak of the American Revolution, a young French astronomer named Charles Messier began searching the night sky in Paris seeking to discover new comets. He used a four-inch telescope to enhance his view of the stars. Together with an assistant, he compiled a list of shining items he wanted to distinguish from comets. These “objects” included galaxies, star clusters, and nebulae. Between 1774 and 1784, he catalogued 103 of these so-called objects, including the Trifid Nebula. After his death, astronomers recognized Charles Messier by naming the Messier Crater on the Moon in his honor. Many astronomers still refer to the nebulae he discovered by Messier numbers.

Does The Trifid Nebula Consist of Different Regions?

Some astronomers have noticed the Trifid Nebula appears to consist of several different regions. A star “nursery” apparently occupies the clear central area of the Trifid Nebula. In some colorized images, thicker dust and gas clouds appear evident as the eye moves towards the outside of the nebula.

Scientists believe understanding these changes may yield clues to star formation. This process remains poorly understood. It could provide useful information about the universe!