Size of Jupiter compared to the Earth

In our  guide, we will explore some of the most interesting facts about Jupiter. From its abundant moons, the red spot to the composition of the atmosphere and weather on Jupiter. We will explore if Jupiter really was a failed star and much more. So let’s get started with our Jupiter facts!

Jupiter has 67 confirmed moons orbiting the planet. These moons are separated into three groups:

More information about the moons of Jupiter

Get a load of these cool Jupiter facts!

What is even more provocative is the theory that Jupiter is a failed star. Current scientific knowledge suggests that if Jupiter had, in fact, been roughly 80 times more massive, nuclear fusion would have taken place in its core; thus, Jupiter would have become a star, not a planet. Regardless, it is still tempting to look at the number of satellites orbiting Jupiter and consider it and its moons as, in many ways, a mini solar system.

Although our scientific knowledge of Jupiter has been greatly expanded as a result of the numerous planetary missions beginning in the 1970s, these missions are unnecessary for viewing the planet’s surface features. Instead, most of these features can be observed using Earth-based telescopes. For example, as recently as 1994, the Hubble Space Telescope provided stunning images of the impact of the Shoemaker-Levy 9 comet into Jupiter.

The vertical dimension (i.e., thickness) of Jupiter’s atmosphere is more difficult to define than those of the terrestrial planets. For example, whereas the lower boundary for the atmosphere on Earth is its solid planetary surface, there is no such equivalent on Jupiter. Essentially, Jupiter’s atmosphere transitions from a gaseous outer zone into the planet’s liquid layer. However, for practical purposes scientists have designated the depth at which the atmospheric pressure equals ten times the pressure at sea level on Earth as Jupiter’s “surface”.

Those layers of the atmosphere visible to Earth-based telescopes are divided into lighter and darker horizontal bands. Scientists believe these bands to be layers of high and low pressure. As a result, storms often develop on the boundaries between two adjacent bands. The Great Red Spot, visible in Jupiter’s southern hemisphere, is one such storm. Amazingly, this storm has raged for centuries and is 25,000 km across— is big enough to hold two Earths!

The composition of Jupiter’s atmosphere is very interesting. At roughly 90% hydrogen and 10% helium, Jupiter’s composition is nearly the same as the Sun’s. The only difference between the two is that the Sun is much more massive than Jupiter. This composition supports the theory that Jupiter could have been a star.

The interior of Jupiter is believed to consist of three regions. The first is a rocky core composed of various elements with a mass between 12 and 45 times that of the entire Earth. The core is surrounded by the second region, a layer of electrically conductive liquid hydrogen. It is due to this layer, which comprises most of the planet’s mass, that Jupiter has such a strong magnetic field. The third region consists of ordinary hydrogen with traces of helium, which transitions into the planet’s atmosphere.

A fascinating property of Jupiter is that it emits more energy than it receives from the Sun. This is due to the planet being so massive. As a result of such a large mass, Jupiter exerts a strong gravitational force on itself, thus resulting in the compression of the planet as a whole. The cumulative effect of all this inward force is the production of a large amount of heat, which is then radiated into space.

With a mean orbital distance of 7.78 x 108 km, Jupiter is, on average, a little more than five times the distance from the Earth to the Sun. This means that it takes about 43 minutes for sunlight to reach Jupiter. Also, Jupiter’s orbital eccentricity of .04838 is fourth largest among the planets, giving it a perihelion of 7.41 x 108 km and an aphelion of 8.16 x 108 km. Jupiter’s year is about 4,333 Earth days in length— that’s about 12 times the length of one Earth year!

Jupiter’s axial tilt of 3.17° is extremely small, second lowest in the Solar System behind Mercury. What this means is Jupiter doesn’t experience seasons at all.

Two things stand out about Jupiter’s rotation. The first is its speed. At just under 10 hours, Jupiter has the shortest rotational period in the Solar System. (Saturn is a close second at 10.7 hours.) This quick rotational speed causes the planet to bulge near its equator, making it less spherical than most of the other planets. The second stand-out characteristic of Jupiter’s rotation is that different parts rotate at different speeds. This is due to Jupiter’s not being a solid body. For example, the polar atmosphere rotates about 5 minutes more slowly than that found at the equator.

Although the rings of Saturn are well-known, it is uncommon to hear anything about Jupiter’s rings. Nevertheless, Jupiter does have a ring system. Jupiter’s rings are lesser known than Saturn’s (or even Uranus‘) because they are primarily composed of dust, which makes them difficult to see. The formation of these rings is believed to have come about through Jupiter’s gravity having captured material ejected from its moons.

Here’s one of my favorite Jupiter facts. Recently the Hubble Space Telescope captured an amazing event on the North Pole of Jupiter. As you can see from the image below, Jupiter, like Earth, has an Aurora ( Northern Lights ) which instead of a mystical green like on Earth, appears to be an electric blue color.

Jupiter’s Aurora is a stunning electric blue whirl, which is actually ultraviolet. This means that you would not be able to see it as it is shown in the image above which is a composite image.

What Color Is Jupiter?

The outer atmosphere on Jupiter that we see, is a mix of brown, white, orange, yellow and red. This mix of color is caused by upswelling and surging of a mix of gases such as Helium and Hydrogen, with crystals of amonia and ice as well as other elements. As these come into contact with ultra violet light, these belts of swirling color are exposed.

How Big Is Jupiter?

Does Jupiter Have A Surface?

No, Jupiter does not have a solid surface. The planet is made up of layers of Gas (mostly Hydrogen and Helium) that get more and more dense and pressurized as you approach the hot core.

When Was Jupiter Discovered?

Jupiter has been known since the ages of antiquity. The first recorded sightings were by the ancient Babylonians who were keen astronomers. This was as far back as the 7th or 8th century before the common era.

What Is Jupiter Made Of?

The composition of Jupiter is remarkably similar to that of the Sun. This adds fuel to the debate over whether Jupiter was a failed star. Hydrogen and Helium make up the bulk of Jupiter (99%), in various states of gas and then liquid as pressure increases the deeper you get.

The remaining 1% is made up of a variety of other trace elements. The atmosphere is known to contain a variety of compounds including hydrocarbons, water vapor and ammonia. 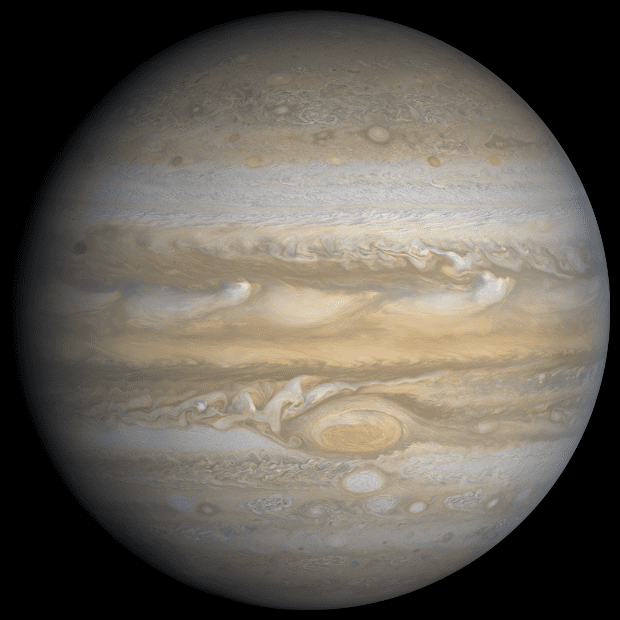