Size of Uranus compared with the Earth

Uranus has the distinction of being the first planet discovered in modern history. Actually, its discovery as a planet almost did not happen. In 1781, the astronomer William Herschel was charting the stars found in the Gemini constellation when he observed a disk-like object. His initial conclusion was that he had discovered a comet and reported his findings as such to the Royal Society of England. However, Herschel was puzzled when he calculated the object’s orbit. Instead of the more elliptical path occurring with comets, he found that it was much more circular. This observation, which was confirmed by other astronomers at the time, led Herschel to conclude that he had, in fact, discovered a new planet. Shortly thereafter, it was widely accepted that Herschel had discovered an unknown planet.

As a result of his discovery, Herschel was given the privilege of naming the new planet. The name he chose was Georgium Sidus, which is latin for Georgian Planet. He opted for this name to honor then king of England, George III. This name, however, was not widely accepted, and as a result others began to suggest names. The name Uranus was put forth in the tradition of naming planets after deities in Roman mythology. Over time the scientific community accepted this as the planet’s name.

At present, the only planetary mission to visit Uranus is Voyager 2. This lone encounter, which occurred in 1986, provided a large amount of data and discoveries. The spacecraft took thousands of pictures of Uranus and its moons and rings. Although the images of the planet showed little other than the uniform blue-green color seen from Earth-based telescopes, other images revealed the presence of ten previously unknown moons and two new rings. At this time, no future missions are scheduled for Uranus.

Due to its stark blue appearance, the Uranian atmospheric patterns have been much more difficult to observe than, say, those of Jupiter or even Saturn. Fortunately, the Hubble Space Telescope has provided much more insight into the structural nature of Uranus’ atmosphere. Through more advanced imaging technologies than Earth-based telescopes or Voyager 2, Hubble has shown that there are latitudinal bands much like those found on the other gas giants. Additionally, the winds associated with these bands can blow in excess of 576 km/hr.

The reason behind the monotonous atmospheric appearance is the composition of the top-most layer of the atmosphere. The visible cloud layers are composed primarily of methane, which absorbs those visible wavelengths corresponding to the color red. Thus, the reflected wavelengths are those of blue and green.

Beneath this outer methane layer, the atmosphere is composed of roughly 83% hydrogen (H2) and 15% helium with trace amounts of methane and acetylene. This composition is similar to that of the other gas giants. Uranus’ atmosphere is drastically different in another regard, though. Whereas Jupiter and Saturn’s atmospheres are primarily gaseous, Uranus’ contains much more ice. This indicates that the Uranian atmosphere is extremely cold. In fact, at approximately -224° C, its atmosphere is the coldest found in the Solar System. What is even more interesting is data indicates that this extreme temperature is constant globally, occurring even on the side that is not sunlit.

Uranus’ interior is thought to consist of two layers: a core and mantle. Current models suggest that the core is primarily composed of rock and ice and is approximately .55 times the mass of the Earth. The planet’s mantle is believed to be 8.01 x 1024 kg, or about 13.4 times the mass of the Earth. Furthermore, the mantle is composed of water, ammonia and other volatile elements. What distinguishes Uranus’ mantle from those of Jupiter and Saturn is that it is icy, though not in the traditional sense. Instead, the ice is very hot and thick. The mantle is 5,111 km thick.

What is most surprising about Uranus’ interior and one of the most distinguishing features with respect to the other gas giants is that it does not emit more energy than it receives from the Sun. Considering that even Neptune, which is very similar in size to Uranus, produces approximately 2.6 times the amount of heat that it receives from the Sun, scientists are very intrigued by the low heat that Uranus generates. There are two popular theories for this phenomenon. The first says that Uranus was struck by a large body, dispersing into space most of the heat that planets normally retain from their formations. The second theory claims that there is some barrier preventing the internal heat from making its way to the planet’s surface.

When Uranus was discovered it expanded the radius of the known Solar System by almost a factor of two. What this means is that, on average, Uranus’ orbit is about 2.87 x 109 km. The consequence of such an enormous distance is that it takes sunlight around two hours and forty minutes to reach Uranus—that is almost twenty times as long as it takes sunlight to reach the Earth! This huge distance also means that a year on Uranus lasts almost 84 Earth years!

Perhaps the most interesting thing about Uranus is how odd its rotation is compared to all of the other planets’. The axis of rotation for every planet other than Uranus is roughly perpendicular with their orbital plane. However, Uranus’ axis is tilted almost 98°, which effectively means that Uranus rotates on its side. The result of this is that Uranus’ north pole points at the Sun for half of its year, while the south pole points at the Sun the other half of its year! In other words, it is daytime on one Uranian hemispheres, while it is night time on the other for 42 Earth years at a time. Furthermore, due to this extreme rotation, Uranus does not have days like on other planets—that is, the Sun doesn’t rise and set like on other planets.

The cause for this highly unusual axial tilt is theorized to be the effect of a large body striking Uranus with such force that it essentially knocked the planet over on its side.

Although Saturn’s rings have been well known for some time, it wasn’t until 1977 that the planetary rings surrounding Uranus were discovered. The reason behind this is twofold: their distance from the Earth and their low reflectivity of light. Nonetheless, the Voyager 2 spacecraft identified two more on its fly-by mission in 1986, followed by the Hubble Space Telescope discovery of two additional rings in 2005. The total number of known rings currently sits at thirteen, the largest and brightest of which is the epsilon ring.

What Color Is Uranus?

Uranus has a distinctive pale blue color. The upper atmosphere of water, ammonia and methane ice crystals are the reason for this.

Does Uranus Have Rings?

Yes, Uranus has rings. Thirteen rings to be exact, that we know of so far. The largest and brightest of which is the epsilon ring.

What Is Uranus Made Of?

Uranus is made of a hydrogen and helium upper layer, an icy mantle which surrounds its rock and iron core. It also has an upper atmosphere of water, ammonia and methane ice crystals.

William Herschel discovered planet Uranus in 1781. Uranus can only be seen by the vast majority of people with a telescope or binoculars, so it was too dim to have been seen by ancient civilizations.

How Long Is A Day On Uranus?

A day on Uranus is the same as around 17 hours 14 minutes on Earth. While days are shorter, years are much longer, with 1 year on Uranus taking the same time as 84 years on Earth! 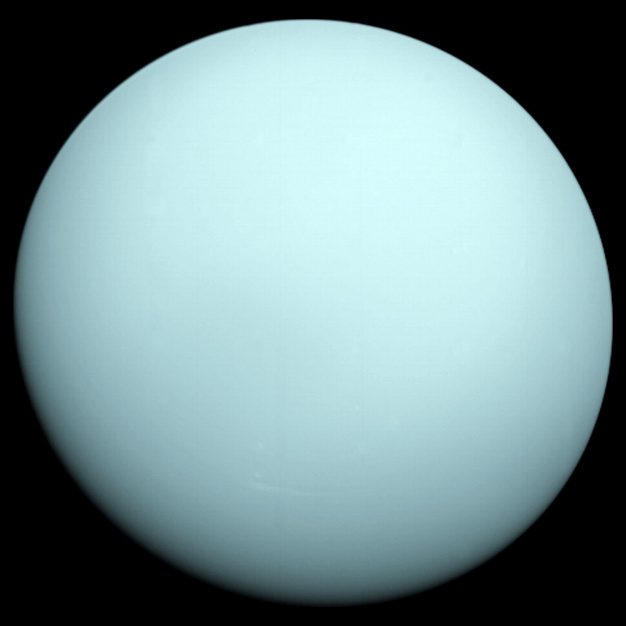