Who discovered the Lagoon Nebula?

In around 1654 an Italian astronomer by the name of Giovanni Hodierna was the first to recognize that the Lagoon Nebula wasn’t a star or comet, and he is credited for discovering it. Later, Charles Messier added it to his catalog to identify and track deep space objects so he could distinguish them from comets. The nebula is also known as Messier 8, or M8 for short. In the “New General Catalogue” or NGC system it’s NGC 6523. The star cluster in the nebula is NGC 6530.

Why is it called the Lagoon Nebula?

The Lagoon Nebula is so named because of the dark band that separates it in two. The darkness looks like a lagoon surrounded by an island of light. There is a denser part of the nebula within the Lagoon that’s called the Hourglass (not to be confused with the other Hourglass nebula). 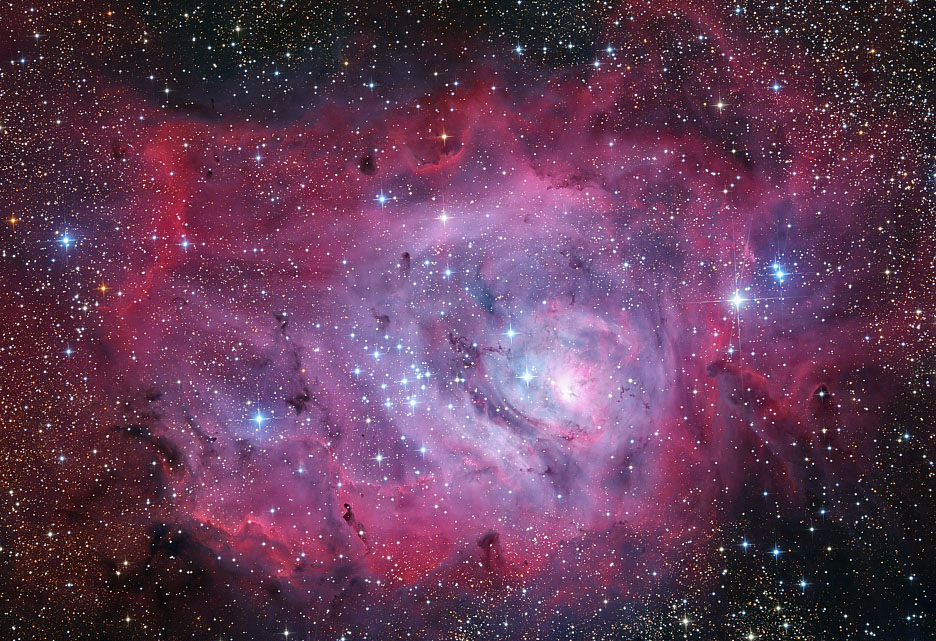 Where is the Lagoon Nebula?

The Lagoon Nebula is visible on very dark, clear nights in mid to late summer. It’s in the Sagittarius constellation above the “spout” of the “teapot”, as Sagittarius is sometimes called. It’s the densest part of the Milky Way because you’re looking towards the center of the galaxy. This area of the sky is very bright and full of nebulae, star clusters, and other deep space objects.

How big and bright is the Lagoon Nebula?

The nebula’s actual size spans an area of 55 x 110 light-years, but since it’s approximately 5,200 light-years from Earth, it appears to people about twice the size of a full moon. It has an apparent magnitude of 6.0, the dimmest magnitude that a person with good eyesight can see. Apparent magnitude is the brightness of an object as seen from earth. The lower the magnitude number, the brighter an object is.

Why does the Nebula glow?

The Lagoon Nebula is classified as an emission nebula, a type of nebula that is made of ionized gases. In the case of the Lagoon Nebula, the gas is mostly Hydrogen. A familiar example of ionized gas is neon signs, where energy is passed through tubes filled with neon so that they light up. Emission nebulae work in the same way; as energy from new stars or dying stars passes through the gas, the cloud lights up. If the energy that’s ionizing the gas is low, like in the Lagoon Nebula, it will appear red.

What happens inside the Lagoon Nebula?

This nebula is one of only two “star nurseries” that you can see without magnification. Nebulae like the Lagoon Nebula are the areas where new stars are formed. The Lagoon Nebula has it’s own star cluster, NGC 6530, where the clouds of gas have contracted until they’re so dense they’ve begun nuclear fusion. When that nuclear reaction starts, a star is born. The resulting energy from these stars is what lights up the nebula.

What are those dark spots in the Nebula?

A region like in the Lagoon Nebula where stars form is known as an H II region. The darker spots in the nebula, including the band that looks like a lagoon, are the densest areas of gas where stars are made. These areas are so dense they don’t allow any light to pass through.

Will the Nebula End?

Although no one can say for sure (because it hasn’t happened yet) it’s possible that eventually the new stars will either use up or blow away all the surrounding dust and gas. When that happens star formation will end. It’s possible that eventually the stars made by the Lagoon Nebula will die and give off the same interstellar materials they began with, and the whole process would start over again!