Size of Saturn compared to the Earth

More information and facts about Saturn

Other than Earth, Saturn is easily the most recognizable planet in the Solar System. The reason for this is obvious. Although the other gas giants possess a planetary ring system, none can match the size or beauty of the one found encircling Saturn.

Saturn is the last of the planets known to ancient civilizations. It is also one of the least understood in modern times. With the Cassini-Huygens planetary mission that is currently underway, scientists hope to not only learn more about Saturn, but also Saturn’s moons and its planetary ring system.

Saturn’s atmosphere is composed of roughly 96% hydrogen and 4% helium, with trace amounts of ammonia, acetylene, ethane, phosphine and methane. It has a thickness of approximately 60 km. In the highest layer of the atmosphere, wind speeds reach 1,800 km/h, easily some of the fastest in the entire Solar System.

Although not as visible as those seen on Jupiter, Saturn does possess a horizontally banded cloud pattern. Furthermore, these bands are considerably wider near Saturn’s equator than those found at Jupiter’s equator. These cloud patterns were unknown until the Voyager missions beginning in the 1970s. Since that time, technology has increased to the point that Earth-based telescopes can now view them.

Another fascinating phenomenon that can be found in Saturn’s atmosphere is the appearance of great white spots. These are storms on Saturn, which are analogous to the Great Red Spot found on Jupiter, though they are much shorter lived. The Hubble Space Telescope observed such a storm in 1990, though it was not present when the Voyager spacecraft had flown by in 1981. Based on historical observations, it appears that these storms are periodic in nature, occurring approximately once per Saturnian orbit.

The interior of Saturn is believed to be extremely similar to Jupiter’s in the composition of its three layers. The innermost layer is a rocky core between 10-20 times as massive as the Earth. The core is encased in a layer of liquid metallic hydrogen. The outermost layer is composed of molecular hydrogen (H2). The only significant difference between the interiors of Saturn and Jupiter is thought to be the thickness of the two outer layers. Whereas Jupiter has a metallic hydrogen layer of 46,000 km and molecular hydrogen layer of is 12,200 km, those same layers on Saturn have a thickness of 14,500 km and 18,500 km, respectively.

Saturn, like Jupiter, emits approximately 2.5 times more radiation than it receives from the Sun. This is due to the Kelvin-Helmholtz mechanism, which essentially creates energy through gravitational compression of the planet due to its enormous mass. However, unlike Jupiter, the total amount of energy emitted cannot be accounted for through this process alone. Instead, scientists have suggested that the planet generates additional heat through the friction of helium rain.

A unique feature of Saturn is that it is the least dense planet in the Solar System. Although Saturn may have a dense, solid core, the large gaseous outer layer of the planet makes its average density a mere 687 kg/m3. As result, Saturn is lighter than water.

The average orbital distance of Saturn is 1.43 x 109 km. This means that Saturn is, on average, about 9.5 times the distance from the Earth to the Sun. The result of such a long distance is that it takes sunlight about an hour and twenty minutes to reach Saturn. Moreover, given Saturn’s distance from the Sun, it has a year lasting 10,756 Earth days; that is, about 29.5 Earth years.

Saturn’s axial tilt of 26.73 is very similar to the Earth’s. Thus Saturn also experiences seasons like the Earth. However, due to Saturn’s distance from the Sun, it receives significantly less solar radiation year-round, and so Saturn’s season are much more subtle than those on Earth.

Much like Jupiter, Saturn is very interesting when it comes to its rotation. Having a rotational speed of roughly 10 hours 45 minutes, Saturn is second only to Jupiter for the fastest rotation in the Solar System. This extreme rotation causes the planet’s shape to take on the shape of an oblate spheroid; i.e. a sphere that bulges near its equator.

A second feature of Saturn’s rotation is the different rotational speeds found between the different visible latitudes. This phenomenon is due to Saturn being primarily gaseous rather than solid.

The ring system of Saturn is the most prominent found in the Solar System. They are composed primarily of billions of tiny ice particles, with traces of dust and other debris. This composition explains why the rings are visible to Earth-based telescopes—ice is very reflective of sunlight.

There are seven broad classifications among the rings: A, B, C, D, E, F, G, each receiving its name in the order it was discovered. The main rings most visible from Earth are A, B and C. Each ring is really just a collection of thousands of smaller rings packed very closely together. Furthermore, between each ring there are gaps. At 4,700 km and occurring between rings A and B, Cassani is the largest of these gaps.

The main rings begin roughly 7,000 km above Saturn’s equator and extend out another 73,000 km. Interestingly, though this radius is substantial, the actual thickness of the rings is no more than about one kilometer.

The most common theory used to explain the formation of the rings is that a medium-sized moon orbiting Saturn broke apart due to tidal forces when its orbit became too close to Saturn. 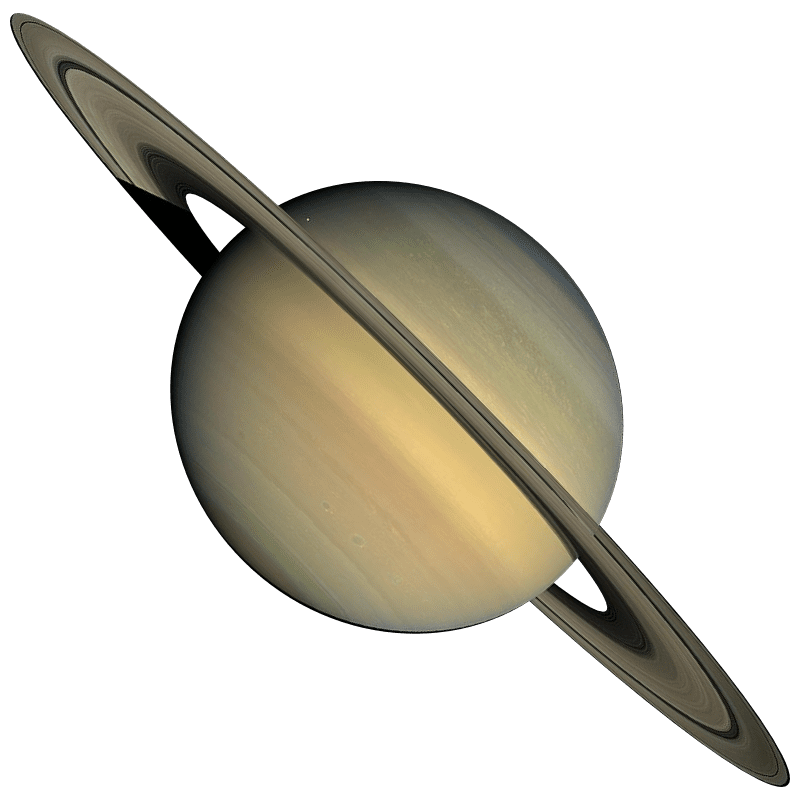