The different phases of the Moon, such as full moon and first quarter moon, are a result of its movement around Earth. It orbits Earth in a counter-clockwise direction. The Moon’s phases make up the 29.5 days lunar cycle.

As we know, everything in the solar system depends on the Sun for light. It is the only object that naturally produces light and energy. The Earth orbits around it and, as it does, it also rotates on its axis. As it rotates, one side of it faces the Sun while the other is in darkness. This is why we have day and night.

The same thing happens with the Moon. It orbits the Earth and rotates it at the same time. However, it is tidally locked. What it means is that its rotation and revolution period takes the same time. As a result, only one side of it faces Earth—called the “near side.”

As the Moon orbits Earth, different parts of it receive sunlight. In short, it experiences day and night just like Earth. Sometimes the near side of the Moon is illuminated, and that is when we see a Full Moon. If the far side is illuminated, it is invisible from our perspective here on Earth.

What is a Full Moon? 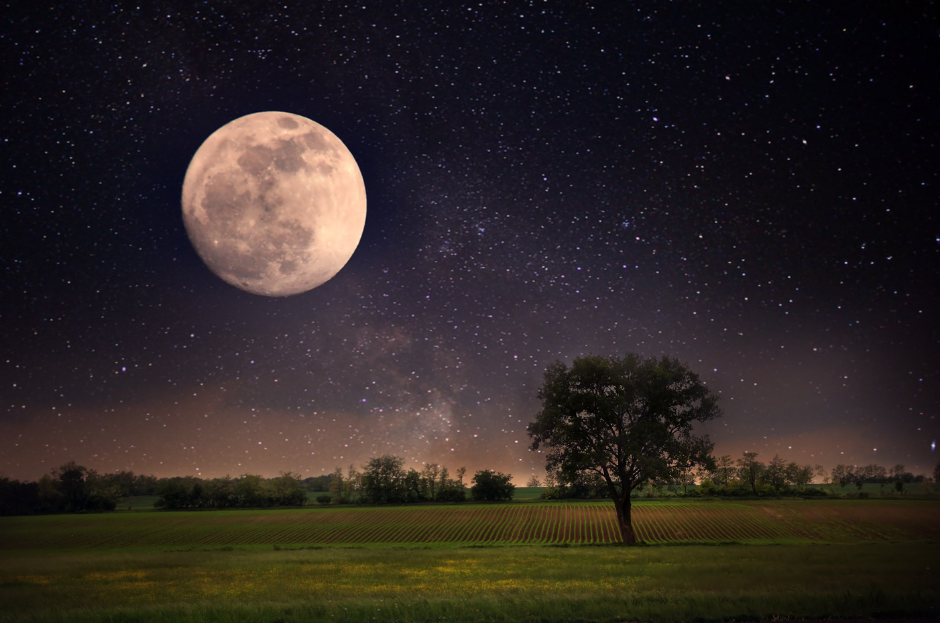 The lunar cycle starts with a New Moon when the night side of the Moon is facing Earth. As it journeys around Earth, it will continue to appear bigger. We start to see a bit of it during the Waxing Crescent phase, half during the First Quarter, and more than half during Waxing Gibbous.

The Full Moon follows after Waxing Gibbous. We can think of it as the opposite of the New Moon. In this phase, the Sun, Earth, and Moon are in a straight line.

The Earth is at the center while the Moon and Sun are on opposite sides. With the Earth at the center, the dayside of the Moon is facing towards us and the Sun. And with that, we can see it fully illuminated. 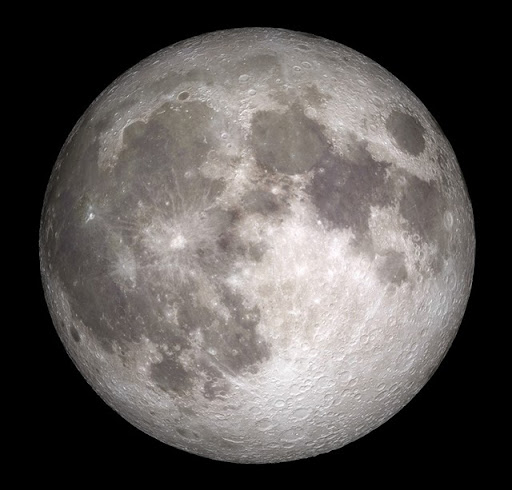 Since everything is moving, technically, a Full Moon does not really last long. The three bodies can align in a couple of minutes and then it is done. Still, generally, the Moon seems to be full for about three days when we can see 98% or more illumination.

That is why, sometimes, it can be challenging to tell if what we see is a Waxing Gibbous, Waning Gibbous, or Full Moon. Interestingly, depending on your location, the exact Full Moon can happen during the daytime.

When Does a Full Moon Occur?

A Full Moon occurs at the fifth stage of the lunar cycle, after Waxing Gibbous and before Waning Gibbous. During this phase, the Moon is already halfway through its orbital path around Earth. It has traveled about 180° already and is yet to make another 180° to complete the orbit.

In this phase, the three bodies are aligned. In a more technical term, they are in syzygy. Another syzygy occurs during the New Moon. 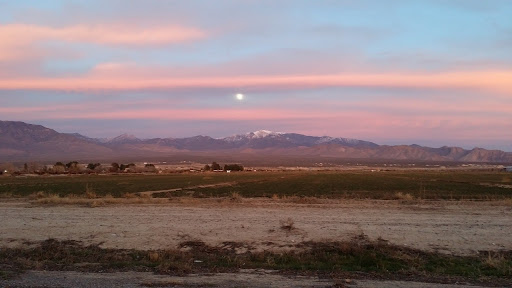 Like the Sun, the other objects in our sky also rise and set below the horizon as seen on Earth. We might associate the Moon only with the night, but it can also be seen in the morning sky—a daytime Moon.

We can see the daytime Moon best during the First Quarter and Last Quarter. During the New Moon, it rises and sets together with the Sun so it gets lost in the solar glare. Following this period, it will rise later.

On a Full Moon, the Moon is in the opposite position as the Sun. That means, they also rise and set at opposite times. A Full Moon rises at sunset (around 6 pm) and the moonset is at sunrise (around 6 am). The Full Moon is visible all night and will be at its highest point in the sky at midnight. 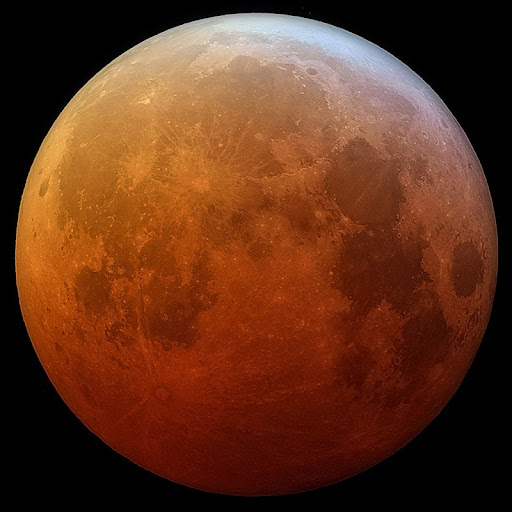 A lunar eclipse happens during syzygy—when the Sun, Earth, and Moon are aligned. When they are perfectly in conjunction, the Earth blocks the Sun and casts a shadow on the Moon. It can be total, partial, or penumbral.

During the New Moon when the three bodies are also in syzygy, a solar eclipse can happen when the Moon totally or partially blocks the sunlight from reaching Earth.

Generally, there are 12 Full Moons in a year. However, since our calendar is not perfectly in sync with the Moon, there will be times when there is an extra one. The 13th Full Moon is called a Blue Moon.

This is where the idiom “Once in a blue moon” came from, which means “rare.” Usually, there is a Blue Moon every two to three years. 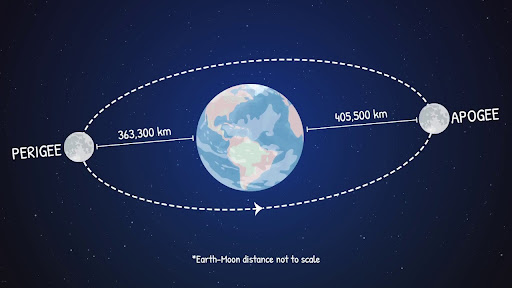 The Moon’s orbit is not a perfect circle but an ellipse. Because of this, some Full Moons can appear smaller or larger than the others. This has something to do with the Moon’s position along its orbit.

Supermoons and Micromoons can also happen during the New Moon. However, we cannot see it during this invisible phase. 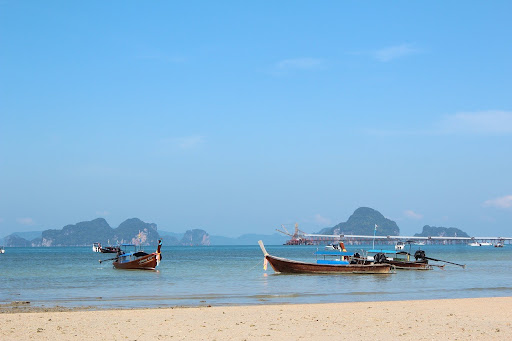 Tides are greatly affected by the Moon’s position along its orbit. On top of that, there is also the gravitational pull of the Sun. However, between the two, the Moon’s influence is greater because it is much closer to us.

The biggest difference in tides occurs during New Moon and Full Moon. Since they are in a straight line, the gravitational pull of the Sun and Moon is combined. This causes what is called “spring tides” or “king tides.”

With spring tides, there is a big “leap” between low and high tides. That means, high tides are exceptionally high, and low tides are also very low.

The opposite happens during the First Quarter and Last Quarter. Since the Moon is at a right angle with the Sun, their pull on the tides cancels out, resulting in “neap tides.” The difference between high tide and low tide during these phases is not very pronounced.

On Religions and Cultures 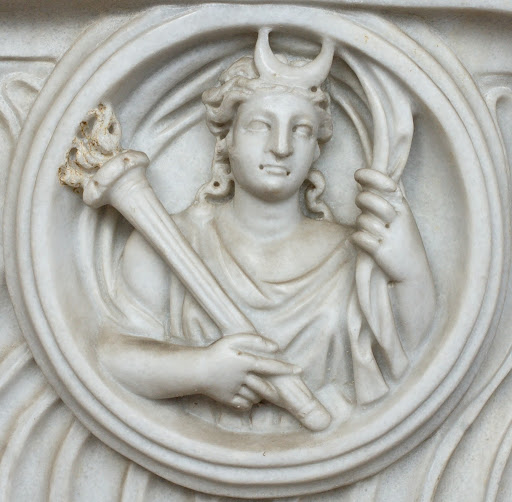 In mythology, many gods and goddesses have been associated with the Moon. In Greek mythology, Selene personified the Moon. People worshipped her on Full Moons. Her Roman counterpart is Luna.

There are also male deities associated with the Moon. For the Germanic tribes, it was called Máni. Other male lunar deities are Sīn (Mesopotamia), Tsukuyomi (Japanese), and Igaluk (Inuit), among others.

Full Moon Names Through the Months

Full Moons have been part of people’s lives, especially during ancient times. As such, they gave names to the Full Moons of each month, depending on the seasons and events observed in nature.

Though different, some of the names that European people gave had some resemblance to how the Native American tribes also called them. This just goes to show the similarities in how, in some ways, people relate this phenomenon to their environment.

Why Are They Named So? 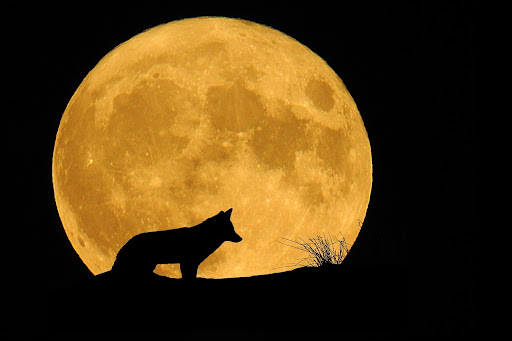 The wolves howling during the Full Moon of January earned it the nickname Wolf Moon. In February, when it is winter in the northern hemisphere, the Full Moon is nicknamed the Snow Moon. Interestingly, it is also called a Red Moon in the Southern Hemisphere.

In March, when spring comes and the ice begins to thaw, earthworms are seen once again from the ground. This is why a Full Moon this month is called a Worm Moon. These worms attract birds to come back during this season. April’s Pink Moon was named after the time of year when flowers start to bloom.

A Full Moon in May is called a Flower Moon because of the many plants and flowers that bloom during the spring season. In June, a Full Moon is called a Strawberry Moon since berries ripen during this period.

Male deers grow antlers in July so a Full Moon during this time is called a Buck Moon in some cultures. The Algonquin tribes get a good catch during August. With that, they called the Full Moon of this month the Sturgeon Moon.

The Harvest Moon usually falls in September but, sometimes, it can be in October. It is the Full Moon that is closest to the autumnal equinox. October’s Full Moon is called the Hunter’s Moon or even sometimes Blood Moon. This is because hunters slaughter animals to preserve meat for winter. It is the first Full Moon after the Harvest Moon.

Beavers also prepare for winter in November so a Full Moon this month is named after them. Lastly, in December, there is the Cold Moon as it signals the start of winter in the northern hemisphere.

Suitability for Astronomy and Stargazing 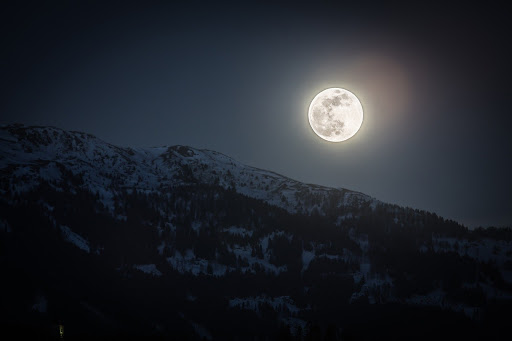 The Moon shines the brightest during the Full Moon. It is the best time to observe it since the lunar disk is fully visible. However, a luminous night is not the most ideal if you want to spot other astronomical objects.

A Full Moon’s glare will make stars, galaxies, planets, nebula, and other less bright objects invisible. If you want to observe fainter objects, the darkest nights will fall on a New Moon. Also, the period between the Last Quarter to the First Quarter is great for stargazing and observing night sky objects other than the Moon.

A Full Moon means a luminous night sky and greater tides. Knowing about it can give us an idea if we are planning to camp out with our telescopes and observe the sky.

Do you want to know about the next Full Moon? Below are the Full Moon dates to remember in 2021 and 2022. Together with the dates are exciting astronomical events we can look forward to.

Interesting Facts About the Full Moon

Why is there no lunar eclipse every month?

Generally, there is one Full Moon every month. However, we do not have lunar eclipses every Full Moon. The reason for that is the tilt of the Moon’s orbit. It is tilted by 5 degrees so sometimes it is above or below the shadow cast by Earth. When they are perfectly aligned, that is when an eclipse happens.

The same case happens why there is no solar eclipse every New Moon.

How many Full Moons are there in a year?

Typically, we have 12 Full Moons in a year. However, the Gregorian calendar, the one we are commonly using, is a solar calendar. It does not perfectly coincide with the Moon’s cycle. Because of that, there will be years when we have 13 Full Moons.

Blue Moons appear about once every two to three years.

How many lunar eclipses in a year?

Why is a total lunar eclipse red?

In a total lunar eclipse, the Moon can have an orange to reddish color. The Moon does not receive direct sunlight during an eclipse, however, a bit of sunlight passes through our atmosphere. This light is scattered and filtered by the Earth’s atmosphere, leaving only red and orange—the colors with the highest wavelength.