The Tarantula Nebula was first observed from an observatory located in Africa’s Cape of Good Hope. Interestingly, the Tarantula Nebula didn’t even get a brightness assignment at first since telescopes at that time were not sufficiently powerful to detect any individual stars within the structure.

For this same reason, the Tarantula Nebula actually didn’t get its common name until more powerful photos were generated during the 20th century. These photos allowed astronomers to peer more deeply into the central structures than ever before and see the extremely hot hydrogen filaments that give this nebula its giant spider-like appearance.

The Tarantula Nebula is estimated to be more than 100 times the size of the nearest such structure to Earth, the Orion Nebula. Astronomers estimate that if it was in the position the Orion Nebula now occupies, it would produce active shadow regions on Earth and take up enough cosmic space to fit 60 full Moons stacked end to end – so about half the visible sky!

The Tarantula Nebula also encompasses one of the nearest documented supernova explosions, catalogued as Supernova 1987A. This supernova became famous because it could be easily viewed with the naked eye when the star exploded in 1987. 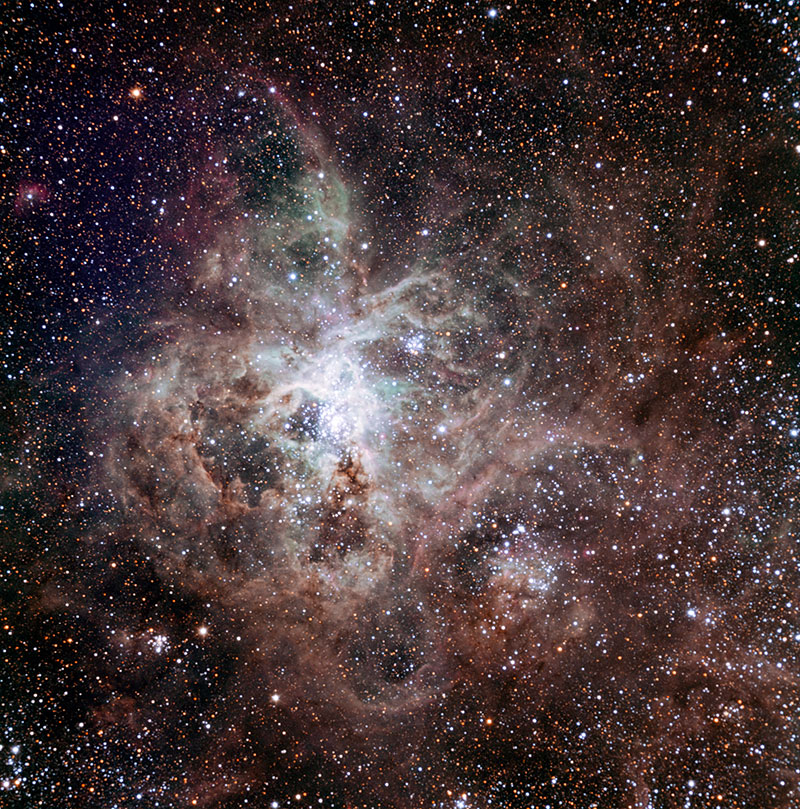 Here is a profile of the Tarantula Nebula at a glance.

Facts About the Tarantula Nebula

– The nebula was first discovered, described and catalogued by Abbe Nicolas-Louis de Lacaille in the period of time between 1751 and 1753. Abbe is the one who gave the structure the designation of “Nebulae of the First Class.”

– The Tarantula Nebula is where the most massive catalogued stars known to humankind reside. As such, it is a frequent target for astronomy students striving to learn more about star formation in all its various life stages and aspects.

– Just one well-known star cluster inside the Tarantula Nebula has more than 800,000 catalogued stars and protostars (stars in formation). For this reason, the entire structure was once thought to be a single bright giant star until high resolution imaging became possible and further definition revealed its true nature.

– The stars and star clusters inside the Tarantula Nebula range in age from just two million years old (which is very young for a star) to more than 25 million years old. The nebula also contains the fastest known spinning star and the speediest moving stars currently known.

– From images taken by the Hubble Space Telescope, it is possible to view the intricate gaseous landscape that is continually changing as a result of ultraviolet light, stellar winds, rapid combustion processes and more.

– While the Tarantula Nebula only has a brightness magnitude of 8.0+, this is extraordinarily bright considering its extreme distance from Earth.

– Inside of NG 2070 lies R136, a starburst region that is largely responsible for making the rest of the Tarantula Nebula visible in the night sky. While very young at around two million years of age, R136 is enormously dense, measuring 450 million solar masses. It contains some of the brightest, hottest, densest stars every catalogued. It also has some of the largest stars ever recorded – some young stars are 100 times the mass of the Sun.

– The second major star cluster inside the Tarantula Nebula, Hodge 301, is nearly opposite to NG 2070’s R136. It is much older, with an estimated age between 20 and 25 million years old. Astronomers estimate that more than 40 of its stars have already reached red giant status and exploded as supernovae. Some of these stars are still ejecting matter outwards at a calculated rate of 200 million miles per second.

– The diversity within the Tarantula Nebula is part of what makes it a near-perfect choice for astronomers studying star formation across the full landscape of a star’s many life stages. In fact, many astronomers believe this nebula accurately represents what the atmosphere must have been like after the Big Bang when the universe itself was forming.

– Inside the Tarantula Nebula is another famous structure catalogued as NGC 2074 and nicknamed the “Seahorse of the Large Magellanic Cloud.” NG 2074 is located within NG 2100, an area characterized by an inner cluster of blue light stars surrounded by an outer ring of red light stars.

– The cosmic activity that is still being observed today within the Tarantula Nebula first began millions upon millions of years ago. Eventually, many of the star clusters within the nebula’s borders are expected to form globular clusters, groups of aging stars orbiting in the outer perimeter of the nebula.

– In contrast, new protostars and young stars are thought to be taking some of the fuel necessary for their growth from another neighboring structure, a dwarf galaxy known as the Small Magellanic Cloud.