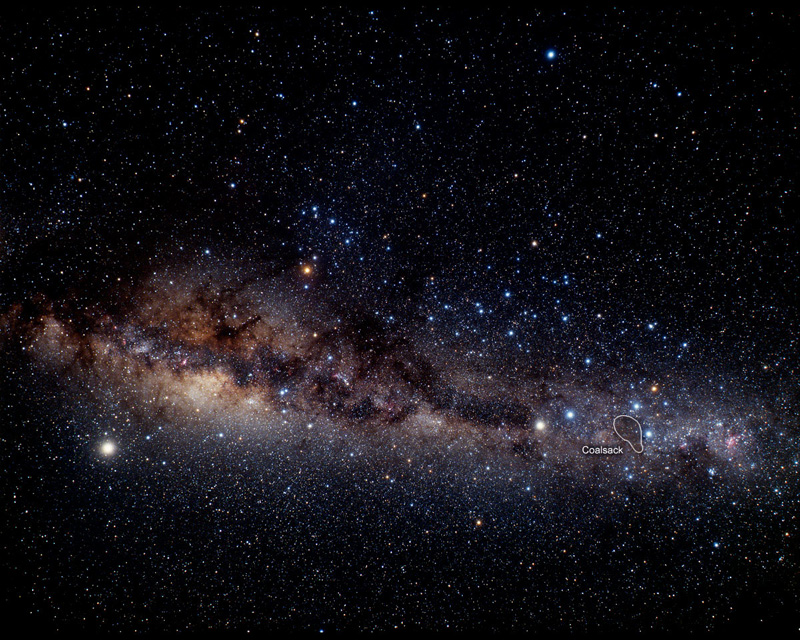 A dark nebula, also known as an absorption nebula, is a type of interstellar cloud that is so dense that it obscures the visible wavelengths of light from objects behind it. Light such as from background stars and emission or reflection nebulae.

The clouds contain a very high concentration of interstellar dust, which allows them to scatter and absorb all incident optical light. This makes them completely opaque at visible wavelengths. This dust is usually located in the coldest, densest parts of molecular clouds.

They appear dark because these sub-micrometre-sized dust particles are coated with frozen carbon monoxide and nitrogen. This blocks the passage of light at visible wavelengths. Also present are molecular hydrogen, atomic helium, C18O, CS, NH3 (ammonia), H2CO (formaldehyde), c-C3H2 (cyclopropenylidene) and a molecular ion N2H+ (diazenylium), all of which are relatively transparent.

The average temperature inside this type of nebula ranges from about 10 to 100 Kelvin. This allows hydrogen molecules to form and an abundance of star formation to take place. Dark nebula don’t have clearly defined outer boundaries and sometimes take on convoluted serpentine shapes, meaning they are all very irregular in shape.

The largest dark nebulae are visible to the naked eye and appear as dark patches against the Milky Way which is much brighter. One of the most famous example is the Coalsack Nebula.

What causes a dark nebula?

They are caused by interstellar clouds with a very high concentration of dust grains obscuring light. These dust clouds obscure and block visible light objects behind it. Such as background stars or emission or reflection nebulae. These nebulae are often the site of formation of new stars.

What is the difference between a dark and an emission nebula?

They can be visible to the naked eye and appear as dark clouds and shapes against the brighter stars or other nebulae behind them. The dark clouds don’t have any clear boundaries and usually take on unusual shapes.