Size of Pluto compared to the Earth

The moons of Pluto

Pluto has 5 known moons. In order of distance from Pluto, these are Charon, Styx, Nix, Kerberos and Hydra. Charon is the largest of the moons and mutually tidally locked with Pluto. This is a gravitational lock that makes one side of an astronomical body always face the another – for example how the same side of the Moon always faces Earth. Charon hovers over the same spot on Pluto – and the same side of Charon always faces Pluto.

Charon is also so large that Pluto-Charon are sometimes considered a double object, a double dwarf planet or a binary system.

The history of Pluto

Pluto is a dwarf planet that was discovered in 1930 by Clyde Tombaugh, who at the time was working at the Lowell Observatory in Flagstaff, Arizona. Tombaugh discovered Pluto accidentally while looking for an unknown planet called Planet X that was causing disturbances in the orbits of Uranus and Neptune. By comparing two photographs of the night sky taken one week apart, he noticed an unknown faint spot that had possibly moved. Photographs obtained later confirmed the moving object and after receiving suggestions for the new planet’s name from around the world, the name Pluto was announced on May 1, 1930. Later observations of Pluto however showed that it was not the Planet X that astronomers were looking for. In fact, it was later shown that Planet X did not really exist.

Pluto lies within a disc-shaped zone beyond Neptune’s orbit populated by tiny icy objects. This region is called the Kuiper Belt and its inhabitants are referred to as Kuiper Belt objects or trans-Neptunian objects. But in recognition of Pluto’s special place in astronomical history when it was downgraded to a dwarf planet, objects found in this region are also called “plutoids”. This icy region is believed to have formed in the early evolution of the Solar System. Not all plutoids are tiny. Eris, another dwarf planet, is actually more massive than Pluto. Because of its distance, it is difficult to determine what Pluto is made of. But it is believed to be composed of a rocky core, a mantle of water ice and a surface covered with methane ice and frosty nitrogen.

Although Pluto is the second largest dwarf planet in the Solar System (after Eris), its diameter of 2,302 km (1430.4 mi) is only two-thirds that of the Earth’s moon. It has a mass of 1.31 x 1022 kg, which is one-sixth that of the moon. Pluto is smaller than Jupiter’s four largest moons (Io, Ganymede, Europa and Callisto) and the largest moons of Saturn (Titan) and Neptune (Triton).

Pluto’s orbit around the Sun takes 246.02 Earth years. Unlike the eight planets in the Solar System, which have a more or less circular and flat orbit, the dwarf planet’s orbit is elliptical and highly inclined, similar to the dwarf planet Eris. Its perihelion brings it 4.44 x 109 km (2.76 x 106 mi) closer to the Sun, but this is 30 times farther than the Earth is to the Sun. Its aphelion takes it 7.37612 x 109 km (4.58 x 109 mi) away from the Sun, which is 48 times the Earth’s aphelion. When Pluto is close to the Sun, its icy surface melts, rises and forms a thin layer of gaseous atmosphere comprised of nitrogen, methane and carbon monoxide. As the dwarf planet moves farther away, this atmosphere freezes and falls back to the surface. Pluto completes one rotation in 6.39 Earth days. Its rotation is retrograde, meaning it rotates from east to west like the planets Uranus and Venus. Because it has an axial tilt of 122.5°, it actually rotates on its side. This creates extreme variations in its seasons.

In 1978, almost 50 years after Pluto’s discovery, the first moon orbiting the dwarf planet was discovered. Charon is nearly half of Pluto’s size and orbits 19,640 km (12,200 mi) away from it. Photographs taken of these two bodies show that Charon is gray, whereas Pluto is red. This indicates that their surfaces are composed of different materials. In 2005, the Hubble Space Telescope discovered two additional moons orbiting Pluto, which were named Nix and Hydra. These two moons’ orbits are farther away from the dwarf planet than Charon. In 2011 and 2012, two more moons were discovered by Hubble and they are temporarily named P4 and P5.

The United States National Aeronautics and Space Administration (NASA) launched the spacecraft mission New Horizons in 2005 to study Pluto and the other icy objects in the Kuiper Belt. It arrived on a Pluto flyby on July 14th, 2015 after a nine year trip. 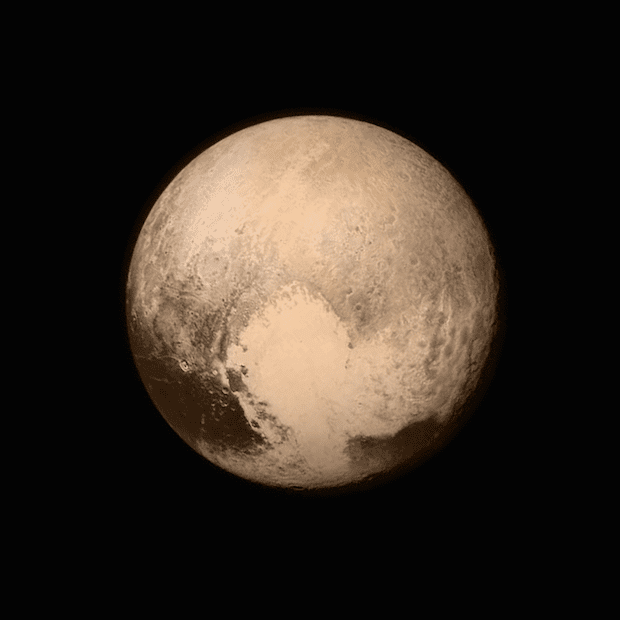