In fact, the Ring Nebula takes its common name from this ring-like appearance. Spreading outward from the tiny white circle in its center, the nebula gives the appearance of several rings of varying sizes stacked one right after the other.

That tiny white circle or dot in the center of the nebula is actually the remains of what used to be a star. The star is now known as a white dwarf, which is what a star in the last stages of its lifespan is termed.

While in reality the internal structure of the Ring Nebula is far more complex than its name suggests, its name sets this nebula apart from other nebulae with far different shapes and compositions. 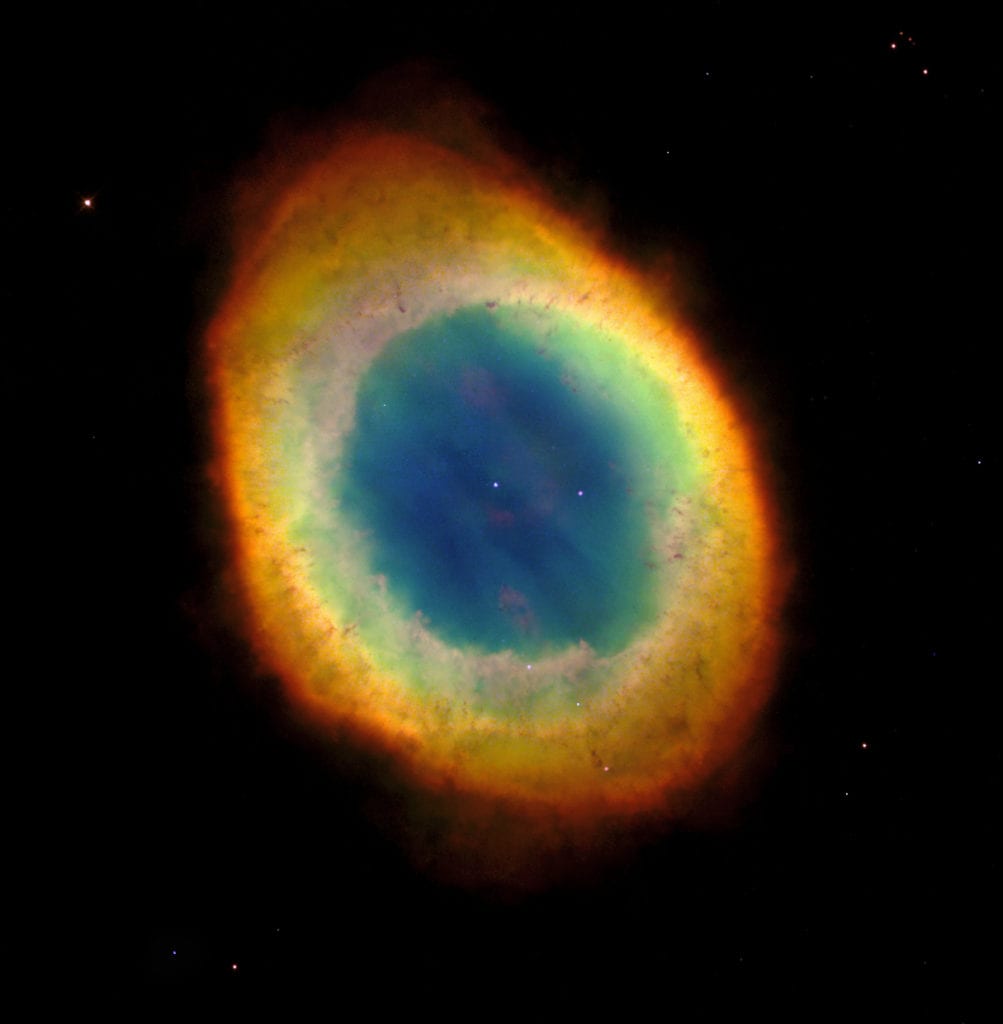 These are the basic characteristics of the Ring Nebula.

Facts About the Ring Nebula

– The nebula is estimated to be up to 100 times brighter than Sol, the Sun.

– The Ring Nebula was discovered independently by two French astronomers in 1779, Antoine Darquier de Pellepoix and Charles Messier. The formation now bears Messier’s name and is documented in the extensive Messier Catalog the astronomer compiled during his career. However, Messier’s own notes in his catalog indicate that Pellepoix was the first to actually discover the Ring Nebula.

– The Ring Nebula’s discovery was aided by observation of a nearby comet called the Comet of 1779.

– The Ring Nebula is distinguished by being just one of four planetary nebula in Charles Messier’s whole catalog of more than 100 entries. The reason such nebula are called “planetary nebula” is because early astronomy telescopes were not powerful enough to determine the difference between a planet shape and a nebula shape. The Ring Nebula was originally thought to be a planet rather than the remains of a star explosion for this reason.

– Astronomers estimate that the red giant star explosion that led to the formation of the Ring Nebula occurred between 6,000 and 8,000 years ago.

– The Ring Nebula is less ring-like than its original observers realized, with complex internal shapes resembling footballs and doughnuts and knots with tails, leading some to describe it as a “bicycle wheel” nebula. The surrounding structure will continue to shift and change as the nebula itself continues to expand out into space. Currently, the rate of nebula expansion is 1 arc second per century or between 20 and 30 km/second.

– The Ring Nebula itself consists of an inmost white dwarf star surrounded by an inner ring of helium gas, then rings of oxygen and hydrogen and all surrounded by an external ring of nitrogen and sulfur gas. These rings of gas were once the outer perimeter of the star itself, which has now been reduced to a very small white circle in the center of the gaseous rings.

– The reason the Ring Nebula is sometimes described as a bicycle wheel with spokes is because of how the stellar winds are interacting with the rings of gas. As the stellar winds continue to blow through the gaseous rings, they are able to make an impact at various levels depending on the density of the gases. The lighter gases are more easier to blow away than the heavier gases.

– The rings and spokes are also sometimes described as “braids” or “knots,” some of which can appear comet-like with tails (spokes) and intersecting filaments that appear not unlike antique lace.

– The nebula has a brightness magnitude of 8.8. This means it is not sufficiently bright to observe with the naked eye from Earth, but can be easily viewed through a telescope of medium strength. Astronomers recommend viewing M57 during the summer months for the best view.

– The Ring Nebula is one of Charles Messier’s more famous discoveries and is a popular choice in many hobbyist astronomy viewing circles.

– The invention and launch of the Hubble Telescope into deep space made it possible to observe the Ring Nebula in more detail than ever before. Photographs taken by Hubble have been enhanced with color to outline where different types of gases intersect and interact in the rings around the central white dwarf star itself.