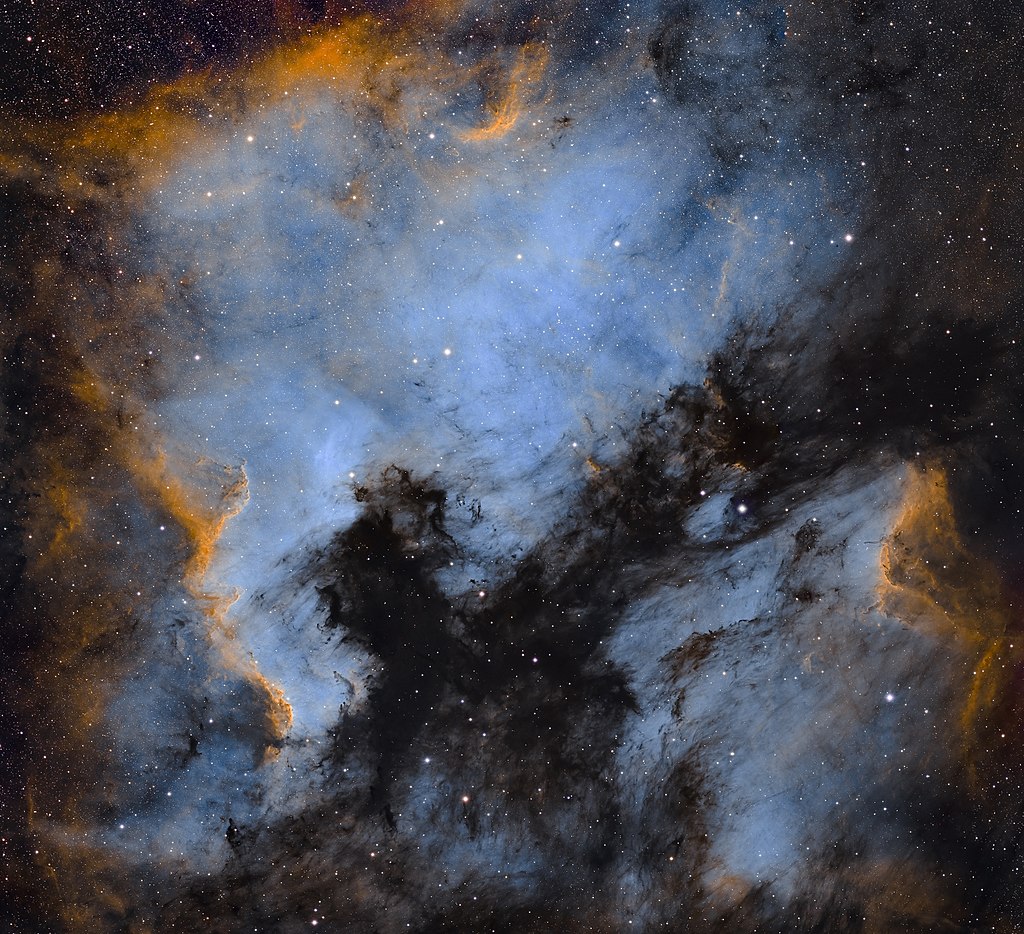 The North American Nebula is an emission nebula in the constellation Cygnus, close to Deneb (the tail of the swan and its brightest star). The nebula resembles that of the continent of North America, complete with a prominent Gulf of Mexico, which is why it was given its name.

The North American Nebula is located around 1,600 light years away from the Solar System and has an apparent size of 120 × 100 arcminutes. It covers a region more than ten times the area of the full moon, but its surface brightness is low, so normally it cannot be seen with the naked eye.

Its apparent magnitude is 4 and binoculars and telescopes will show it as a foggy patch of light under sufficiently dark skies. Using a UHC filter, which filters out some unwanted wavelengths of light, it can be seen without magnification under dark skies. Its shape and reddish color (from the hydrogen Hα emission line) show up only in photographs of the area.

The identity of the star that ionizes the nebula’s hydrogen was long uncertain and suspected by some to be the bright star Deneb, as it lies so close. However, it is the hot, massive 6th magnitude binary star HD 199579, also known as Miro’s Diamond, that is responsible for the nebula’s glow.

In 1959, American astronomer Stewart Sharpless realised that the North America Nebula is part of the same interstellar cloud of ionized hydrogen (H II region) as the Pelican Nebula, separated by a dark band of dust, and listed the two nebulae together in his second list of 313 bright nebulae as Sh2-117.

They are both located in the Orion Arm of the Milky Way. At optical wavelengths, the North America Nebula and the Pelican Nebula appear distinct as they are separated by the silhouette of the dark band of interstellar dust L935, which was catalogued by American astronomer Beverly T. Lynds. The whole HII region Sh2-117 is 140 light years across, and the North America Nebula stretches 90 light years north to south. Sh2-117 is also a strong radio emitter.

The portion of the North American Nebula that resembles Mexico and Central America is known as the Cygnus Wall, and this region exhibits the most concentrated star formation.

The open star clusters Collinder 428 and NGC 6997 appear embedded within the North American Nebula, but are not really related to it. NGC 6997 can be seen in the direction of the “Great Lakes” area, but in fact lies hundreds of light years beyond the nebula. Collinder 428 is visible at the eastern edge of the nebula and may not be a cluster at all, but just a window visible in the dark cloud.

The North American Nebula has the designations of NGC 7000, Sharpless 117 and Caldwell 20.