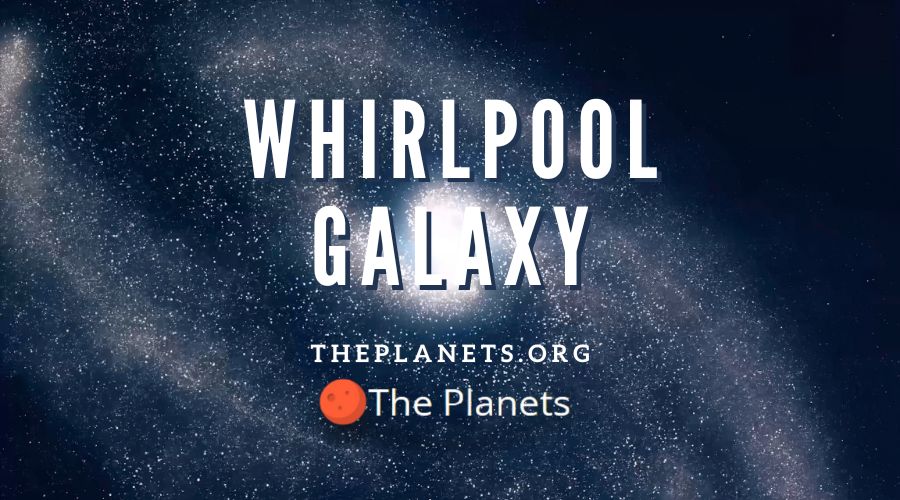 • Charles Messier was the first to discover the Whirlpool Galaxy, and he made his discovery in 1773 when charting the night skies on a quest for objects that others might assume were comets.

• Willian Parsons, an Irish astronomer working at Birr Castle, was the first to discover the spiral nature of the galaxy, as well as the remnants of the dwarf galaxy neighbor.

• The two galaxies are slowly merging together, and the process is well underway. The original shape of the dwarf galaxy is no longer obvious, and both spiral arms of the Whirlpool Galaxy have been misshapen by the event.
The merger has sparked a burst of star production in the center of the galaxy since the dwarf galaxy is supplying a vast amount of raw material.

• At the heart of the Whirlpool Galaxy is a supermassive black hole, similar to the one found at the center of the Milky Way. The Whirlpool’s black hole is encircled by rings of dust that are constantly forming new stars. The activity is high enough for astronomers to classify the Whirlpool as a Seyfert galaxy.

• The dwarf galaxy companion to the Whirlpool Galaxy was given the designation M51b since it will eventually be fully absorbed into M51, or Messier 51, named for its discoverer. M51a and M51b are not yet fully merged, and they are connected by a bridge of dust and gas.

An In-Depth Look at the Whirlpool Galaxy

The Whirlpool Galaxy was, in a sense, bound to become one of the most famous galaxies known to man. The galaxy is part of the Canes Venatici (The Hunting Dogs) constellation, and when viewed with a proper telescope, the side of the spiral that faces Earth is clearly visible. It’s one of the brighter objects in the sky, and it can easily be found with the simplest telescopes and binoculars. Not only that, but it is visible with the naked eye as well.

Not only was the Whirlpool Galaxy the first of its kind to be identified, but it remains one of the most popular topics of study amongst astronomers. This is due to the interactions between the Whirlpool Galaxy, designated M51 or M51a, and its dwarf neighbor, M51b. The pair of galaxies are most visible during the months of March through May, and those in the Northern Hemisphere should have a significantly easier time locating the pair.

While the Whirlpool Galaxy was first discovered in 1773, it wasn’t until nearly a decade later in 1781 when the dwarf companion galaxy was described by Pierre Méchain. To locate M51 in the sky with the naked eye, simply find the Canes Venatici constellation by looking just a few degrees from the handle of the Big Dipper. M51 is situated at the northeast border of its constellation.

When viewed with the naked eye or through either a scoped finder or a pair of binoculars, the Whirlpool Galaxy appears as nothing more than a small dot of light, and it can easily be confused with a local star. A 200mm telescope will reveal the defining characteristics of the object, which include a large, faint halo surrounding a highly-defined core region. Larger instruments can certainly produce more detail, but most standard consumer-grade telescopes won’t fit the bill. If amateur astronomers want to see the individual spiral arms of the galaxy, they must use at least a 300mm telescope.

The Whirlpool Galaxy is a common subject for astrophotography since it can be blown into full detail with professional-grade telescopes, and time-lapse exposures allow astronomers to get brighter, more detailed images. Some of the most famous images of the Whirlpool Galaxy were taken by the Hubble Space Telescope in January of 2005, which not only shows details of the shapes of the spiral arms, but also reveals cosmic structures hiding within the arms.

Scientists agree that M51 is relatively quite close to Earth, but there is some debate over the distance. The most common figure places the distance at 23 million light-years, but estimates have been made ranging from 15 to 35 million light-years. The estimate of 23 million light-years was derived from data collected regarding a supernovae that exploded in the Whirlpool Galaxy. Such events create tiny fluctuations in the way scientific instruments detect cosmic objects, which gives researchers the opportunity to use more sophisticated measuring techniques.

Even though the Whirlpool Galaxy was discovered in 1773, it wasn’t until 1845 that it was awarded the designation of a true spiral galaxy. William Parsons, the 3rd Earl of Rosse, used his amazing wealth to procure the largest optical telescope the world had ever seen, and he used the device to view M51 with the goal of discerning its true spiral nature.