Size of Venus compared to the Earth

More information and Facts about Venus

By the time of the ancient Romans it was understood that Venus was one of four planets other than the Earth. Being the brightest and most visible of these planets, the Romans named Venus after their goddess of love and beauty. As a result of its name, the planet has naturally been associated with love, femininity, and romance throughout history.

It is often remarked that Venus and Earth are twin planets due to their similarity in size, density, mass, and volume. Though these planetary characteristics are relatively the same, Venus and Earth are still substantially different in many other ways (atmosphere, rotation, surface temperatures, and Venus’ lacking a moon). If the twin relationship remains, it should be noted that they are not identical.

As with Mercury, our knowledge of Venus has grown considerably during the latter half of the twentieth-century. For example, prior to the several planetary missions conducted by NASA and the Soviet Union beginning in the 1960s, scientists had been hopeful that conditions beneath the extremely dense clouds covering the planet would allow for life. Unfortunately, the data collected during these missions proved that the conditions present were too severe to support life.

Venus’ atmosphere can be divided into two broad layers. The first is the cloud bank that effectively encases the entire planet. The second is everything below these clouds.

The clouds surrounding Venus extend from 50 to 80 kilometers above the planet’s surface and are composed primarily of sulphur dioxide (SO2) and sulphuric acid (H2SO4). These clouds are so dense that they reflect 60% of the sunlight Venus receives back into space.

The atmosphere of Venus gives it a light yellowish appearance.

When studying the sub-cloud atmosphere two features are immediately prominent: density and composition. Furthermore, the effect these two features produce on the planet is profound, making Venus the hottest and least hospitable of any planet in the Solar System.

Firstly, with an atmospheric density of approximately 65 kg/m3, the resulting atmospehric pressure is ninety-two times that found at sea level on Earth. The magnitude of this difference is substantial. To put it in perspective, one would have to travel to a depth of roughly one kilometer beneath the ocean surface to find the same pressure on Earth.

Secondly, the sub-cloud atmosphere’s composition is roughly 97% carbon dioxide (CO2) with the remaining 3% being primarily Nitrogen (N2). Thus, there is an extremely thick zone of carbon monoxide between the high altitude cloud layer and the planet’s surface. The outcome of this environment is a very intense manifestation of what is known as the greenhouse effect; that is, heating caused by the atmospheric trapping of solar radiation.

In the case of Venus, the greenhouse effect begins when small amounts of solar radiation in the form of visible light penetrate the dense cloud layer. Once this radiation is absorbed by the surface, it is converted into heat and emitted back into the atmosphere. At this point, however, the heat is unable to pass back through the carbon dioxide zone as easily as the light. (This is due to the intrinsic properties of the carbon dioxide.) Instead, the heat is absorbed by the carbon dioxide, then radiated in part back toward the planet’s surface. The cumulative effect is a constant abundance of heat, which, in turn, causes the surface temperature to remain at a permanent and severe 480° C. This easily makes Venus’ surface the hottest of any planet’s in the solar system.

Due to the thick clouds enshrouding Venus, the details of its surface cannot be obtained through simple photographic means. Fortunately, scientists have been able to use the method of radar mapping to acquire this information instead. While both photography and radar imaging work by collecting radiation that has bounced off an object, the difference lies in the forms of radiation collected. Photography collects visible light radiation, and radar mapping collects microwave radiation. The advantage in using radar mapping with Venus is that microwave radiation is able to pass through the planet’s thick clouds, whereas the light necessary for photography is unable to do so.

The first radar mappings of the Venusian surface via spacecraft came in 1978 when the Pioneer Venus spacecraft began orbiting the planet. What the resulting maps revealed was a surface consisting primarily of plains formed by ancient lava flows, with only two highland regions, Ishtar Terra and Aphrodite Terra.

In 1990, the Magellan spacecraft began orbiting Venus. In addition to performing radar mapping similar to that of Pioneer Venus, Magellan also undertook a more advanced radar imaging that gathered much finer details. What Magellan found was approximately 1000 impact craters. Interestingly, none of the craters seen were less than 2 km in diameter. This suggest that any meteroid small enough to create a crater having a diameter less than 2 km would have broken apart and burned up during its passage through the dense Venusian atmosphere.

An additional observation regarding the size of the impact craters helped to shed light on the age of the planet’s surface. Not only were small impact craters absent on the planet’s surface, but also those of large diameter. What this tells us is that the surface has been formed since the period of heavy bombardment, a span of 3.8 to 4.5 billion years ago when a large number of impact craters were formed on the inner planets. Thus, geologically speaking, the Veunsian surface is relatively young.

Finally, the surface’s most prominent features are those produced by the planet’s volcanic activity. As noted above, the first of these features is the enormous plains caused by ancient lava flows. Covering over 80% of the Venusian surface, these plains are the most dominant feature. The second prominent feature is the surface’s volcanic structures, which are numerous and varied. In addition to shield volcanoes similar to those found on Earth (e.g., Mauna Loa), many “pancake” volcanoes have been observed on Venus. These volcanoes, unlike any on Earth, are believed to have formed their distinctive flat, disc-like shape due to an eruption of all of the volcano’s lava at once through a single vent. After such an eruption, the lava then spreads outwardly in a uniform, circular manner.

As with the other terrestrial planets, Venus’ interior is essentially composed of three layers: a crust, a mantle, and a core. However, what is intriguing about Venus’ interior (as opposed to that of Mercury or Mars) is how alike it is to the Earth’s interior. While it is impossible to test the true similarity of the two planets’ interiors, it is reasonable to draw such conclusions based on the characteristics the two planets are known to share. Hence, it is believed that Venus’ crust is 50 km thick, its mantle 3,000 km thick, and the core has a diameter of 6,000 km.

An unanswered question about the Venusian interior is whether or not the planet’s core is liquid or solid. On one hand, because Venus and Earth are so alike, it is reasonable to conclude that since Earth has a liquid core, Venus does as well.

The most notable aspect of Venus’ orbit is its uniformity of distance from the Sun. Indeed, with an eccentricity of only .00678, Venus’ orbit is easily the most circular of all the planets. Moreover, this small eccentricity means that the difference between Venus’ perihelion (1.07 x 108 km) and its aphelion (1.09 x 108 km) is a mere 1.46 x 106 km.

Like information regarding Venus’ surface, little data about its rotation could be obtained until the radar imaging missions of the second half of the twentieth-century. Surprisingly, what these missions revealed was just how unique Venus’ rotation is.

Whereas the standard rotation for a planet about its axis is counterclockwise (as viewed from the “top” of the orbital plane), Venus’ rotation is retrograde or clockwise. The reason for this is presently unknown, but there are two popular theories. The first points to the 3:2 spin-orbit resonance of Venus with the Earth.

To some, this is highly suggestive that over billions of years the Earth’s gravitational force has altered Venus’ rotation to its present state. Some scientists, however, doubt that the Earth’s gravitational force has been great enough to change Venus in such a fundamental way. Instead, they have looked to the early Solar System when the planets were being formed to provide an explanation. They theorize that Venus’ original rotation was similar to that of the other planets’, yet it was altered to its current orientation when a large planetesimal struck the young planet with great force, essentially knocking the planet upside down.

A second unexpected discovery regarding Venus’ rotation is its speed. Taking approximately 243 Earth days to complete a single rotation, a day on Venus is longer than on any other planet. This alone is noteworthy. What is even more striking, though, is when Venus’ day is compared to its year. At roughly 224 earth days, Venus’ year is almost 19 earth days less than one Venusian day. Again, no other planet shares such a property. The leading theory for this phenomenon is that which is used to explain the planet’s retrograde rotation.

What is the Diameter of Venus?

How long is a Day on Venus?

It takes approximately 243 Earth days to complete a single rotation, a day on Venus is longer than on any other planet.

How Long is a Year on Venus?

Which Planets Can Never Be Seen In Opposition? 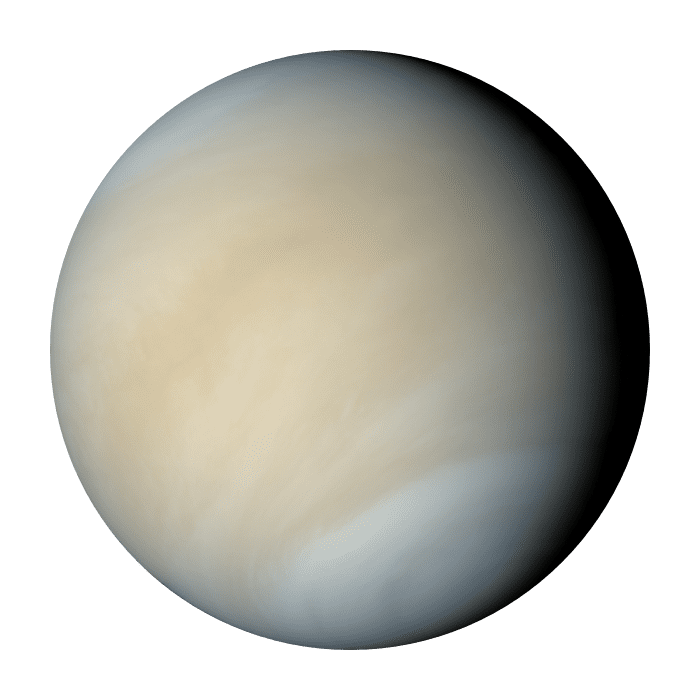