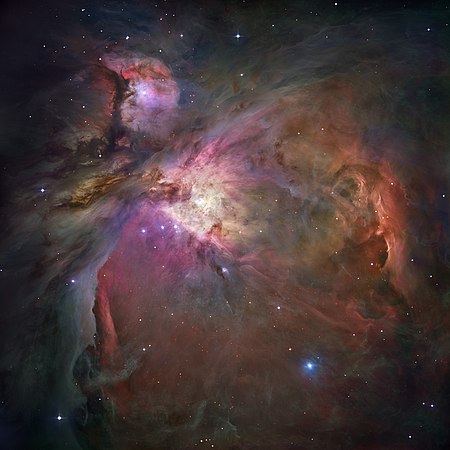 Nestled within this nebula is what scientists refer to as the Trapezium. The Trapezium consists of four major stars that are positioned in the shape of a trapezoid. There are many interesting facts about the Orion Nebula.

Our planet Earth rests within an amazing galaxy full of stars, moons, constellations and other planets. With just the naked eye, locating the constellation of Orion is easy and leads to another wonder in the sky, the Orion Nebula.

What is a Nebula?

First, what is a nebula? A nebula is basically a cloud of dust. Specifically, a very large cloud of dust consisting of plasma, hydrogen, helium and gases. The word Nebula is found in the Latin language and simply defined as cloud. Inside this enormous cloud is where newborn stars are formed. The galaxy we live in houses several nebulae and they are found in other galaxies too.

The Orion Molecular Cloud Complex lies approximately 1,500 light-years from our Earth and contains the famous molecular cloud known as the Orion Nebula. Primarily consisting of hydrogen, this molecular cloud is a 24 light-year-wide area full of baby stars. Surrounding this newborn star nursery are four larger stars which form the Trapezium.

Scientists named this formation the Trapezium due to its four large stars creating the shape of a trapezoid. Inside this trapezoid, the newly formed stars struggle with their growth because of these four stars. A cavity within the nebula has been created by ultraviolet light released from these larger stars. It is this light that hinders the growth of the newborn stars. Emerging together, these four stars contain very hot young stars known as O-type and radiate to create the splendid glow.

Later in 1618, the Orion Nebula was identified by Johann Cysat who was a Swiss astronomer. Possibly the Orion Nebula is the most well-known since it was the very first of its kind to be photographed in 1880. It was an American, Henry Draper, who captured this image in the United States.

Such an image sparks the interest for many astronomers as they admire the sparkling cluster of four stars of this popular trapezoid. This glowing show can be seen unaided, or without the use of a telescope. The prime time for star gazers to see this popular nebulae is during the winter in the month of January. Those fortunate enough to have a telescope may be able to zoom in and witness the birth of some newborn stars.

Over the years, the Orion Nebula has caught the attention of cultures all around the world. In the Mesoamerican region, the Mayas viewed this nebulae as the “fire of creation” as it gave such a blazing glow to its spectators. Today, NASA still utilizes the Hubble telescope to capture amazing images of this bright, hot bed of stars in the sky.