Size of Mars compared to the Earth

Let’s take a look at some of the most significant Mars facts!

It was believed life existed on Mars for much of the nineteenth century. The reason behind this belief was part mistake and part imagination. In 1877, the astronomer Giovanni Schiaparelli observed what he believed to be straight lines on Mars’ surface. As others noticed these lines, some suggested that they were too straight and could only be the work of intelligent life. The popular conclusion as to the nature of these lines was that they were canals constructed for irrigation purposes. However, with the development of more powerful telescopes in the early twentieth century, astronomers were able to view the Martian surface more clearly and determine that these straight lines were merely an optical illusion. As a result, the earlier claims of life on Mars were without evidence and, therefore, discarded.

The large amount of science fiction written during the twentieth century was a direct outgrowth of the belief that Mars possessed life. From little green men to death rays, Martians were the focus of many television and radio programs, comic books, movies, and novels.

Although the discovery of Martian life in the eighteenth century eventually proved to be false, Mars is nonetheless the planet most hospitable for life other than the Earth. As such, recent planetary missions have tried to determine if even the most basic of life exists on the planet’s surface. The Viking mission in the 1970s conducted experiments on the Martian soil in hopes of detecting microorganisms. While it was initially believed that the formation of compounds during the experiments were a result of biological agents, it has since been determined that these compounds can be created without biological mechanisms.

Even though the results lean toward the absence of life on Mars, scientists have speculated that conditions are right for life to exist beneath the planet’s surface. Future planetary missions scheduled to test the possibility of past and present life include the Mars Science Laboratory and ExoMars missions.

The composition of Mars’ atmosphere is extremely similar to Venus’, one of the least hospitable atmospheres in all of the Solar System. The main component in both atmospheres is carbon dioxide (95% for Mars, 97% for Venus). Yet a runaway greenhouse effect has taken hold of Venus. Producing temperatures in excess of 480° C, while temperatures on Mars never exceed 20° C. Thus, something other than the composition is at work. The huge difference lies in the density of the two atmospheres. Whereas Venus’ atmosphere is exceedingly thick, Mars’ is quite thin. Simply put, Mars would resemble Venus if it possessed a thicker atmosphere.

Additionally, with such a thin atmosphere, the resulting atmospheric pressure is only about 1% of that found at sea level on Earth. That is the equivalent pressure found at 35 km above the Earth’s surface.

One of the long standing research areas regarding the Martian atmosphere is its impact on the presence of liquid water. What the research has shown is that even though the polar caps possess frozen water and the air contains water vapor— a result of the freezing temperatures and low pressure caused by the weak atmosphere— is not currently possible for liquid water to exist on the planet’s surface. However, evidence provided by planetary missions suggests liquid water does exist one meter below the planet’s surface.

Surprisingly, despite the thin atmosphere, Mars experiences weather patterns. The primary form of this weather consists of winds, with other manifestations that include dust storms, frost, and fog. As a result of this weather, some erosion has been seen to take place at particular locations on the planet’s surface.

As a final note on the Martian atmosphere, leading theories claim that it may have once been dense enough to support large oceans of water. However, through some means in the planet’s past the atmosphere was drastically altered. One popular explanation for this change is that Mars was struck by a large body and in the process a large portion of its atmosphere was ejected into space.

The surface of Mars can be separated into two broad features, which, coincidentally, are divided by the planet’s hemisphere. The northern hemisphere is seen to be relatively smooth with few craters. Whereas the southern hemisphere is an area of highlands that are more heavily cratered than the northern plains. Other than topographical differences, the distinguishing feature of the two regions appears to be geological activity. With the northen plains being much more active.

Perhaps the most significant discovery regarding the Martian surface was the presence of channels. What is so meaningful about these channels is that they appear to have been created by running water. Thus providing evidence to support the theory that Mars could have been much more similar to the Earth at one time.

A surface feature that has remained in popular culture since its image surfaced is the “Face on Mars.” When this photograph was captured by the Viking I spacecraft in 1976, many took it to be proof that alien life existed on Mars. However, subsequent images showed that lighting (and a little imagination) are what brought life to the formation.

Similar to the other terrestrial planets, Mars’ interior is divided into three layers: a crust, mantle, and core.

Mercury’s core is believed to be approximately 3,000 km in diameter and composed primarily of iron. There is a significant amount of research being conducted to determine whether or not Mars’ core is solid. Some scientists point to the lack of a significant magnetic field as an indication that the core is solid. However, within the past decade much data has been gathered to indicate that the core is at least partially liquid. With the discovery of magnetized rocks on the planet’s surface, it appears, at the very least, that Mars did possess a liquid core at some point in its history.

The orbit of Mars is noteworthy for three reasons. First, its eccentricity is second largest among all the planets, smaller only than Mercury’s. As a result of this more elliptical orbit, Mars’ perihelion of 2.07 x 108 km is much larger than its aphelion of 2.49 x 108 km. Second, evidence suggests that this high degree of eccentricity has not always been present, and it may have been less than the Earth’s at some point in Mars’ history. The cause for this change is attributed to the gravitational forces exerted upon Mars by neighboring planets. Third, of all the terrestrial planets, Mars is the only one having a year that lasts longer than the Earth’s. This, of course, is due to its orbital distance. One Martian year is equal to almost 686 Earth days.

It takes Mars about 24 hours 40 minutes to complete one full rotation, easily making the Martian day the closest in length to an Earth day.

At roughly 25°, Mars’ axial tilt is yet another similarity the planet shares with Earth. What this means is Mars actually experiences seasons like those on Earth, though each is substantially longer because of the orbital distance of Mars. Unlike the Earth, however, Mars’ two hemispheres experience quite different temepratures for each season. This is due to the much larger eccentricity of the planet’s orbit.

What Is The Gravity On Mars?

Technically, the gravity on Mars = 3.721 m/s². Related to Earth, the gravity of Mars is about 38% the gravity of Earth, where our gravity is know as 1 ‘g’. It’s a reasonable gravity for colonising the planet, but if those colonists wanted to come back to Earth after a few years, our heavier gravity may cause a problem for them over the long term.

Is Mars Bigger Than Earth?

No, Mars is smaller than Earth. While Earth has a radius of 6,371 km, Mars equatorial radius is only 3,389.5 km. This makes Mars the second smallest planet in the Solar System, larger than Mercury alone.

Why Is Mars Called The Red Planet?

Mars is called the Red planet because that is the color that we see in observations from orbit and from our telescopes. This red color is the result of oxidization of iron minerals in the soil, frequently blown about in the poor atmosphere. This gives the surface and the atmosphere the distinctively musky red color.

As Mars is one of the five planets we can see in the night sky with the naked eye, there is no one person that has been credited with its discovery. It has been known to be observed since the ages of antiquity. The first person to observe the planet through a telescope however, was Galileio Galilei. He was the first person to use such a telescope for astronomical observations.

How Long Is A Day On Mars?

Mars has a very rotation to Earth, with a day measuring roughly 24 hrs 37 minutes. A year on Mars is considerably longer however, at 687 days for an orbit of the Sun. 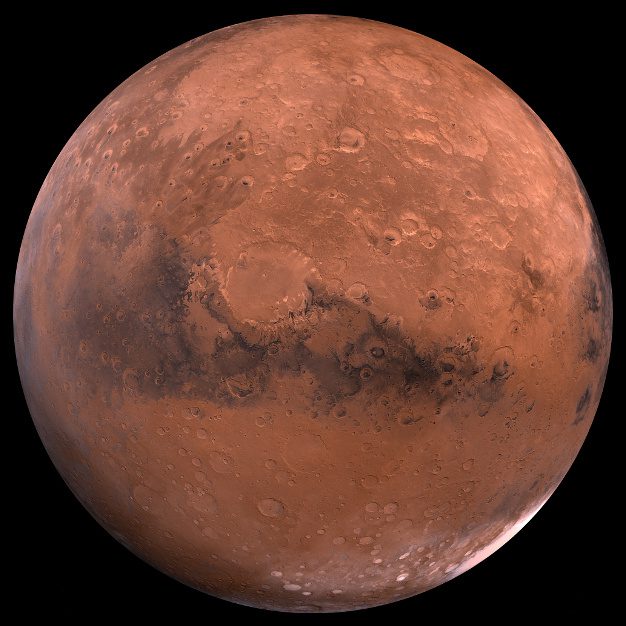