Every seven years or so, Mercury can be seen from Earth passing across the face of the Sun. This happens because Mercury’s orbit is inclined by 7 degrees to the plane of Earth’s orbit and its known as a transit. The next transit of Mercury is on November 12/13th, 2032 and will be visible from Europe after noon.

It is named for the Roman god Mercury, the messenger to the gods – most likely related to the orbiting speed of the planet. What else stands out with this small terrestrial planet? What makes it interesting? Let’s get stuck in to some juicy Mercury facts!

Size of Mercury compared to the Earth

What remains intriguing about Mercury is how scant our knowledge has been regarding some of its key details until recently. For example, it was only in 1974 that the Mariner 10 spacecraft captured the first images providing any specific detail of the Mercurial surface. Within the last several years, unexpected discoveries regarding Mercury’s atmosphere and interior have challenged previously accepted theories.

Now is an exciting time of discovery and new understanding of Mercury. On March 18,2011, the MESSENGER spacecraft achieved orbit around Mercury in what will be a year-long mission. Hopefully, many of our questions will be answered, and, almost certainly, new ones will arise.

Mercury Facts On The Atmosphere

The Mercurial atmosphere is so thin that it is virtually non-existent. In fact, at approximately 1015 times less dense than the Earth’s atmosphere, Mercury’s is closer to a true vacuum than any man-made vacuum ever created.

The explanation behind the lack of substantial atmosphere is twofold. Firstly, with a gravity only about 38% that of the Earth’s, Mercury is simply unable to retain much of an atmosphere. Secondly, Mercury’s close proximity to the Sun causes it to be constantly bombarded by solar winds, which carries off most of what little atmosphere does accumulate.

However, as meagre as its atmosphere is, Mercury does have one. According to NASA, its chemical composition is thought to be as follows: 42% oxygen (O2), 29% sodium, 22% hydrogen (H2), 6% helium, .5% potassium, and possibly trace amounts of argon, carbon dioxide, water, nitrogen, xenon, krypton, neon, calcium (Ca, Ca+), and magnesium.

A notable result of such a sparse atmosphere is the extreme temperatures found on the planet’s surface. With a low temperature of approximately -180° C and high of approximately 430° C. Mercury has the largest range of surface temperatures found on any planet. The extreme highs present on the side facing the Sun are due to the insufficient atmosphere, for it is unable to absorb the solar radiation. As for the extreme colds on the side facing away from the Sun, without a substantial atmosphere to trap solar radiation, all heat is lost to space.

Mercury Facts On The Surface

Until 1974, the Mercurial surface remained, in large part, a mystery to scientists due to Mercury’s close proximity to the Sun. Being so close to the Sun restricts Mercury’s visibility to just before dawn or right after dusk. At these times, unfortunately, the angle at which we see Mercury from the ground takes our line of sight through a significant amount of the Earth’s atmosphere, greatly obstructing our view.

The first feature is the huge number of impact craters that have accrued over billions of years. Caloris Basin is the largest of these with a diameter of 1,550 km. The second feature is the plains found between craters. These are smooth areas of the surface, hypothesized to have been created from ancient lava flows. The third feature is the cliffs (also known as scarps), which run anywhere from tens to thousands of kilometers in length and from one hundred meters to two kilometers in height.

The importance of these two features lies in what they imply. By the presence of ancient lava fields, it is clear that there was volcanic activity at one time. However, given the number and age of the craters, scientists have concluded that Mercury has been geologically inactive for a significant period.

The third of the surface features tells us something of great interest as well. Essentially, the scarps found on the surface are huge cliffs caused by the buckling of the planet’s crust. What is significant about the buckling on Mercury is what it implies. To understand the significance, we must use a comparison. The buckling on Earth is due to the shifting of tectonic plates, whereas the buckling on Mercury is due to the shrinking of its core. The implication is that because Mercury’s core is shrinking so, too, is the planet as a whole. Recent estimates show that Mercury’s diameter has decreased in excess of 1.5 kilometers.

Mercury Facts On The Interior

The planet’s crust is estimated to be between 100 and 300 kilometers in thickness. Mercury’s surface is part of the crust, so the presence of the previously mentioned scarps indicates that the crust is solid and brittle.

With a thickness of approximately 600 kilometers, Mercury’s mantle is relatively thin. Supposedly, its mantle has not always been this thin. Mercury used to have a much thicker mantle, but the leading theory explains that during formation of the Solar System, a large planetesimal collided with the planet, launching most of the mantle into space.

Mercury’s core has been the focus of much research. With an estimated diameter of 3,600 kilometers, the core gives the planet some interesting properties. The most obvious of these properties is Mercury’s extreme density for its size. With a planetary diameter of 4,878 kilometers, Mercury is smaller than the Jovian moon Ganymede and the Saturnian moon Titan, whose diameters are 5,270 km and 5,152 km, respectively. However, with a mass of 3.3 x 1023 kg, Mercury’s density of 5,400 kg/m3 is almost that of the Earth’s 5,540 kg/m3.

One debate that has recently be resolved regarding Mercury’s core is whether or not it is solid or liquid. By measuring how radio waves bounced off of the planet, scientists were able to determine that the core is, in fact, liquid. More specifically, the data gathered help to measure the amount of wobble in Mercury’s rotation. With a solid core the rotation would be rigid, whereas with a liquid core there are small amounts of variation in the rotation due to the liquid inside “sloshing” around.

With Mercury being so much closer to the Sun than any other planet, it naturally takes the shortest time to complete one full orbit. As a result, a Mercurial year is only about 88 Earth days in length.

A significant feature of Mercury’s orbit is its high eccentricity as compared to other planets. Furthermore, of all the planetary orbits, Mercury’s is the least circular. What this effectively means is that the difference between Mercury’s perihelion—the closet orbital distance to the Sun—of 4.60 x 107 km and its aphelion—farthest orbital distance from the Sun—of 6.98 x 107 km is rather large when contrasted with that of the other planets.

This eccentricity, along with the lack of a substantial atmosphere, helps to explain why Mercury’s surface experiences a wider range of temperature extremes than any other planet in the Solar System. Simply put, Mercury’s surface is much hotter at perihelion than at aphelion due to the large difference between the two distances. Conversely, the temperatures of other planets remain relatively stable because their aphelion and perphelion are virtually the same.

Mercury’s orbit is also significant in that it provides a beautiful example of modern physics. Over time the orbit of Mercury shifts slightly around the Sun (See Figure 1). This process is known as precession.

Though Newtonian mechanics (i.e., classical physics) does a fairly good job of predicting the speed of this precession, it still cannot predict it precisely. This was a persistent problem for astronomers in the late nineteenth and early twentieth century. Many theories were introduced to explain the difference between the actual and theoretical rates. One theory even suggested the existence of a unknown planet closer to the Sun than Mercury. However, the truth was finally revealed when Einstein published his general theory of relativity. As a consequence of this theory, Mercury’s orbital precession was finally described exactly.

Though it was long believed that Mercury’s spin-orbit resonance (the number of rotations per orbit) was 1:1, it was discovered in the mid-twentieth century that it is, in fact, 3:2. This resonance produces what would be fascinating phenomena for a witness on the planet’s surface. For example, the Sun would appear to rise to the highest point in the sky, then reverse its course and set in the same direction from where it rose.

How Many Moons Does Mercury Have?

Mercury does not have any moons. Given its proximity to the Sun and its gravity, Mercury would not be able to hold onto a moon. Venus has no moons either, but the reasons for this are more of a mystery to scientists.

How Long Is A Day On Mercury?

A day on Mercury is roughly equivalent on Earth to 58 days and 15 hours. A Mercury year on the other hand, take approximately 88 Earth days! 3 days every 2 years, that’s mind blowing.

The surface of Mercury is very similar to that of Earth’s moon, with its heavily cratered surface. The very slight atmosphere on Mercury provides virtually no protection from impacts. So the scars from bombardment of comets and meteors are widespread.

How Hot Is Mercury?

The temperature on Mercury is volatile. At night, the temperature can drop as low as -180 C. Day time temperatures can reach as high as 427 C (800 F), and the average temp is 167 C. Interestingly enough, Mercury is not the hottest planet in the Solar System. That title belongs to Venus, with it’s thicker atmosphere and runaway greenhouse effect.

How Did Mercury Get Its Name?

The Planet Mercury is named after the swift Roman messenger god, in around the 4th Century before common era. 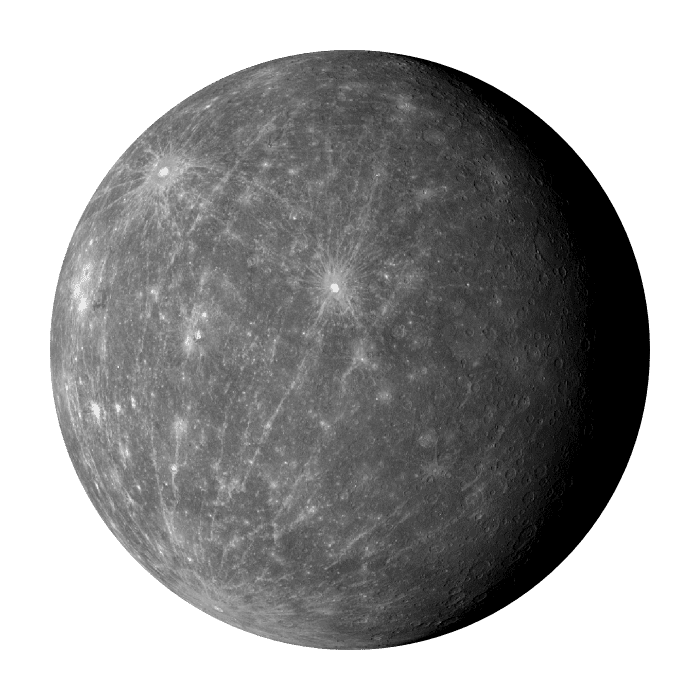