Facts About The Dwarf Planet Eris 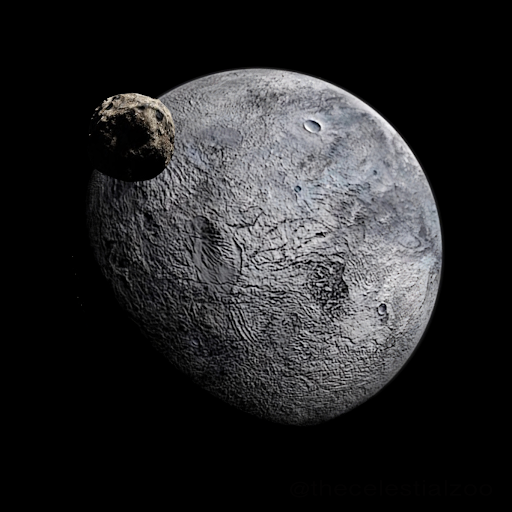 Eris is one of the five major dwarf planets in the solar system. The others are Pluto, Ceres, Makemake, and Haumea. Though Eris is only the second-largest dwarf planet, it is the most massive of the five. Additionally, it is the farthest from the Sun of them all.

Since Eris is located beyond Neptune, it is considered a trans-Neptunian object (TNO). The location of Eris is unique among other dwarf planets. It lies in the outer areas of the Kuiper belt called the “scattered disk.” The objects in this disk-like region are called scattered-disk objects or SDO. They have very unusual orbits that are nothing like those found in the inner solar system.

Eris is the 10th-largest object by size and the 9th-largest by mass that orbits the Sun. However, because of the distance, it remains the largest object that is not visited by a spacecraft yet. And so far, no ring system has been discovered around it.

This dwarf planet has one known moon called Dysnomia. This moon is around 700 km (435 mi) across. In fact, it is the second-largest moon of a dwarf planet, next to Pluto’s Charon. This moon is believed to be largely composed of ice.

Size of Eris compared to the Earth

Side by side comparison of the size of Eris vs Earth

Radius, Orbit, Surface, and Other Details 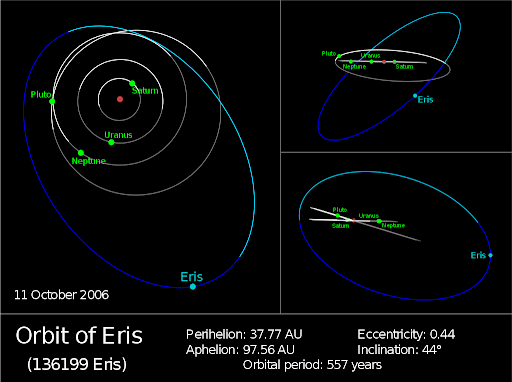 The orbit of Eris (blue) compared to those of Saturn, Uranus, Neptune, and Pluto (white/gray). The arcs below the ecliptic are plotted in darker colors, and the red dot is the Sun. The diagram on the left is a polar view whereas the diagrams on the right are different views from the ecliptic. Image credits: By User: Orionist

Eris follows a very eccentric orbit that is inclined by about 44° to the plane of the Solar System. It takes a very long time for this object to orbit the Sun, that is, 557 Earth years. That is a lot longer than a human lifetime!

With a rotation period of 25.9 hours, a day on Eris is about the same length as a day on Earth. It is impossible to see Eris with the naked eye. However, since its apparent magnitude is 18.7, it can be detected by high-quality amateur telescopes.

Eris is roughly 95 AU from us. At that distance, it takes roughly 13 hours for light to travel from the dwarf planet to reach us on Earth.

Eris has an albedo that is around 0.96. That means it absorbs only a small part of the light that reaches its surface and reflects 96% of it. Saturn’s moon, Enceladus, is the only more reflective body. This high reflectivity of Eris can be because of the ices on its surface. These ices renew as its eccentric orbit takes it farther from the Sun.

The Eridian surface indicates the presence of methane ice. It is comparable to that of Pluto and Triton, the largest moon of Neptune. What makes Eris different though is that its surface appears white, unlike Pluto and Triton Triton, which have reddish features. 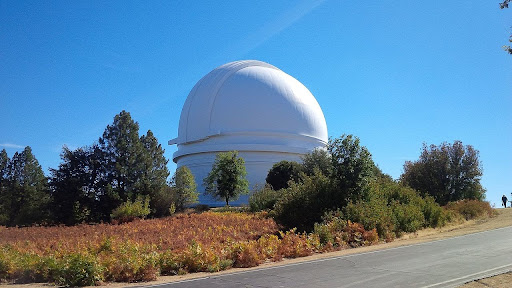 Eris was discovered on January 5, 2005, at Palomar Observatory. It was discovered by a team of three astronomers, Mike Brown, Chadwick Trujillo, and David Rabinowitz.

The discovery of Sedna in 2003 made the team reanalyze their earlier data. Images of Eris were already taken on October 21, 2003. However, precovery images revealed data as early as 1954. It was only in 2005 that the slow-orbiting dwarf planet was finally identified.

The same team, led by Brown, also discovered the dwarf planet Makemake. They announced the discovery of both objects on July 29, 2005. Eris was initially given the alternative designation 2003 UB313. Later that year, a moon was discovered around it. This natural satellite was temporarily designated S/2005 (2003 UB313) 1.

It was once thought that Eris was larger than Pluto and that it might be the missing 10th planet. That was the time when Pluto was not yet reclassified in 2006. After that, Eris did not make it as a planet because it does not have a clear orbit, just like Pluto.

Where Is Eris Located? 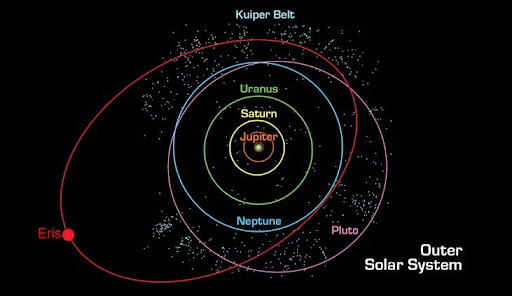 A diagram of the outer solar system. The Kuiper belt is shown as well as the orbits of the outer planets and dwarf planets. Eris’s eccentric orbit is in red. Image Credits: NASA

The average distance of Eris is 68 AU from the Sun. That means 68 times the distance of the Earth from the Sun. Due to its oval orbit, this distance varies. Its closest approach or perihelion is about 38 AU. The farthest point on Eris’s orbit or aphelion takes it as far as 97.56 AU.

Eris is located in the far reaches of the Solar System called the Kuiper Belt. Specifically, it lies beyond the main Kuiper belt, in a region called the “scattered disk.” It is 14,204,667,870 km from the Earth. And in terms of the Sun-Earth distance, it is equivalent to approximately 95 AU.

Eris in the Scattered Disk

The Kuiper belt is the cold and dark area beyond the orbit of Neptune. Icy and rocky objects of all sizes lie in this big disk. Methane, ammonia, and other frozen compounds are also believed to be in this region.

The objects in the inner Kuiper belt are mostly held into place by orbital resonances with Neptune. In this relationship, the objects are in a repeating pattern or ratio with Neptune. Let’s take Pluto as an example. Pluto is in a 3:2 resonance with Neptune. That means, whenever Neptune makes three orbits around the Sun, Pluto makes two.

The Kuiper belt was named after Gerard Kuiper, after publishing a paper about the region beyond Pluto. Sometimes, it is also called the Edgeworth-Kuiper Belt because astronomer Kenneth Edgeworth has also mentioned the objects there on a paper that he also published.

Neptune’s influence on the Kuiper belt objects (KBO) falters further into the outer belt. As the name says, objects on the scattered disk are “scattered” and are more unstable. These bodies have extreme orbits, with eccentricities around 0.8 and inclinations of more or less 40°.

The closest approach or perihelion of scattered disk objects (SDO) is about 30 AU or more. However, their eccentric orbits can take hundreds of AU farther. So far, Eris and its moon Dysnomia are the largest SDOs. 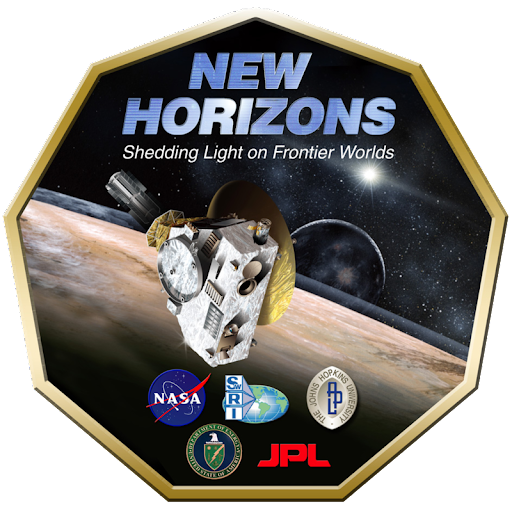 The Kuiper belt is very far from the Sun. In fact, there are only five man-made spacecraft that have made it as far as 50 AU from the Sun. These are Pioneer 10, Pioneer 11, Voyager 1, Voyager 2, and New Horizons.

New Horizons is the newest addition to the four spacecraft that have journeyed as far as the Kuiper belt. In 2015, it became the first spacecraft to do a flyby and explore the dwarf planet Pluto. After that, it visited 486958 Arrokoth, a Kuiper belt object that is shaped like a snowman.

Because of the success of New Horizon’s previous flybys, the dwarf planet Eris is among the spacecraft’s next targets. Calculations show that a mission to Eris would take about 25 years. There is still no final announcement yet about New Horizon’s next flyby. However, this does not mean that the spacecraft will not be busy. It will continue to gather data about the ice giants, Uranus and Neptune, as well as explore the environment in the Kuiper belt. 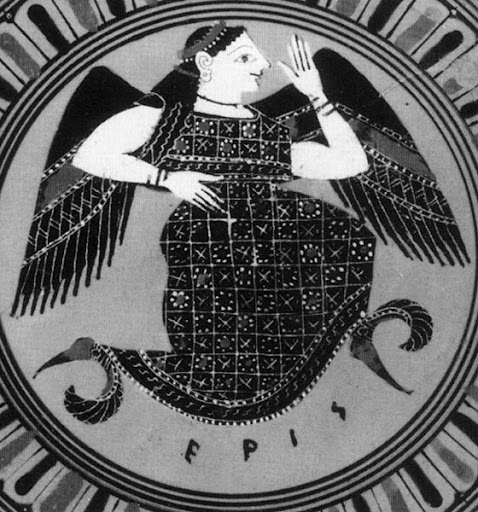 Eris is the goddess of discord and strife.

The number and letters of an object’s temporary designation are hard to remember. Also, it took some time to formally name Eris because of the uncertainty of its classification. Because of that, it was nicknamed Xena, from a TV show.

According to the discovery team, they chose the name because it started with the letter X, as in planet X. At the time, it was unclear whether Eris would be classified as a planet or a minor planet. The name Xena was a television character from the show Xena: Warrior Princess. 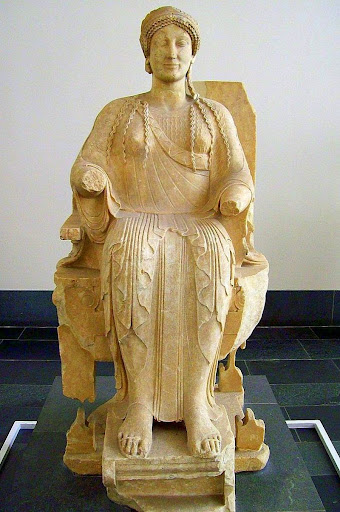 Other names considered were Lila, a concept in Indian philosophy, and Persephone, Pluto/Hades’ wife in Greek mythology. Finally, the name Eris was approved by the International Astronomical Union (IAU) on September 13, 2006. It was inspired by the Greek goddess of discord and strife.

The dwarf planet’s moon was named after the daughter of Eris, Dysnomia. She was the deity of lawlessness, wreaking havoc just like her mother. This moon was given the nicknames Dy and Gabrielle before it was formally named. Gabrielle was the sidekick of the TV character Xena, the inspiration for Eris’s earlier nickname.

Eris was given the minor planet designation (136199) Eris while its moon, Dysnomia, was designated Eris I. 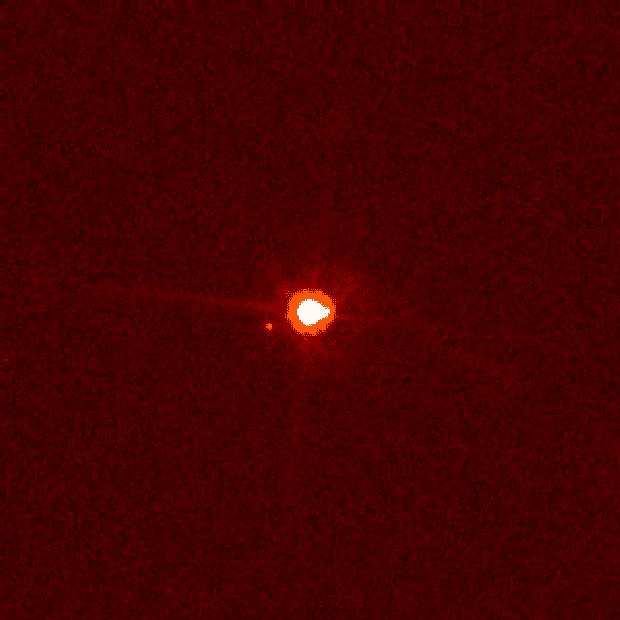