In our guide, we explore a variety of cool Neptune facts, in short and long form. From quality bits of trivia, Neptune facts for kids, to details about the atmosphere and planetary interior. So let’s get started!

Size of Neptune compared with the Earth

When scientific discoveries are made there is often a debate (sometimes heated) as to who deserves credit. The discovery of Neptune is one such example. Shortly after the discovery of the planet Uranus in 1781, scientists noticed that its orbit had significant fluctuations that were not expected. To solve this mystery, they proposed the existence of another planet whose gravitational field would account for such orbital variances.

In 1845, the English astronomer John Couch Adams completed his calculations as to the position of this unknown planet. Although he submitted his findings to the Royal Society (the leading English scientific organization), his work was met with little interest. However, a year later the French astronomer Jean Joseph Le Verrier made known his calculations that were strikingly similar to those of Adams. As a result of the two men’s independent estimates being so close, the scientific community took notice and began its search for the planet in the region of the sky Adams and Le Verrier had predicted. On September 23, 1846, the German astronomer Johann Gall observed the new planet near to where Adam’s calculations had forecasted and even closer to those of Le Verrier.

Le Verrier was initially given credit for the discovery. As a result, an international dispute arose, with one faction championing Adams and the other Le Verrier. This conflict, however, was not shared between the two men themselves. Eventually, the campaign for each side cooled, and both men were given credit.

Until the Voyager 2 spacecraft fly-by in 1989, little was known about Neptune. This mission provided new information about Neptune’s rings, number of moons, atmosphere and rotation. Additionally, Voyager 2 discovered significant features of the moon Triton. There are no official planetary missions scheduled to Neptune in the near future.

Neptune Facts On The Atmosphere

Neptune’s upper atmosphere is composed of 80% hydrogen (H2), 19% helium and trace amounts of methane. Similar to Uranus, the blue coloration of Neptune is due in part to its atmospheric methane, which absorbs light having a wavelength corresponding to red. Unlike Uranus, Neptune is a deeper blue, and, therefore, some other atmospheric component must be present in the Neptunian atmosphere that is not found in Uranus’ atmosphere.

Two significant weather patterns have been observed on Neptune. The first, seen during the Voyager 2 fly-by mission, are the Dark Spots. These are storms comparable to the Great Red Spot found on Jupiter. However, a difference between these storms is their duration. Whereas the Great Red Spot has lasted for centuries, the Dark Spots are much more shortly lived as is evident by their disappearance when Neptune was viewed by the Hubble Space Telescope just four years after the Voyager 2 fly-by.

The second of the two weather patterns observed by Voyager 2 is the swiftly moving white storm system, nicknamed Scooter. This type of storm system, which is much smaller than the Dark Spots, also appears to be short-lived.

As with the other gas giants, Neptune’s atmosphere is divided into latitudinal bands. The wind speed achieved in some of these bands is almost 600 m/s, the fastest known in the Solar System.

Neptune Facts On The Planetary Interior

The interior of Neptune, similar to that of Uranus, is made of two layers: a core and mantle. The core is rocky and estimated to be 1.2 times as massive as the Earth. The mantle is an extremely hot and dense liquid composed of water, ammonia and methane. The mantle is between ten to fifteen times the mass of the Earth.

Although Neptune and Uranus share similar interiors, they are, however, quite distinct in one way. Whereas Uranus emits only about the same amount of heat that it receives from the Sun, Neptune emits nearly 2.61 times the amount of the sunlight it receives. To place this in perspective, the two planets’ surface temperatures are approximately equal, yet Neptune receives only 40% of the sunlight that Uranus does. Additionally, this large internal heat is also what powers the extreme winds found in the upper atmosphere.

With the discovery of Neptune, the size of the known Solar System increased by a factor of two. With an average orbital distance of 4.50 x 109 km, it takes sunlight almost four hours and forty minutes to reach Neptune. Moreover, this distance also means that a Neptunian year lasts about 165 Earth years!

Neptune’s orbital eccentricity of .0097 is second smallest behind that of Venus. This small eccentricity means that the orbit of Neptune is very close to being circular. Another way of looking at this is to compare Neptune’s perihelion of 4.46 x 109 km and its aphelion of 4.54 x 109 km and notice that this is a difference of less than two percent.

Like Jupiter and Saturn, Neptune rotates very quickly as compared to the terrestrial planets. With a rotational period of a little over 16 hours, Neptune has the third shortest day in the Solar System.

The axial tilt of Neptune is 28.3°, which is relatively close to the Earth’s 23.5°. What is amazing is that, even at such a far distance from the Sun, Neptune still experiences seasons (though more subtly) similar to those on Earth as a result of its axial tilt.

Currently, Neptune is known to have fourteen moons, with the latest one only discovered in 2013. Of these 14 only one is large and spherical in shape. This moon, Triton, is believed to have originally been a dwarf planet captured by Neptune’s gravitational field, and, thus, not a natural satellite of the planet. Evidence for this theory comes from Triton’s retrograde orbit of Neptune; that is, Triton orbits in the opposite direction that Neptune rotates. With a recorded surface temperature of -235° C, Triton is the coldest known object in the Solar System.

Neptune has five major rings – Adams, Arago, Lassell, Le Verrier and Galle. There may also be a sixth which is a currently unnamed co-orbital ring with the moon Galatea. This ring system is much fainter than that of the other gas giants. In fact, some of the rings are so dim that it was believed at one time that they were incomplete. However, images from the Voyager 2 fly-bys show extremely faint rings.

Ad well as the rings, The Neptunian system is also home to a series of 4 prominent ring arcs, which are essentially clumps of dust.

Neptune In Mythology – How Did Neptune Get Its Name?

In Roman antiquity and mythology, Neptune is the Roman god of the sea, and a son of Saturn, along with Jupiter and Pluto.

It was calculations by astronomer Urbain Le Verrier in 1845 that predicted the existence of the planet Neptune, as the result of irregularities in the orbit of Uranus that an undiscovered planet could have been causing. These calculations were also independently theorised by John Couch Adams. One year later in 1846, Johann Galle became the first person to observe the planet Neptune by means of telescope at the Berlin Observatory. Galle did not have the honor of naming the planet though, that right was reserved for Verrier.

Neptune was not the first suggested name for the planet. But following in the same fashion as the planets that were discovered before it, the name of a Roman god seems only fitting. Given it’s blue, ocean world appearance and the pattern of naming planets after gods, it seems as though Neptune’s name was destined before it had even been observed.

Why Is Neptune Blue?

Neptune can reveal many colors in its clouds, but the most dominant feature by far is the abundant blue. This color is the result of the thick methane atmosphere absorbing light in the red and infrared ranges.

How Many Rings Does Neptune Have?

Neptune has 5 named rings – Adams, Arago, Lassell, Le Verrier and Galle – and one possible un-named co-orbital ring. There are also 4 ring arcs – Liberté, Egalité, Fraternité and Courage. The rings are thought to be quite a recent and short-lived features around Neptune.

How Long Is A Day On Neptune?

Does Neptune Have A Surface?

Like the Gas Giants, Neptune does not have a solid surface. The Ice Giants atmosphere is made up mostly of Hydrogen and Helium. Neptune also has a small but influential amount of atmospheric Methane too. Influential, in that the Methane plays a great part in the color of the planet. This gassy atmosphere extends deep into the exterior until the gases merge into thicker icy liquids. These icy layers surround a small rocky core, similar to Earths.

What Is Neptune Made Of?

Neptune is the densest of the giant planets. While the atmosphere of mostly Helium and Hydrogen are vast, most of the mass – around 80% is in the watery and icy layers above the rocky core. These denser, icy layers are made up of water, ammonia and methane mostly. Winds can be so fierce on Neptune that ice clouds of methane are violently blown around.

What Is Neptune’s Great Dark Spot?

The Great Dark Spot, was a storm first spotted on Neptune in 1989 by Voyager 2, much like Jupiter’s Giant Red Spot. The main difference between Neptune’s storms and the great red spot on Jupiter, is that the latter has lasted for hundreds of years, whereas Neptune’s storms are much shorter lived. There have been a few similar storms spotted since the great dark spot was first observed. These storms are large anti-cyclonic events. Neptune appears to spend around half of its existence with one of these storms on its surface.

Does Neptune Have Water?

Possibly. It has been conceived that Neptune may have vast oceans under it’s icy layers. But these oceans would be very, very hot, prevented from escaping by huge pressures above. 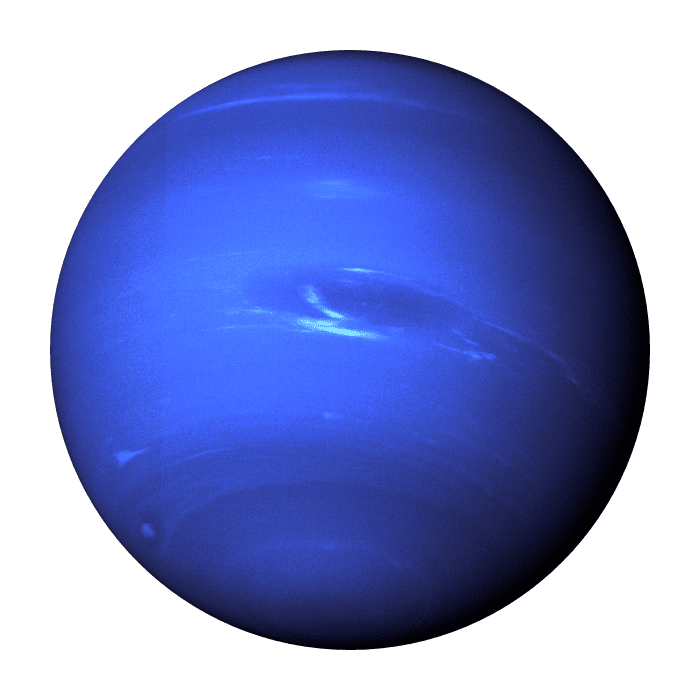