Size of the Earth compared to the Moon

More information and facts about Earth

Throughout human history we have sought to understand our home planet. However, the learning curve has been steep, with many errors having been made along the way. For example, it was not until the time of the ancient Romans that the world was understood to be spherical rather than flat. A second example is the belief that the Sun revolved around the Earth. Only in the sixteenth-century, through the work of Copernicus, did we accept that, in fact, the Earth was merely a planet orbiting the Sun.

Perhaps most importantly, it is during the last two centuries that science has allowed us to see that the Earth is both an ordinary and unique place in the Solar System. On one hand, many of its characterisitcs are rather unexceptional. Take, for example, its size, interior, and geological processes— the fifth largest out of the eight planets, it is close to the median in terms of size; its interior structure is almost identical to the three other terrestrial planets; and the same geological processes that shape its surface can be found not only on other planets, but also on planetary moons. However, the Earth is special in one very important regard— all of the solar system, the Earth is the only world known to foster life.

The ability for Earth to possess life is dependent in many ways on its atmosphere. The composition of the atmosphere is roughly 78% nitrogen (N2), 21% oxygen (O2), 1% argon, with trace amounts of carbon dioxide (CO2) and other gases. Nitrogen and oxygen are essential to DNA and biological energy production, respectively, without which life could not be sustained. Additionally, the oxygen found in what is known as the ozone layer of the atmosphere protects the surface of the planet by absorbing harmful solar radiation.

When viewing Earth from space, there is one overwhelming feature— oceans of liquid water. In terms of surface area, these oceans cover approximately 70% of the Earth. What is even more amazing than this percentage is that a single drop of liquid water is yet to be found on any other planet in the Solar System. In this regard, the Earth is truly unique.

Like the Earth’s atmosphere, the presence of liquid water is vital for life. In fact, life is believed to have first developed 3.8 billion years ago in the oceans, only later evolving the ability to survive on land.

The existence of the oceans is attributed to two sources. The first of these is the Earth itself. It is conjectured that large amounts of water vapor were trapped wintin the Earth during its formation. Over time, the planet’s geological mechanisms, primarily its volcanic activity, released this water vapor into the atmosphere. Once in the atmosphere, this vapor condensed and fell to the planet’s surface as liquid water. The second source is theorized to have originated from the ancient comets that struck the Earth. Upon impact, they deposited substantial amounts of water ice on the planet.

Although most of the Earth’s surface lies beneath its oceans, the remaining “dry” surface is quite remarkable. When comparing the Earth to other solid bodies in the Solar System, its surface stands out due to its lacking impact craters. It is not that the Earth has been spared the numerous impacts by small bodies; rather, it is because the evidence of these impacts has been erased. Although there are many geological processes responsible for this, the two most important are weathering and erosion. In many ways these two mechanisms can be thought of as working in tandem.

Thus, impact craters have been “smoothed out” through weathering and erosion by being broken apart and redistributed to other areas on the Earth’s surface.

Two other geological mechanisms have helped to shape the Earth’s surface. The first is volcanic activity. This process consists of the releasing of magma (molten rock) from the Earth’s interior through a rupture in the its crust. Some effects of volcanic activity can be the resurfacing of Earth’s crust or formation of islands (think of the Hawaiian Islands). The second mechanism is orogeny, or the formation of mountains through the compression of tectonic plates. An example of mountains created through this process is the Rocky Mountains.

Similar to the other terrestrial planets, Earth’s interior is believed to consist of three components: a core, a mantle, and a crust. At present, the core is thought to be comprised of two separate layers— inner core composed of solid nickel and iron, and an outer core composed of molten nickel and iron. The mantle is very dense and almost entirely solid silicate rock; its thickness is roughly 2,850 km. Finally, the crust is also composed of silicate rock and varies in thickness. While the continental crust ranges from 30 to 40 km in thickness, the oceanic crust is much thinner at only 6 to 11 km.

Yet another distinguishing feature of the Earth when compared to the other terrestrial planets is that its crust is divided into cool, rigid plates that rest upon the hotter mantle below. Furthermore, these plates are in constant motion. Along the boundaries of these plates two processes, known as subduction and spreading, can occur. During subduction two plates come into contact (sometimes violently, producing earthquakes) and one plate is forced under the other. Separation, on the other hand, is when two plates are moving away from each other.

At roughly 365 days, the Earth’s orbit around the Sun is familiar to us. The length of our year is due in large part to the Earth’s average orbital distance of 1.50 x 108 km. What many people are not familiar with is that at this orbital distance it takes sunlight, on average, about eight minutes and twenty seconds to reach the Earth.

With an orbital eccentricity of .0167, the Earth’s orbit is one of the most circular in all the Solar System. This means that the difference between Earth’s perihelion and aphelion is relatively small. As a result of this small difference, the intensity of the sunlight Earth receives remains almost constant year-round. However, the Earth’s position in its orbit is responsible, in part, for the varying seasons it experiences.

The Earth’s axial tilt is approximately 23.45°. That is, the axis the Earth rotates about is tilted slightly with respect to the plane in which the Earth orbits the Sun. The effect of this tilt, along with position of the Earth in its orbit, means that at certain times the amount of sunlight the northern hemisphere receives is greater than that of the southern hemisphere, and vice versa. This variation in intensity is what produces the warmer temperatures during the summer and colder temperatures during the winter.

A second commonly know charecteristic is that the Earth takes approximately twenty-four hours to complete one rotation. This is fastest among the terrestrial planets, but easily slower than that of all the gas planets. 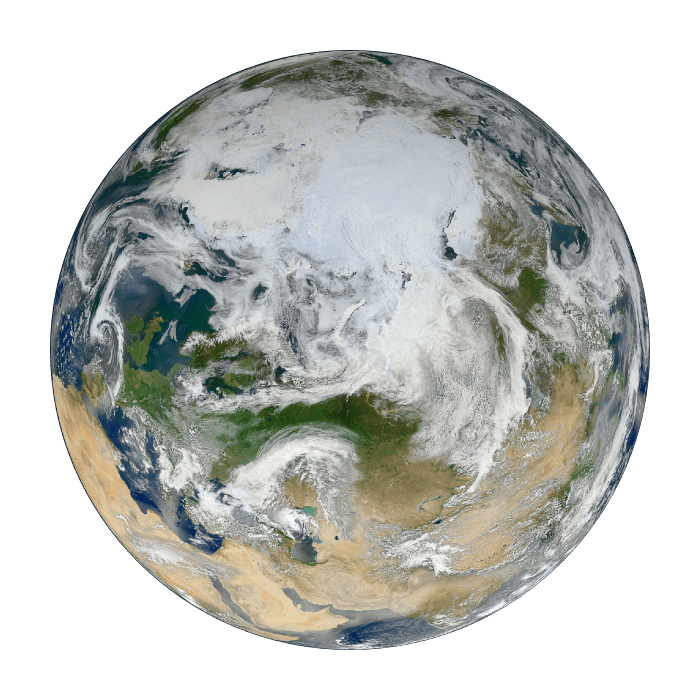