Size of the Moon compared to the Earth

Moon Facts – History Of The Moon

Millions of people around the world look up at night and marvel at a misty bright glowing round object – the Moon.

Far fewer understand the Moon’s own history, what a Moon day or night is like in comparison with a day or night on Earth, what kind of material the Moon is composed of or how important the Moon is to the Earth itself.

The history of the Moon is rich no matter how it is approached. The Moon has spawned many a myth and legend along with the many facts about it that are known today. Early religions incorporated the Moon’s phases into rites and rituals, and some still do this today.

The Romans named the moon Luna. The Greeks called it Selene and Artemis. after the greek mythical Gods and Goddesses.

Early astronomers keen to uncover the facts behind the Moon’s orbit and different phases contributed much to the modern history of the Moon that humankind is still compiling today. In this article, learn the history of the Moon and uncover a new wonder and appreciation for the Earth’s nearest neighbor.

What Is the Moon?

At its most fundamental, the Moon is an astronomical body. But that is not all. The Moon is also the Earth’s only permanent satellite.

The Moon is also the brightest object in the Earth’s night sky, second only to the Sun itself.

The Moon is called a terrestrial planet, a category it shares with the Earth itself as well as Mars, Venus and Mercury. (In contrast, the more distant planets are called Jovian or giant planets.)

Interestingly, a band of asteroids separates the Moon and its neighboring terrestrial planets from the outer giant planets.

The Moon is about 238,856 miles (384,402 km) away from the Earth. At this distance it takes about three full days for astronauts to travel from the Earth’s surface to land on the Moon.

The exact amount of time it takes to reach the Moon depends on the route taken. The majority of the moon’s surface is covered with regolith, which is a combination of very fine dust and rocky debris. This comes from billions of years of meteor impacts.

Get to Know the Moon

Today, astronomers know that the Moon is slowly moving away from the Earth. But at the rate it is traveling, about 1.5 inches (4 cm) per year, it will be a long time before the two part ways.

Currently it takes the Moon about 27 days and eight hours to make a complete rotation around the Earth.

Interestingly, there are times when the Moon will wobble just a slight amount because its orbit is not completely circular. So sometimes it is possible to see just a tiny bit of the far side.

However, astronauts have also been able to capture photos and videos of the far side of the Moon using satellite technology.

The Moon has a monthly cycle just like the Earth. The Moon’s cycle is called the lunar or synodic cycle.

The monthly cycle measures the amount of time it takes for the Moon to move from one new moon to another new moon. Currently, it takes the Moon about 29 days and 5 hours, or 709 hours total, to do complete a cycle, or lunar month.

The way the Moon appears when viewed from Earth is called “phases.” Astronomers can use these phases to precisely predict how and when the Moon will appear in the sky, which is called a “lunar calendar.”

Sometimes the Moon is barely visible if at all, while other times it is huge and round and bright phase. The amount of visibility is caused by the relationship between the Sun, the Earth and the Moon. When more Sun is reflecting off the Moon’s surface, more of the Moon will appear to be visible in the sky. There are also supermoon cycles and you can read more about that in our dedicated supermoon facts post.

The New Moon phase is when the moon is least visible. It may be seen as a tiny sliver or crescent or not visible at all.

The Waxing Crescent phase arrives when the Moon appears more like a slim crescent (about one-eighth of the Moon’s full size) that is readily visible.

In the First Quarter phase, one-quarter of the Moon is clearly visible from Earth.

The Waxing Gibbous phase shows a full one-half of the Moon’s Earth-facing surface in the sky.

The Full Moon phase is when the Moon is at its brightest, appearing as a full, round, sunlight-illumined circle in the sky.

The Moon is bigger than Pluto, so why isn’t the Moon considered a planet like the Earth?

All of this is governed by an organization called the International Astronomical Union (IAU). According to the IAU, a natural satellite cannot belong to two categories. In other words, the Earth’s Moon cannot be a moon and a planet, too. So the Moon is considered a moon and not a planet.

However, the Moon and Earth share a lot of planet-like qualities.

Here are three of the most fascinating shared qualities.

1. Both the Moon and the Earth have three layers (from outer to inner): mantle, crust, core. This means the Moon is formed like a planet forms.

2. Both the Moon and the Earth are still active geologically. This means both still have evolving rock surfaces. Moon rock formations are constantly changing.

What Caused the Moon to Form?

To date, scientists believe the modern Moon formed around 4.6 billion years ago, although some new data is beginning to suggest it formed even earlier than this.

The current reigning theory on how it formed is called the “giant impact hypothesis.”

This hypothesis states that when the planet that was to become the Earth collided with another planet that astronomers call Theia, which was about the same size as the planet Mars, the collision caused Theia to break apart into smaller pieces.

These pieces, in turn, gathered in around the Earth as it formed. The fragments were held together by the Earth’s gravitational pull as well as gravitational influences from neighboring planets. These diverse fragments eventually came together to form the Moon.

Interestingly, more recent research (2016 and 2019) has put forth three new insights about the Moon’s formation and origins.

Additional hypotheses continue to exist regarding the Moon’s formation. Since no one was there when it happened, astronomers continue to revisit each theory as new evidence becomes available.

These are the five best-known and most enduring theories about the Moon’s creation.

1. The “Theia event” as just described.
2. Another event split a single planetary body into two new bodies: the Earth and the Moon.
3. An earlier protoplanetary disc (a spinning disc of gas and dust that often surrounds a newly-forming star) created both the Earth and the Moon at the same time.
4. An asteroid collided with the Earth and the fragment that broke away became the Moon.
5. The Moon was originally its own independent moon that was pulled into Earth’s gravitational field and trapped in a permanent rotation.

While some of these theories may sound far-fetched, each theory does have some amount of evidence.

What Is the Relationship Between the Moon and Earth?

As mentioned earlier, the Moon and Earth are in synchronous rotation.

It is this synchronous rotation that is responsible for the influence the Moon has on Earth’s tides and water supply.

While it can be mind-boggling to watch the ocean tides come in and flow out and realize this happens in large part because of the Moon (and also because of gravitational influence from the Sun), this is, in fact, the truth.

Basically, tides occur because the Moon is pulling the Earth’s water supply towards itself. This causes a “bulging” effect on either side of Earth. When the oceans bulge outward from Earth’s surface, they are bulging in the direction of the Moon. High tide is when the gravitational pull from the Moon is at its strongest.

The Moon isn’t surrounded by gases, which is why it does not have an atmosphere.

However, it may still have some water trapped inside its layers of rock. If present, this water is thought to be in the form of ice at either pole.

The Moon also has evidence of lava seas in its past history. There are vast pitted areas on the Moon’s surface where lava once flowed. These areas look darker than the rest of the planet’s surface.

Facts about the Moon

More information and facts about the Moon

The Moon is unique in that it is the only spherical satellite orbiting a terrestrial planet. The reason for its shape is a result of its mass being great enough so that gravity pulls all of the Moon’s matter toward its center equally.

Another distinct property the Moon possesses lies in its size compared to the Earth. At 3,475 km, the Moon’s diameter is over one fourth that of the Earth’s. In relation to its own size, no other planet has a moon as large.

For its size, however, the Moon’s mass is rather low. This means the Moon is not very dense. The explanation behind this lies in the formation of the Moon. It is believed that a large body, perhaps the size of Mars, struck the Earth early in its life. As a result of this collision a great deal of the young Earth’s outer mantle and crust was ejected into space. This material then began orbiting Earth and over time joined together due to gravitational forces, forming what is now Earth’s moon. Furthermore, since Earth’s outer mantle and crust are significantly less dense than its interior explains why the Moon is so much less dense than the Earth.

When viewed from Earth, the many impact lunar craters found on the lunar surface are visible. The reason for this is simple. Unlike the Earth, the Moon is not geologically active, and so it does not possess an atmosphere nor does it possess volcanic activity. Consequently, the Moon does not undergo resurfacing as does the Earth. 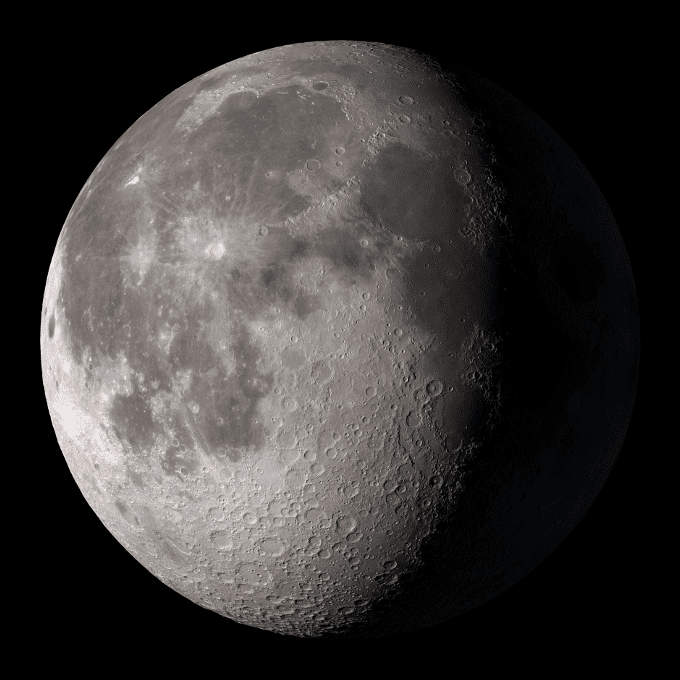