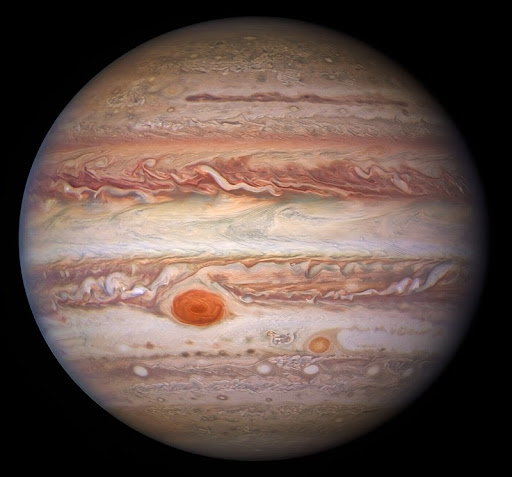 Among the eight planets in the solar system, Jupiter stands mightily as the largest and the most massive member. It is one of the outer planets, the other being Saturn, Uranus, and Neptune.

Jupiter is the fifth planet from the Sun and is a wonderful system of its own. This gas giant is surrounded by 79 moons. Also, it shares its orbit with the interesting minor planets called trojan asteroids.

Aside from these objects, there is also something big that is happening on the king of the planets itself—the Great Red Spot!

The Great Red Spot is a massive storm located 22° in the southern hemisphere of Jupiter. It is an anticyclone with the wind circulating on a high-pressure center. The storm moves counterclockwise, with a rotational period of roughly 7 Earth days.

When it was first observed, around halfway through the 1800s, it was said that the storm could engulf about three Earths. That means the Great Red Spot is getting smaller. Since it is smaller, the rotation period of this storm has also decreased over time.

Nevertheless, despite years of observation, there is still much to learn about this colossal storm. 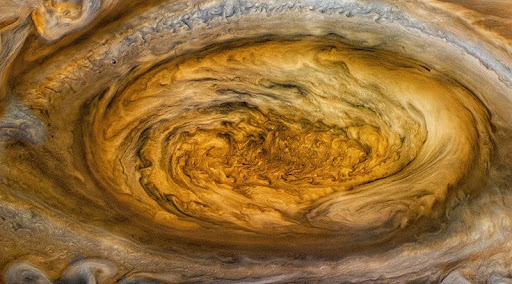 A spot was observed on Jupiter from 1665 to the early 1700s. If it is the same storm, then the Great Red Spot has been around for more than 300 years.

There is no conclusive evidence, however, that it was indeed the same spot. Formal observations of the Jupiter Spot started in September 1831. And from then on, in 1878, continuous monitoring began.

Sometimes, it swallows smaller storms as well, which keeps it spinning and makes it even more powerful.

Observations from the late 1870s show that this storm becomes smaller and taller. It goes deeper by more than 320 kilometers (200 miles) into the atmosphere of the giant planet. This means that it extends way deeper than any storms on Earth which are about 15 km (9 mi) from top to bottom. The Red Spot has also changed into a darker orange color over time.

Enormous storms have also been observed on other planets, but none has been as long-lasting as the Jupiter Red Spot. Examples are the Great Dark Spot of Neptune and Saturn’s Great White Spot.

Jupiter’s Great Red Spot is located 22 degrees south of its equatorial region. By looking at pictures of the planet, we can easily see it as a reddish oval in the southern hemisphere of the gas giant.

This swirling storm does not only occur in the upper atmosphere of Jupiter. As NASA’s Juno spacecraft reveals, it goes deeper around 500 kilometers (310 miles) from the cloud tops.

Discovery and Observations Through Time

Jupiter has been known since antiquity because it is the third brightest object in our night sky, after the Moon and Venus. It is hard to miss because it has an apparent magnitude of -2.2.

Even though people can easily see Jupiter by looking up at the sky, it was only in 1610 that the gas giant was observed in detail. The famous Italian astronomer Galileo Galilei invented a telescope that was more advanced than the telescope of his time. He turned it toward Jupiter and he saw its four major moons: Io, Callisto, Europa, and Ganymede.

The Great Red Spot makes Jupiter an even more interesting subject for astronomical observations. In 1831, astronomer Samuel Heinrich Schwabe made the first detailed drawing of this storm. From then on, many observations have been made on the Red Spot.

In the earlier years, in 1665, Giovanni Cassini also observed a spot on the planet. He described it as a “permanent spot.” It could be the same storm, but astronomers are not able to confirm it.

As it turned out, the “permanent spot” was not very permanent. It was last observed in 1713 and the Great Red Spot was seen around 1830s. The long gap in the observations of these phenomena makes it difficult to confirm if they are indeed the same spots.

So Why Is It Red? 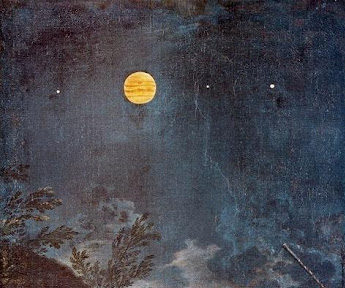 The great storm of Jupiter was depicted in red color for the first time in 1711. It was seen in a painting by Donato Creti which is now placed in the Vatican Museums. Before that, the Jovian storm was not illustrated in any color.

There are still many questions surrounding the Great Red Spot—and one of them is why it is red.

The reason for its reddish color is still a big mystery. However, through laboratory experiments, scientists think it has something to do with the compounds surrounding the planet, particularly ammonia. Cosmic rays, which are an ever-present radiation in space, also play a role in this.

Jupiter’s upper atmosphere is composed of ammonia, with ammonium sulfide clouds below. Water forms the lower level of the clouds. White clouds are produced from these three which, when hit by radiation, split into molecules that can combine to form red-looking compounds.
Jupiter Explorations

In 1973, Pioneer 10 made the first flyby of Jupiter. It opened up a whole new understanding of Jupiter and its system. This flyby obtained photos of the Galilean moon and the Great Red Spot, among others.

The Voyager 1 spacecraft made the next flyby in 1979 which brought us the first close-up look of the Red Spot. It revealed that there is a lot going on in this storm and that the planet has many other smaller storms. From this flyby, we also know that it is moving in a counterclockwise direction.

The Juno mission gave us the most detailed look into the Great Red Spot yet. It made a close approach to Jupiter in 2017 and took interesting images of the famous storm. Because of this flyby, we learned that the Great Red Spot is not only big, but it is also deep.

Shrinking But Speeding Up

Since it has been monitored since 1879, astronomers are able to compare data on the Great Red Spot in the present to how it was a hundred years ago or so.

The Great Red Spot was known for its oval shape but observations show that it is becoming more and more circular as it shrinks. As observed by an amateur astronomer in 2019, it also seems to be “flaking.” Each year, it gets smaller by about 900 km (559 miles). And at this rate, it is projected to become circular by the year 2040.

Although this long-lasting storm is becoming smaller, it has also become stronger, as seen by NASA’s Hubble Space Telescope. Data from the years 2009 to 2020 indicate that the winds on the outer ring of the storm are accelerating. Called the “high-speed ring,” wind speeds in this zone are now around 650 kph (400 miles per hour).

Determining this change was possible because of 11 years worth of data from the Hubble Space Telescope. As of yet, it is the only telescope with this kind of coverage, said Amy Simon (NASA’s Goddard Space Flight Center).

These small changes, which are less than 2.6 km (1.6 miles) per hour per Earth year, would have remained undetected if not for the records of the past decade or so. Even the team that worked on this analysis cannot believe it. As Micheal Wong of the University of California, Berkeley, said, “no one has ever seen this before!”

The central region of the Great Red Spot has a different story to tell. While the outer zone is speeding up, the winds around the center are rather decreasing in speed. 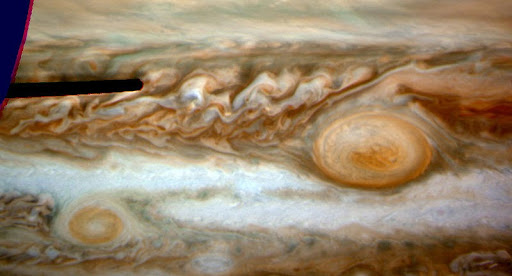 In addition to the Great Red Spot, Jupiter is also home to several smaller storms and eddies. One of these is called Oval BA, which is nicknamed the Little Red Spot or Red Spot Jr. after the eponymous storm.

Just like the Great Red Spot, Red Spot Jr. is also located in the southern hemisphere of Jupiter. It was formed after three storms collided, and was first observed in 2000. Since then, it has become more powerful.

First seen as a white storm, Oval BA started turning red in 2006. In the same year, planetary scientist Amy Simon of NASA and her team used the Hubble Space Telescope to photograph a close passage of the Great Red Spot and Red Jr.

Another close encounter happened in 2008, but this time, with a third smaller spot. This new storm was nicknamed “baby red spot.” It was in the same latitudinal band as the Great Red Spot.

From May to July 2008, these three storms had an encounter that ended up with the baby red spot being swallowed by the Great Red Spot. Red Spot Jr., which is located just below, remained unscathed.

1. What is Jupiter’s Red Spot?

Jupiter’s Red Spot is a very big storm on the gas giant which has existed for more than a hundred years. Though it is growing smaller, it is still big enough to swallow Earth. It is unlike any other storm we have experienced on Earth, and in the entire solar system.

3. Where is the Great Red Spot located?

The Great Red Spot is a storm on Jupiter, the fifth from the Sun. It is located 22 degrees in the southern hemisphere of Jupiter.

4. When was the Great Red Spot first observed and who discovered it?

Many spots have been seen on Jupiter but the first official record of the Great Red Spot was on September 5, 1831. This was illustrated by the drawing of German astronomer Samuel Heinrich Schwabe.

Before that, in 1664, Robert Hooke saw a spot on Jupiter, but it was in the planet’s North Equatorial Belt. In 1665, Giovanni Cassini also observed a spot, which was seen until 1713. There is still no way to tell if it is indeed the same Great Red Spot that was seen in 1831 up until now.

5. Why Does Jupiter Have a Red Spot?

Jupiter’s atmosphere is made up of gases—moving and swirling all around. These swirling winds can combine to form bigger storms. This process was seen in the recently-formed storm, Oval BA or Red Jr. The Great Red Spot is thought to have formed the same way.

Red Jr. formed when three smaller white storms merged. Now, it has turned into a reddish color just like the Great Red Spot. Since Jupiter is a gas giant, it has no solid ground to slow down these winds. This is why the storms on gas giants are more violent.

Also, the Great Red Spot swallows smaller storms that come near it. This could be one reason that fuels this gigantic storm, making it last even longer.

Discovery and Observations Through Time: By NASA – This image or video was cataloged by Jet Propulsion Laboratory of the United States National Aeronautics and Space Administration (NASA) under Photo ID: PIA02855., Public Domain, https://commons.wikimedia.org/w/index.php?curid=1976022

So Why Is It Red?: By Donato Creti – Pinacoteca Vaticana, Public Domain, https://commons.wikimedia.org/w/index.php?curid=48553214

Shrinking But Speeding Up: By NASA/JPL/University of Arizona – From http://photojournal.jpl.nasa.gov/catalog/PIA02863, Public Domain, https://commons.wikimedia.org/w/index.php?curid=616873

Red Spot Jr. and Other Jovian Storms: By NASA, ESA, I. de Pater, and M. Wong (UC Berkeley) – This is a retouched picture, which means that it has been digitally altered from its original version. Modifications: Cropped. The original can be viewed here: Grs junior.jpg: ., Public Domain, https://commons.wikimedia.org/w/index.php?curid=2008991