Facts about the Andromeda Galaxy

A Quick Look at the Numbers 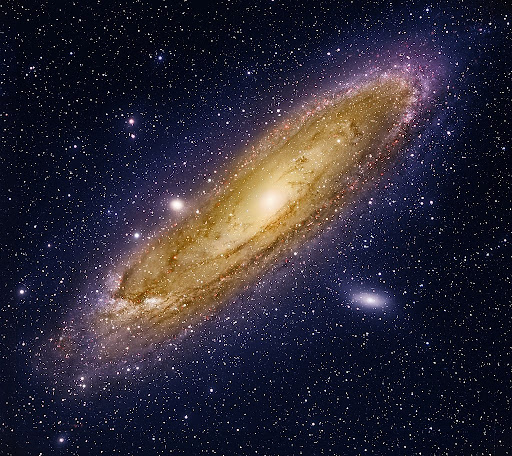 The Andromeda Galaxy is a close neighbor of the Milky Way. Are you wondering why it was given such a name? That’s because, as observed here on Earth, we can see this galaxy in Andromeda Constellation.

This galaxy is also called Messier 31 or NGC 224. We can easily see it with the naked eye since it has an apparent magnitude of 3.44. In fact, it is one of the few distant objects that we can see without using any optical aid.

The Andromeda galaxy is the largest in the Local Group, where the Milky Way also belongs. Not only is this galaxy large, but it is also very massive. Its diameter is around 220,000 light-years and its mass equals the mass of 1,230 billion Suns!

There are about one trillion stars in the Andromeda Galaxy. That’s way more than the 200 to 400 billion stars estimated in the Milky Way. This spiral galaxy lies 2.5 million light-years away from Earth. 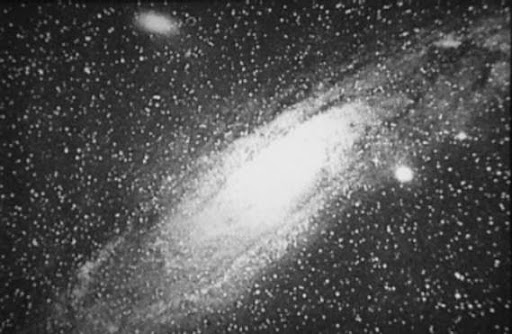 Since it is easily visible to the naked eye on dark nights, the Andromeda Galaxy has been observed many times in the past. The earliest known record of this galaxy was that of Abd al-Rahman al-Sufi. He was a Persian astronomer around the 10th century. Simon Marius, a German astronomer, also gave it a description in the early 1600s.

Before Andromeda became known as the spiral galaxy that we know it today, it was actually thought of as a nebula at first. This so-called nebula was thought to have been part of the Milky Way. At the time, it was believed that our own galaxy is the largest and that it contained everything in it.

The first supernova observed outside the Milky Way was S Andromedae. Also, it remains the only supernova event that was ever observed in the Andromeda Galaxy. It is also called Supernova 1885 after the year it was seen.

At the time, the distance of the Andromeda Galaxy was not yet fully known. It was thought to be just another nearby object in the Milky Way that they called “Nova 1885.”

Charles Messier gave the designation M31 to Andromeda in 1764. And even by then, astronomers had given it some interesting descriptions. Abd al-Rahman al-Sufi called it a “nebulous smear” and for some, it was the “little cloud.” French philosopher Pierre Louis Maupertuis considered it an “island universe.” William Herschel, on the other hand, noted that it is the closest “great nebula” to us.

One of the earliest photographs of Andromeda was taken by Isaac Roberts in 1888. Though, at this time, it was still considered a “spiral nebula,” a field for the formation of new stars.

For a long time, this galaxy was called the Great Andromeda Nebula. Because of this, the Great Debate was held to tackle the real nature of such an object and the universe as a whole. In 1920, astronomers Harlow Shapley and Heber Curtis laid their facts to support their theories. This memorable event took place at the Smithsonian Museum of Natural History.

The Shapley–Curtis Debate opened up different ideas and possibilities of the nature of the universe. Years later, astronomer Edwin Hubble proved Curtis’s claim that Andromeda is, in fact, a separate galaxy.

Hubble was able to do so through Cepheid variable stars. These pulsating stars can be used to measure the distance of objects. Through this, Hubble calculated the distance of the Andromeda Galaxy which is 2.5 million light-years. Also, he was able to prove that the Milky Way is just one of the billions of galaxies out there. 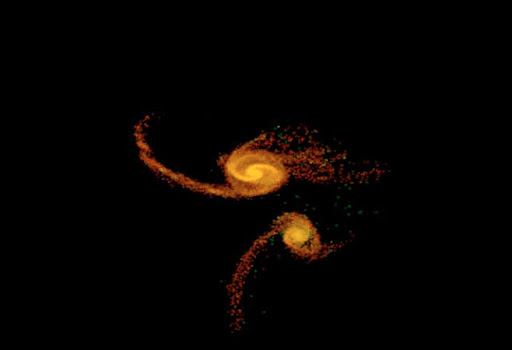 The most probable explanation of the origin of the Andromeda Galaxy involved a merger of protogalaxies. These primeval galaxies were smaller than Andromeda now. They probably collided and merged around 10 billion years ago.

During the time of formation, Andromeda most likely experienced a very high rate of star formation. This activity of stellar formation declined about 2 billion years ago to nearly a level of inactivity. 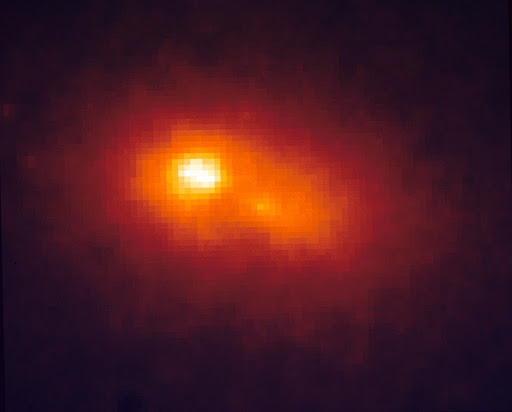 As observed from the Hubble Space Telescope, the core of the Andromeda Galaxy has a double nucleus. These concentrations are designated P1 and P2. P2, or the dimmer concentration, is situated at the center. It contains the central black hole in the galaxy. These two nuclei are 4.9 light-years away from each other. 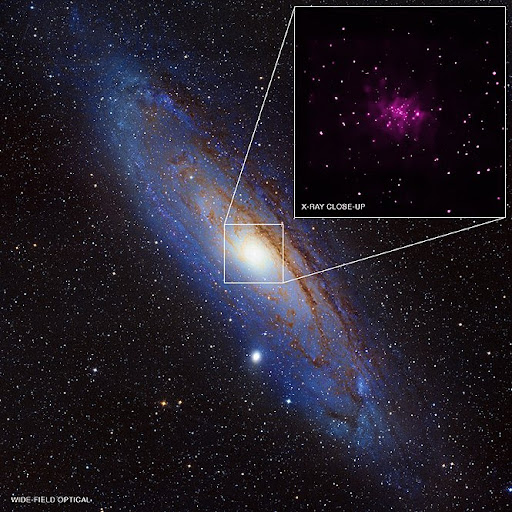 In 2013, NASA’s Chandra X-ray Observatory discovered 26 black hole candidates in this galaxy. This discovery was made by a group of researchers headed by Robin Barnard of the Harvard-Smithsonian Center for Astrophysics. They studied 13 years’ worth of data from Chandra, as well as a wide-field view of the galaxy, to understand Andromeda’s core better. 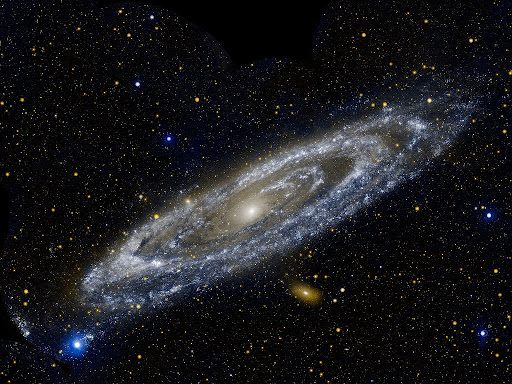 The Andromeda Galaxy is seen nearly edge-on here on Earth, at around 77°. Images from different telescopes show that it has a normal spiral structure. Also, the distortion of its spiral arms is probably because of its interactions with its satellite galaxies Messier 32 and Messier 110.

The ring structures observed in the inner structure of Andromeda may have formed from interactions with Messier 32. This great galaxy shows some similarities to the Milky Way. The Two Micron All-Sky Survey (2MASS) and the Spitzer Space Telescope both reveal that the Andromeda Galaxy has a barred spiral structure.

Observations show that stars on both galaxies’ halos are metal-poor. These are just some of their common characteristics which indicates that their evolutionary paths are probably similar as well.

The Andromeda Galaxy has a massive star cluster in the center. All in all, more than 400 globular clusters were discovered to be related to it. It has a lot of satellite galaxies too.

In 1999, astronomers detected an event called PA-99-N2 in this galaxy. This microlensing event most likely involved a star that hosts a planet. If proven to be true, this will be the first-ever extragalactic planet to be known. The predicted mass of this exoplanet is around 6.34 times the mass of Jupiter. 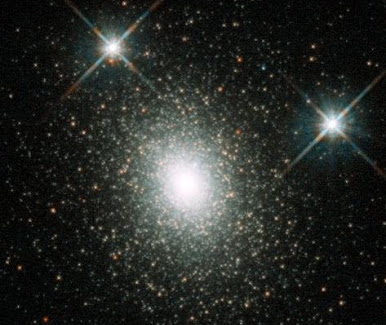 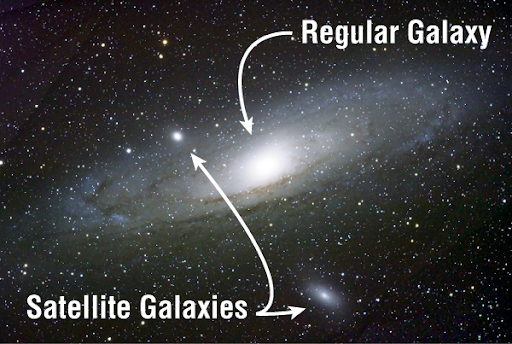 Satellite galaxies are smaller galaxies that orbit the bigger or primary galaxy. Our Milky Way has lots of these satellites. The Andromeda Galaxy has many of them too. The third-largest member of the Local Group, the Triangulum Galaxy (M33), is believed to be one of Andromeda’s many companion galaxies. This, however, is not yet fully proven.

Below are some of the most notable satellite galaxies of the Andromeda Galaxy. 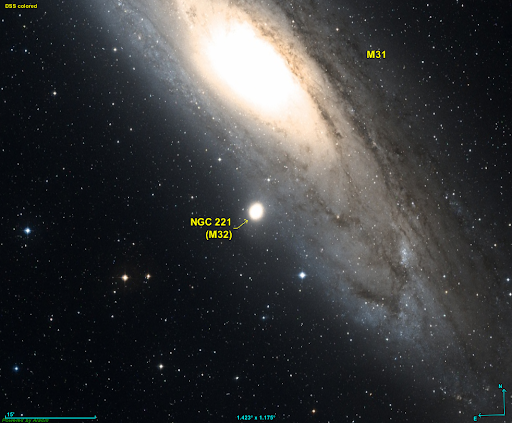 Messier 32 (M32) is also called NGC 221. The French astronomer Guillaume Le Gentil discovered this satellite galaxy in 1749. No star formation has been observed recently in it. Most of the stars that populate this dwarf galaxy have red and yellow hues. Also, most of them are concentrated around the inner core.

One theory about the origin of M32 believed that it may be from M32p—a hypothetical spiral galaxy that merged with M31. Though this is not yet fully proven, simulations show that M32 has had interactions with the bigger Andromeda Galaxy in the past. This event is the reason for the warped shape of Andromeda’s spiral arms.

There is a supermassive black hole in Messier 32 that is about 1.5 times the mass of the Sun. This galaxy lies about 2.65 million light-years from us. 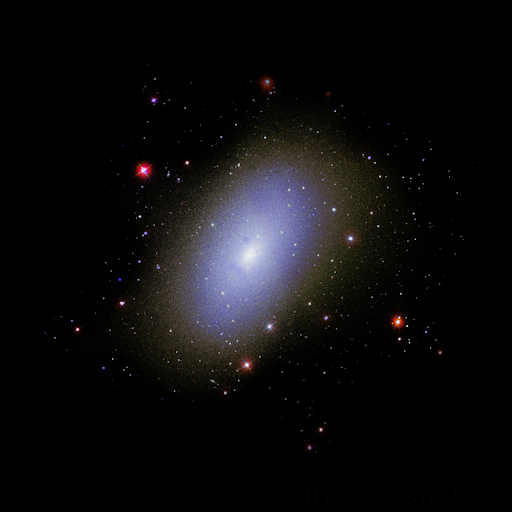 Messier 110 is designated NGC 205 in the New General Catalog. It is classified as a peculiar dwarf elliptical galaxy. The reason for its peculiarity is the unusual presence of young and blue-hued stars around the center. No black hole is detected in this satellite galaxy.

Messier 110 is the last object that was given a designation in the Messier objects list. 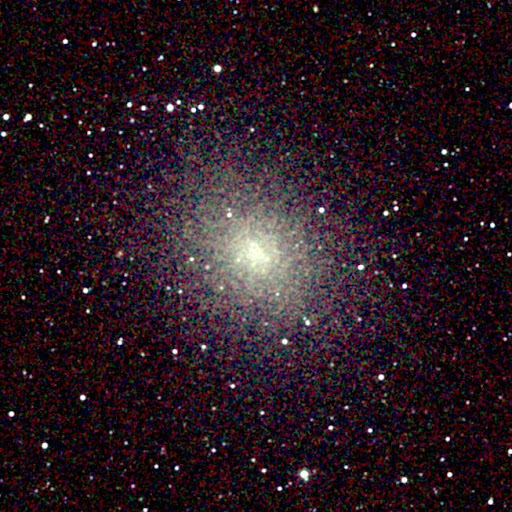 NGC 185 is yet another one of the satellite galaxies of the great Andromeda Galaxy. We can see it in the region of the Cassiopeia constellation in the sky. It was discovered in 1787 by William Herschel. Another designation for it is Caldwell 18.

With an apparent magnitude of 10.1, we can easily see it using small telescopes. The NGC 185 satellite galaxy is a close neighbor to NGC 147 and is 2.08 million light-years distant from us. 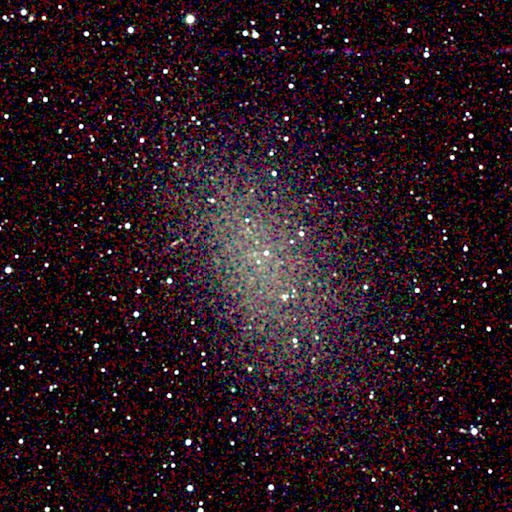 NGC 147 is a dwarf spheroidal galaxy in the Cassiopeia constellation. John Herschel discovered it in 1829. Most stars in this galaxy are already old stars, and not much star formation has been observed. 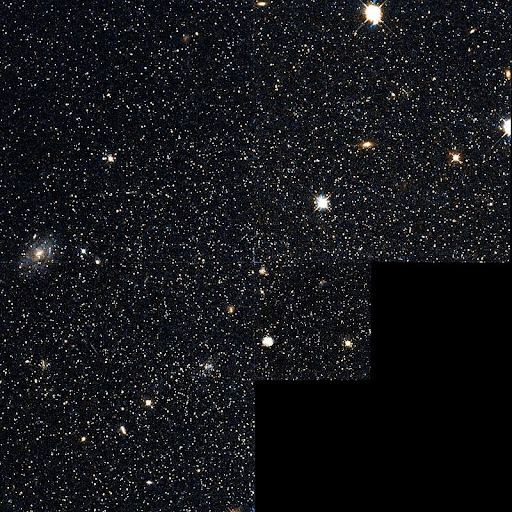 Andromeda I is a close satellite galaxy of M31. It was discovered in 1970 by Canadian astronomer Sidney van den Bergh. Most of the stars that populate this galaxy have red hues. At about 150,000 light-years from M31, this dwarf spheroidal galaxy (dSph) is the closest of its kind to the host galaxy. Meanwhile, it is 2.40 million light-years away from the solar system. 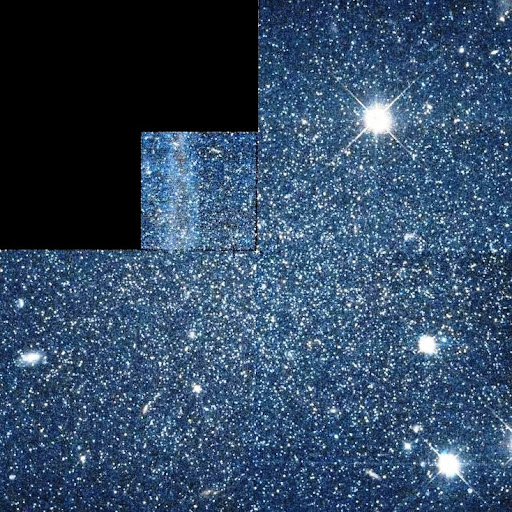 The Pegasus Dwarf Spheroidal Galaxy is found in the constellation of the Winged Horse. We can also call it Andromeda VI. This M31 satellite galaxy has an apparent magnitude of 14.2 so we cannot see it with the naked eye. The stars in this dwarf galaxy are mostly metal-poor.

Collision With Our Own Milky Way

We have seen galaxies collide like NGC 2623 and the Mice Galaxies. However, the Milky Way, where our Solar System belongs, is also set to collide with the Andromeda Galaxy. This is because Andromeda is approaching our way at a rate of 110 kilometers per second (68 mi/sec).

Though it may seem like a scary event, this collision will happen far beyond our lifetime, 4.5 billion years from now. Studies also indicate that because galaxies are mostly empty space, it is unlikely for stars to collide with each other. That said, the Solar System will not be adversely affected.

Even if, say, the Solar System is safe from the collision, life on Earth would have long ended. That is because the Sun would have become so hot at that time. Our planet would dry out and terrestrial life will be no more. Still, all those events are way too far in the future. 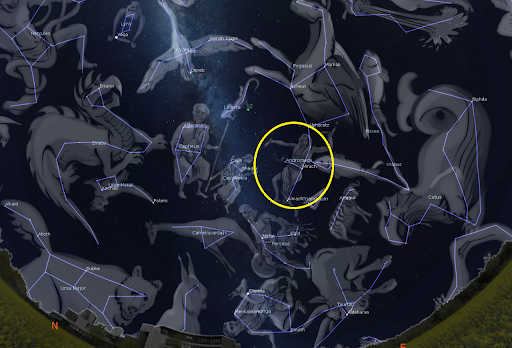 How To Spot Andromeda Galaxy in the Night Sky

Now that we know everything about the Andromeda Gallaxy, it is important to know when and where to find it in the night sky.

The first thing we need to do is find the constellation of Andromeda the Chained Woman. It is mostly seen in the northern hemisphere during the autumn months. By that time, it is spring in the southern hemisphere.

We can easily see the Andromeda constellation because it is surrounded by other famous constellations of Perseus, Cassiopeia, Lacerta, Pegasus, Pisces, and Triangulum. One of the easiest patterns to see in the night sky is the W shape of Cassiopeia. The vertices of this W will point you to Andromeda. 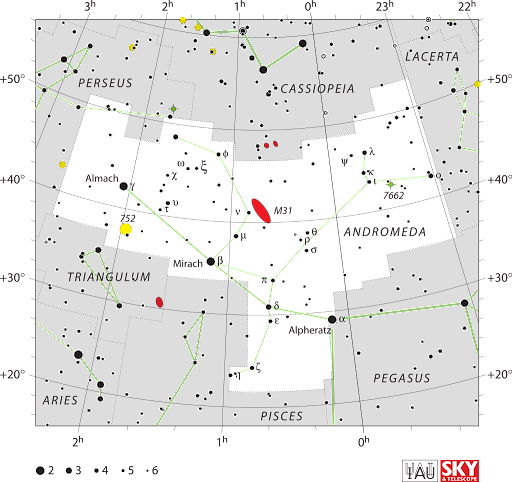 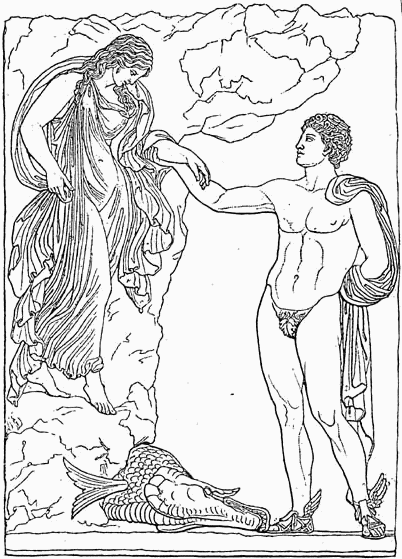 Andromeda has inspired a constellation to be named after her, as well as a galaxy. But who is she in Greek mythology?

Andromeda was a beautiful Ethiopian princess. Her parents were King Cepheus and Queen Cassiopeia. One day, the queen proclaimed that she is more beautiful than the Nereids (sea nymphs).

The sea nymphs hear what the vain queen said, and they were offended by it. Even Poseidon, the sea god, was mad too!

The angry god sent the monster Cetus to the kingdom of Ethiopia. King Cepheus became very worried so he consulted the Oracle of Ammon. The oracle’s vision revealed that the only way to appease the angry god and save the kingdom is to offer his daughter to the sea monster.

King Cepheus followed the advice and let his daughter be chained to a rock, awaiting her death in the hands of the savage sea monster. Luck smiled at princess Andromeda because the hero Perseus unchained her killed Cetus the sea monster. Perseus later married Andromeda and they had children together.

In honor of Andromeda, the goddess Athena placed her in the night sky for everyone to see. Even after death, she remains close in the sky with her loved ones who also became the constellations of Perseus, Cassiopeia, and Cepheus. 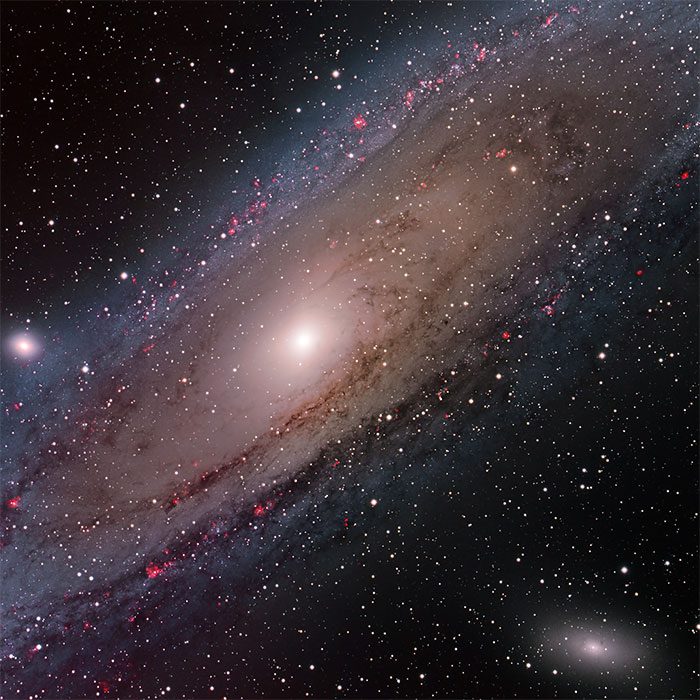