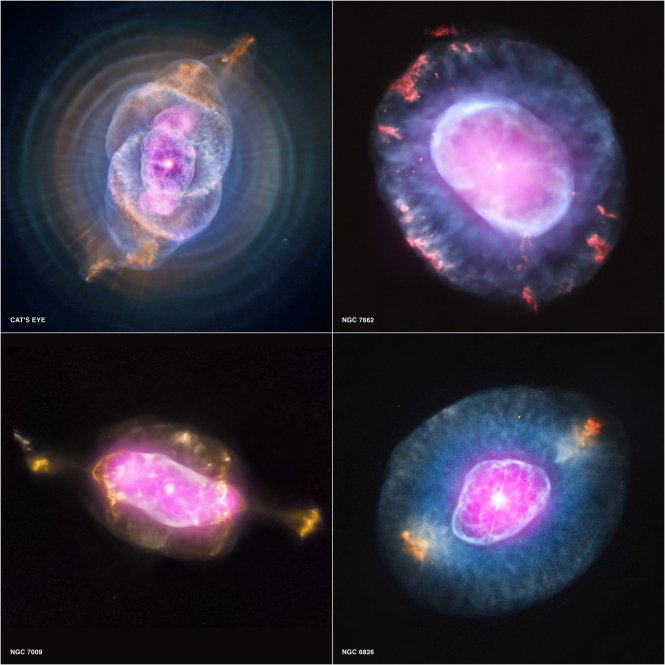 A planetary nebula is a type of emission nebula that consists of an expanding, glowing shell of ionized gas ejected from red giant stars late in their lives. The name “planetary nebula” is a bit misleading as these nebulae actually have nothing to do with planets. The name originates from the planet-like, round shape of the nebulae. Which was observed by early astronomers observing the Solar System. The term was first used by William Herschel.

All planetary nebulae form at the end of the life of a progenitor star of intermediate mass and low mass stars, normally with main sequence masses of 1-8 solar masses. They are a relatively short-lived phenomenon, lasting perhaps a few tens of thousands of years, compared to considerably longer phases of stellar evolution.

Once all of the red giant’s atmosphere has been dissipated, energetic ultraviolet radiation from the exposed hot luminous core, called a planetary nebula nucleus, ionizes the ejected material. This absorbed ultraviolet light then energizes the shell of nebulous gas around the central star, causing it to appear as a brightly coloured planetary nebula.

Starting from the 1990s, NASA’s Hubble Space Telescope images revealed that many planetary nebulae have extremely complex and varied morphologies. Only around 20% of planetary nebulae are spherically symmetric and the variety of the shapes is partially the projection effect

— the same nebula when viewed under different angles will appear different.

However, the reason for the huge variety of physical shapes is not fully understood. The main shapes are classified by different authors into: stellar, disk, ring, irregular, helical, bipolar, quadrupolar and other shapes.

The first one was discovered by Charles Messier in 1764 and was the Dumbbell Nebula in the constellation of Vulpecula.

How is a planetary nebula formed?

A planetary nebula is formed at the end of the life of a star with a mass of between 1-8 solar masses. Gas and dust is ejected from the star and energetic ultraviolet radiation from the exposed hot luminous core, called a planetary nebula nucleus, ionizes the ejected material. This causes a shell of nebulous gas around the central star to glow brightly.

How big is a planetary nebula?

They usually measure around one light year across. The density decreases as they age and expand.

What causes a planetary nebula to glow?

The glow is due to the ionization of the ejected atmosphere by the ultraviolet photons, causing the dust and gas to shine.

How many planetary nebula are there in our galaxy?

What happens after the planetary nebula phase?

The lifespan of this type of nebula is around 30,000 years. As a planetary nebula phase ends, the star becomes a white dwarf, and the expanding gas cloud becomes invisible to us. This gives us an indication as to what will happen to our own Sun when it gets to the end of its life.