Interesting Facts About the Heliopause

What Is the Heliosphere? 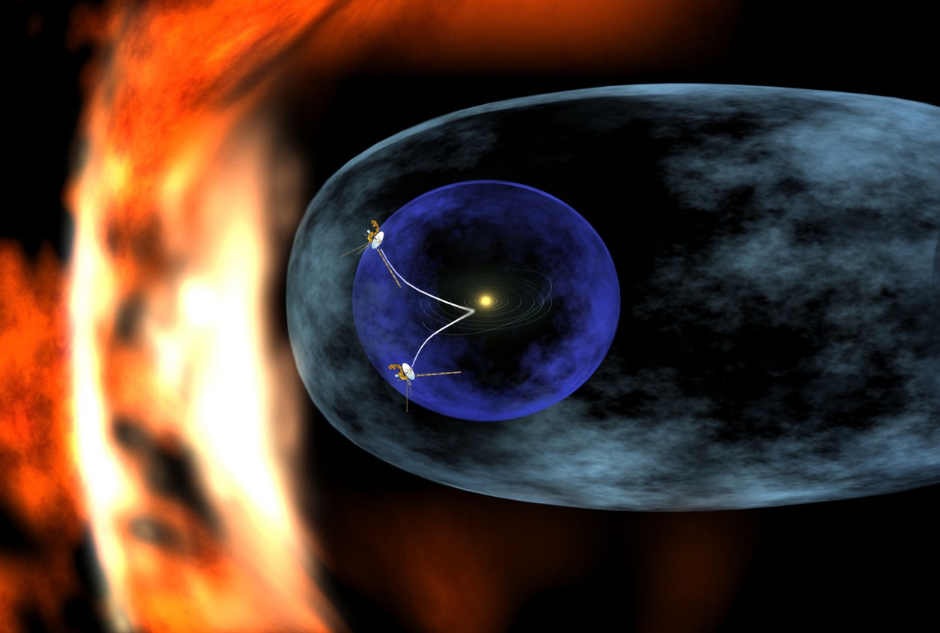 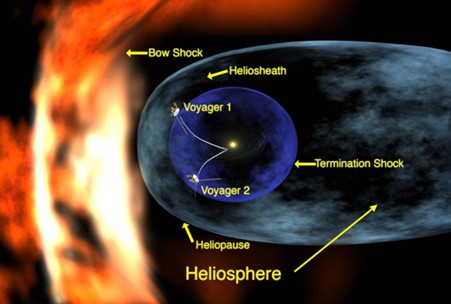 Learning about the heliosphere will help us better understand what the heliopause is.

The heliosphere is a bubble-like structure that surrounds the solar system as it moves through the interstellar medium. It is formed by the constant flow of solar wind pushing against interstellar space or the space between stars in a galaxy. The Sun’s wind and magnetic field dominate and significantly influence this region.

The heliosphere surrounds the solar system and extends way beyond the orbits of the eight planets, and even past the region of Pluto. This bubble-like region protects our solar system from cosmic ionizing radiation.

The heliosphere has different features, these are:

Features of the Heliosphere

Some people believe that outer space is an empty space. However, it is not. The stuff between the stars in our Milky Way galaxy is called the interstellar medium (ISM). The ISM consists primarily of hydrogen and helium (about 99%), with some trace amounts of heavier elements like carbon and oxygen. Interstellar dust makes up about 1% of it.

Basically, the Sun is moving in relation to the local interstellar medium. Emissions from the Sun send out charged particles outwards called the solar wind. It consists of mainly electrons and protons. This stream of particles is blown billions of kilometers from the Sun, traveling at an average speed of 300 to 700 kilometers per second or 700,000 to 1,500,000 miles per hour.

The solar wind is stronger around the Sun but it starts to lose speed as it goes farther out when it reaches the termination shock. At this point, the solar wind abruptly slows down as it begins to be affected by the interstellar medium.

The region between the termination shock and the heliopause is called the heliosheath. It is like a transition region wherein the solar wind travels slower than the speed of light. As a result, the Sun particles pile up and compress, making the solar wind denser and hotter. The neutral atoms in this region form a “ribbon” structure that is likely caused by solar wind particles being sent back into the solar system by the interstellar medium.

The area beyond the heliosheath is the heliopause. In this area, it is thought that the solar wind is not strong enough to push back against the interstellar wind, creating a balance in pressure between the two. This balance causes the solar wind to deflect and go back creating the “heliotail” in its wake—just like how comets look like.

NASA’s Interstellar Boundary Explorer (IBEX), a satellite in Earth’s orbit, found out that the shape of the heliotail is more like a four-leaf clover. The four-lobed tail result was released in 2013.

Another feature called the bow shock is in front of the heliosphere. It forms as the solar wind plasma pushes against the interstellar wind, just like how waves form as a ship plows through the ocean.

How Far Is the Heliosphere From the Sun?

It is believed that the closest boundary of the heliosphere is around 90 to 100 times AU. It means that it extends nearly three times the distance of Pluto and about twice the distance of the inner part of the Kuiper belt from the Sun.

What Is the Heliopause? 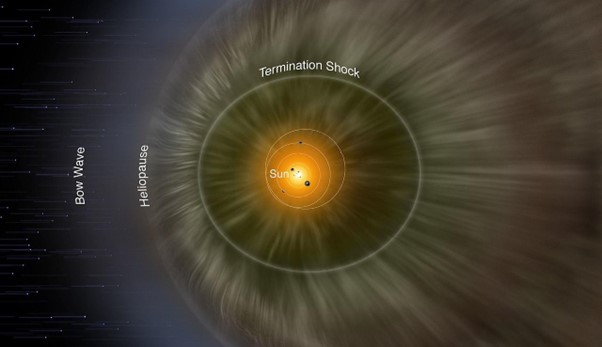 The heliopause is the edge of the heliosphere. There are two things that determine this boundary: the effect of the Sun’s magnetic field and the solar wind.

The solar wind is fluid, a plasma of charged particles or ions that escape the Sun’s surface and is continuously heading outward. Because of this, the heliosphere also has a fluid shape that is influenced by the changes in the solar wind.

For instance, changes in the solar wind pressure affect the heliosphere and its boundaries, especially during the 11-year solar cycle. An example of this was the deep solar minimum in 2009 when there was least solar activity and a very high level of cosmic rays was detected. As a result of these changes, there are also changes in the distance and shape of the heliopause over time.

While it is believed that the heliosphere is shaped like a comet, observations from 2009 suggest that it is more spherical and more like a bubble. This finding has also allowed for changes in how we understand the nature of the heliopause.

There are a couple of factors that indicate when a spacecraft has crossed the heliopause. One is that the temperature of solar wind particles significantly drops while there is an increase in the galactic cosmic rays.

These changes were observed in 2012 when Voyager 1 was approaching the heliopause. In May 2012, the spacecraft detected a rapid increase in cosmic rays while a significant decrease in Sun particles was observed from August to October of the same year. In 2013, NASA announced that Voyager 1 has already crossed the heliopause on August 25, 2012.

How To Determine the Heliopause

The heliopause is a boundary wherein the solar plasma is in equilibrium with the interstellar plasma. We can think of it as the edge of the solar system in terms of the solar wind and the solar magnetic field influence.

The heliopause is located approximately 123 AU from the Sun or 123 times the Sun-Earth distance. This distance is equal to about 18 billion kilometers or 11 billion miles. To compare, the farthest planet, Neptune, is 30 AU from the Sun while the dwarf planet Pluto is 39 AU away.

The heliopause has a fluid shape and is influenced by the Sun’s activity as it moves through space. According to Richard Marsden, a scientist of the European Space Agency (ESA) Ulysses project, “the distance of the heliopause from the Sun changes as the heliosphere breathes in and out on the timescale of the solar cycle.”

The location of the heliopause was discovered when NASA’s Voyager 1 and 2 crossed it in 2012 and 2018, respectively. This boundary was defined when the Voyagers detected a significant decrease in the Sun’s solar wind plasma and an increase in galactic cosmic particles.

Many years before, in 1992, the first evidence of this boundary was detected in powerful radio signals. According to Dr. Don Gurnett, investigator of the Voyager plasma wave subsystem, the signals are created as solar plasma interacts with interstellar gas. Their idea was finally confirmed when the Voyagers reached the milestone some 20 years later.

Another important discovery made by the Voyager mission is that it was found out that the interstellar magnetic field is actually aligned with the Sun’s magnetic field.

Voyager 1 and Voyager 2 in Interstellar Space 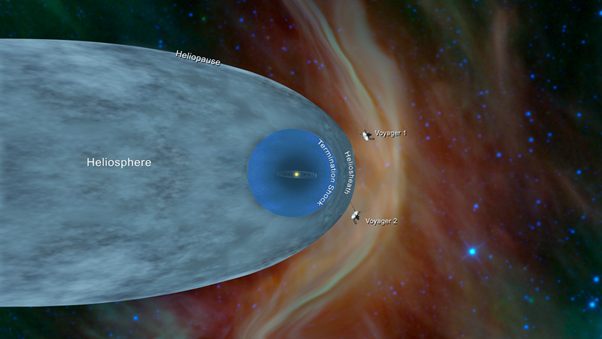 The twin space probes Voyager 1 and 2 are making history as the first man-made spacecraft to ever cross the heliopause. They are now traveling through the interstellar medium.

Voyager 1 launched on September 5, 1977, and Voyager 2 followed it 16 days later. These two have been operating for more than 40 years. According to NASA and JPL, Voyager 1 is already 155.8 AU away from the Sun, as of January 2022. It is the most distant man-made object from Earth. As of February of the same year, Voyager 2 is around 130 AU from the Sun.

Voyager 1 traversed the termination shock in 2004 at a distance of 94 astronomical units (AU). Voyager 2 followed suit and crossed it in 2007 with a lesser distance of 84 AU. This can mean that the heliosphere has an irregular size and shape. One theory is that it must be caused by changes in the Sun during the solar cycle.

Voyager 1 crossed the heliopause and into interstellar space in 2012 and Voyager 2 also reached the milestone in 2018. These two spacecraft have left the heliosphere but they are still in the solar system. They are yet to cross the large Oort Cloud—the outer edge of our solar system.

The New Horizons probe, the first spacecraft to explore Pluto, is predicted to cross the heliosphere and enter interstellar space around the 2040s. 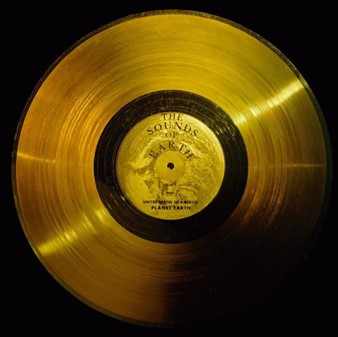 One of the most famous features of the Voyager spacecraft is the “golden records.” These are identical phonograph records that were included aboard the twin probes. The records are like time capsules that contain images and sounds that portray life on Earth. In case other forms of life in the Universe find it, it will give them an idea of what Earth is like. 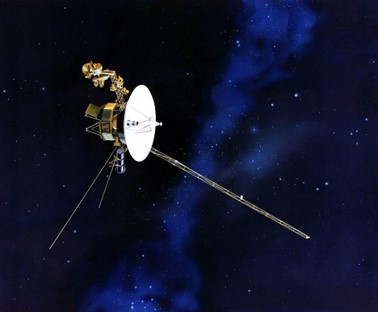 Voyager 2 encountered an increase in temperature and galactic cosmic rays when it crossed the heliopause in 2018. Scientists have predicted this increase but the plasma temperature spiked as soon as the probe reached interstellar space. It was recorded to be around 53,000 to 89,000 degrees Fahrenheit or 30,000 to 50,000 kelvin.

This sort of “wall of fire” is called the Very Local Interstellar Medium (VLISM). Before Voyager 2, the temperature of this region was predicted to be around 15,000 to 30,000 K.

While there was certainly a great increase in temperature, the plasma density is actually low. And because of this, the Voyager 2 probe was able to pass through it without a problem.

The high temperature indicated the heat contained in the individual particles—not the total heat energy in the region. Since this is a low-density environment, the molecules are far very apart and therefore have low thermal mass. As a result, the Voyager 2 spacecraft was able to pass through the heliopause easily.

What Is Beyond the Heliopause? 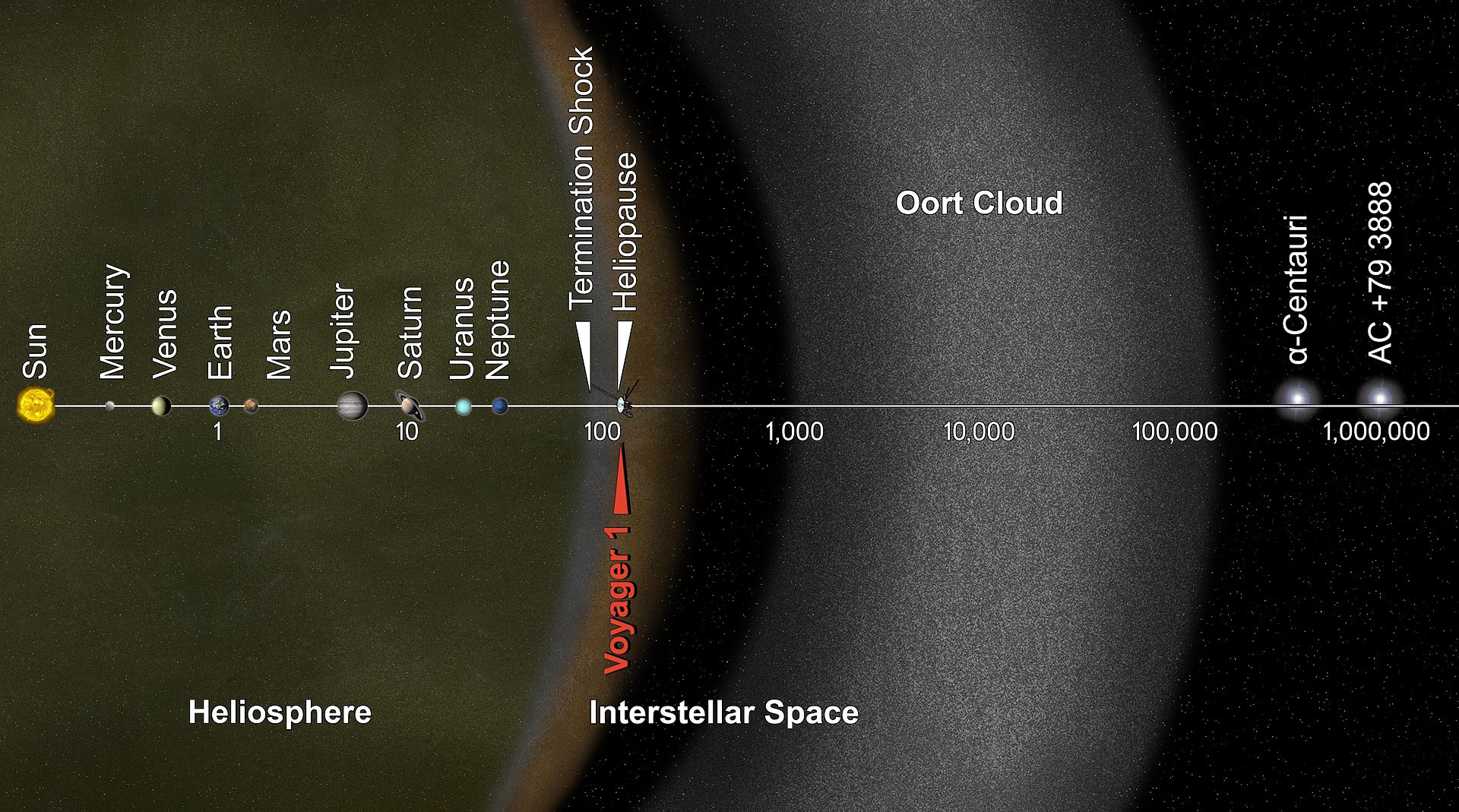 The interstellar space lies beyond the heliopause. “Inter” means “between” while “stellar” means it has something to do with stars. The Oort Cloud is located in this region.

Interstellar space begins outside of the heliopause. It is the space between the stars in a galaxy—and it is anything but empty. About 70% of interstellar space is made up of hydrogen and 28% of it is helium. The remaining 2% encompasses heavier gases and interstellar gas.

The material that make up the interstellar space is very spread out. However, some areas of it have greater density than others. These thicker parts of the interstellar medium are what we call molecular clouds. This is the place where stars form, and because of that, they are also called stellar nurseries.

It is believed that every other star has its own heliospheres or protective bubbles as well. These bubbles do not form solid boundaries and are not entirely impermeable. With that said, star particles can escape through the edges of these heliospheres adding up to the stuff in the interstellar medium.

Where Is the Oort Cloud in Comparison to the Heliopause? 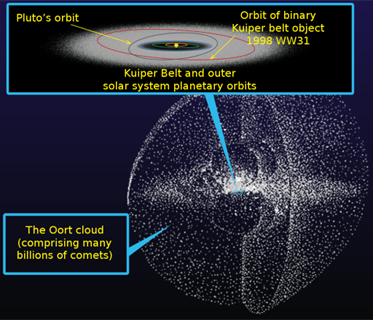 The Oort Cloud is a theoretical cloud that is thought to be composed of icy planetesimals. It is believed to be the origin of long-period comets. One of the most interesting subjects in astrophysics, this cloud is considered to be the cosmographic boundary of our solar system.

The Oort Cloud is composed of two areas. The inner part is believed to have a disk-like shape while the outer region is a spherical cloud.

Because of the great distance, the outer Oort Cloud is already loosely bound to the solar system. It is already affected by the gravity of passing stars and the Milky Way galaxy. Since it is often stretched and disturbed by outside forces, the icy objects in the cloud can be dislodged from their orbits.

The Voyagers have already gone past the heliopause but no man-made spacecraft have reached and crossed the Oort Cloud yet. Even if Voyager 1 is leading the group in traversing away from the Sun, will take another 300 years for it to enter the inner Oort Cloud. It will exit this cloud 30,000 years after.