Arcturus is one of the 58 bright stars that have been given a special status in the field of celestial navigation. It is the only navigational star in the constellation Boötes. 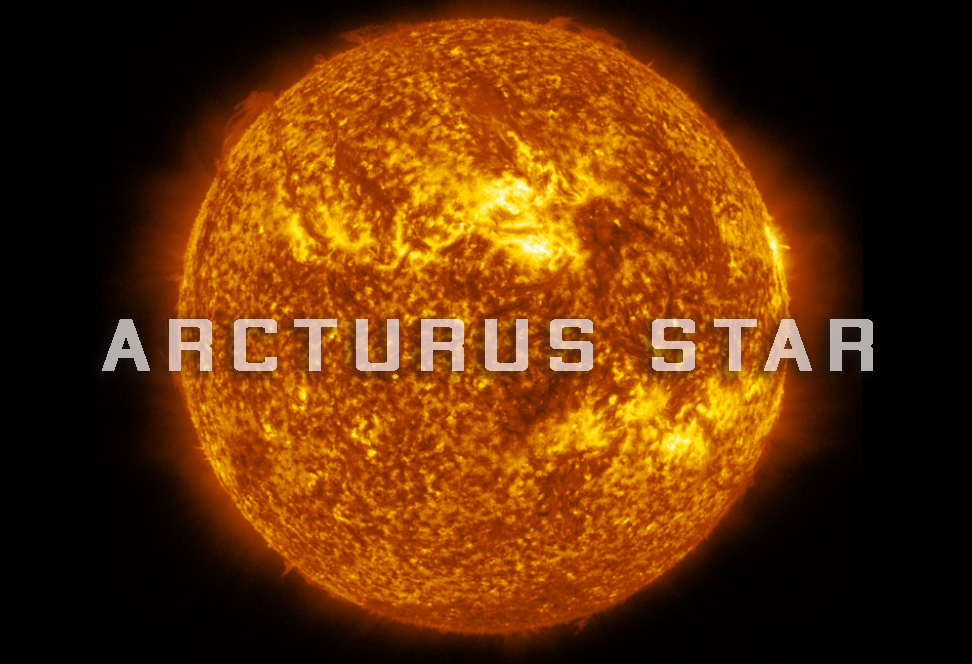 The name Arcturus comes from the Greek Ἀρκτοῦρος (Arktouros), meaning “keeper of the bear” or “guardian of the bear”. The name has been used since at least the 8th century BCE. Here it was referenced in the works of the Greek poet Hesiod, and was officially approved by the International Astronomical Union’s (IAU) on June 30, 2016. 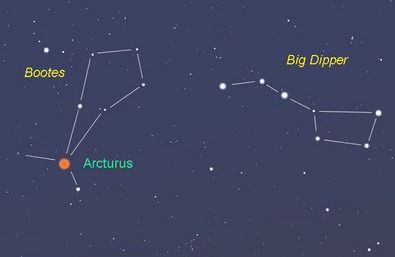 Arcturus is located in the constellation of Boötes, around 36.7 light years away from Earth. It is one of the easiest stars to find because not only is it exceptionally bright and part of two prominent spring asterisms, but it has the three stars of the Big Dipper’s handle – Alioth, Mizar and Alkaid – pointing at it.

Following the arc of the handle of the Big Dipper away from the bowl leads first to Arcturus and then to Spica, the brightest star in Virgo. These two stars are also both part of the Spring Triangle and the Great Diamond of Virgo, two asterisms that are prominent in the sky during the northern hemisphere spring. Arcturus is also part of the Great Diamond (or the Diamond of Virgo) asterism.

Arcturus lies 19 degrees north of the celestial equator, which means that it can be seen from almost every place on Earth. It culminates at 9 pm on June 10 and at midnight on April 27, but it can be seen high in the sky throughout the northern hemisphere spring. In southern latitudes, it marks the beginning of autumn.

The star was not visible from Earth until about half a million years ago. It has been moving in our direction and has now almost reached its closest point to the solar system, moving at 122 km/s relative to the Sun.

Arcturus is a member of the Arcturus stream (Arcturus moving group), a group of stars that share similar proper motion and are believed to be physically associated. They are usually old stars with significantly lower levels of heavy elements, located in the Milky Way’s thick disk.

Arcturus’ nearest neighbour is Muphrid, Eta Boötis, which is a binary star located at almost the same distance from the Sun (37.2 light years), that appears close to Arcturus in the sky. The two stars are separated by only 3.3 light years.

Arcturus is occasionally visible to the naked eye just before the sun sets. 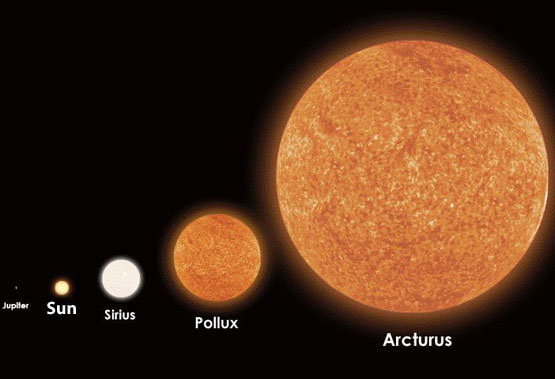 Arcturus is an orange giant star of the spectral type K0 III and is the brightest class K giant in the sky, with an absolute magnitude of about -0.30. It has around the same mass as the Sun, only 1.08 times the mass, yet is 25.4 times its size. It is more evolved, having exhausted the supply of hydrogen in its core, moved off the main sequence, and expanded into a giant.

Arcturus is not massive enough to explode as a supernova. Instead, it will end its life by casting out its outer shell to form a planetary nebula. When it does, it will leave behind a compact white dwarf.

Arcturus is around 7.1 billion years old, making it older than the Sun. Its luminosity is 170 times that of the Sun and it has an estimated surface temperature of 4,286 K.

In 1993, Arcturus, Pollux and Aldebaran were the subjects of a study that measured the radial velocities of the three orange giants. Long-period variations in the relative radial velocities of all three stars were found. This indicated the presence of a substellar companion. This companion has yet to be confirmed for Arcturus.

Arcturus was the first star other than the Sun and supernovae to be observed during the daytime with a telescope. The French astronomer, mathematician and astrologer Jean-Baptiste Morin was the first person to do it in 1635.

The Greek astronomer Ptolemy described Arcturus as “slightly red”, and, as the brightest orange giant in the sky, Arcturus is used to check and refine current spectral classification systems. The star’s spectrum serves as an important standard in stellar spectroscopy.

The exact age of Arcturus is unknown. The colour index indicates that it has entered the red giant branch and the hydrogen shell burning stage after exhausting the supply of hydrogen in its core. As it keeps ascending the red giant branch, some of the helium left in its core will be compacted into degenerate matter, which will increase the core’s density and temperature. However, other studies say otherwise.

It has only a third of the Sun’s metallicity, but it has a higher ratio of alpha elements (oxygen, silicon, neon, etc.) relative to iron. Arcturus is suspected to be a Population II star, formed from the gas that emerged right after the big bang.

In approximately 4,000 years, Arcturus will make its closest approach to Earth, coming a few hundredths of a light-year closer than it is now. It will then start to move away in a southerly direction and, in another half million years, it will not be visible to the naked eye at all. 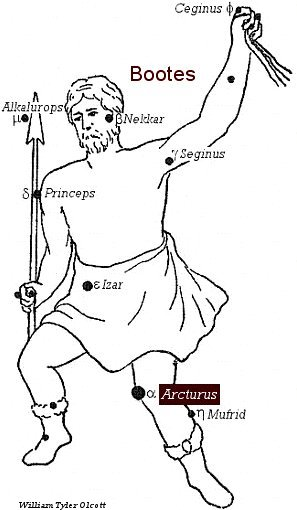 Arcturus has been associated with two Greek myths. The first links Boötes and Ursa Major, representing Arcas and Callisto. Arcas is the son of Zeus and Callisto and the daughter of the Arcadian king Lycaon.

Zeus’ wife Hera, having heard of her husband’s infidelity, transformed Callisto into a bear. Callisto roamed the woods until years later she met her son, who was now grown up. Arcas was scared of the great bear in front of him and drew his spear. But Zeus quickly intervened to prevent a tragedy. He sent a whirlwind that scooped Callisto and Arcas into the heavens. Here Callisto became Ursa Major, and Arcas became Boötes.

The Story Of Icarius

In another myth, Arcturus is associated with the story of Icarius. Icarius was a man from Athens who was given the gift of wine by the god Dionysus as a reward for his hospitality. Icarius gave wine to some shepherds he met, who became intoxicated. They thought that Icarius had poisoned them and so they killed him. Icarius’ daughter Erigone and her dog Maera found his body and became overwhelmed with grief, and killed themselves.

Dionysus was so angry that he decided to punish the city of Athens with a plague. The plague only ended when Athenians introduced rites to honour Icarius and Erigone. Dionysus turned Icarius, Erigone and Maera into the constellations Boötes (Icarius), Virgo (Erigone) and the star Procyon (Maera).

Arcturus has also been associated with the lore of many different cultures. In medieval astrology, Arcturus was one of the Behenian fixed stars, believed to be a source of special astrological power. It was associated with jasper and plantain, which would be used in rituals to bring out the star’s influence.

The star was also associated with the Mesopotamian god Enlil, who ruled wind, air, storms and earth. In Ancient Rome, the star was believed to signal tempestuous weather.