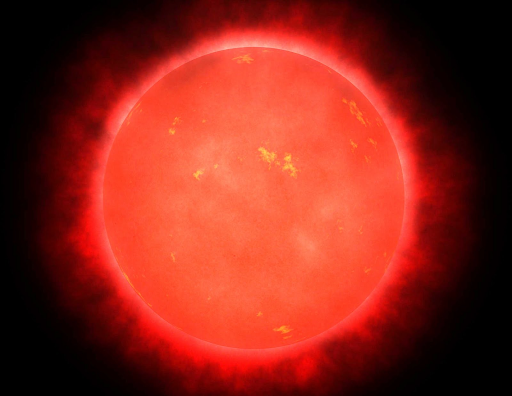 What is a Red Dwarf Star?

The Red Dwarf star type populates our universe the most. Figures have shown that 20 of 30 stars near our planet are red dwarfs. These stars generate energy through the fusion of hydrogen into helium. These low-mass stars are cooler than our Sun. They are quite difficult to see with the naked eye because of the mentioned characteristics.

Despite their abundance, we cannot see a single one with the naked eye. The brightest red dwarf star is Lacaille 8760 (also AX Microscopii). It has an apparent magnitude of +6.7, just below the naked eye visibility limit at about 6.5.

Red dwarfs are the most common type of stars in our galaxy. In fact, they populate about 73% of the Milky Way. Their number is even higher in elliptical types of galaxies.

Although they are similarly small, red dwarf stars are different from brown dwarfs. Brown dwarfs are called “failed stars.” They were given that nickname because these stellar objects never reach the critical point of fusing hydrogen into helium.

Characteristics of a Red Dwarf

Spectral class: K or M type
Mass: Less than 0.8 the mass of the Sun
Temperature: Around 2500 to 4000 K
Luminosity: Around 0.0001 to 0.8 solar luminosities
Lifespan: Billions to trillions of years

Red dwarf stars have about 7% to 50% of the mass of the Sun. They are typically in the K or M spectral type. They measure a few tenths of the Sun’s diameter. These stars have less than 10% of the solar luminosity.

Because of their size, they are also lower in surface temperature compared to our Sun. While our Sun is at 5,778 K, the temperature of a red dwarf star’s photosphere is around 2500 to 4000 K. Its reddish hue is an indication of this low temperature. 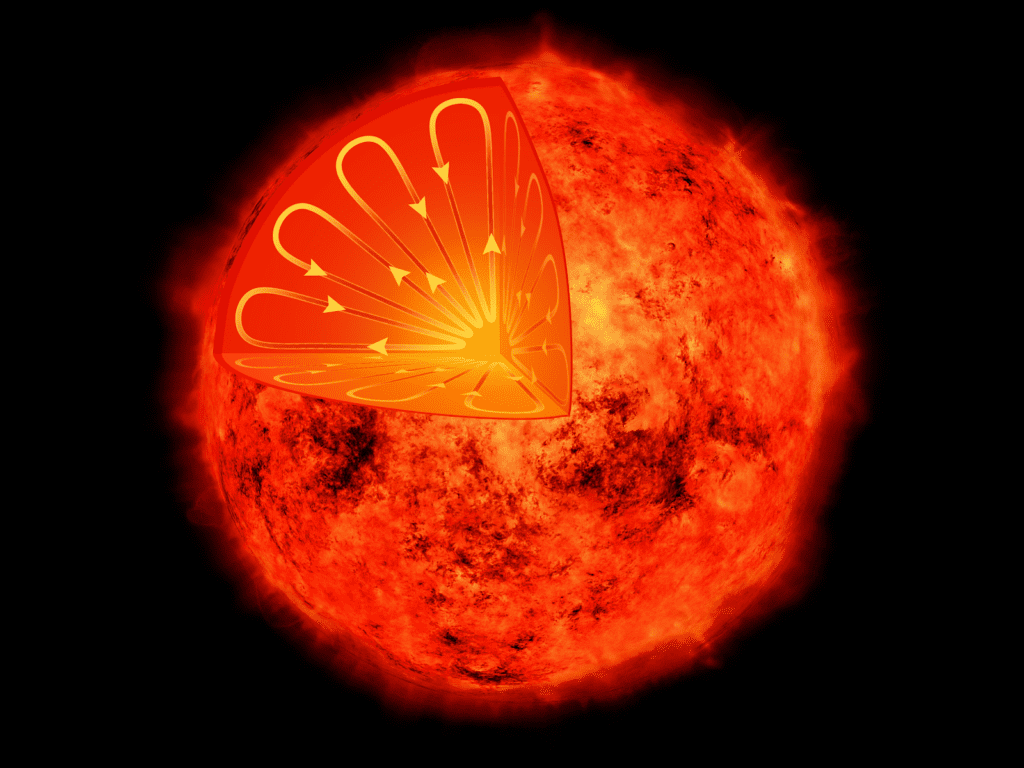 Red dwarfs will outlive other stars in the universe. Their life can last for billions to trillions of years. This is possible because of convection. Through this process, the helium in its core that was generated by fusion is carried to its outer layers. It cools on the surface and sinks only to be heated again. The process goes on. That is how it achieves a state of balance or equilibrium.

It is also because of convection that red dwarfs will not become red giants. There is no chance for expansion. They are fully convective and will completely burn their fuel. They will only become smaller and hotter in time. Stars that are not as convective only burn about 10% of their core’s hydrogen. It will then cause the star to expand when its hydrogen is exhausted. 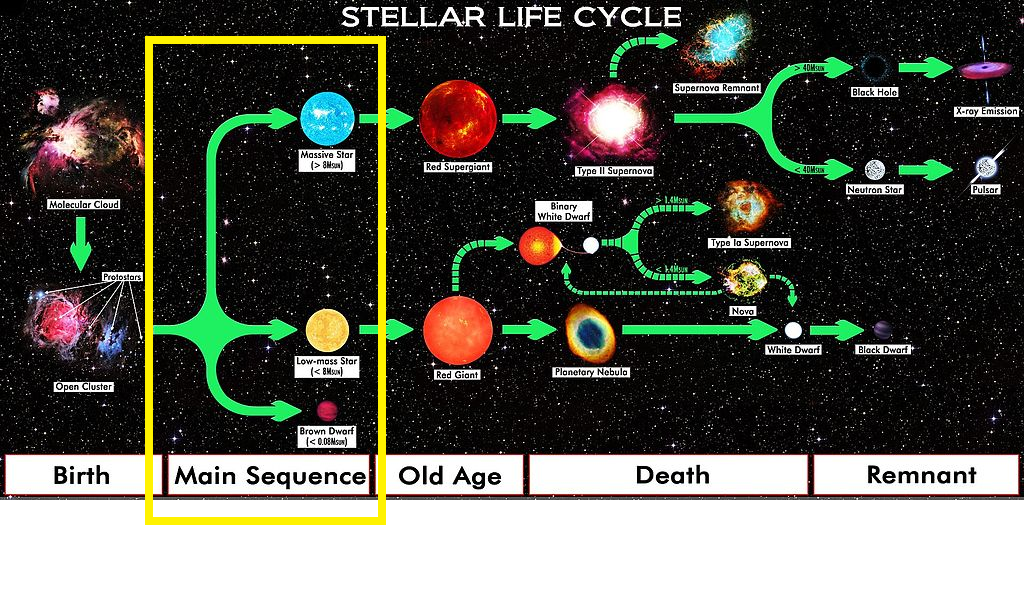 Life Cycle of a Red Dwarf

Red dwarf stars are born in the same way as the other stars. They all started in a nebula or a molecular cloud. That big cloud is made up of gas and dust. Because of gravity, these particles are pulled together. The gas then collapses and forms a baby star called a protostar. A protostar is not yet a star because it does not burn hydrogen yet. The fusion of hydrogen in red dwarfs starts when it reaches a critical temperature.

When they reach it, red dwarfs generate energy through nuclear fusion in their core. Hydrogen is converted into helium through this process. This process will take a very long time. What do you think will happen when a red dwarf finally runs out of hydrogen to burn?

A red dwarf will sink and become a blue dwarf when it has used up much of its hydrogen. No blue dwarf has formed yet in the universe so this is a predicted star class. A star’s surface temperature will increase in this stage. And as a result, it will become more luminous. This increase in temperature is reflected in its bluer color, as this class is named after.

When it is near the end of its burning capacity, a blue dwarf will become a white dwarf. It will eventually grow cooler over time. The star will expel its outer envelope in this stage. This expulsion will result in the creation of a planetary nebula.

The cooling process of a white dwarf is a slow one, taking about trillions of years. After that, it will reach its final form, becoming a black dwarf. This theoretical remnant star has already cooled down. It does not give off light and heat anymore.

A black dwarf is called a “theoretical remnant” because no red dwarf has reached the late stages of its life yet. Estimates show that the coolest white dwarf stars in the universe have lost only 0.2% (or less) of their heat. That is still a long way to go!

Some red dwarf stars were discovered to be orbited by exoplanets in the habitable zone. That means there is a possibility for liquid water on the surface. NASA’s Transiting Exoplanet Survey Satellite (TESS) and the Kepler space telescope both agree on this.

Roughly 4 billion of the red dwarf stars in our galaxy possibly host Earth-like planets. That number only includes planets that are comparable to ours. From super-Earth to Jovian, to gas giant to terrestrial, the possibility is endless.

All in all, there are about 60 billion habitable exoplanets around red dwarf stars that can potentially be our next home.

It is a good thing if red dwarfs can potentially sustain life because they will do so for a long time. Let us take a look at the factors and possibilities.

One distinct characteristic of a red dwarf is that it is a cool star. This will not be very helpful if it is to support life. Its heat will not be able to reach the exoplanet if it lies very far. In short, a planet should be closer to support life. Think about the distance of Mercury to our Sun, or closer.

That will pose some problems though. If a planet will be so close to its star, there is a big possibility for it to be tidally locked. What does that mean?

To be tidally locked means only one side of the planet faces the star. It will be the only part to receive light and heat. The other side will be so cold and will be in darkness forever. This scenario will make it difficult for life to thrive.

The problem of heat distribution on a planet can be solved if it has a big ocean. This ocean can help in distributing the heat coming from its red dwarf star through water flow.

However, this will not last that long. The planet is most probably affected by gravitational forces because it lies so close to the star. This will squeeze the planet up and make it so hot that all its water will ultimately dry up. 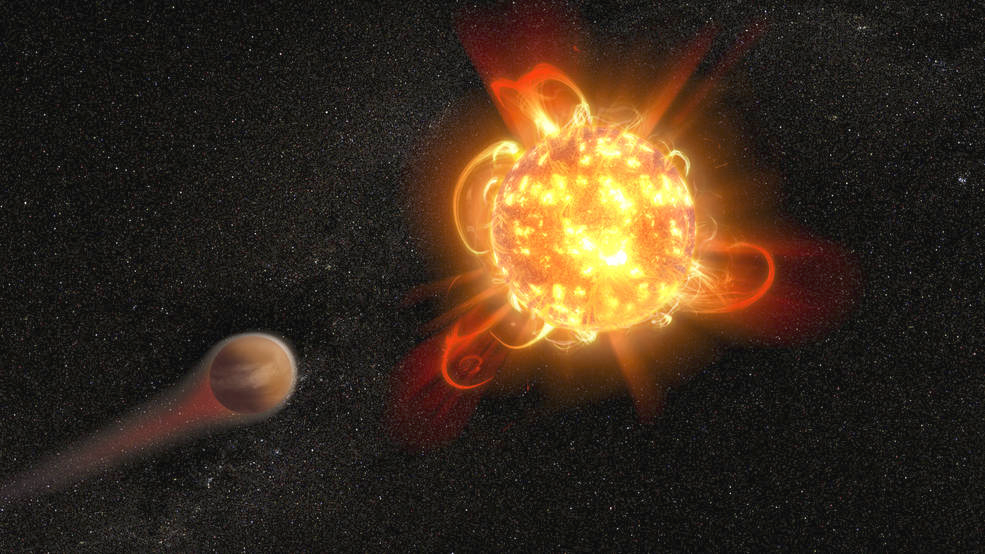 There are a lot of factors that can affect the energy output of dwarf stars. A lot can happen to them like starspots and powerful flares. These phenomena will have a tremendous effect on potentially habitable planets.

Starspots can affect the light emitted by a red dwarf. It decreases by about 40% and thus, makes the planet colder. What is worse is that this could last up to months. Oceans will freeze in during these periods.

Another event that affects the possibilities of life around a red dwarf is stellar flare. It happens because of strong and accelerated magnetic fields. These powerful magnetic fields around low mass red dwarfs puzzle even experts in Astrophysics.

During a flare, the star’s brightness suddenly increases in just some minutes. An outburst as big as this could easily burn the planet’s atmosphere considering its distance from the star.

The HAZMAT program (Habitable Zones and M dwarf Activity across Time) of NASA and ESA (European Space Agency) was made to study more about the impact of these flares on the atmosphere of exoplanets.

A red dwarf star spins rapidly. It generates ultraviolet emission as well as strong stellar wind as a result. Planets in the habitable zone of this host star should be close to support life. With that being said, it receives more radiation that will most likely destroy its atmosphere.

A planet’s proximity to its red dwarf star has great effects on its atmosphere and weather. It will be subjected to strong stellar wind from its star. The magnetic shield of the planet can protect it from such harsh space weather but it can only do so much. This constant outflow of material will strip its atmosphere over time.

Being tidally locked has its consequences on the weather. The contrast in the temperature of the dayside-nightside parts will result in strong winds across the planet.

Proxima Centauri is the closest star to our solar system. It is reflected in its name which means “nearest (star) of Centaurus” in Latin. It lies only 4.2465 light-years from our Sun. Proxima Centauri should be easily seen because of its distance, but we need a telescope to observe it. Its apparent magnitude is only about 11.

Proxima Centauri is a flare star that measures 14% of the Sun’s diameter. It is in the stellar class M5.5. Its mass is only about 12.5% of the solar mass. Given that mass, it will remain a main-sequence star for at least four trillion years.

Barnard’s Star is roughly six light-years from our planet, making it the second-closest red dwarf to us. It is in the constellation of Ophiuchus (the Serpent Bearer). The name of this star was from the American astronomer E. E. Barnard.

The apparent magnitude of Barnard’s Star is +9.5, which means we cannot see it with the naked eye. Its spectral type is M4. It is 0.14 times as massive as the Sun. This mass is 150 times greater than the mass of Jupiter.

Barnard’s Star is much older than the Sun. While our yellow star is about 4.5 billion years of age, this red dwarf is roughly 7–12 billion years old already. Stellar activities were observed in this star. Its variable star designation is V2500 Ophiuchi.

Wolf 359 is an M star with an apparent magnitude of 13.54. It is one of the nearest stars to us, approximately 7.9 light-years from our planet.

The stellar classification of Wolf 359 is M6.5. It is a low-mass red dwarf that has only 9% of the solar mass. It radiates only 0.1% of the solar luminosity.

This star is expected to remain on the main-sequence for approximately eight trillion years. This is due to its efficient convection and low hydrogen consumption. The Hubble Space Telescope found no companion around Wolf 359, though two candidate exoplanets are already being studied.

Lacaille 8760 is also called AX Microscopii. Its apparent magnitude is +6.7. It is the brightest M dwarf in our night sky. It is a close neighbor, located about 12.9 light-years away.

Lacaille 8760 is a flare star. Its mass equates to 60% of the solar mass. This star has an estimated life of 75 billion years. That is about seven times longer than our Sun’s life. This red dwarf was listed by Nicolas Louis de Lacaille, from whom it was named.

Gliese 876 is actually the first red dwarf star known to have planets. The discovery was made in June 1998 when Gliese 876 was confirmed.

Trappist-1 is another red dwarf star in the Aquarius constellation. This M-type star has 11% of the Sun’s radius. It is also less massive, having only 8% of the solar mass. What makes this star an interesting subject is that seven terrestrial planets were discovered around it. This system is located about 40 light-years distant.

The exoplanets are designated Trappist-1b, c, d,e, f, g, and h. Five of them are Earth-like in terms of size. The other two, Trappist-1d and h, have sizes between our planet and Mars. Although at least three of them are in the habitable zone, the exoplanets are most probably affected by tidal locking and tidal heating. On top of that, starspots and flares were observed in this star.