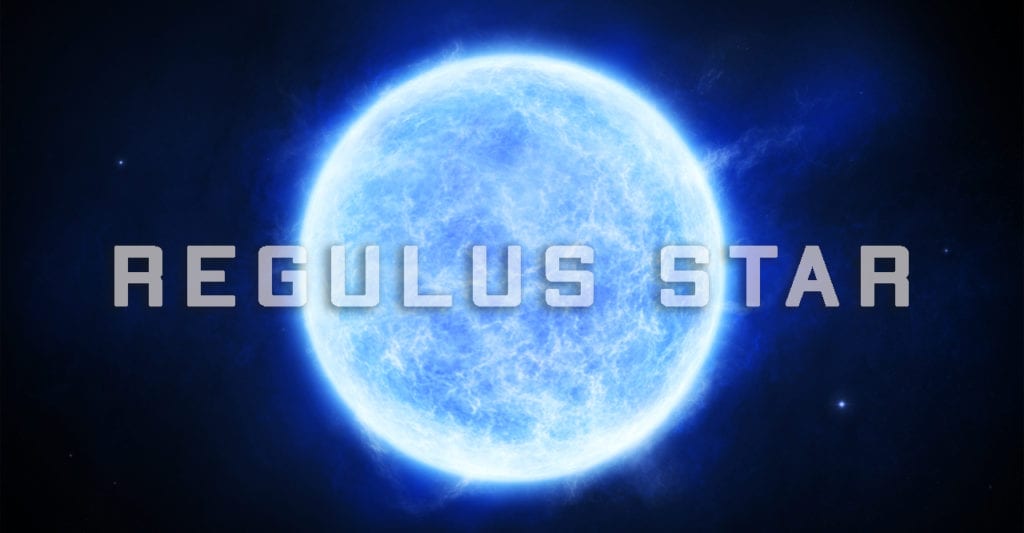 Regulus lies around 79.3 light years, or 24.3 parsecs, from Earth in the constellation of Leo. It can be seen in the night sky throughout the year except for a month on either side of August 22, when the Sun comes too close to the star. The best time of year to observe Regulus from the northern sky is in the late winter and early spring. 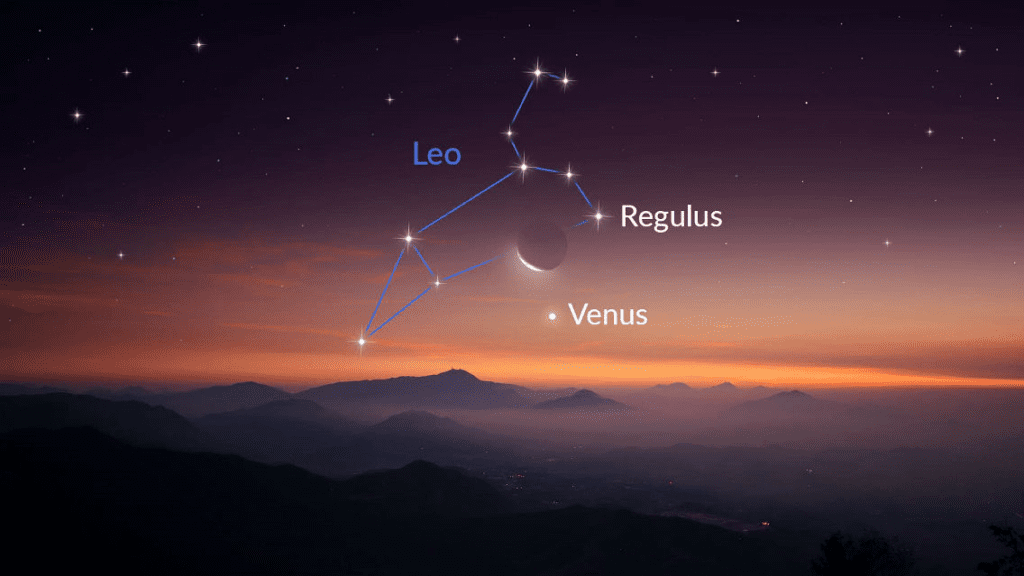 The star’s heliacal rising, which is its first appearance above the horizon after a period of invisibility, occurs in the first week of September for observers in most locations. The planet Venus passes the star around this time every eight years.

Regulus is fairly easy to find in the sky as it is part of the Sickle of Leo, a prominent asterism in the constellation Leo, and marks the lower end of the Sickle’s handle. The asterism looks like a backwards question mark and outlines the head of the celestial lion.

It can be located using the stars of the Big Dipper; Megrez and Phecda, the two inner stars of the Dipper’s bowl, point the way to the asterism.

Regulus lies only 0.46 degrees from the ecliptic, which is the Sun’s apparent path across the sky, through the zodiac constellations, and is regularly occulted by the Moon and very rarely by Mercury and Venus. Venus last occulted Regulus on July 7, 1959. It will do so again on October 1, 2044. 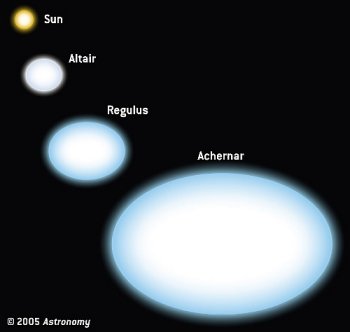 Regulus is not really a single star, but a multiple star system. It consists of two pairs of stars.

The brighter pair, designated Regulus A, is a spectroscopic binary system consisting of a bright blue star of spectral classification B7 V, and a companion that has not been directly observed, but is likely a white dwarf with a low mass of only 0.3 solar. The two are separated by 0.35 astronomical units and complete an orbit around a common centre of mass every 40.11 days.

Regulus A is only a few million years old. It has a mass of 3.8 solar masses and is an extremely fast spinner, with a rotational velocity of 347 km/s. This means that it completes a rotation every 15.9 hours and, as a result, its shape has been distorted into an oblate spheroid, with the equatorial diameter 32 percent larger than the polar diameter.

If the star were spinning 10 percent faster, it would fly apart as its gravity would not be strong enough to hold it together.

With a visual magnitude of 1.35, Regulus A is responsible for the star system’s brightness and bluish colour. It is the object within the Regulus system that can be seen with the naked eye. Its brightness is 288 times that of the Sun.

Regulus B and C are the other pair of stars in the system. They are main sequence stars belonging to the spectral classes K1-2 V and M5 V, making Regulus B an orange dwarf and Regulus C a red dwarf. They are located 100 astronomical units away from each other and have an orbital period of 2,000 years. The pair lie about 177 arc seconds or 4,200 astronomical units away from Regulus A.

As an 8th magnitude star, Regulus B can be seen with binoculars. However, Regulus C would require a larger telescope to be seen isolated from the system. Together, the Regulus BC pair can be seen in small telescopes.

The star Regulus is known by many different names in different cultures. The name Regulus is a diminutive form of “rex”, which is Latin for “king”.

Polish astronomer and mathematician Nicolaus Copernicus gave the star its name, which was equivalent to Basiliskos (“little king”), used by the Greek astronomer Ptolemy. The star is also known by its Latin name Cor Leonis and the Arabic Qalb al-Asad (Kalb al Asad, Kabeleced). Both phrases mean Lion’s Heart.

Astronomers from Babylon knew the star as Sharru (“the King”) and in Persia, Regulus was one of the four Royal Stars, along with Aldebaran in Taurus, Antares in Scorpius and Fomalhaut in Piscis Austrinus.

In the MUL.APIN, a catalogue of stars and constellations in Babylon, Regulus was listed as LUGAL. This refers to “the star that stands in the breast of the Lion: the King”. Regulus was also one of the 15 Behenian fixed stars in medieval astrology, which were believed to have influence on one or more planets.