The North Celestial Pole marks truth north, so the North Star is very useful in navigation. It is a bright star, but is actually only the 48th brightest star in the sky. It is, however, the nearest relatively bright (second magnitude) star to the North Celestial Pole, and can be seen with the naked eye. The Polaris star goes by many different names, including the Northern Star, Pole Star, Lodestar, Guiding Star and Cynosūra, derived from the Greek κυνόσουρα meaning “the dog’s tail”. The name Polaris is an ellipsis for Stella Polaris, which is the Latin for “pole star”. In Latin, the star is also known as Stella Maris, or “the sea star”. 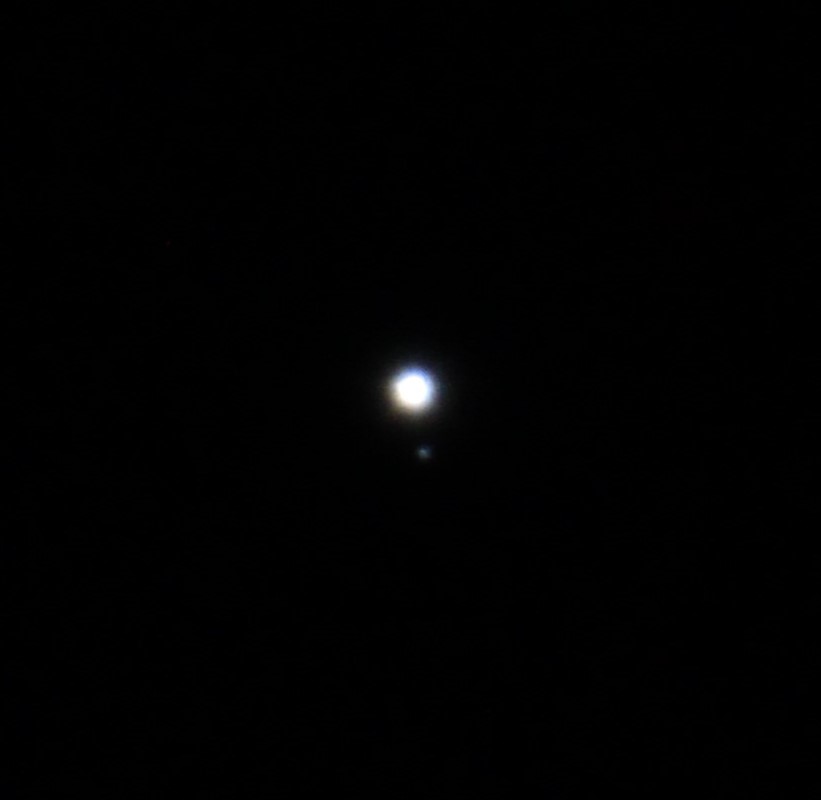 Polaris is located in the Ursa Minor constellation and marks the end of the Little Dipper’s handle or the tip of the tail of the Smaller Bear. It lies at a distance 434 light years or 133 parsecs from Earth. 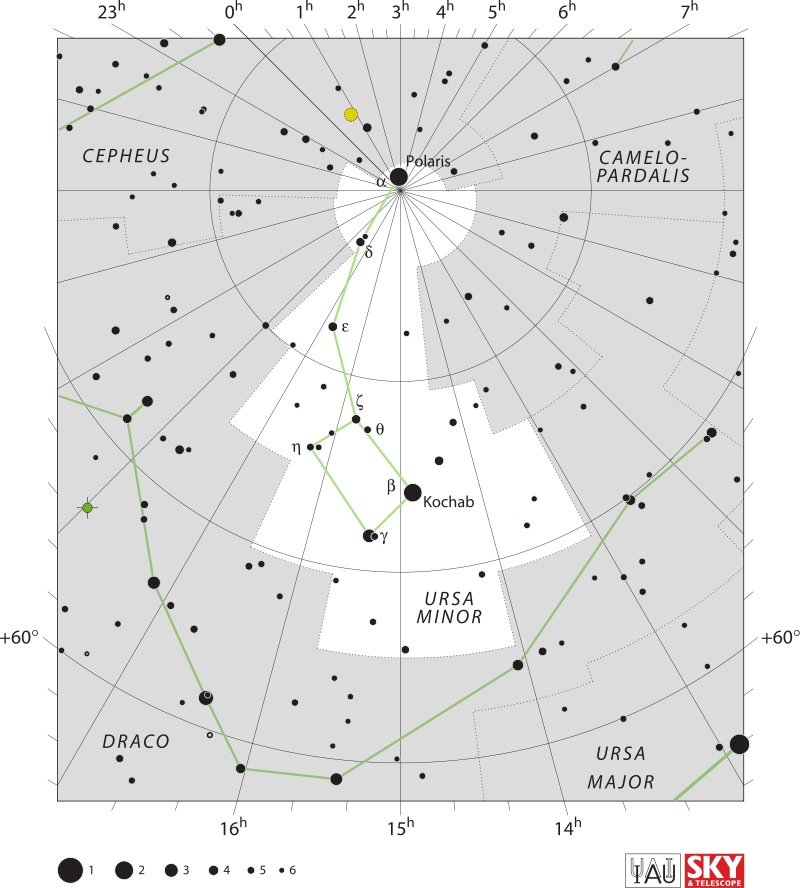 Polaris lies almost in a direct line with the Earth’s rotation axis, almost exactly “above” the North Pole. It is is slightly off the pole, making a circle around it roughly 1.5 degrees across. The star is almost motionless, while all the other stars in the northern sky seem to rotate around it. It never rises or sets at night, but stays in almost the same position above the northern horizon throughout the year, while other stars appear to circle around it.

The Little Dipper is not bright enough to be seen from areas where there is too much light pollution. So the easiest way to locate Polaris is by using the stars of the bigger and brighter Big Dipper in nearby Ursa Major.

The stars Dubhe and Merak in Ursa Major, also known as the Pointers, are the two bright stars that outline the outer part of the bowl of the Big Dipper. An imaginary line through these stars leads directly to the North Star. The Big Dipper completes a circle around Polaris every 23 hours and 56 minutes. The Pointer stars always pointing toward the North Star.

Unlike the North Celestial Pole, the pole in the southern hemisphere doesn’t have a bright star close enough to be called the pole star. It will not have one for the next 2,000 years. The nearest star to the south pole is Sigma Octantis, located in Octans. It has a visual magnitude of 5.45 and can barely be seen without binoculars, which doesn’t make it very useful in navigation!

Polaris is the brightest in a small semicircle of stars known as the “Engagement Ring.” The stars lie within a field which is six degrees wide.

Polaris is in fact a multiple star system. With the primary component being an evolved yellow supergiant star belonging to the spectral class F7, designated Alpha Ursae Minoris Aa or Polaris A. It is 4.5 times more massive than the Sun and has a radius 46 times that of the Sun. It is also 2,500 times more luminous than the Sun. Polaris has an apparent magnitude of 1.98v.

Alpha Ursae Minoris Aa is a variable star, classified as a Population I Cepheid variable, which makes it the brightest Cepheid variable in the sky. Cepheid variables are stars in the night sky that that astronomers use to measure distances to galaxies and clusters. Its brightness varies by 0.03 magnitudes over a period of 3.97 days.

Polaris was used as the pole star by navigators from Late Antiquity, but it wasn’t always the North Star. Around the year 2500 BC, the celestial pole was near Thuban, located in the Draco. Around the year 400 BC, the pole was closer to Kochab, Beta Ursae Minoris, than it was to Alpha UMi.

Polaris was first catalogued by the Greek astronomer Ptolemy. However, Polaris may be 2.5 times brighter today than when the Ptolemy observed the star, according to a recent research led by Scott Engle of Villanova UPenn.

Polaris won’t always be the North Star. Around the year 14,000, the much brighter Vega star in Lyra constellation will be the nearest star to the pole. Polaris will make its closest approach to the pole on March 24, 2100, when it will come within only 27.15 arc minutes of it.

Due to the 26,000 year precession of the Earth’s axis, the celestial pole is currently moving closer to Polaris. Once it reaches the separation of 14 arc minutes around the year 2105, the pole will start to move away from the star again. Eventually, another star will take over as the navigational benchmark for true north. By the 41st century, it will come near Gamma Cephei in Cepheus constellation.