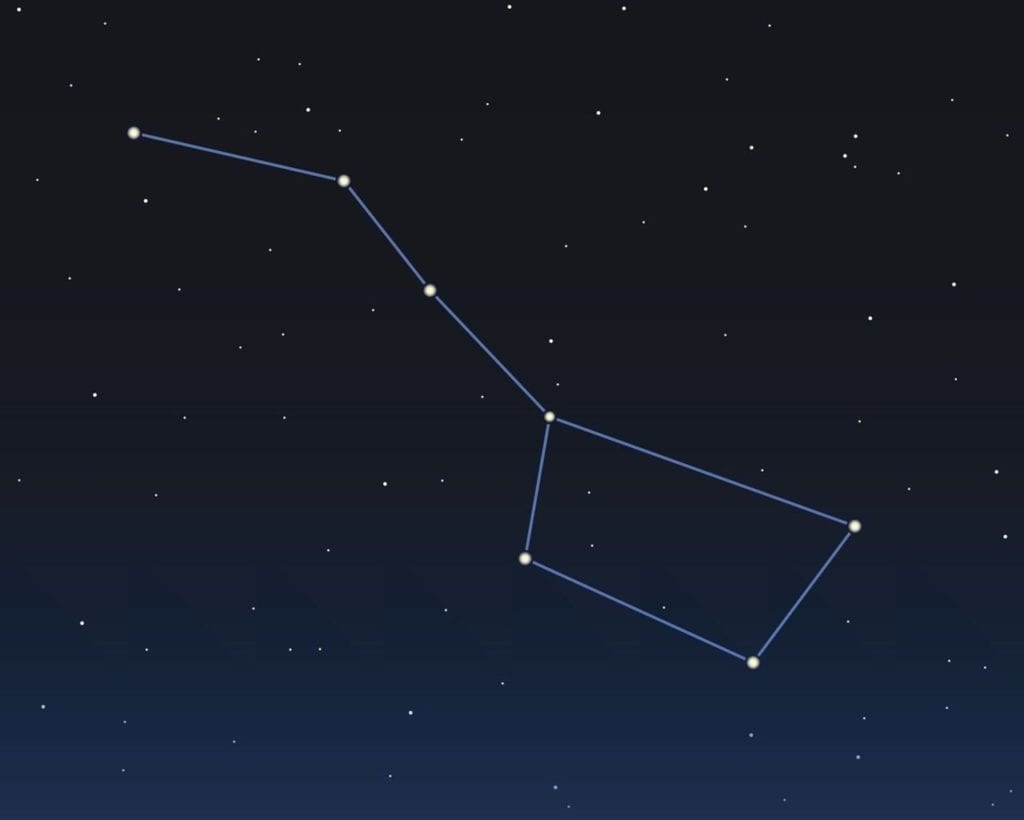 The Big Dipper is most prominent in the northern sky in summer and is one of the first star patterns learned in astronomy. There are many deep sky objects in the the same region of the sky as the Big Dipper, such as the Whirlpool Galaxy, the Pinwheel Galaxy, the double star Winnecke 4, Bode’s Galaxy and the irregular Cigar Galaxy.

History and Mythology of The Big Dipper Asterism

The Big Dipper is associated with many different myths and folk tales in cultures across the world.

In Hindu astronomy, the Big Dipper is known as Sapta Rashi – The Seven Great Sages. In an Arabian story, the stars that form the bowl of the Big Dipper represent a coffin, and the three stars marking the handle are mourners following it. In China, the seven stars are known as the Government, or Tseih Sing, while in Malaysia, the asterism is called Buruj Biduk or The Ladle. In Mongolia, it is known as the Seven Gods.

In Scandinavian mythology, the stars of the Big Dipper were known as Odin’s Wain or Odin’s Wagon. An old English name for the asterism is Charles’ Wain (wagon), which is derived from the Scandinavian Karlavagnen, Karlsvognen, or Karlsvogna.

The Romans knew the seven stars as the “seven plough oxen,” or Septentrio, with only two of the seven stars representing oxen and the others forming a wagon pulled by the oxen. 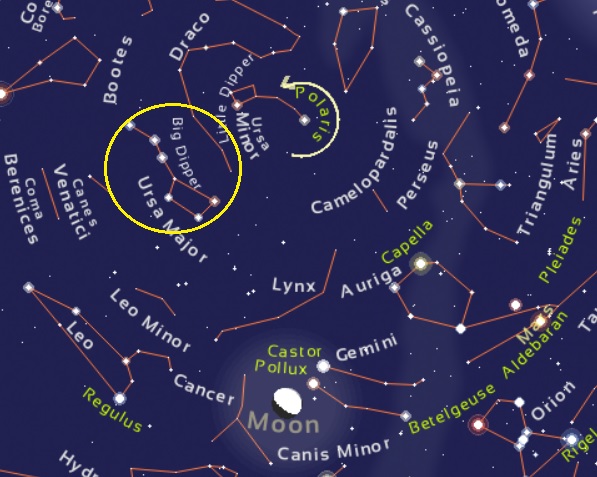 Location of The Big Dipper Asterism

The Big Dipper is located in the constellation Ursa Major, which spreads out for over 1,280 square degrees. Ursa Major lies in the second quadrant of the northern hemisphere (NQ2) and is visible at latitudes between +90° and -30°. Its right ascension is 10.67 hours and its declination is +55.38 degrees. It is best seen at 9pm during the month of April.

The Big Dipper is circumpolar in most of the northern hemisphere, which means that it does not sink below the horizon at night. The appearance of the Big Dipper changes from season to season. In autumn, it rests on the horizon in the evening. In winter evenings, the handle appears to be dangling from the bowl. In spring, it is upside down in the evening hours, and in summer the bowl leans toward the ground. 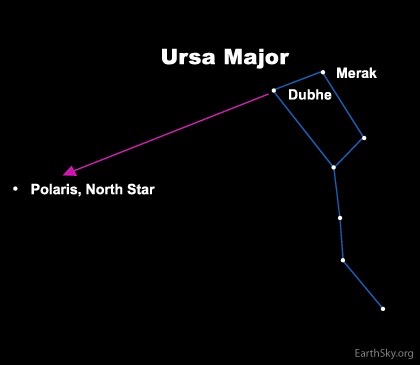 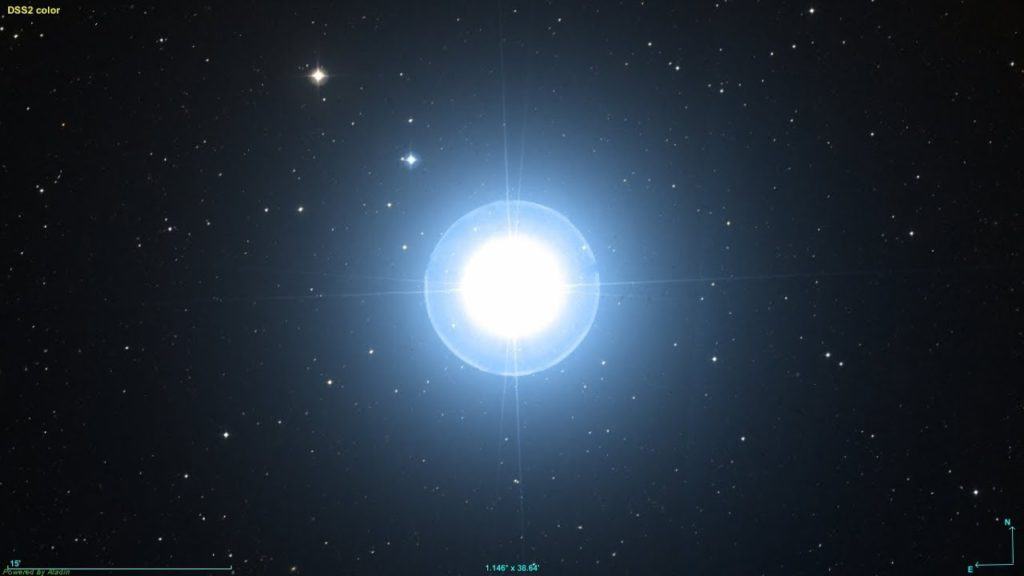 It is a white star that is coming to the end of its main sequence lifetime, with the stellar classification of A1III-IVp kB9. It has a visual magnitude of 1.77 and is about 82.6 light years away from us.

It is classified as a Canum Venaticorum variable star, meaning it varies in brightness due to its magnetic field and its chemical peculiarity. Its magnetic field is 100 times greater than Earth’s. 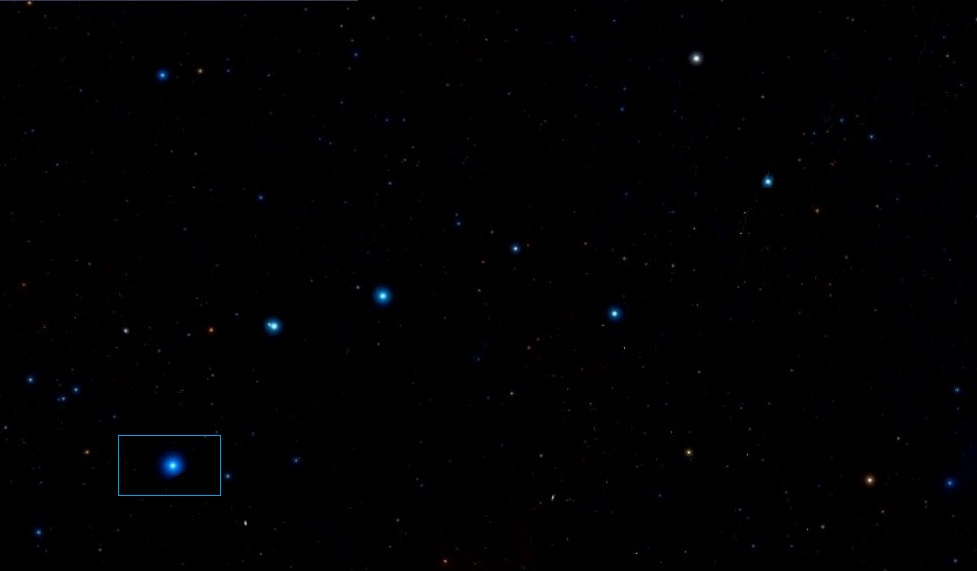 Alkaid, also known as Benetnash or Eta Ursae Majoris, is one of the hottest stars visible to the naked eye and the third brightest star in Ursa Major. It is also the 38th brightest star in the night sky. It is a blue main-sequence star of the spectral type B3V. It has an apparent magnitude of 1.86 and is about 103.9 light years away from Earth.

The name Alkaid comes from the Arabic qā’id bināt na’sh, meaning “the leader of the daughters of the bier”, and it is the star marking the tip of the handle of the Big Dipper, or the tip of the Great Bear’s tail.

It was once one of the 15 Behenian Fixed Stars – a group of stars used in medieval times in magic rituals.

Mizar, also known as Zeta Ursae Majoris, is a quadruple star system that consists of two spectroscopic binary stars. It was the first double star to be photographed, in 1857. Its name comes from the Arabic mīzar, meaning “girdle”. It is the middle star in the Big Dipper’s handle and it forms a naked-eye double with Alcor, a fainter binary star located at a separation of about 12 arcminutes.

Mizar has an apparent magnitude of 2.23 and is 82.9 light years away from us. It is the fourth brightest star in Ursa Major. The primary star is a blue-white hydrogen fusing dwarf, which has around 2.2 times our Sun’s mass and 2.4 times its radius. It is also 33.3 times brighter than our Sun.

Megrez, also known as Delta Ursae Majoris, is the dimmest of the seven stars in the Big Dipper asterism and has an apparent magnitude of 3.312. Its name comes from the Arabic al-maghriz, meaning “the base,” referring to the base of the Big Bear’s tail.

It is thought to be around 300 million years old. It also has a rotational velocity of around 233 km/144.7 mi per second. 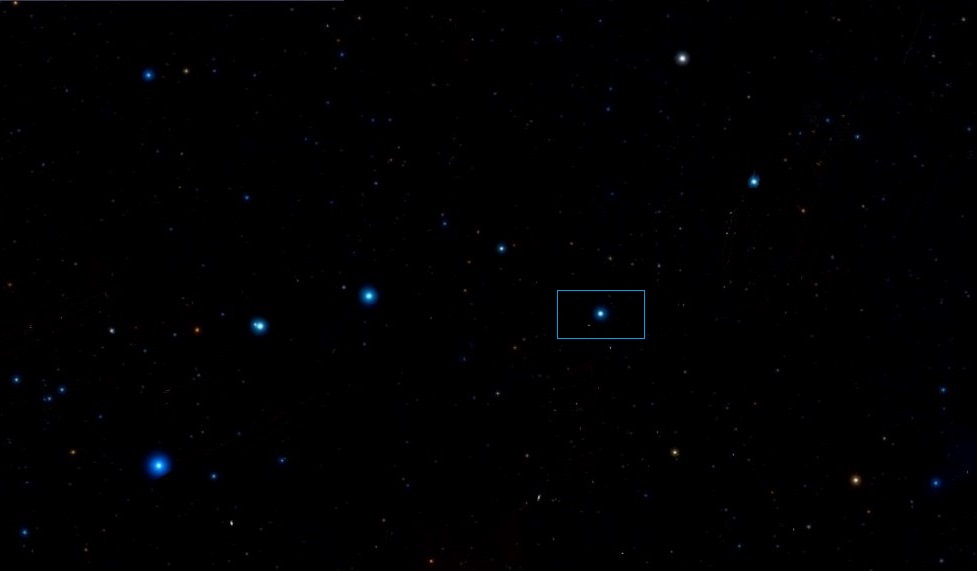 Phecda, also known as Phad or Gamma Ursae Majoris is a white main sequence dwarf of the stellar classification A0Ve. Its name comes from the Arabic fakhð ad-dubb, meaning “the thigh of the bear”.

Phecda is one of the stars forming the Big Dipper’s bowl and the Great Bear’s hindquarters. It is the lower-left or southernmost star of the Big Dipper’s bowl. It has an astrometric binary companion — an orange dwarf of the spectral type K2 V. It perturbs it and causes it to wobble around the centre of mass. The two stars have an orbital period of 20.5 years. 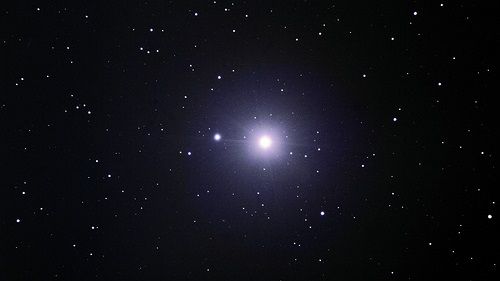 Dubhe, also known as Alpha Ursae Majoris, is the second brightest star in Ursa Major and a spectroscopic binary star system. Its name comes from the Arabic dubb, meaning “bear,” abbreviated from the phrase żahr ad-dubb al-akbar, meaning “the back of the Greater Bear”.

Dubhe has a visual magnitude of 1.79 and is located about 123 light years away from Earth. It is a an orange giant with the stellar classification of K0III, while the companion is a white main sequence of the spectral type F0V.

It is 316 times more luminous than the Sun and is 4.25 times more massive. It is a slow spinner, with a projected rotational velocity of 2.6 km/s. The companion only has around 1.6 solar masses and a visual magnitude of 4.86. 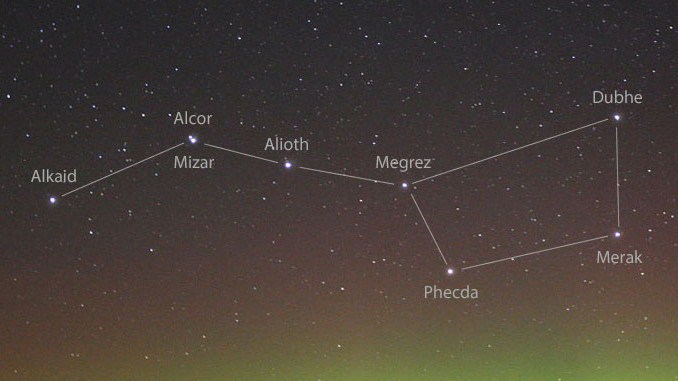 Merak, also known as Beta Ursae Majoris, is the fifth brightest star in Ursa Major. It is a bluish-white subgiant star of the spectral type A1IVps, that has exhausted its hydrogen supplies, and thus it has begun to cool down.

Its name comes from the Arabic al-maraqq, meaning “the loins”, and it has an apparent magnitude of 2.37. It is located around 79.7 light years away from us. Merak is one of the four stars which form the bowl of the Big Dipper.

Guide To Other Stars

The Big Dipper asterism can be used to help find other bright stars in the night sky. The arc of the Big Dipper’s handle leads to Arcturus, which is the brightest star in the constellation of Bootes.

Following an imaginary line beyond the star Dubhe, two of the stars marking the cup of the Big Dipper show the way to Polaris, the current North Star, which then reveals the Little Dipper asterism. The Little Dipper is formed by the seven brightest stars in Ursa Minor constellation and lies near to the Big Dipper, yet its stars are not as bright.

The Big Dipper asterism will continue to be visible in the future. However, the stars will be at different locations in around 50,000 years or so. This will result in the asterism changing its shape and facing the opposite side.

That being said, because most of the stars that form the asterism, except Alkaid and Dubhe, are members of the Ursa Major Moving Group, which means that they share common motion through space, the asterism will not look significantly different.

Some Images created with the NightVision app – https://www.nvastro.com/nvj.html