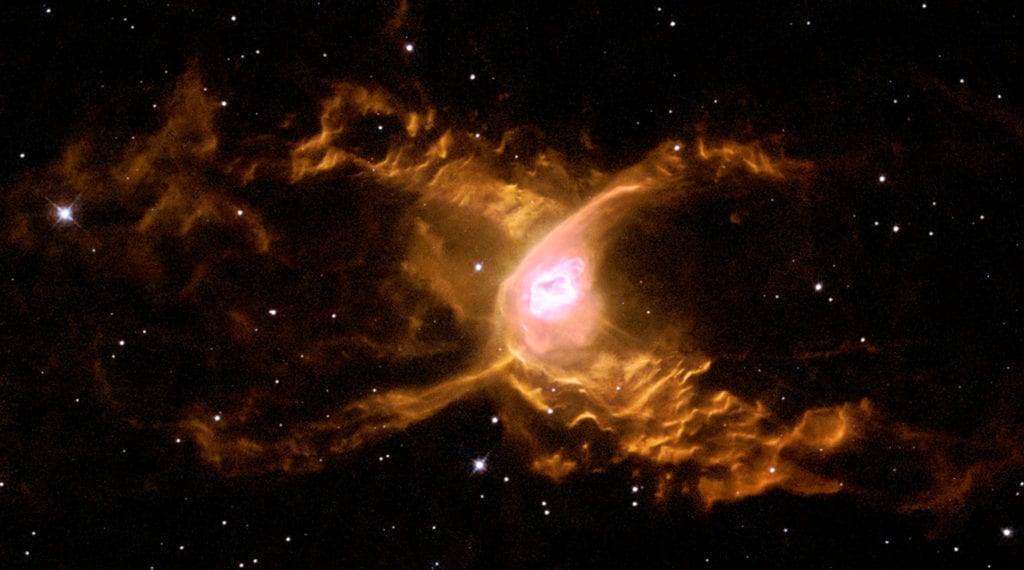 The Red Spider Nebula is a planetary nebula located near the heart of the Milky Way, in the northwest of the constellation of Sagittarius. It has an apparent size of 1.5 arcminutes and is around 5000 light years away from us, although the exact distance is hard to determine and has been said to be between 3,000 and 8,000 light years. It is moving toward us at a speed of 17.3 km/s.

The nebula has been given many designations. Its designation in the New General Catalogue is NGC 6537.

The nebula has a prominent two-lobed shape, possibly due to a binary companion or magnetic fields and has an ‘S’-shaped symmetry of the lobes – the lobes opposite each other appear similar. This is believed to be due to the presence of a companion to the nebula’s central white dwarf, but this has not been confirmed. However, the gas walls of the two lobed structures are not at all smooth, but are rippled in a complex way.

The central white dwarf, which is the dense, compact remnant of the star that ejected its outer layers to form the expanding, glowing nebula, generates an extremely powerful, hot wind, with an estimated temperature of about 10,000 K. It blows with a speed of 300 km/s and has generated waves 100 billion kilometres high. The waves are generated by supersonic shocks formed when the local gas is compressed and heated in front of the rapidly expanding lobes.

The central star is thought to have a surface temperature in the range of 150,000 to 250,000 K, but it is difficult to know because is surrounded by a thick shell of dust.

The Red Spider Nebula has an apparent magnitude of 13 and is very hard to see because the interstellar and circumstellar dust makes it about 40 times dimmer than it would be if it were located in an area with no dust.

The two-lobed nebula can be found 2.4 degrees northwest of the star Mu Sagittarii, also known as Polis, which is located just above the celestial Teapot. The nebula is situated in the same area of the sky as the much larger, brighter and better known Eagle Nebula, Omega Nebula, Trifid Nebula and Lagoon Nebula.