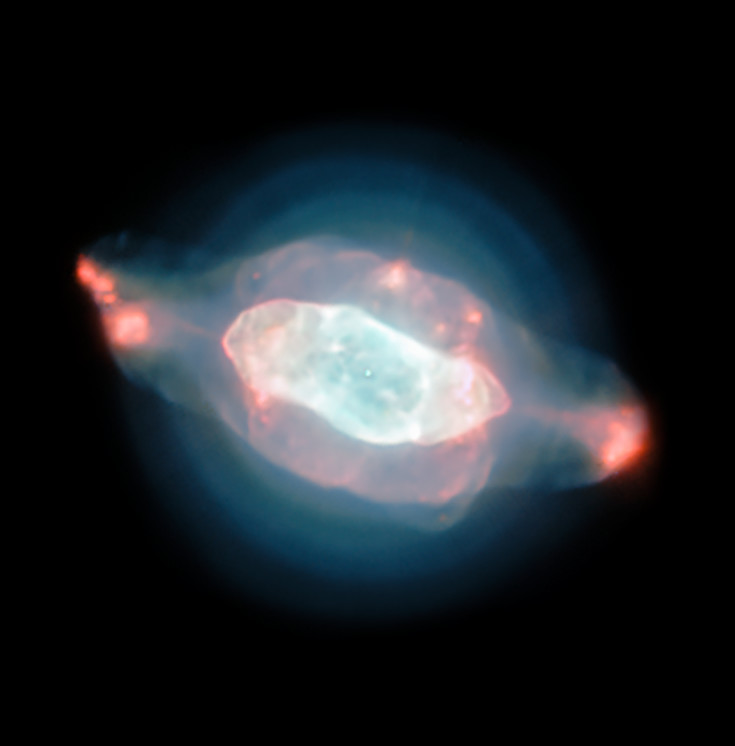 The Saturn Nebula is a planetary nebula located in the constellation Aquarius, around 1 degree west of the star Nu Aquarii. It has an apparent magnitude of 8.0 and is located between 2000 to 4000 light years away from the Solar System, although the exact distance is not actually known.

The Saturn Nebula is a complex planetary nebula and contains many morphological and kinematic sub-systems in three dimensions. It includes a halo, jet-like streams, multiple shells, ansae (“handles”) and small-scale filaments and knots.

The ansae are expanding non-radially from the central star, which is a bright white dwarf star of apparent magnitude 11.5. The ansae can also be seen in other planetary nebulae, including NGC 3242, NGC 6543 and NGC 2371-2.

The original central star, from which the nebula is believed to originate, has a temperature of 55,000 K and an absolute magnitude of +1.5. Its visual magnitude is 11.5 and its luminosity is 20 times that of the Sun. Strong ultraviolet irradiation from the central star creates the fluorescent green tint the nebula has, via the radiation of doubly ionized oxygen. The nebula is moving toward us at a radial velocity of 28 miles per second.

The Saturn Nebula has a radius of between 0.2 to 0.4 light years. The central portion measures 25″ × 17″, while the outer shell extends to 41″ × 35″. It can be seen in small amateur telescopes and appears as a hazy greenish or yellowish patch. The object is on many “best of” observing lists.

Recently, the Saturn Nebula was studied by the Multi Unit Spectroscopic Explorer (MUSE) instrument, which is installed at the Very Large Telescope (VLT) of the European Southern Observatory’s (ESO) Paranal Observatory in Chile. ESO researchers were able to accurately map the nebula in order to better understand its structure.

The ESO researchers discovered a wave-like feature in the dust, which is typically evenly distributed throughout the nebula. However, the rim of the Saturn Nebula’s inner shell has a distinct lack of dust, which has led astronomers to speculate that the dust is being destroyed in this part of the nebula. This could be caused either by a shockwave smashing into it and destroying it or a shockwave causing a strong heating effect that evaporates the dust.

The Saturn Nebula has the designations of NGC 7009 and Caldwell 55.

The Saturn Nebula was originally a low-mass star that ejected its layers into space, forming the nebula.

It was discovered by William Herschel on September 7, 1782, using a telescope of his own design in the garden at his home in Datchet, England, and was one of his earliest discoveries in his sky survey. Herschel himself coined the term planetary nebula because, at the time, he believed that these nebulae were contracting clouds of material around young stars, which would eventually form planets in the stars’ orbit.

It was given its name from its superficial resemblance to the planet Saturn, with its rings nearly edge-on to the observer. It was named by Lord Rosse in the 1840s, when telescopes had improved to the point that its Saturn-like shape could be detected. William Henry Smyth said that the Saturn Nebula was one of Struve’s nine “Rare Celestial Objects”.