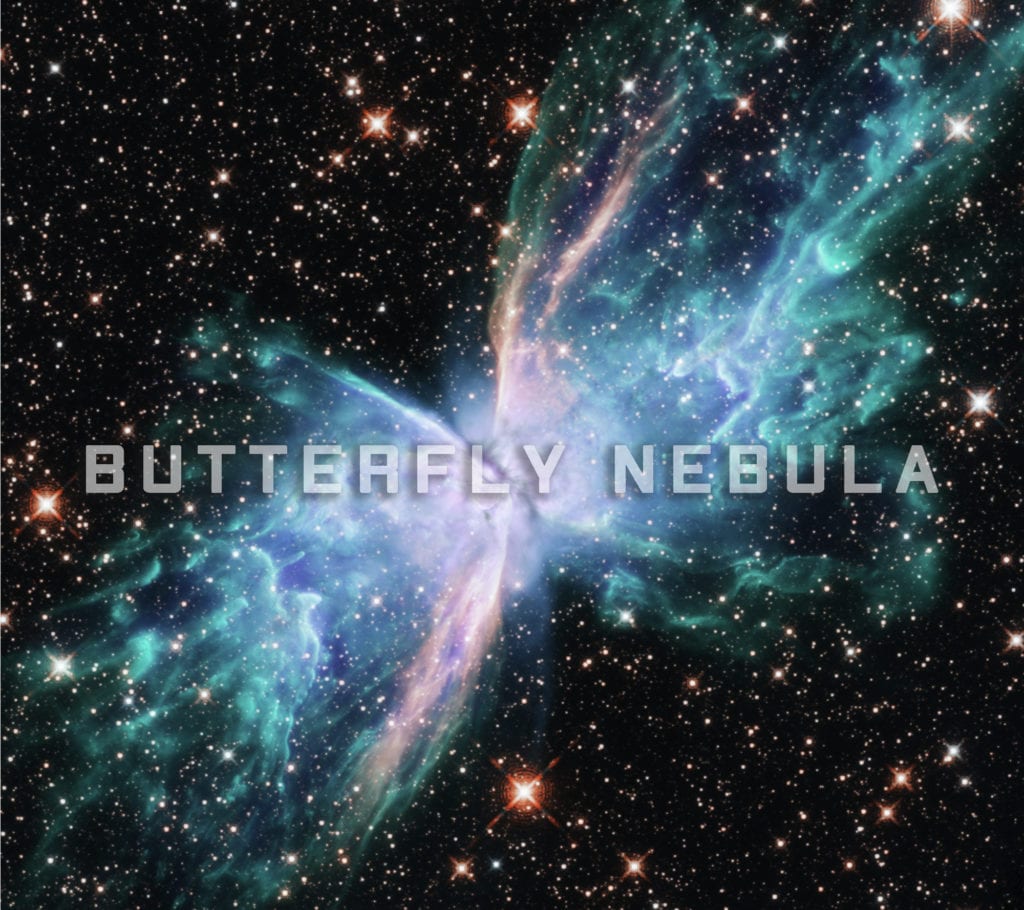 The Butterfly Nebula is a bipolar planetary nebula located in Scorpius, around 3,800 light years away from Earth. It has one of the most complex structures ever seen in a planetary nebula and was given its name for its resemblance to a butterfly. Its wingspan stretches across three light years.

Planetary nebula are formed when Sun-like stars in their final stages of life run out of fuel and start shedding off their outer layers and releasing gas at high speeds. Once the central stars begin to heat up, the radiation from the stars causes the clouds of ejected material to glow.

The central star of the Butterfly Nebula is one of the hottest known stars in the galaxy and has a surface temperature of around 222,204°C. It is hidden from view by dust clouds, but shines brightly in ultraviolet wavelengths.

The star is a white dwarf and the dust and gas surrounding it has caused the star’s outflow of material to form the bipolar butterfly shape. It has a mass that is 0.64 times that of the Sun. The dust around the star has an estimated temperature of 18,000°C and the gas in the nebula is moving very quickly across space at over 600,000 miles per hour.

This central star absorbs a large amount of the light coming from the nebula’s central region and, because of the star’s bright background, it has not been detected. It is thought to be currently evolving into a white dwarf.

The ultraviolet radiation from the star is what is making the nebula glow.

The shape of the Butterfly Nebula is thought to be determined by the rotation of the central star or star system and the result of jets blowing mass outwards from the central star perpendicular to its orbit.

It has a bipolar structure with two primary lobes and possibly another pair of lobes from an earlier phase of mass loss. It also has a prominent north western lobe which is believed to have formed about 1,900 years ago.

The Butterfly Nebula was one of the bipolar planetary nebulae lying near the galactic core that were discovered to be preferentially aligned to the galactic plane of the Milky Way. The Hubble Space telescope found that these nebulae are in different locations, they have different compositions and histories, and don’t interact with each other, yet they are mysteriously aligned with one another.

The nebula has been given the designations of PK 349+01 1, Sharpless 6, RCW124, Gum 60 and Caldwell 69. It was given the designation of NGC 6302 in the New General Catalogue. The Butterfly Nebula shouldn’t be confused with any of the several nebulae which are either similar or referred to by that name: NGC 2346, the planetary nebula M2-9, also known as Minkowski’s Butterfly or the Twin Jet Nebula, NGC 6881, NGC 5189 (Spiral Planetary Nebula), Little Dumbbell Nebula and IC 1318, also known as the Gamma Cygni Nebula.

The Butterfly Nebula has been known since 1888, but the first known study of the object dates from 1907, when the American astronomer Edward Emerson Barnard drew and described the nebula.