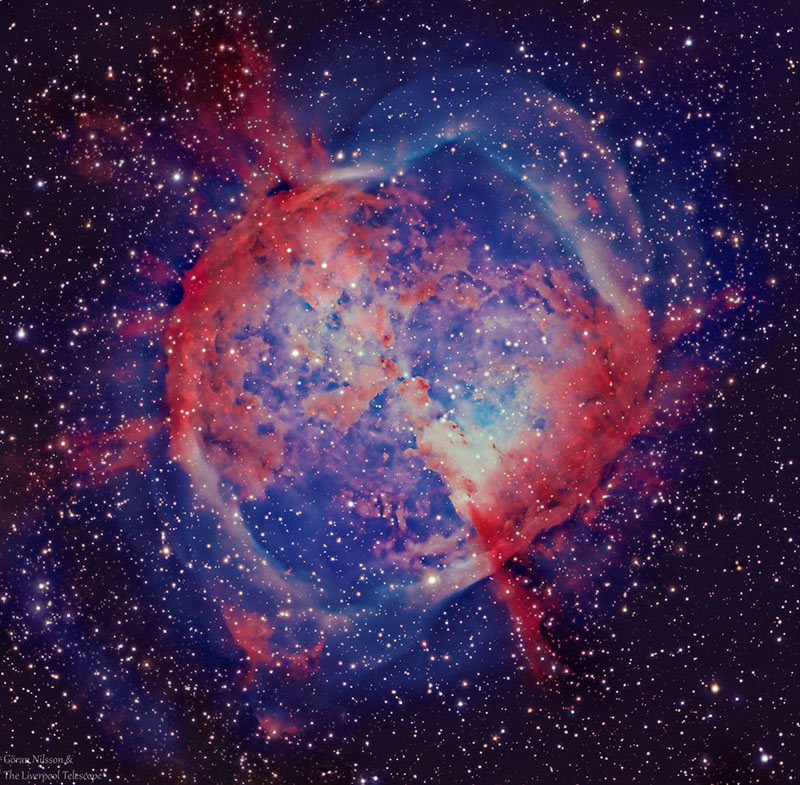 The Dumbbell Nebula puzzled astronomers for generations. The French astronomer Charles Messier (1730 – 1814) began cataloging the “nebulous objects” he found. He had mistakenly labeled some of them as comets. Upon realizing his error, he began his list, the Messier Catalogue, to prevent other astronomers from making the same mistake.

Messier found the Dumbbell Nebula in 1764, and he gave it the designation M27. During his career, Messier found 110 astronomical objects. Messier described M27 as an oval nebula that had no stars.

The English astronomer William Huggins (1824-1910) deduced the nebula’s true nature in 1864. He wrote that nebulae, in general, were not groups of suns, but gigantic masses of luminous gases.

Facts About the Dumbbell Nebula

How to Find It

Solar mass – The solar mass is a unit of measurement based on the mass of the Sun, which is approximately 2 x 1030 kg. It is used to measure the mass of other stars, nebulae, clusters, and even galaxies.

Solar radius – A solar radius is a unit of measurement used to compare a star’s size to that of the Sun, which has a radius of 695,700 km (432,000 miles). Not surprisingly, the white dwarf at the center of the Crab Nebula is a lot smaller than the Sun.