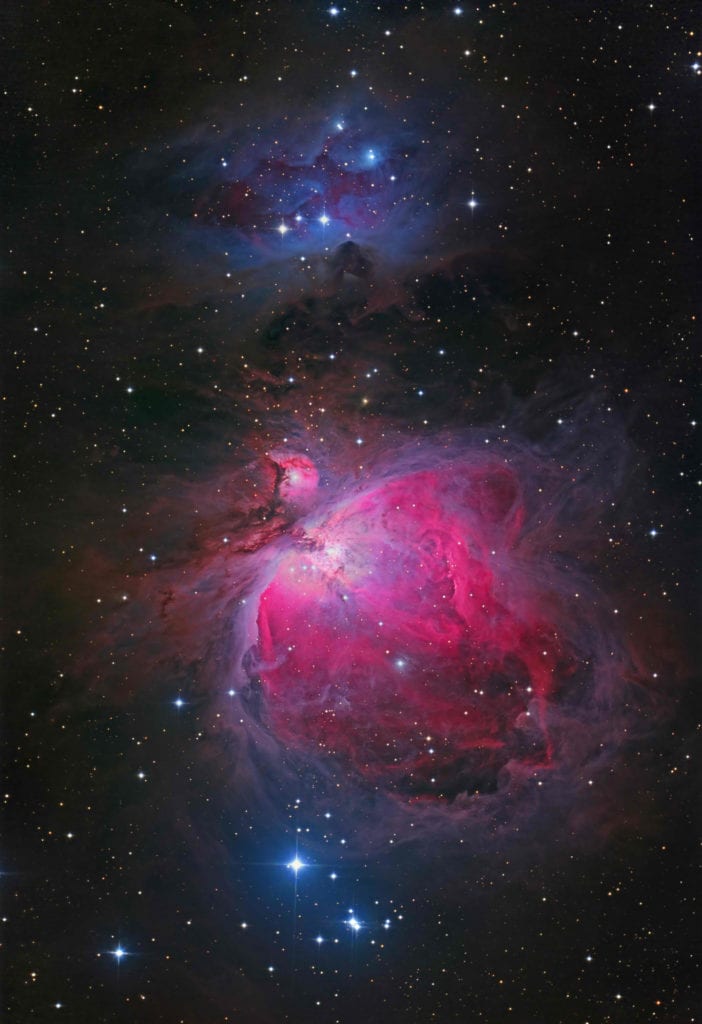 Orion the Hunter is, without doubt, a famous constellation in the sky. We can easily identify it because of the three stars forming the asterism of Orion’s Belt. Another thing that makes it easy to spot in the night sky is its size. It occupies an area of 594 square degrees. With that size, it is the 26th largest constellation that we have. Exceptionally bright stars make up its distinguishable pattern. The Orion’s Sword asterism makes the hunter’s outfit more complete.

The Orion’s Sword asterism hangs just below his belt. At a glance, it is made up of what looks like three fainter stars below the brighter stars Alnitak, Alnilam, and Mintaka of Orion’s Belt. It is a lot more than that though. Orion’s Sword is actually a rich and compact asterism. Aside from stars, it is also made up of nebulae and star clusters.

Orion’s Sword is made up of the stars 42 Orionis, Theta Orionis, and Iota Orionis. The Orion Nebula is also a part of this asterism, making it easier to recognize. Other less-known members of this asterism are NGC 1981, NGC 1977 (the Running Man Nebula), NGC 1982 (De Mairan’s Nebula), and NGC 1980 (The Lost Jewel of Orion).

The stars and deep-sky objects mentioned all together look like the sword of Orion, as perceived here on Earth. This pattern can also be the scabbard or the sheath which holds the hunter’s sword.

The Orion’s Sword asterism is one of the favorite sky patterns among amateur and professional astronomers alike. Aside from its easy-to-identify pattern, we can easily spot it with the unaided eye. It is even visible in areas where light pollution is common.

It is interesting to note that despite different locations and beliefs, a lot of people’s interpretations of the sky are similar. An example of this is the common conclusion that the hourglass pattern of stars in Orion forms a man. The same is true with the three stars forming his belt and the other three stars below it.

Latin author Gaius Julius Hyginus talked about the Orion constellation in his De Astronomica (also known as Poeticon Astronomicon). He mentioned that the sword of the celestial hunter is depicted by three faint stars. Cicero and Germanicus of ancient Rome called those three stars “ensis.” The word is from Latin which means “sword.”

In the east, Arabic astronomers also interpreted it as a sword (سيف ). They called it Saif al Jabbār. The name means “Sword of the Powerful One” (or Sword of the Giant). The constellation of Orion is called Shen in Chinese astronomy. They made a sub-constellation of the sword and called it Fa.

The Finnish people associated this asterism in their mythology and called it Kalevanmiekka, which means Kaleva’s sword. In Australia and New Zealand, where the constellation of Orion is oriented south-upward, Orion’s Sword and Belt are occasionally called saucepan or pot.

Where To See Orion’s Sword Asterism

The first thing for us to do to find Orion’s Sword is to find the constellation. Orion is in the first quadrant of the northern celestial hemisphere (NQ1). Particularly, it lies at about 5 hours right ascension and +5° declination. For us, observers here on Earth, it is visible between the latitudes +85° and −75°.

We can also use the other constellations surrounding it. Orion is surrounded by Gemini, Taurus, Eridanus, Lepus, and Monoceros.

When To See Orion’s Sword Asterism

Since Orion is an equatorial constellation, it transits at the zenith in the tropics. The best time to see it in the night sky is at 9 pm in the month of January.

The Makeup of Orion’s Sword Asterism

Orion’s Sword is a unique asterism. Unlike others, it is more than what meets the eye. The middle star that we see is actually not a star but the Orion Nebula. Let us get to know more about the stars and other components of this asterism. 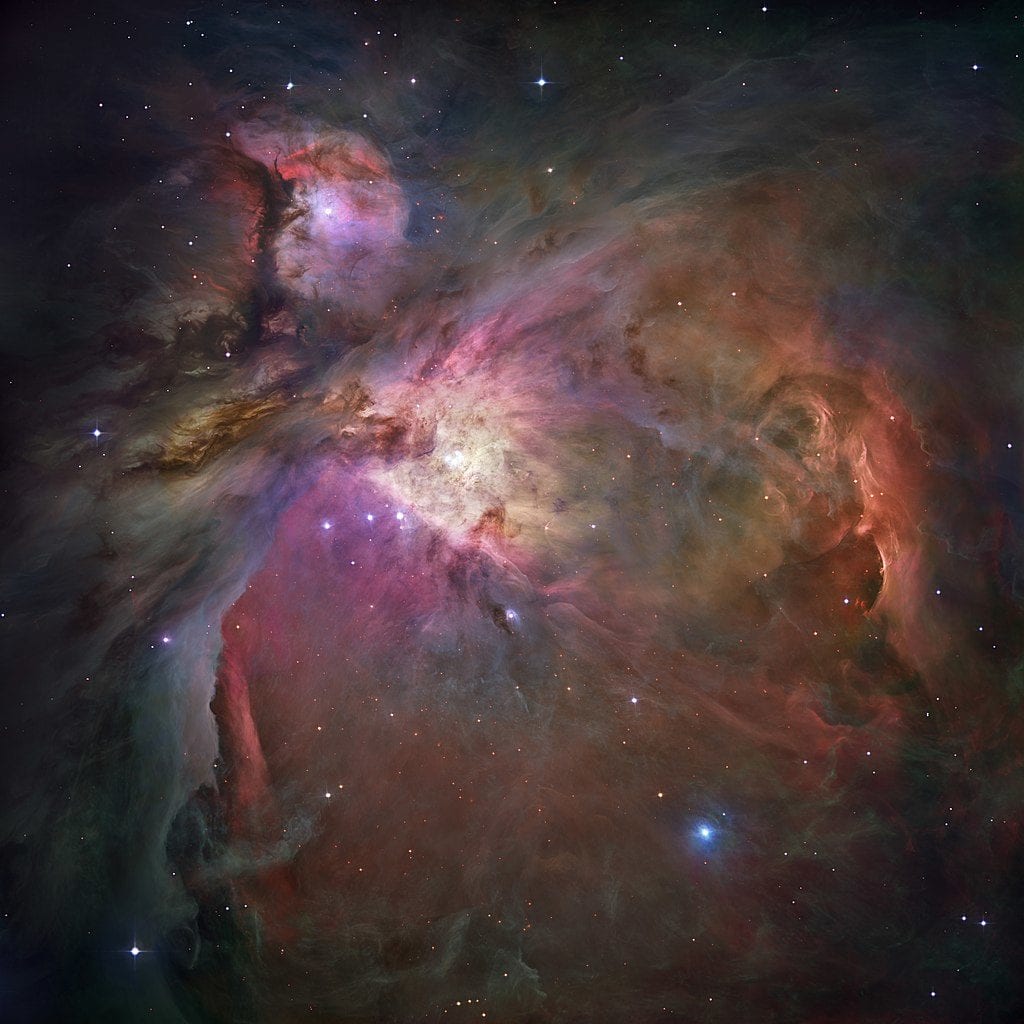 The Orion Nebula is also called NGC 1976 or Messier 42 in other catalogues. It is mostly referred to as the Great Orion Nebula in the past. It is a diffuse nebula that serves as a stellar nursery where new stars develop. This molecular cloud is close to our solar system.

Messier 42 is an immense cloud made up of gas and dust that is about 24 light-years across. This bright nebula is in the Milky Way galaxy. With an apparent magnitude of about 4.0, it is readily visible to the naked eye. It looks like the bright blob in the middle of Orion’s sword asterism. This nebula is dominated by four young and massive stars collectively called the Trapezium. They release ultraviolet light which affects the nebula as a whole.

The De Mairan’s Nebula or Messier 43 is part of the same cloud with Orion Nebula. The two look like they are separated by a dark nebulosity called the “Fish’s Mouth.” This dark lane is located north of the bright stars of the Trapezium.

The Orion Nebula is roughly 1,500 light-years away from our planet. Its open cluster is suspected to have a black hole, making it the closest black hole to Earth ever known according to NASA. Also, proplyds (ionized protoplanetary disks) are discovered to be plenty in this nebula.

In the Mayan culture, the Orion Nebula is likened to a cosmic fire of creation. 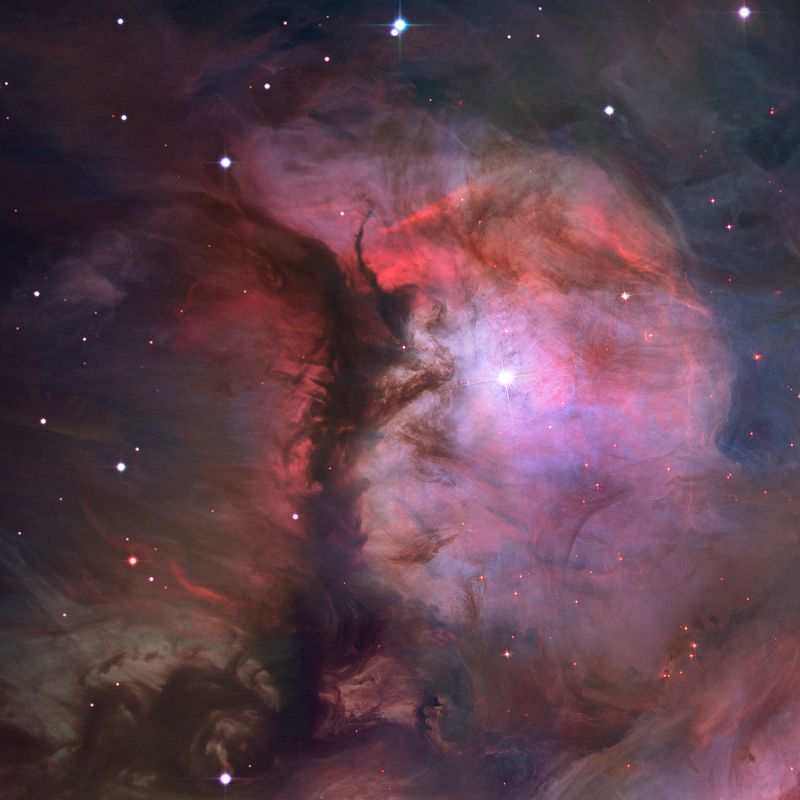 De Mairan’s Nebula is designated NGC 1982 or Messier 43. It is a stellar nursery with a notable HII region. This region is an indication of a recent star formation that took place. The name of this emission nebula is from its discoverer Jean-Jacques Dortous de Mairan. It is separated from the Orion Nebula by the northeast dark lane or the Fish’s mouth.

HD 37061 is the main ionizing star in Messier 43. It is a multiple-star system that is also variable. 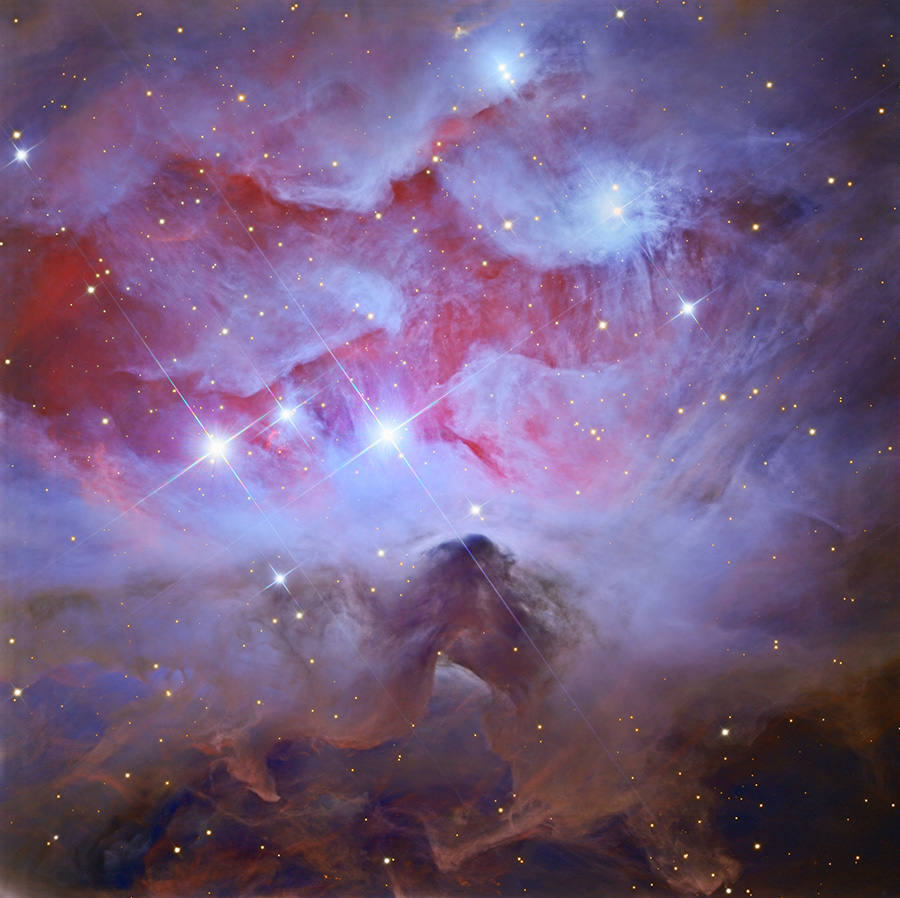 42 Orionis has an apparent magnitude of 4.59. It is a main-sequence star in the stellar class B1V. This star is located in the south-east portion of the Running Man Nebula. It is about 900 light-years away from Earth.

42 Orionis is an optical double of 45 Orionis. They are closely separated by 4.2 arcminutes. 45 Orionis is a subgiant star with the stellar classification of A9 IV/V. Its apparent magnitude is 5.24. 42 Orionis and 45 Orionis are located at the northern portion of Orion’s Sword.

Theta Orionis is a designation shared by a number of celestial objects. Mainly, it is shared by Theta1 Orionis (41 Orionis) and Theta2 Orionis (43 Orionis). 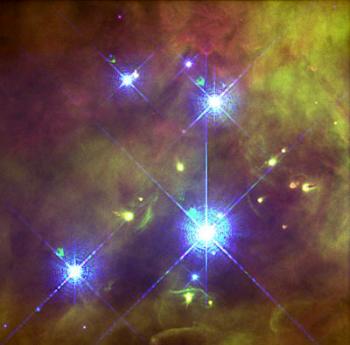 Theta1 Orionis is also known as Orion Trapezium Cluster or simply the Trapezium. It is a young cluster of stars. Its members are, in short, baby stars. It lies at the heart of the famous Orion Nebula (seen in the photo above) and is part of the Orion Nebula Cluster.

The name “Trapezium” is derived from the four brightest stars in the system. They are Theta1 Orionis A, B, C, and D. They are one arc-minute from each other. These stars are part of the blade of Orion’s Sword.

The brightest and most massive one of them is Theta1 Orionis C. It is an O-type main-sequence star. The HII region in the Orion Nebula is centered on this star. 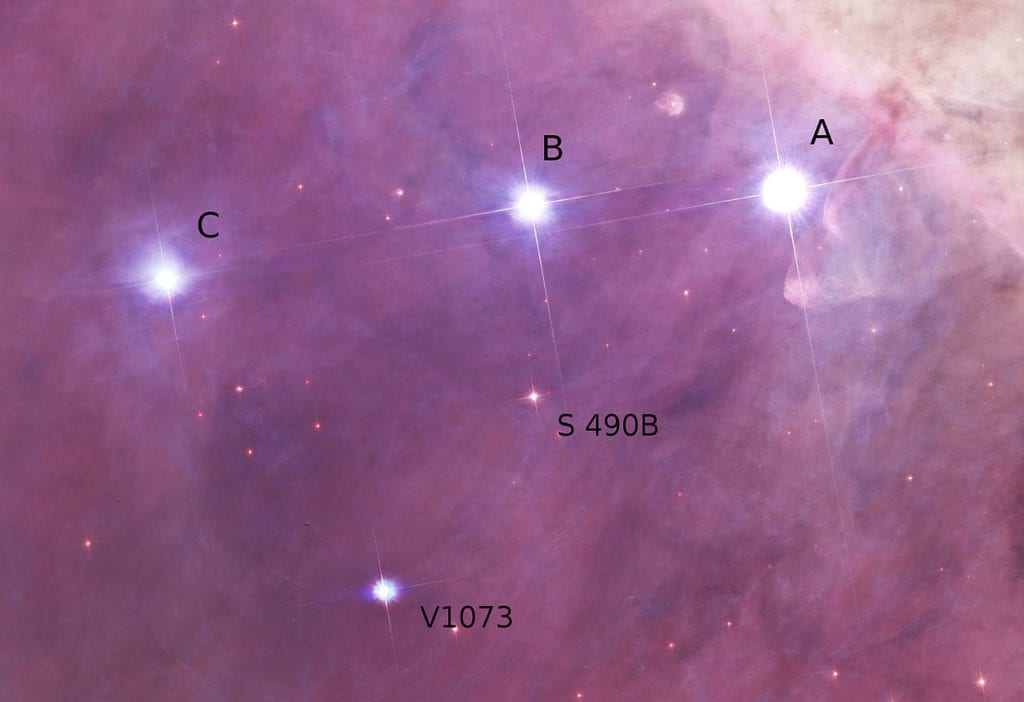 Theta2 Orionis is just a few arcminutes from the Orion Trapezium Cluster. It is a multiple star system of three stars designated θ2 Orionis A, θ2 Orionis B, and θ2 Orionis C. 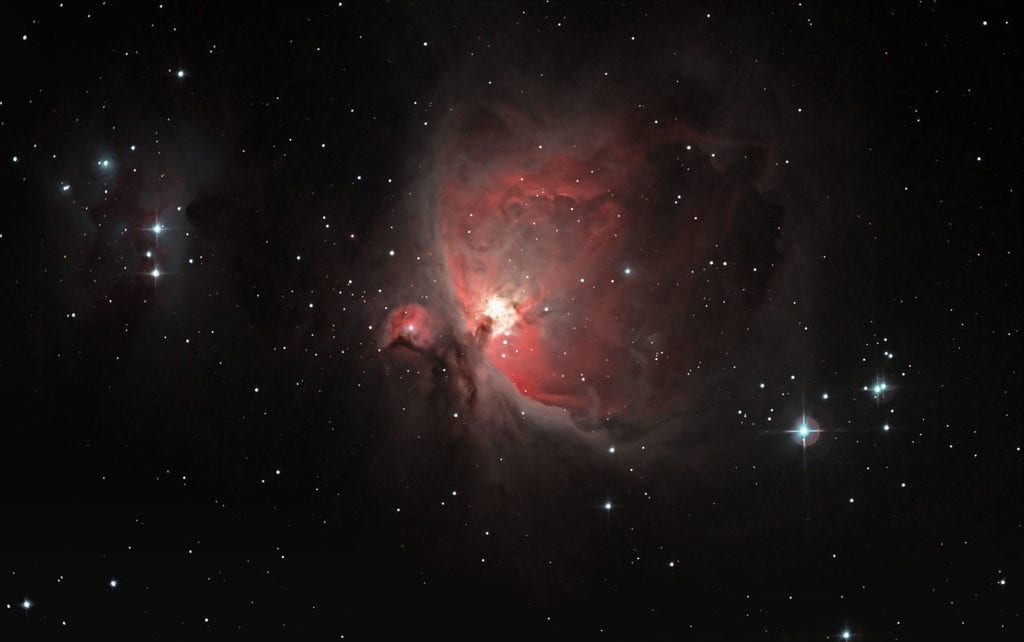 Iota Orionis is a triple star system. With an apparent magnitude of 2.77, it is the brightest component of Orion’s Sword asterism. Its traditional name was Nair al Saif (from nayyir as-sayf) in Arabic, which means “the Bright One of the Sword.” It is part of the open cluster NGC 1980. 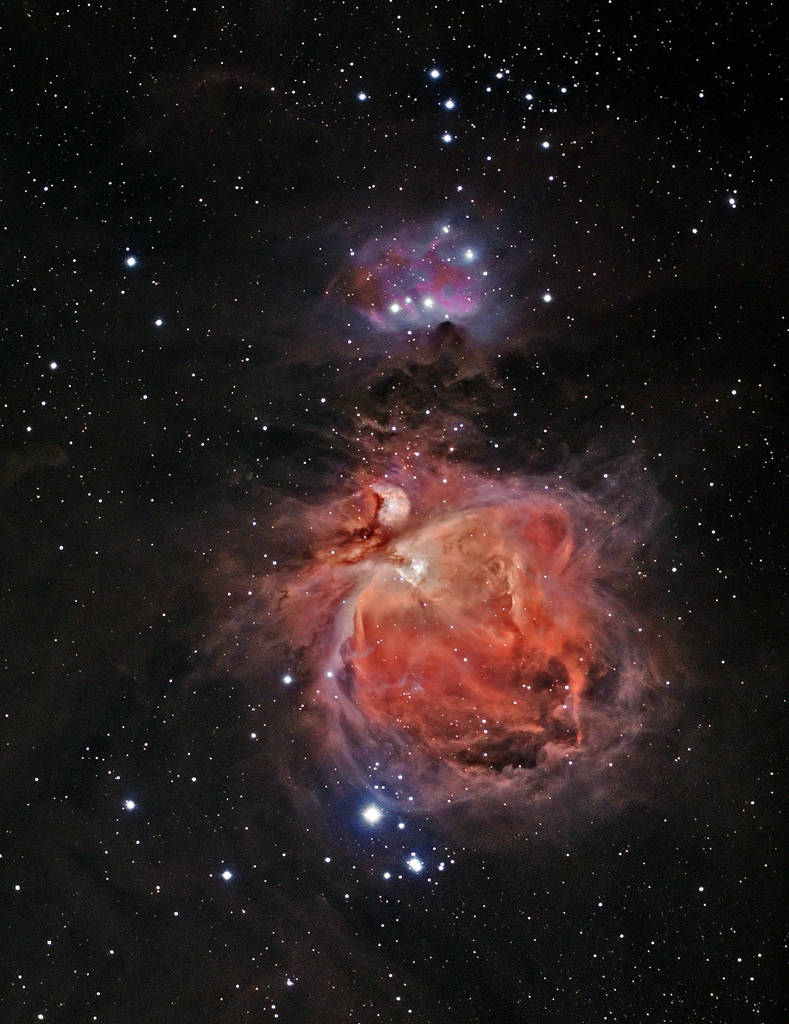 NGC 1981 is an open cluster that makes up the upper part of Orion’s Sword. It is located north of the bright Orion Nebula. It has an apparent magnitude of 4.2. The apparent size of this deep-sky object is around 28.00 arc minutes. English astronomer John Herschel discovered it in 1827. 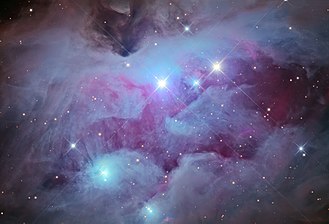 The Running Man Nebula is designated NGC 1977 in the New General Catalogue. This designation is also often used for the whole nebulosity in its neighborhood. This neighborhood includes the smaller NGC 1973 and NGC 1975. These three are collectively known as Sh2-279 (Sharpless 279). They are located in the northern part of Orion’s Sword asterism, 0.6° north of the great Orion Nebula.

NGC 1977 is a reflection nebula. It has a distinct blue color because of the light reflected from hot young stars near it. It was discovered in 1786 by William Herschel. The smaller members NGC 1973 and NGC 1975 were discovered by German astronomer Heinrich Louis d’Arrest. They are about 1,500 light-years away.

The Lost Jewel of Orion is an open cluster. It is home to young stars related to an emission nebula in Orion. Other designations for it are OCL 529, Collinder 72, and Lower Sword. It is nicknamed the “Lower Sword” since this group makes up the tip of Orion’s Sword asterism.

This deep-sky object has an apparent size of 14 × 14 arcminutes. It was discovered in 1786 by William Herschel.

One mythology directly related to Orion’s Sword is that of the Nama, an ethnic group of Namibia. They interpreted Orion’s sword as an arrow. Orion’s Belt is represented by three zebras. It was the star Rigel that represented the sky god. Betelgeuse was a fierce lion.

The Pleiades are daughters of the sky god. The husband of the Pleiades has an arrow. He used it to shoot three zebras but unfortunately missed. He wanted to get his arrow back. However, he had to be smart about it because the arrow landed near a fierce lion.

He felt so afraid that he just sat there in the cold, helpless and hungry. He was too ashamed about what happened that he could not go home. In the region where this story originated, the cold breeze and currents are said to come from the direction where this story took place.