Ursa Minor was first catalogued by the Greek astronomer Ptolemy in the 2nd century. Thanks to the Little Dipper asterism, it is an easy constellation to identify. Its brightest star, Polaris — the North Pole Star — is located at the end of the dipper’s handle and marks the location of the north celestial pole. 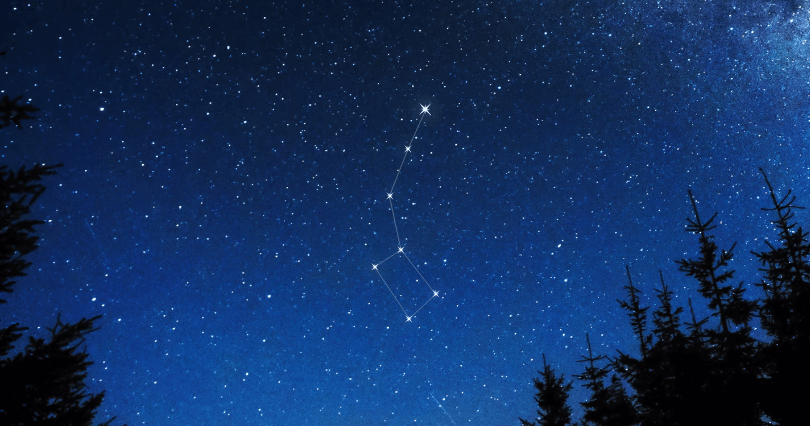 The Little Dipper asterism is comprised out of the other six brightest stars in Ursa Minor alongside Polaris — Yildun, Epsilon Ursae Minoris, Anwar al Farkadain, Akhfa al Farkadain, Pherkad and Kochab. Kochab is the second brightest star in the constellation and held the title of the North Pole Star several thousands of years ago.

This constellation contains one star with a confirmed planet and has no Messier objects. It contains five named stars. The proper names of stars that have been officially approved by the International Astronomical Union (IAU) are Baekdu, Kochab, Pherkad, Polaris and Yildun.

There is one meteor shower associated with the constellation: the Ursids. What’s more, around 4 stars have been discovered to host planets in Ursa Minor. 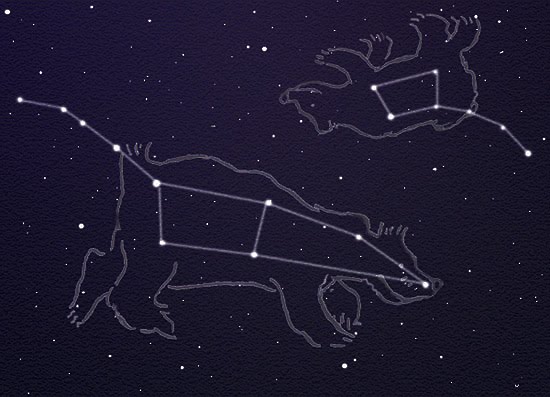 History and Mythology of the Ursa Minor Constellation

The constellation is believed to have been created by Thales of Miletus, a philosopher and astronomer who lived between 625 and 545 BC and was known as one of the Seven Sages of Greece, who were early 6th century philosophers known for their wisdom. He was believed to be descended from a Phoenician family. Phoenicians used Ursa Minor in navigation because it gave an excellent guide to true north. The Greeks sometimes called the constellation the Phoenician because of this.

In Greek mythology, Ursa Minor is related to two myths. In the first myth, Ursa Minor represents Ida, the nymph who took care of Zeus on the island of Crete when he was small, along with Adrasteia, another nymph who is represented by the larger constellation Ursa Major.

Zeus’ mother, Rhea, hid Zeus on the island when he was born to protect him from his father, Cronus, who was fearful of an old prophecy that said that one of his children would overthrow him. Therefore, he swallowed five of his children after they were born, yet Rhea tricked Cronus into swallowing a stone instead when Zeus was born. Zeus eventually fulfilled the prophecy and freed his brothers Poseidon and Hades and sisters Hera, Hestia and Demeter. He then became the supreme god of the Olympians.

In the second myth, Ursa Minor represents Arcas, son of Zeus and the nymph Callisto. Callisto had sworn a vow of chastity to Artemis, but was later unable to resist Zeus’ advances and the two had a child, Arcas. When Hera, Zeus’ wife, found out, she turned Callisto into a bear and she spent the next 15 years wandering in the woods and avoiding hunters.

After many years, Callisto came face to face with her son Arcas. Arcas was scared of the great bear in front of him and drew his spear, but Zeus quickly intervened to prevent a tragedy. He sent a whirlwind that scooped Callisto and Arcas into the heavens, where Callisto became Ursa Major, and Arcas, Ursa Minor.

That being said, Arcas is more commonly associated with the constellation Boötes because, in a slightly different version of the myth, it is the goddess Artemis who turns Callisto into a bear for breaking her chastity vow. 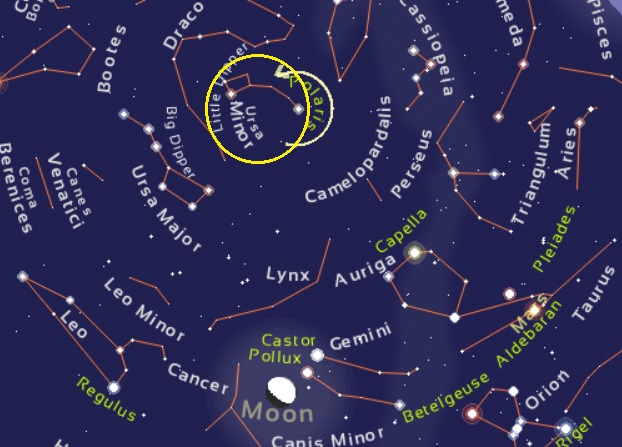 Location of the Ursa Minor Constellation

As we mentioned above, Ursa Minor is the 56th largest constellation in the sky and covers around 256 square degrees. Ursa Minor is located in the third quadrant of the northern hemisphere (NQ3) and can be seen at latitudes between +90° and -10°.

It’s right ascension is 08h 41.4m to 23h 54.0m and its declination is 65.40° to 90°. It is best viewed at 9pm during the month of June. The constellation has been traditionally important for navigation, particularly by mariners.

The easiest way to find Polaris in the night sky is to follow Dubhe and Merak, the two bright stars at the end of the Big Dipper asterism in Ursa Major, upwards and then look for the nearest bright star.

There are a number of notable stars in Ursa Minor, including Polaris, the current north pole star, and the stars that make up the asterism The Little Dipper. 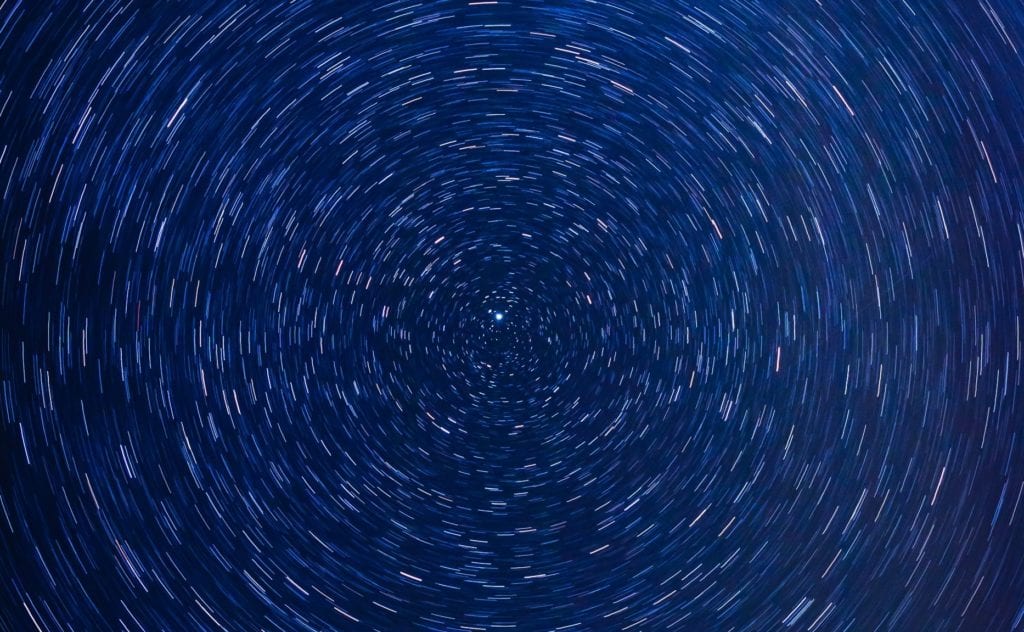 Polaris, also known as the North Star or Alpha Ursae Minoris, is the closest bright star to the north celestial pole and the brightest star in Ursa Minor. It has an apparent magnitude of 1.985 and belongs to the spectral class F7:Ib-II. The star is approximately 434 light years distant from Earth.

Polaris is actually a multiple star, consisting of the bright giant Alpha Ursae Minoris A, two smaller and dimmer companion stars Alpha UMi B and Alpha UMi Ab, and two more distant stars, Alpha UMi C and Alpha UMi D. The brightest component is giant (II) or supergiant (Ib) star belonging to the spectral class F8 that has a mass six times that of the Sun. Alpha UMi B was discovered by William Herschel in 1780 and is a main sequence star of the spectral type F3. Alpha UMi Ab is a dwarf star in a very close orbit.

When Ptolemy first observed Polaris it was a third magnitude star, but today it is 2.5 brighter and has changed to a second magnitude star. Thanks to the brightness of Polaris and its proximity to the north pole, it is an important star in celestial navigation. 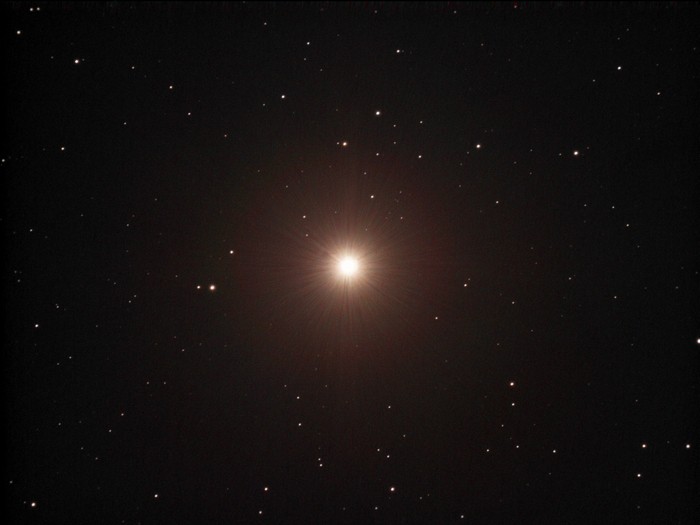 Kochab, also known as Beta Ursae Minoris, is a giant star belonging to the spectral type K4 III. It has a visual magnitude of 2.08 and is the brightest star in the bowl of the Little Dipper. It is 130.9 light years distant from the Solar System.

Kochab has around 2.2 times the mass of our Sun and is around 30 times more luminous. It’s name comes from the Arabic al-kawkab, which means “the star” and is short for al-kawkab al-šamāliyy, or “the north star”. Both Kochab and Pherkad and sometimes called the Guardians of the Pole because they appear to be rotating around Polaris. 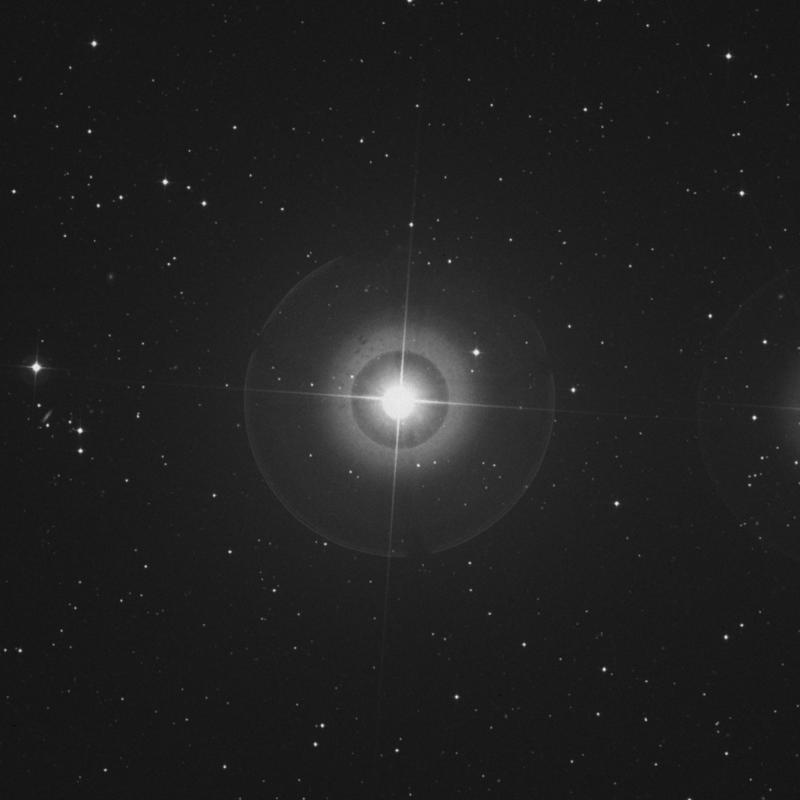 Pherkad, also known as Gamma Ursae Minoris, is an A-type star with the stellar classification A3 lab, which means that it is an intermediate luminosity supergiant. It has an apparent magnitude of 3.05 and is 1,100 times more luminous than the Sun.

Gamma Ursae Minoris is located approximately 487 light years away from us and has a radius that is 15 times that of the Sun. It is a very fast rotating star, with a rotational velocity estimated at 180 kilometres per second.

Along with Kochab, it is sometimes called the Guardians of the Pole because they both appear to be rotating around Polaris. It is also classified as a shell star that has a disk of gas surrounding its equator which causes variations in the star’s magnitude.

Its name derives from the Arabic farqad, meaning “calf,” short for the phrase aḫfa al farkadayn, which means “the dim one of the two calves”.

Yildun, also known as Delta Ursae Minoris, is a white main sequence dwarf of the spectral type A1V. It has a visual magnitude of 4.35 and is located around 183 light years away from Earth.

Its name comes from the Turkish word for “star,” yıldız. The name is sometimes also spelled Vildiur, Jildun, Yilduz and Gildun.

The magnitude of Urodelus varies from 4.19 to 4.23 with a period of 39.48 days, a result that comes from the components eclipsing each other. It is around 347 light years distant from Earth.

Anwar al Farkadain, also known as Eta Ursae Minoris, is a yellow-white main sequence dwarf star belonging to the spectral class F5 V. Visible to the naked eye, it has a visual magnitude of 4.95 and is 97.3 light years distant from Earth.

Its name comes from the Arabic phrase ’anwar al-farqadayn, which means “the brighter of the two calves.”

Akhfa al Farkadain, also known as Zeta Ursae Minoris, is a main sequence dwarf star belonging to the spectral type A3Vn. It is on the verge of becoming a giant star because it has 3.4 times the mass of the Sun, a surface temperature of 8,700 kelvins and has 200 times the Sun’s luminosity.

It has a visual magnitude of 4.32 and is 380 light years away from us. Its name comes from the Arabic aḫfa al-farqadayn, which means “the dimmer of the two calves”. 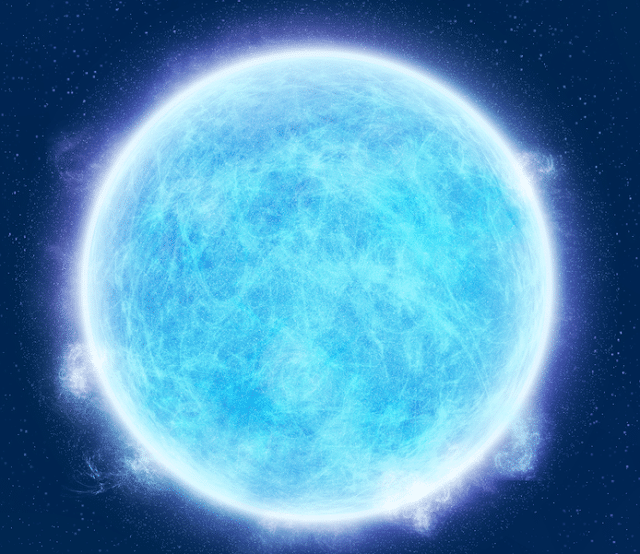 H1504+65 is the hottest white dwarf ever discovered, with an average surface temperature of around 200,000 K. It has an apparent magnitude of 15.9 and is located around 1,590 light years away from us. 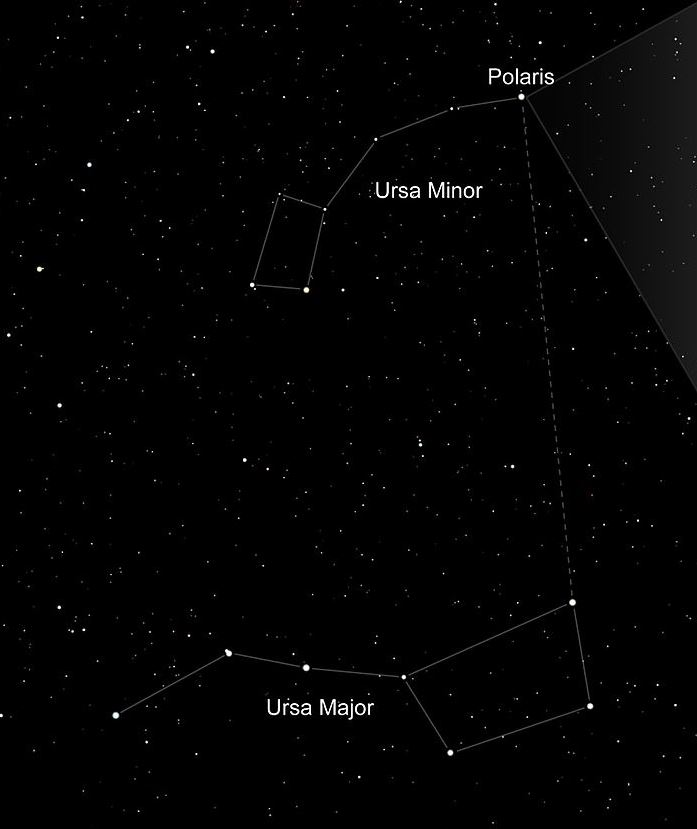 There are no Messier objects in Ursa Minor and very few deep sky objects. However, there are a few. Take a look below. 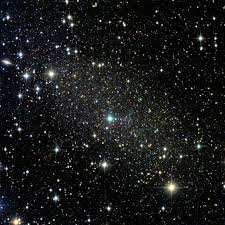 Ursa Minor Dwarf is a spheroidal dwarf galaxy, a satellite galaxy to our Milky Way, that is mostly comprised of old stars. Its center is around 225,000 light years away from Earth and it has an apparent magnitude of 11.9.

NGC 3172, also known as Polarissima Borealis, is a galaxy and the closest NGC object to the North Celestial Pole. It is located around 285 million light years away from us and has an apparent magnitude of 14.9. It stretches for around 85,000 light years.

Polarissima Borealis was first discovered by John Herschel in 1831. A type la supernova was discovered in NGC 3172 in 2010.

NGC 6217 is a barred spiral galaxy that has an apparent magnitude of 11.2. It is around 67 million light years away from Earth and can be viewed with a 10 cm telescope.

NGC 6217 is also classified as a starburst galaxy. This indicates a high rate of star formation.

NGC 6251 is an active supergiant elliptical radio galaxy. It has an apparent magnitude of 14.3 and is located around 340 million light years away from us. It has a Seyfert 2 active galactic nucleus and is one of the most extreme examples of a Seyfert galaxy, which are among the two largest groups of active galaxies, along with quasars.

The only meteor shower associated with Ursa Minor is the Ursids. The Ursids peak between December 18th and 25th. The parent body of the meteors is the comet designated as 8P/Tuttle.