The Latin name “Corona Borealis” translates to “the northern crown”, which was inspired by the constellation’s brightest stars that form a semicircular arc. The Corona Borealis constellation is closely associated with the legend of Theseus and the Minotaur in Greek mythology and is thought to actually represent a crown. 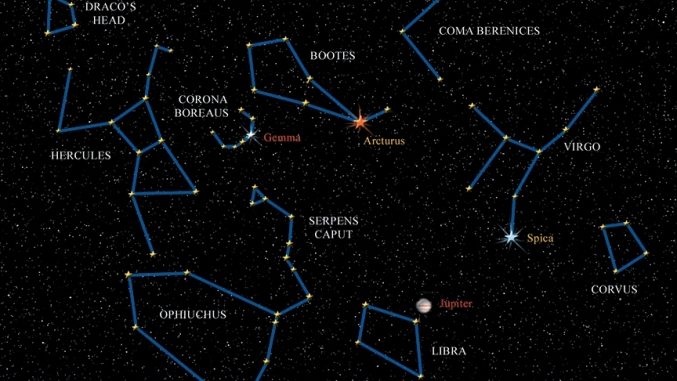 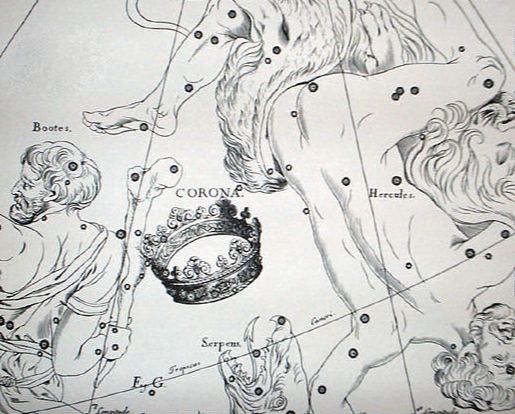 History and Mythology Of The Corona Borealis Constellation

Corona Borealis was one of the first 48 constellations listed by the Greco-Roman astronomer Ptolemy. It was was listed in the 2nd century Almagest, written by Ptolemy.

In Greek mythology, it is thought to represent a crown given by Dionysus to Ariadne, the daughter of Minos of Crete after she had been abandoned by the Athenian prince Theseus. When Ariadne wore this crown at her marriage to Dionysus, he placed it in the heavens to commemorate their wedding.

However, in another version of the tale, Dionysus gave the crown to Ariadne, who in turn gave it to Theseus after he arrived in Crete to kill the minotaur. He then used the crown’s light to escape the labyrinth after killing the minotaur. Dionysus later set the crown in the heavens to commemorate this achievement. 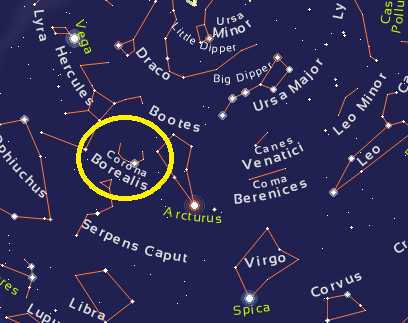 Location Of The Corona Borealis Constellation

As mentioned above, Corona Borealis is the 73rd largest constellation in the sky and is considered to be fairly small. It is located in the third quadrant of the northern hemisphere (NQ3) and stretches for around 179 square degrees.

Corona Borealis belongs to the Ursa Major family of constellations, along with along with Coma Berenices, Bootes, Camelopardalis, Canes Venatici, Draco, Leo Minor, Lynx, Ursa Major and Ursa Minor. It is surrounded by the constellations of Bootes, Hercules and Serpens Caput.

Around 5 stars in Corona Borealis constellation have been discovered to host planets.

Alphecca, also known as Alpha Coronae Borealis, is the brightest star in Corona Borealis and the 67th brightest star in the night sky. It is composed of two main sequence stars and is around 75 light years away from us. Alphecca is a fast-spinning star, having a rotational velocity of around 139 km/86.3 miles per second.

Alphecca A is enveloped by a circumstellar disk of gas and dust. It has had many names, such as Alphecca Gemma, Gnosia, and Asteroth, but Alphecca has remained the favorite. 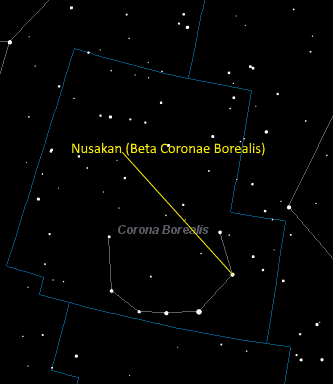 Nusakan, also known as Beta Coronae Borealis, is the second brightest star in Coronae Borealis and is located around 112 light years away from us. A binary star, it has an apparent magnitude of that varies from 3.65 to 3.72.

Beta Coronae Borealis B is a main-sequence star with around 140% of our Sun’s mass. It has 156% of its radius and is 4.5 times brighter. 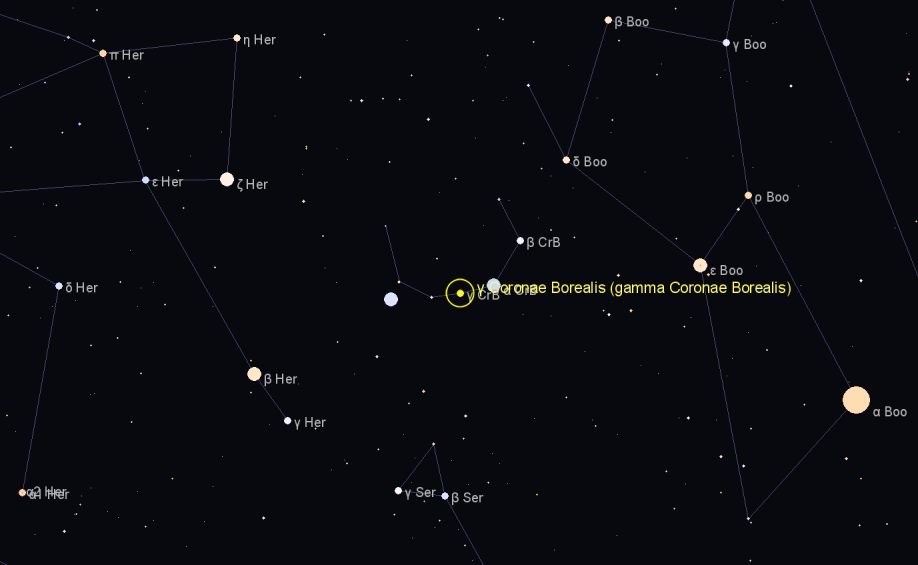 Gamma Coronae Borealis is located around 146 light years away from us. It is a binary star with an apparent magnitude of 3.83 that can vary. It has two main sequence stars, with the primary star having around 251% of our Sun’s mass.

The primary star is a fast spinner, with a rotational velocity of 182 km/113 mi per second. Its surface temperature is 7,649 K, making it hotter than our Sun and it is overall 59 times brighter than our Sun. 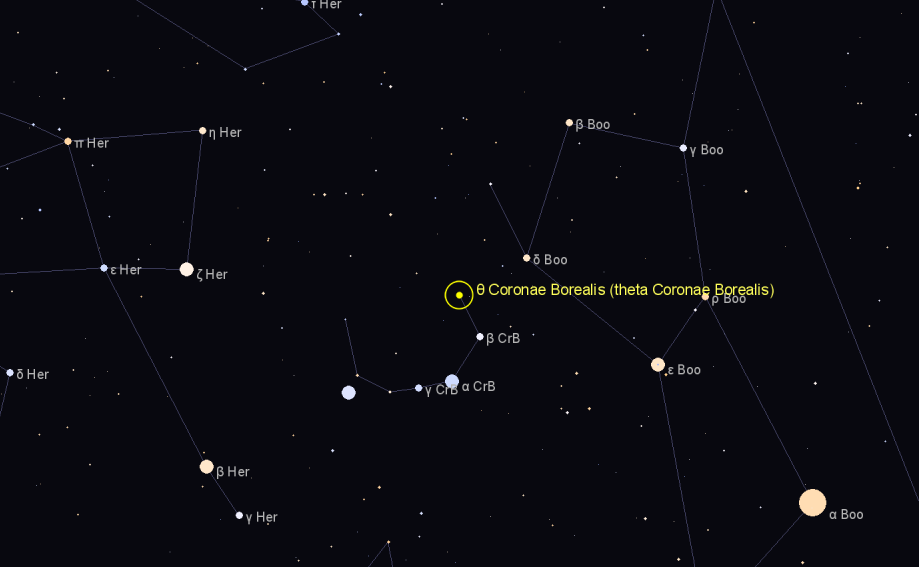 Theta Coronae Borealis B has 250% of our Sun’s mass and is located at around 86 AU away from the primary star. 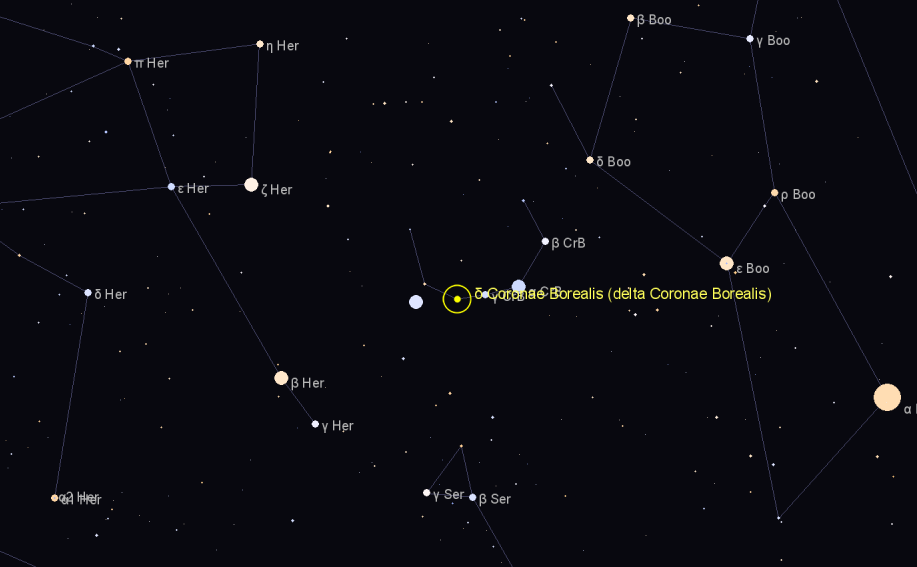 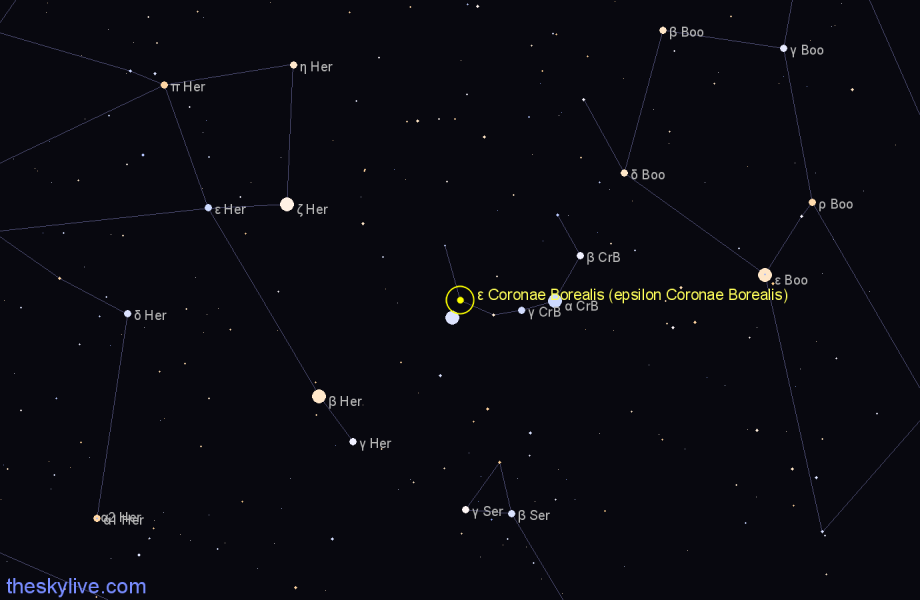 Epsilon Coronae Borealis has a primary star that is an orange giant that has around 144% of our Sun’s mass and 2,100% of its radius. It is 151 times brighter than our Sun and has an exoplanet around 6.7 times as massive as Jupiter. 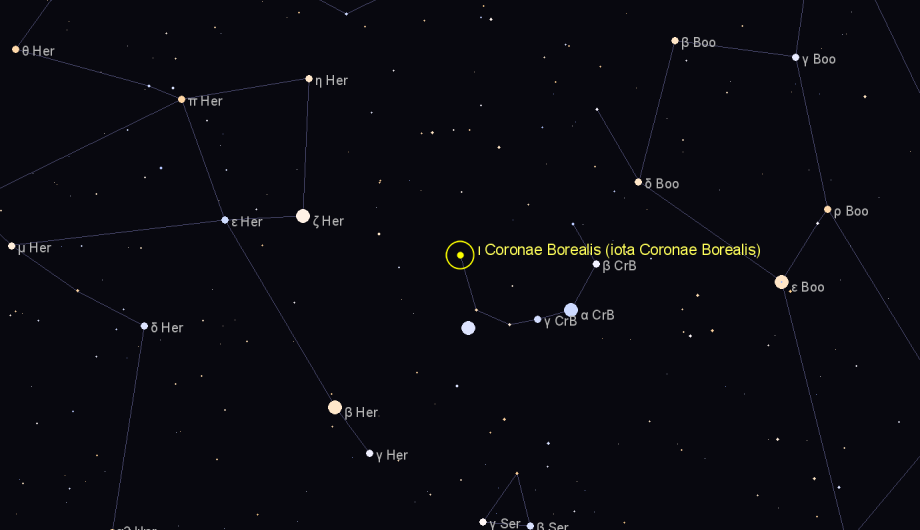 Iota Coronae Borealis is around 312 light years away from us. It is a binary star with an apparent magnitude of 4.96. The two stars in it’s system are a chemically peculiar mercury-manganese star and an A-type star.

The chemically peculiar star is the primary star and it has a temperature of 10,727 K, making it twice as hot as the Sun and 90 times brighter.

T Coronae Borealis is also known as the Blaze star and it is an unusual type of star known as a recurrent nova. It usually has a magnitude of 10.8, but during an outburst, it reaches a magnitude of 2.0.

T Coronae Borealis is located at around 806 parsecs away from us. It is a binary star with a red giant star and a white dwarf. 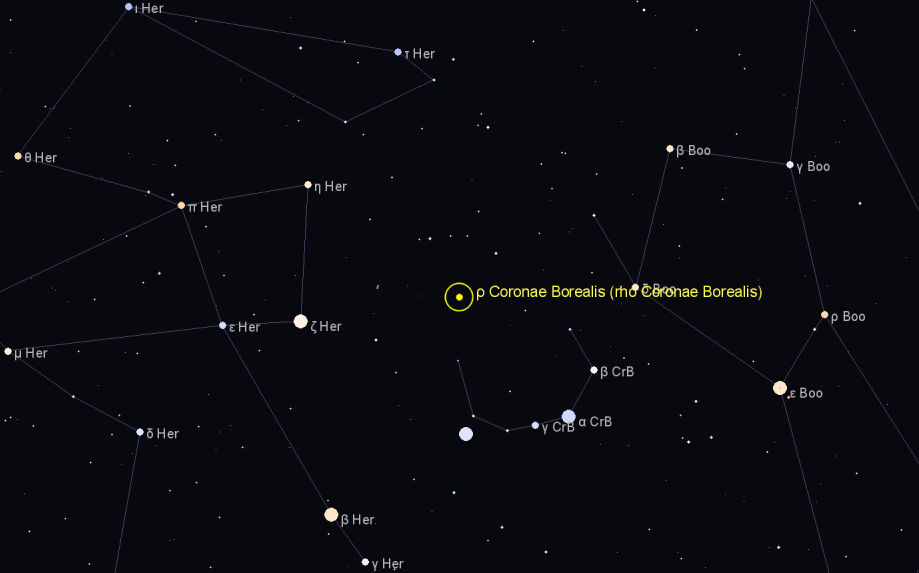 Rho Coronae Borealis is a yellow dwarf star and is actually very similar to our Sun. It is located at around 56.2 light years away from Earth and has an apparent magnitude of 5.4. 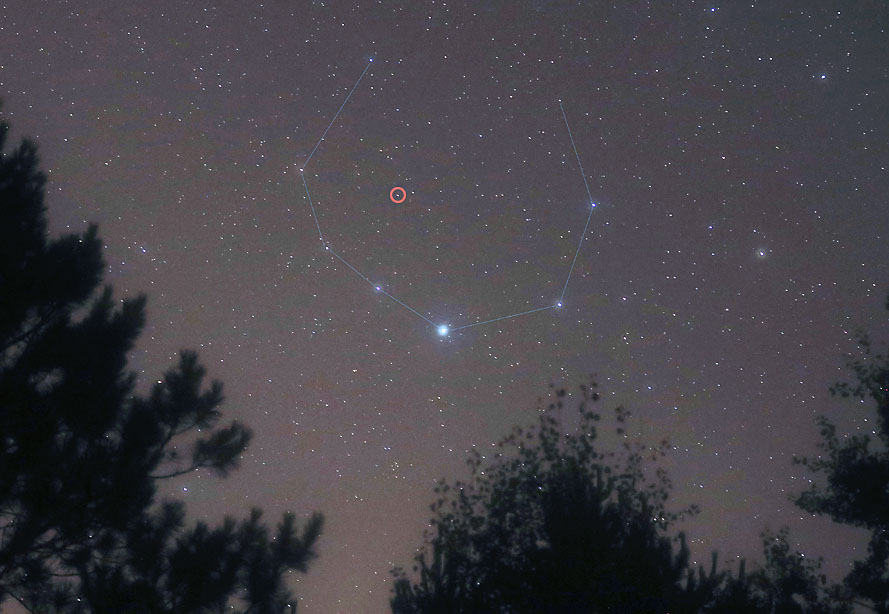 R Coronae Borealis is a yellow supergiant star that is located at around 1,400 parsecs and has an apparent magnitude that varies from 5.71 to 14.8. It is the prototype of the R Cor Bor class of variable stars, which fade by several magnitudes at irregular intervals.

R Coronae Borealis is made up of around 90% helium and less than 1% hydrogen. The remainder is mostly carbon. It has only 80% of our Sun’s mass and around 8,500% of its radius. It is also around 10,000 times brighter than our Sun. 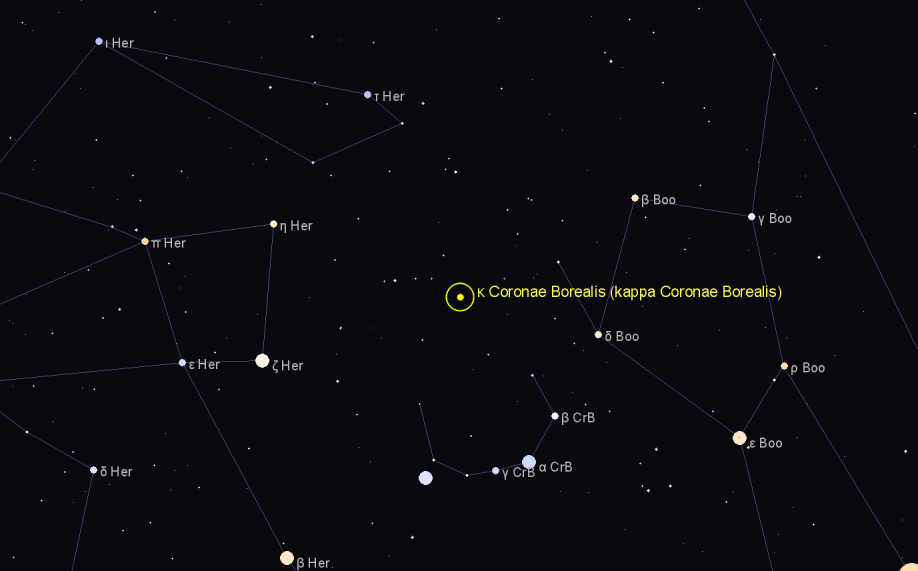 It is the first first subgiant discovered to host a disk of dust around it. The disk extends to around 120 AU. What’s more, a giant planet orbits Kappa Coronae Borealis, but is unknown which planet or it’s nature. 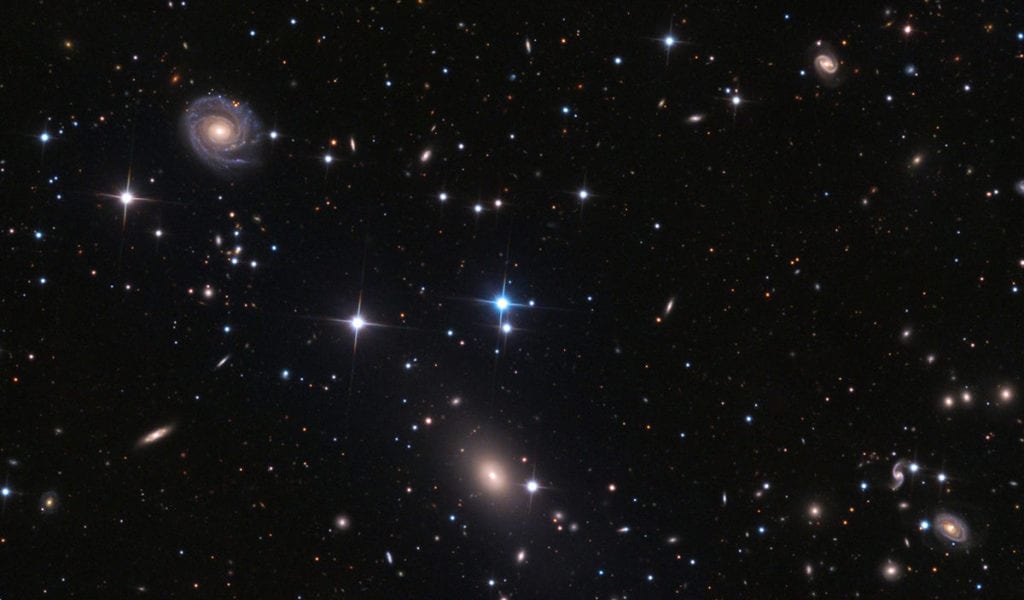 NGC 6085 is a member of the Abell 2162 galaxy cluster. It is a spiral galaxy that is located at around 454 million light years away from us. It has an apparent magnitude of 14.5 and stretches for around 226,700 light years, making it much bigger than our milky way. 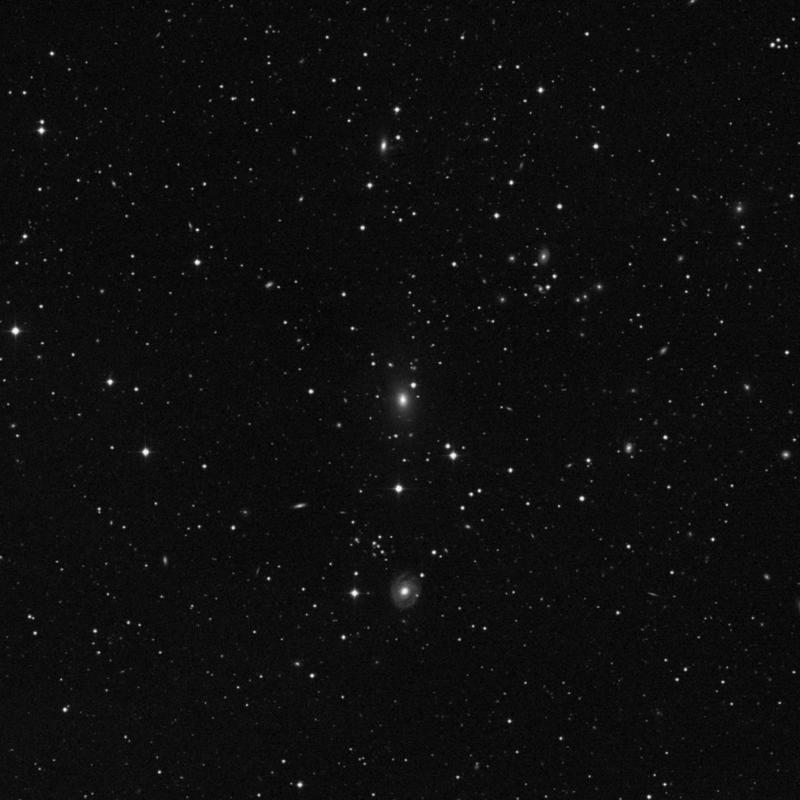 NGC 6086 is a the brightest galaxy in the Abell 2162 galaxy cluster. With a magnitude of 12.7, it is an elliptical galaxy and a supermassive black hole has been discovered in it. 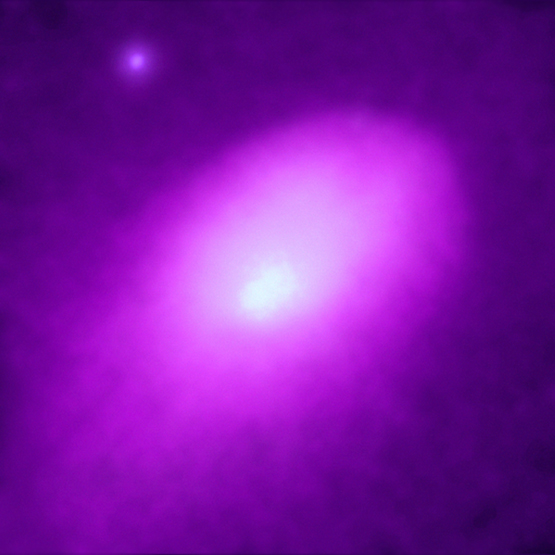 Abell 2142 is a huge x-ray luminous galaxy cluster. It is luminous because of a still ongoing merge between two galaxy clusters. It stretches for around six million light years and contains hundreds of galaxies and enough galaxies to make thousands more. 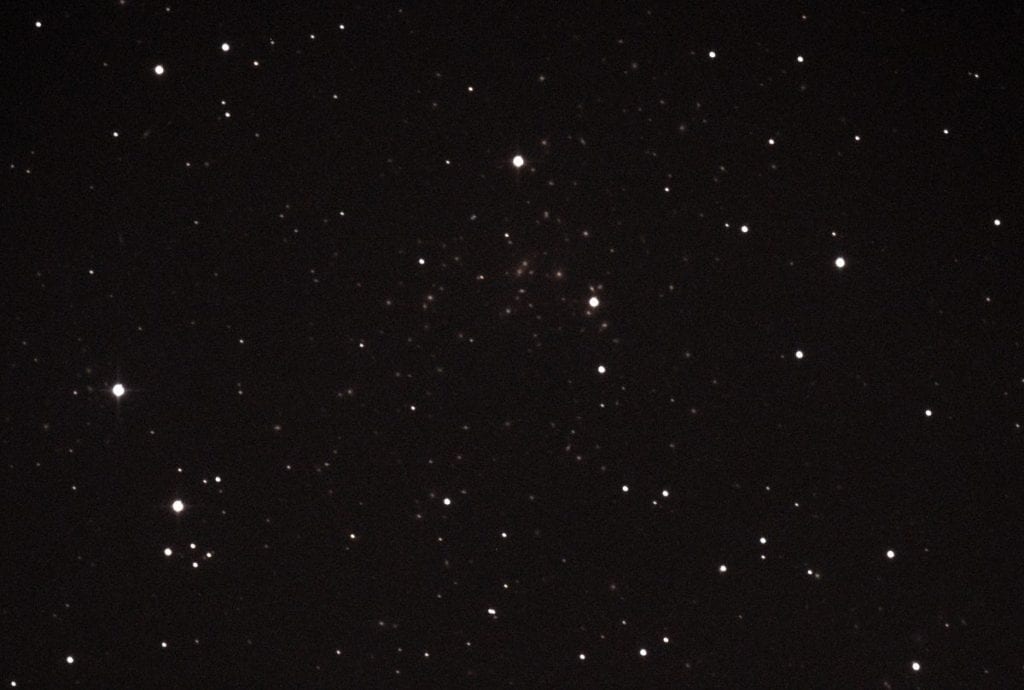 Abell 2065 is another galaxy cluster, however it is highly concentrated and contains over 400 galaxies. It is located at around one billion light years away from our Solar System.