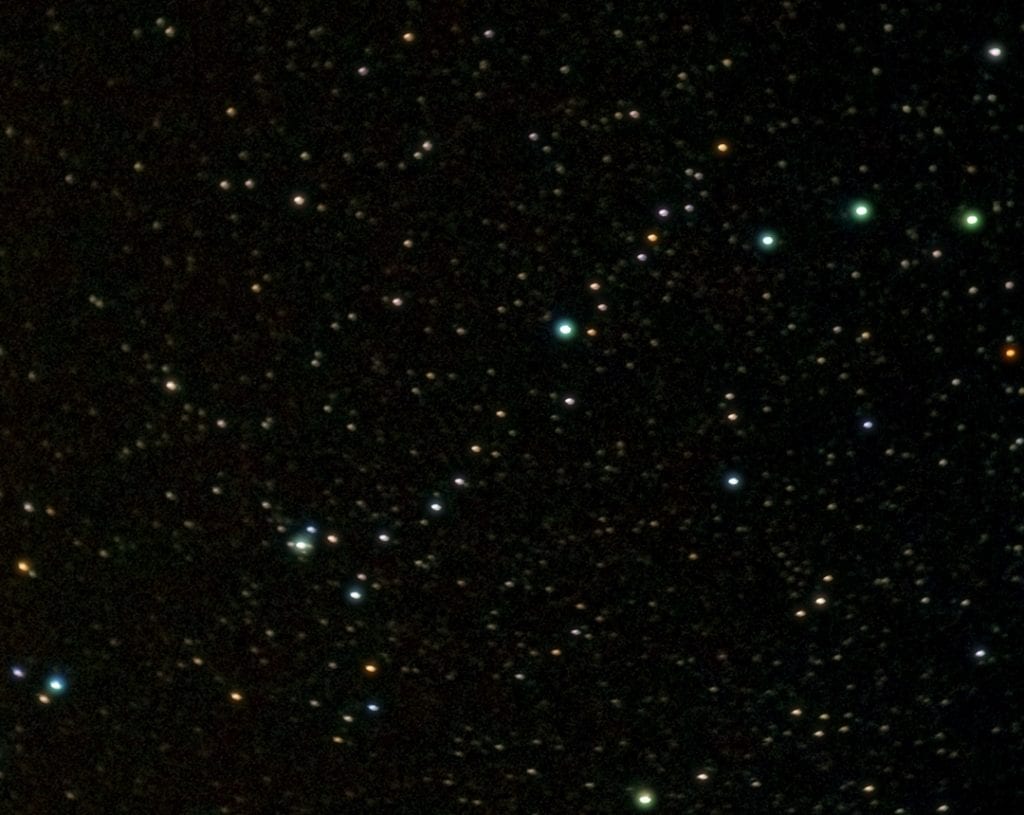 Aside from constellations, there are other fun ways to see patterns in the sky. They are known as asterisms. Constellations and asterisms are sky patterns. So what is the difference?

There are many asterisms that we can form with the stars in the night sky. Kemble’s Cascade is one of them.

Kemble’s Cascade is an asterism in the northern constellation of Camelopardalis, the giraffe. This sky pattern is also called Kemble 1. This name sets it apart from another asterism designated Kemble 2.

Although the constellation of Camelopardalis is large, it is faint. It contains no star brighter than the third magnitude.

Lying somewhere in the sky area of the celestial giraffe is a line of stars forming Kemble’s Cascade. This straight line, about 3 degrees in size, is made up of 20 or more stars. They are not bright stars, however. They have an apparent magnitude of about 5.00 to 10.00. This asterism is mostly not visible to the naked eye so we need to use binoculars or telescopes to see it.

The name Kemble’s Cascade was derived because the line of colorful stars seems to “flow” and end into NGC 1502.

What’s In A Name?

Kemble’s Cascade is a relatively new asterism. It was discovered in 1980 by father Lucian Kemble. He was an amateur astronomer and a Franciscan friar. He was in Alberta, Canada when he came across this wonderful asterism, using a pair of his 7×35 binoculars.

The person responsible for popularizing this sky pattern is Walter Scott Houston. He was a writer in the amateur astronomy magazine Sky and Telescope. He wrote for a column called “Deep-Sky Wonders” from 1946 to 1993.

The Franciscan friar wrote to Houston about his discovery. He described it in detail as “a beautiful cascade of faint stars tumbling from the northwest down to the open cluster NGC 1502.”

In December 1980, Houston wrote about this new asterism in his column. He called it Kemble’s Cascade after its discoverer.

Three asterisms were named after Kemble. Kemble 1, Kemble 2, and Kemble’s Kite. Aside from these sky patterns, an asteroid was also named in his honour. It was called 78431 Kemble.

We already know what Kemble 1 or Kemble’s Cascade looks like. Let us get a quick look at the other two.

Kemble’s Kite is an asterism in the constellation of the celestial giraffe, near the border with Cassiopeia. The outline of this pattern is a reflection of its name as it looks like a kite with a tail.

Where To See Kemble’s Cascade 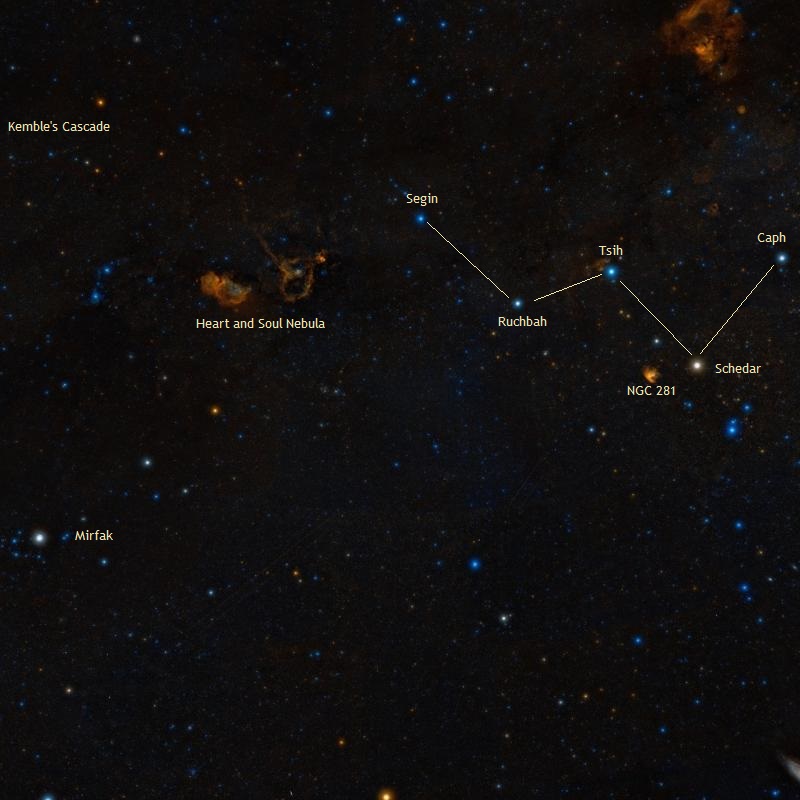 We can spot Kemble’s Cascade by locating Camelopardalis first. This constellation is in the 2nd quadrant of the northern hemisphere (NQ2) of the celestial sphere. It lies at about 6 hours right ascension and +70° declination. For us observers here on Earth, it is visible at latitudes between +90° and −10°.

There are eight constellations that surround Camelopardalis. Some of them might be familiar since they also have asterisms in them. These are Ursa Minor (the Little Bear), Draco (the Dragon), Ursa Major (the Great Bear), Lynx (the Lynx), Auriga (the Charioteer), Perseus (the Hero), Cassiopeia (the Seated Queen), and Cepheus (the King).

How to Spot Kemble’s Cascade

Another way to locate Kemble’s Cascade is by using the easy-to-spot W pattern of Cassiopeia. The cascade lies east of this famous pattern. Since it has five prominent stars, we need to identify the two at the end of this W. Those stars are Caph (Beta Cassiopeiae) and Segin (Epsilon Cassiopeiae).

From Caph and Segin, we can draw an imaginary line that extends to the constellation of Camelopardalis. That line will point us to Kemble’s Cascade.

When To See Kemble’s Cascade

The best time to see Camelopardalis in the night sky is in February, at around 9 pm.

The Makeup of Kemble’s Cascade

More than 20 stars are aligned to form Kemble’s Cascade. Unfortunately, each of these stars is not that notable. Most of them are below the fifth magnitude. This line of 5th to 9th magnitude stars seems to end in the compact open cluster called NGC 1502.

HD 24479 is a B-type star that is on the main-sequence. Another given spectral type for this is that it is an evolving subgiant. Its stellar classification is B9.5 V or B9 IV. This blue-hued star has an apparent magnitude of 4.95.

It is the brightest one in the string of stars in the asterism of Kemble’s Cascade. We can easily spot it once we are already in the constellation of Camelopardalis.

HD 24479 is 3.14 times as massive as the Sun. Its radius has expanded and is now 3.1 times the solar radius. It is 156 times more luminous than the Sun. This star is also known as H Camelopardalis and HR 1204. It lies at a distance of about 360 light-years away from us. 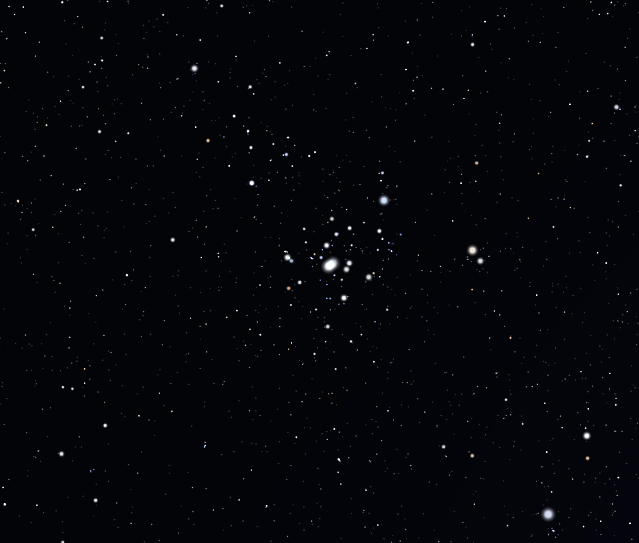 NGC 1502 is an open cluster. It is a small group that contains about 45 stars. Even though it is small, it serves as the destination for the so-called “flow” of Kemble’s Cascade.

It was discovered on November 3, 1787, by William Herschel.

Many interesting objects are in the same sky region as Kemble’s Cascade. They can help us locate Kemble’s Cascade or inform us that the asterism we are looking for is near. Let us get to know them. 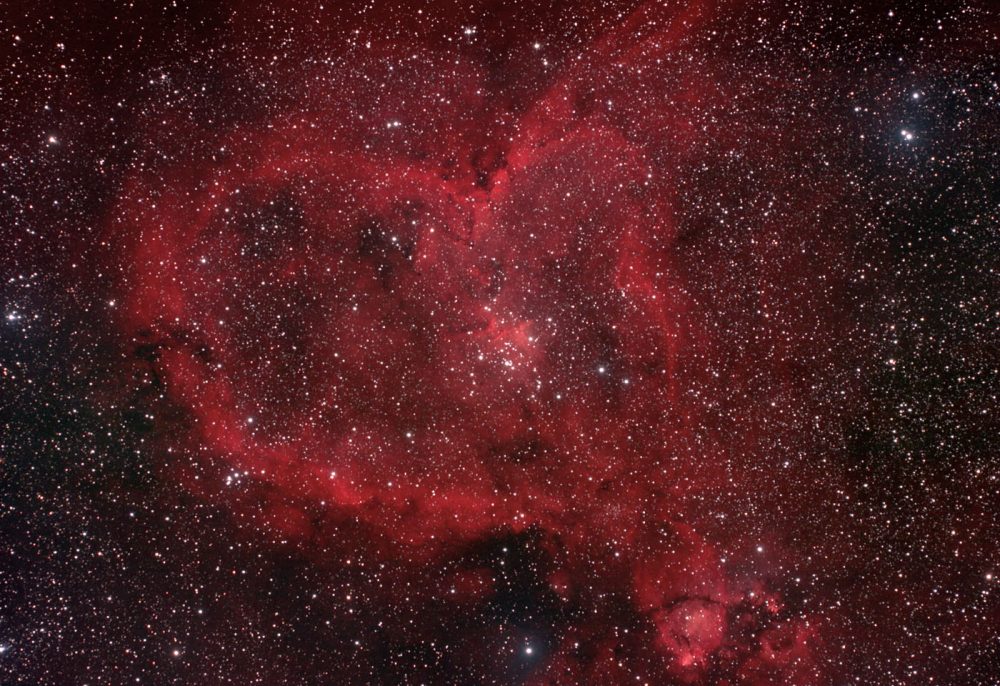 The Heart Nebula is an emission nebula. Other designations for it are IC 1805 and Sharpless 2-190. It is located in the Cassiopeia constellation, in the Perseus Arm of the Milky Way.

The red color of the Heart Nebula is from the group of stars near its center. This group is an open cluster or a cluster of young stars called Collinder 26 or Melotte 15.

The brightest part of this deep-sky object is called NGC 896. It was given such a designation because the Heart Nebula was previously not discovered as a whole. NGC 896 was the first part of the nebula to be detected. It was discovered in 1787 by William Herschel.

The Soul Nebula is another emission nebula in the Cassiopeia constellation. It covers a sky area that is equal to about four full moons. It contains some open clusters. Since it is a neighbor of IC1805 (Heart Nebula), the two of them are usually called “Heart and Soul.” The Soul Nebula is about 6,500 light-years away.

The Hidden Galaxy or IC 342 is a face-on galaxy that lies in the constellation of Camelopardalis. It is designated Caldwell 5 in the Caldwell catalogue. It was discovered in 1892 by William Frederick Denning.

IC 342 is 75 000 light-years across. It was once thought to be part of the Local Group where the Milky Way also belongs. However, further studies prove that it is a member of the IC 342/Maffei Group.

The nickname of this deep-sky object was derived because it is obscured by cosmic dust. We can see it using binoculars. The distance of this galaxy is estimated to be about 7 to 11 million light-years. The presence of dust makes it challenging to determine its exact distance.

The Oyster Nebula is NGC 1501 in the New General Catalogue. It is located near NGC 1502 of the Kemble’s Cascade.

NGC 1501 is a planetary nebula with a pulsating star in its center. This star has been of great interest to many because it is unusual for a planetary nebula to have a central star. Aside from that, its brightness typically varies in just about half an hour. William Herschel discovered it in 1787.

Aside from the asterism, Kemble’s Cascade also refers to a game called The Battle at Kemble’s Cascade. This is a board game adaptation inspired by a shoot ’em up type of video game. So how is this played?

The game has a space setting laid out by rows of cards. The bottom row is removed at every turn and a new row on the top is added. As players control their spaceships, they do things such as collect money and power-ups, shoot other players, and avoid celestial objects such as asteroids. This game is made more exciting by having “threat levels” and missions. Players have to complete these missions and achieve the most glory.