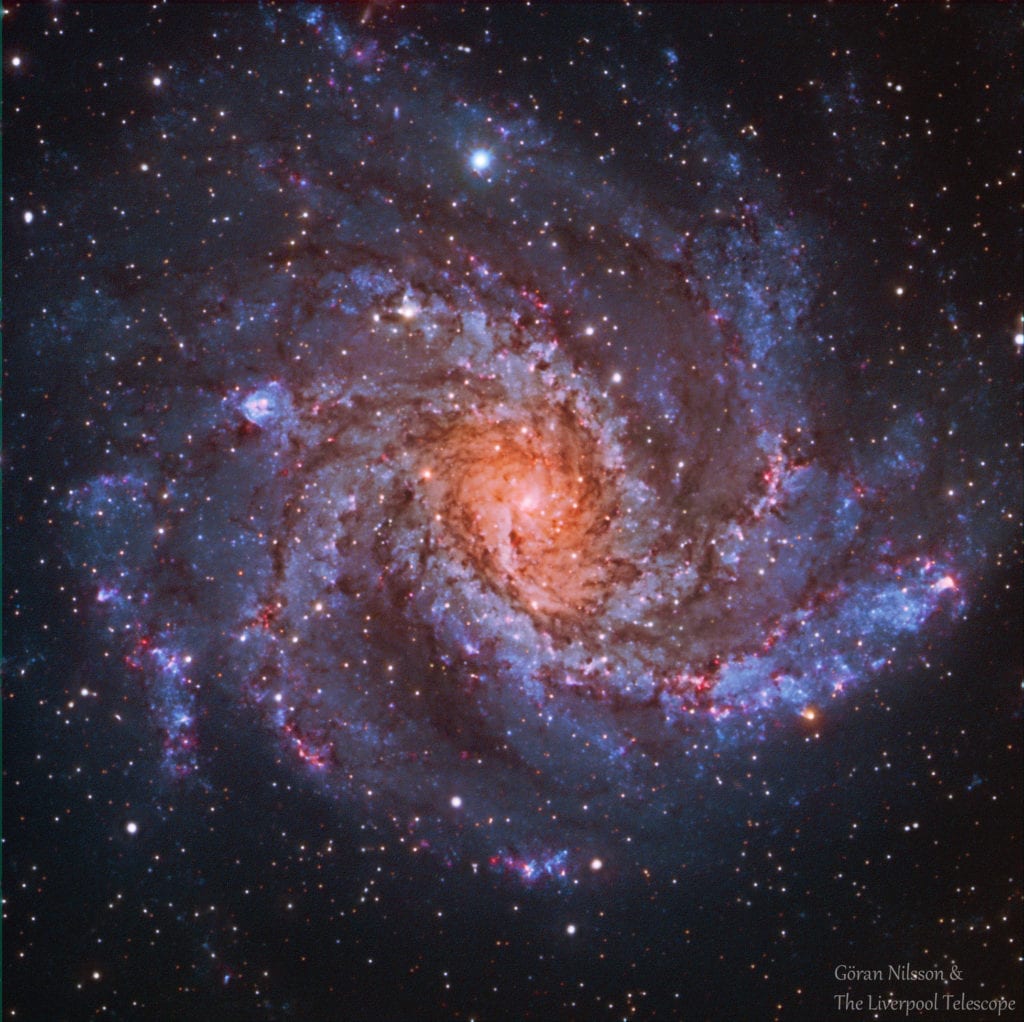 The Fireworks Galaxy, also known as Caldwell 12 and designated as NGC 6946 in the New General Catalogue, is a face-on intermediate spiral galaxy with a small bright nucleus.

It is located on the border of the northern constellations of Cepheus and Cygnus, the Swan, around 25.2 million light years or 7.72 megaparsecs away from Earth. It is also located within the Virgo Supercluster and has an apparent magnitude of +9.6.

Its size is about one third of the Milky Way’s size, with a diameter of around 40,000 light years. The galaxy contains around half the number of stars as the Milky Way, but is heavily obscured by interstellar matter due to its location close to the galactic plane of the Milky Way. This means that it dims ~1.5 magnitudes.

The Fireworks Galaxy is a site of high rate star formation and has been classified as an active starburst galaxy. It is also home to some unusual celestial objects, including the so-called ‘Red Ellipse’ along one of the northern arms that looks like a super-bubble or very large supernova remnant. It may have been formed by an open cluster containing massive stars. Within the spiral arms, several regions appear devoid of stars and gaseous hydrogen.

There are also two regions of unusual dark lanes of nebulosity, and a third peculiar object, discovered in 1967, is now known as “Hodge’s Complex”. This was once thought to be a young supergiant cluster, but was discovered to be an interacting dwarf galaxy superimposed on NGC 6946 in 2017.

Type II supernova SN 2004et was observed at magnitude 15.2 and rose to a maximum visual magnitude of 12.7 on 27 September 2004, however images taken several days earlier revealed no such star, which indicated the destruction of the star occurred on the 22 September.

During 2009, a bright star within the galaxy flared up over several months to become over one million times as bright as the Sun. However, shortly after it appeared to vanish. New observations with NASA’s Hubble Space Telescope suggest that the star did not survive, although a faint trickle of infrared light emanates from where the star used to be. The remnant glow probably comes from debris falling onto a black hole that formed when the star died.

In May 2017, supernova SN 2017eaw was observed in the northwest region of the Fireworks Galaxy at a magnitude of 12.8. It was later shown to be a Type II-P thanks to light curves obtained over the next 600 days.

Three of the oldest supernovae so far detected were revealed using the Chandra Space Telescope in X-rays.