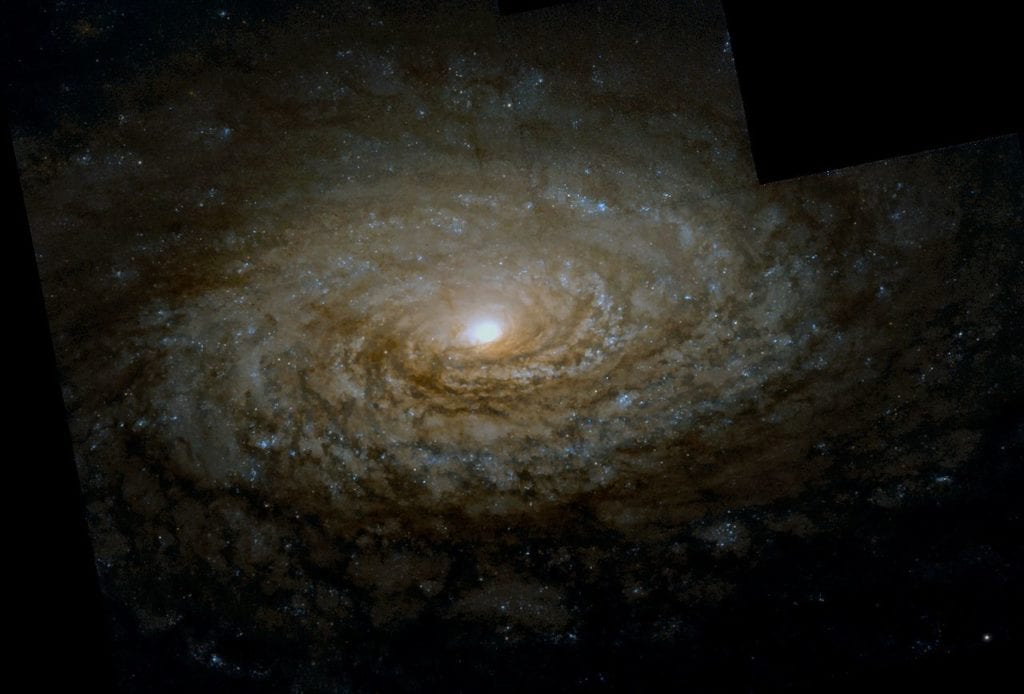 The Sunflower Galaxy, also known as Messier 63 or M63 and designated as NGC 5055 in the New General Catalogue, is a spiral galaxy located in the northern constellation Canes Venatici. It lies roughly 37 million light years from Earth and has an apparent magnitude of 9.3.

The galaxy is enormous in size, with an apparent size of 12′.6 × 7′.2. This makes it roughly the same size as the Milky Way galaxy, and it has a mass 140 billion times that of the Sun. It is also believed to have a supermassive black hole with a mass of up to 30 million Suns.

This galaxy is quite easy to find in the night sky, even though it lies in a relatively faint constellation. It is located about two thirds of the way from Alkaid, the bright star that marks the end of the Big Dipper‘s handle, to Cor Caroli, the brightest star in Canes Venatici. The best time to observe the Sunflower Galaxy from northern latitudes is in March, April and May.

Despite being easy to find, the Sunflower Galaxy is not an easy object to view in binoculars or small telescopes. In a 3.1-inch refractor, it can be identified as a galaxy. But the details and spiral arms aren’t visible. A 6-inch telescope reveals the galaxy’s bright core and an oval patch of nebulosity around it. The spiral structure is only visible in 8-inch telescopes or larger telescopes with the range to identify deep space objects.

Messier 63 is part of the M51 Group, which are a group of galaxies in Canes Venatici that also includes the famous Whirlpool Galaxy (Messier 51), the Cat’s Eye Galaxy (Messier 94), and Messier 106. M51 is the brightest galaxy in the group and M63 is a prominent member.

Why Named The Sunflower?

The galaxy is known for its bright yellow central disc. As well as a number of short spiral arm segments dotted with starburst regions and dust lanes. This is what gives it its name of the Sunflower Galaxy.

Observations in infrared wavelengths revealed that the galaxy has a two-armed spiral structure. It is home to over 400 billion stars, as well as bright starburst regions, extended emission nebulae found within the spiral arms in the outer region.

These arms appear discontinuous and patchy, and the galaxy appears to have a large number of them. This makes the Sunflower Galaxy a prototype for a class of galaxies known as flocculent spirals. Flocculent spirals are the opposite of grand design spiral galaxies, which have a clearly defined spiral structure.

In the inner region of the Sunflower Galaxy, the spiral arms are tightly wound around the core. They are less tightly wound in the outer regions.

A Type I supernova was detected in M63 on May 25, 1971. Designated SN 1971I, it reached a magnitude of 11.8 and was discovered in one of the galaxy’s spiral arms. In 1979, a faint feature resembling a giant arc-loop was detected in the galaxy’s halo, but it was unclear whether or not the feature was physically associated with the galaxy. In 2011, astronomers discovered this to be a tidal stellar stream in the halo and that it was likely the result of a merger with a much smaller dwarf satellite galaxy. The colour of the stars indicates that it was probably a galaxy belonging to the Local Group.

The Sunflower Galaxy was discovered by French astronomer Pierre Méchain and was his first discovery. Méchain was Charles Messier’s friend and colleague and he discovered the galaxy on June 14, 1779. Messier subsequently included the galaxy in his catalogue as the 63rd entry.

Less than a decade later, William Herschel observed the object and described it as a “very bright nebula, extending from north-preceding to south-following 9 or 10′ long, and near 4′ broad; it has a very brilliant nucleus”. John Herschel catalogued M63 in 1828.

Messier 63 was one of the first spiral galaxies in which the spiral structure was identified. The first to do so was William Parsons, 3rd Earl of Rosse. Lord Rosse discovered spiral structures in M63 in the mid-19th century and included the object in his list of 14 “spiral nebulae”.