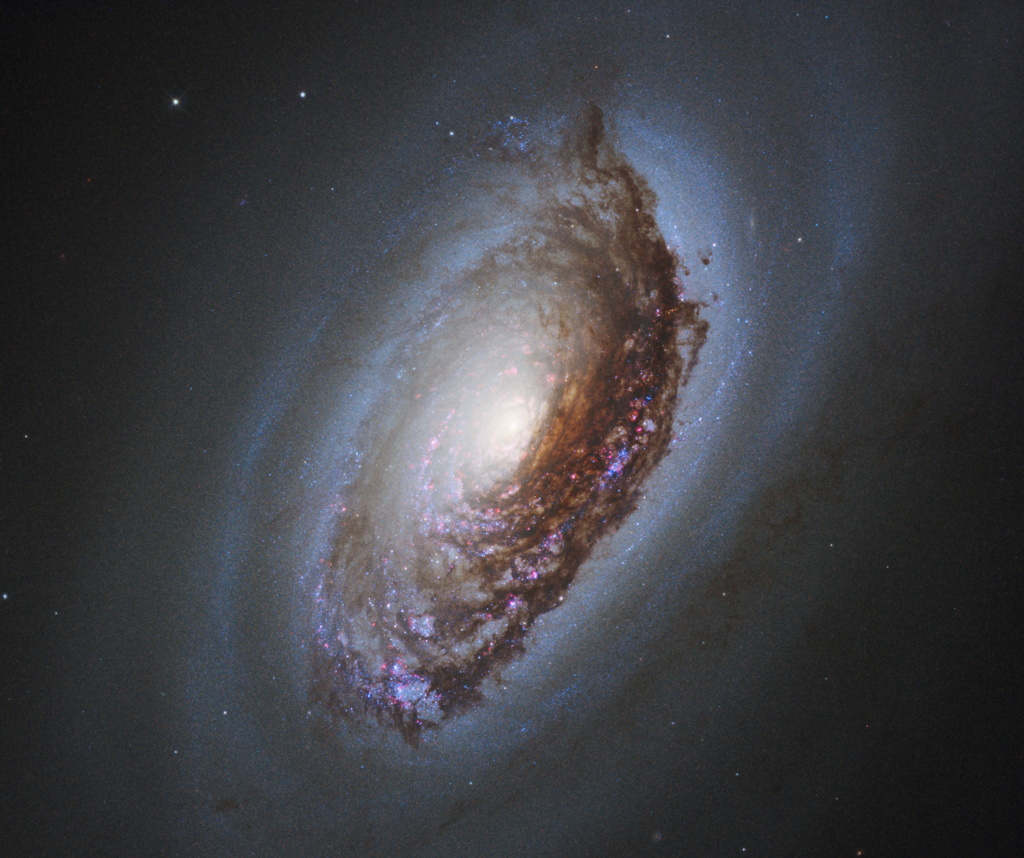 The Black Eye Galaxy, also known as Evil Eye Galaxy and designated Messier 64, M64, or NGC 4826 in the New General Catalogue, is a spiral galaxy in the constellation of Coma Berenices. It is a relatively isolated galaxy around 24 million light years away from us and has a diameter of 70,000 light years.

The galaxy is known for the enormous light-absorbing dust band in front of its central region, which gives the galaxy its name. This spectacular dark band obscures the stars in the galaxy’s bright core, yet it is still a popular target for amateur astronomers because it can be observed even in a small telescope or binoculars. A large telescope reveals the bright nucleus and the many arms spiralling outwards in the galaxy’s inner region.

That being said, it is not particularly easy to find, located about a degree to the northeast of the star 35 Comae Berenices, which lies 4 to 5 degrees to the north-northeast of Diadem, Alpha Comae Berenices. It also lies 19 degrees west and a little north of Arcturus, the fourth brightest star in the night sky.

The galaxy is also known for being composed of two counter-rotating disks, roughly equal in mass. The inner disk contains the galaxy’s spectacular dust clouds and lanes. All the stars in the Black Eye Galaxy rotate in the same direction as the gas in M64’s core region, clockwise, while the gas in the outer regions rotates in the other direction.

The gas in the galaxy’s outer regions stretches across an area spanning around 40,000 light years, while the inner region has a radius of about 3,000 light years and rotates at a speed of about 300 kilometres per second.

As the two disks are rotating in opposite directions, this may explain the intense starburst activity with the galaxy. The gases in the disks collide, which results in new star formation. The Black Eye Galaxy is home to about 100 billion stars, but does not contain any known Cepheid variables, which is very unusual for a galaxy this close to us. Any Cepheids in the galaxy should be visible in the telescopes currently used, possibly even the Earth-based ones. Therefore, different astronomers give different distances at which M64 is located, ranging from 12 to 44 million light years.

No supernovae have been detected in the galaxy and the galaxy as a whole is receding from us at 408 km/s. The Black Eye Galaxy is a known radio source, catalogued as PKS 1254+21.

The Black Eye Galaxy was discovered by the English astronomer Edward Pigott on March 23, 1779 and then found independently by the German astronomer Johann Elert Bode 12 days later, on April 4.

Charles Messier discovered the galaxy on March 1, 1780 and subsequently included it in his catalogue as M64. He described it as a “nebula discovered in Coma Berenices, which is about half as apparent as that which is below the hair”. Even though Pigott was the first to discover the object, his discovery wasn’t published until January 1781. Bode’s was published first, in 1779, and Messier’s came in the summer of 1780.

William Herschel was the astronomer to discover the dark dust and compare it to a “black eye” in 1785.