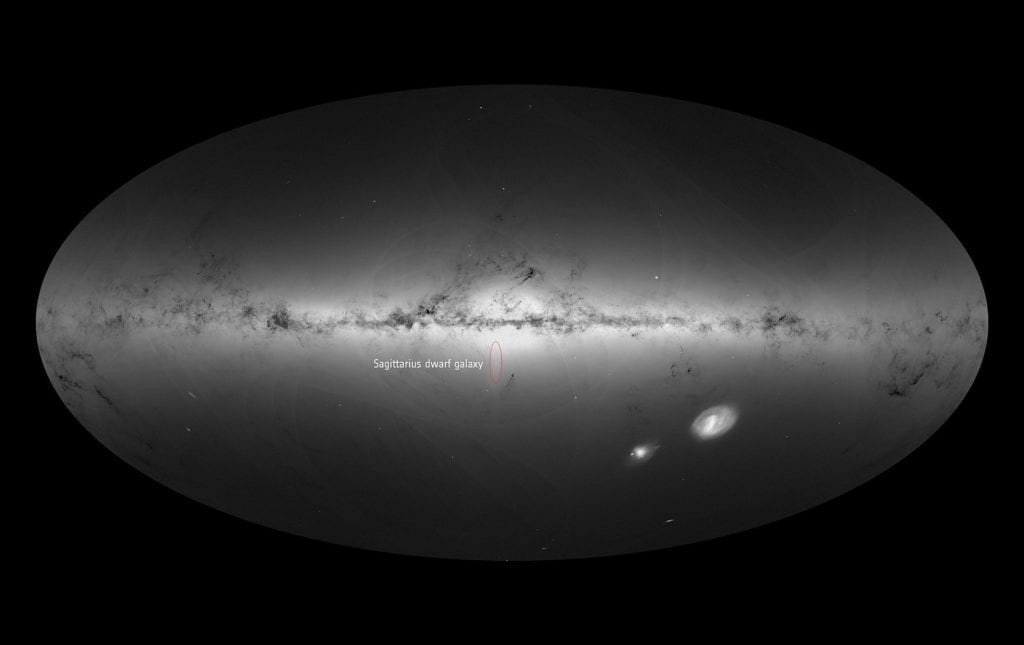 The Sagittarius Dwarf Elliptical Galaxy contains four globular clusters. The brightest of these four was known well before the discovery of the galaxy itself in 1994 and is designated NGC 6715 or Messier 54. M54 seems to be located at the galaxy’s core, while the other three — Terzan 7, Terzan 8 and Arp 2 — reside within the main body of the galaxy. Palomar 12 and Whiting 1 also are now generally thought to also be associated with the galaxy.

When first discovered, the galaxy was immediately recognised as being the nearest known neighbour to the Milky Way at the time. The disputed Canis Major Dwarf Galaxy, discovered in 2003, might be the actual nearest neighboring galaxy. Despite being one of the closest companion galaxies to the Milky Way Galaxy, the main parent cluster is on the opposite side of the galactic core from Earth, and consequently is very faint, although covering a large area of the sky.

The galaxy appears to be an older galaxy and has little interstellar dust. It is composed largely of Population II stars, older and metal-poor, as compared to the Milky Way. No neutral hydrogen gas related to the galaxy has been found.

The Sagittarius Dwarf Elliptical Galaxy has multiple stellar populations, ranging in age from the oldest globular clusters (almost as old as the universe itself) to trace populations as young as several hundred million years. It also shows an age-metallicity relationship — its old populations are metal poor, while its youngest populations have super-solar abundances.

The Sagittarius Dwarf Elliptical Galaxy was officially discovered in 1994 by a team of astronomers. These were Rodrigo Ibata, Mike Irwin, and Gerry Gilmore. Over the years, in its looping, spiralling path, it has passed through the plane of the Milky Way several times. This is thought to have had an impact on the star formation history of the Milky Way.

In 2018 the Gaia project of the European Space Agency showed that the galaxy had caused perturbations in a set of stars near the Milky Way’s core. This caused unexpected rippling movements of the stars triggered when it moved past the Milky Way.

The Sagittarius Dwarf Elliptical Galaxy main cluster is suspected to pass through the galactic disc of the Milky Way within the next hundred million years. While the extended loop-shaped ellipse is already extended around and through our local space and on through the Milky Way galactic disc, and in the process of slowly being absorbed into the larger galaxy.