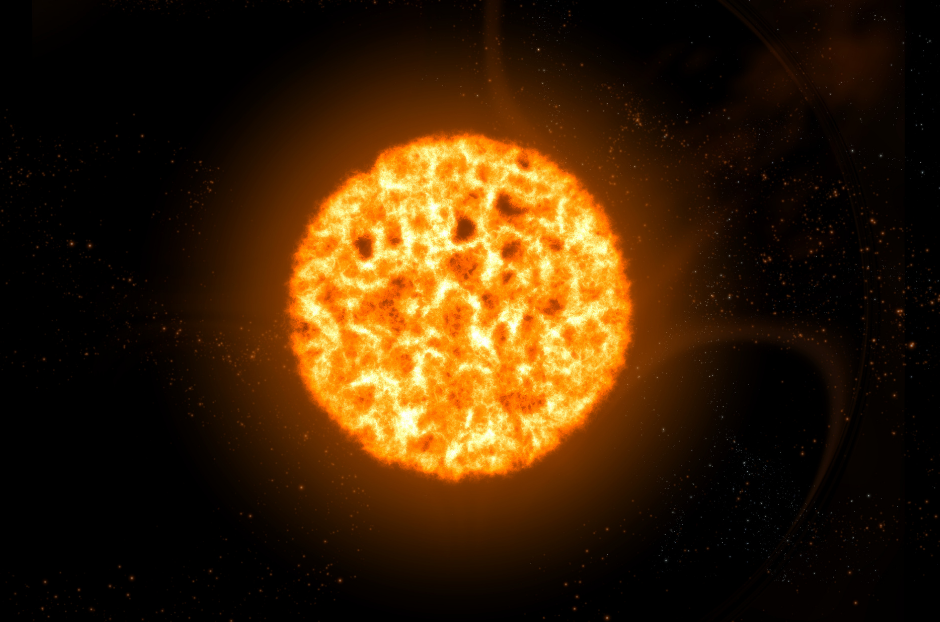 Let’s kick of with some hot facts about Red Supergiant Stars!

What Is a Red Supergiant Star? 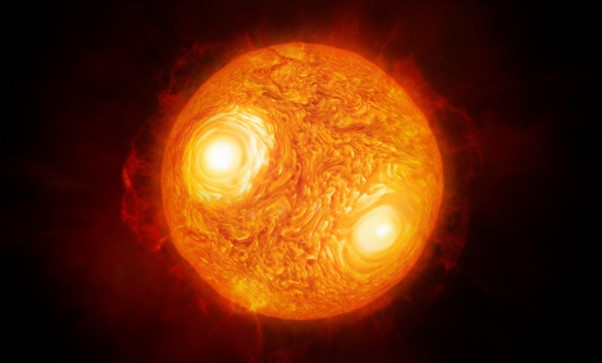 Red supergiants are very large stars that are approaching the later stages of their stellar life. Though they are great in size, the red color indicates that stars of this type have a relatively low surface temperature.

Red supergiant stars are labeled with Yerkes class I luminosity. This means they are among the most luminous stars out there. They shine with the luminosity of 1,000 to hundreds of thousands of Suns combined. They belong to the K and M spectral types.

Red supergiants are 10 to 40 times more massive than the Sun. They have a radius that is several hundred to 1500 times that of the Sun. To compare, red giant stars swell from only about 200 to 800 times the Sun’s current size.

Most red supergiants are variable stars. This means, their degree of brightness change and fluctuate as seen on Earth. Also, these stars are actively losing mass. Nebulae have been seen around them as they expel material.

Supergiant stars occupy the same band in the upper part of the HR diagram. However, red supergiants are different from blue supergiants.

While both are luminous star types with luminosity class I, blue supergiants are much hotter. These OB-type stars have surface temperatures between 10,000 to 50,000K. Also, they shine with about 10,000 to a million solar luminosities. An example of a blue supergiant is the bright naked-eye star Rigel in the Orion constellation. 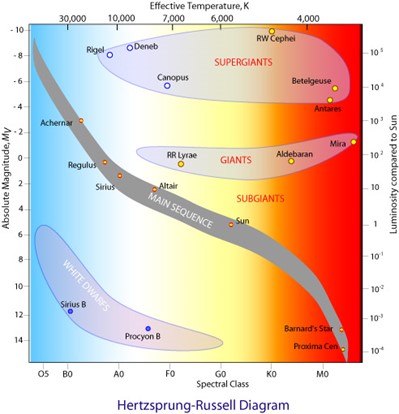 The Hertzsprung-Russell diagram or HR diagram (as shown above), is a graph that shows the different types of stars. We can easily plot the stars in this graph against their magnitudes and temperature.

Red supergiant stars have K and M spectral types with class I luminosity. Stars of this type are 1,000 to 800,000 more luminous than the Sun.

Red supergiants are much larger than the Sun, with hundreds to thousands of times the Sun’s radius. The maximum radius of a red supergiant is 1500 solar radii according to the Hayashi limit.

The surface temperatures of red supergiants are around 3,500 to 4,500 K. This is relatively cooler compared to dwarf stars like our Sun.

Red supergiant stars have a relatively short lifespan compared to other stars because of their size. They consume their fuel faster and have a lifespan of roughly 3 to 100 million years. In comparison, less massive stars will stay in the red giant phase for about a billion years.

An object finally becomes a star when it is powered by hydrogen fusion in its core. By this time, it is already a main-sequence star—like the Sun.

Main-sequence stars with more than 8 times the mass of the Sun will become red supergiants when they have exhausted their hydrogen fuel. Lower-mass stars (around 0.5 to 8 solar masses) will have a degenerate helium core and will enter the asymptotic giant branch (AGB) of the red giant stage.

AGB stars are different from red supergiants as they evolve differently. Instead of a supernova explosion, an AGB star will shed off its outer layers and form a planetary nebula. The remaining core will become a very dense remnant called a white dwarf.

Our Sun, which is a yellow dwarf, is not massive enough to become a red supergiant. After spending 10 billion years in the main sequence, it will start to burn helium and enter the red giant stage. 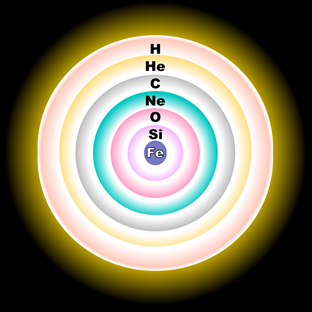 After exhausting their hydrogen supply, stars begin to burn a shell of hydrogen around the helium core. Very massive stars that will evolve into red supergiants will undergo helium fusion for about one or two million years. Most average size stars would stop fusion at carbon and oxygen. However, red supergiants continue to burn even heavier elements.

These stars continue onward until they start to burn silicon, and eventually iron. Fusing iron needs a lot more energy than it releases. A type II supernova will occur as a result of this rapid collapse. 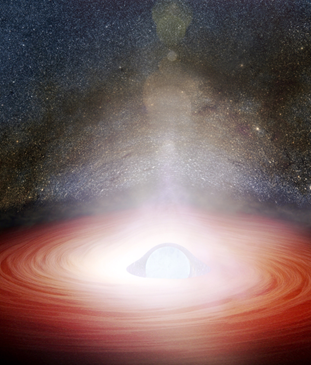 A supernova explosion will leave behind either a neutron star or a black hole depending on the initial mass of the star.

A neutron star is the collapsed core of a supergiant star that initially had 10 to 25 times the Sun’s mass. It is one of the smallest yet densest objects in the Universe. Just imagine, neutron stars have a radius of around 10 km (6 mi) but have a mass of 1.4 Suns!

Another possible remnants are stellar black holes which are formed by the gravitational collapse of a massive star. Black holes are unique regions of spacetime with intense gravity. The gravity is so strong that nothing that enters them can escape, not even light.

The first direct evidence of the existence of black holes was an image of the black hole at the center of the galaxy Messier 87. This, however, is a supermassive black hole—it did not originate from the collapse of large stars. 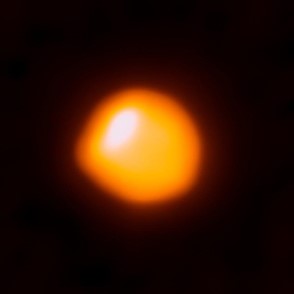 Betelgeuse is a red supergiant that marks the right shoulder of Orion. Though it is called Alpha Orionis in the Bayer designation, it is only second to Rigel as the brightest star in Orion.

Betelgeuse is a variable star with an apparent magnitude between 0.0 to 1.6. It is the 10th brightest star in the sky. It has an M1–M2 Ia–ab spectral type. Located only 548 light-years away, it is one of the largest stars that we can spot with the unaided eye.

This red supergiant is not only bright, but it is also very large. It is nearly 800 times larger than the Sun and 16.5 times more massive. If it were to take the Sun’s place in the solar system, Betelgeuse would reach as far as the asteroid belt and even the orbit of Jupiter.

Betelgeuse is only about eight million years old—much younger than the Sun which is 4.6 billion years of age. Because of its large size, it consumes its fuel faster and thus has a shorter stellar life. It shines with a luminosity of 126,000 Suns combined.

This red supergiant will continue to swell until it fully sheds its outer layers. As it nears the end of its life, Betelgeuse will leave behind either a neutron star or a black hole. 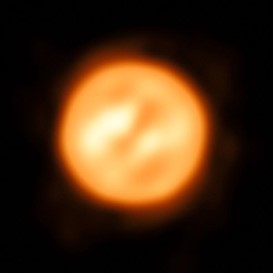 Antares is a red supergiant that is one of the most noticeable stars in the sky. Also called Alpha Scorpii ( α Scorpii), it is the brightest star in the constellation of Scorpius.

It is often mistaken for the red planet Mars because of its red color. This is the origin of its name, Antares, which means “anti-Ares.” If we can remember in mythology, Mars is the Roman counterpart of the Greek god Ares.

Antares is nicknamed the “Scorpion’s Heart” because it is located at the heart of the celestial scorpion. With an apparent magnitude that ranges from 0.6 to 1.6, it is the 15th brightest star in our night sky.

The radius of Antares is 680 times greater than that of the Sun. With this size, it would reach the orbits of Mars or Jupiter if were to replace the Sun in the center of the solar system. 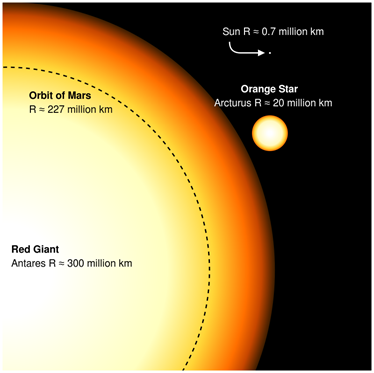 Antares is a variable star that shines with the luminosity of 10,000 Suns put together. Though it is much larger, it is cooler than our Sun. This red supergiant has a temperature of around 3,600 K while the Sun has around 5,700 K.

Antares is a binary star with a main-sequence star companion. This star system lies approximately 550 light-years from us. 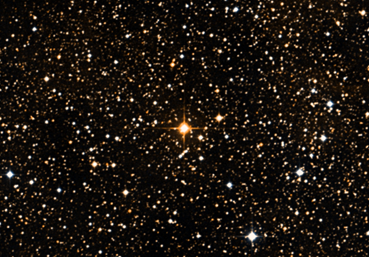 UY Scuti is a very large star located in the southern constellation of Scutum. The radius of this red supergiant is 1,708 times that of that Sun. If it were at the center of the solar system, it would reach into Jupiter’s orbit.

UY Scuti is a pulsating variable with an apparent magnitude of 8.29 to 10.56. This means it is not visible to the naked eye. Despite that, it is actually a very luminous star, shining with roughly 340,000 solar luminosities. We cannot see it from Earth because it is obscured by dust. It is located close to the center of the Milky Way in what is called the Zone of Avoidance.

UY Scuti is also called a hypergiant and it is one of the largest stars known. In fact, we could fit the volume of 5 billion Suns inside this star. Our Sun, which is still a main-sequences star, would look like a small dot if it were placed beside this supergiant.

UY Scuti is already fusing helium. When it exhausts its supply of heavy elements, this star will collapse under its own gravity and result in a supernova explosion. This solitary star is located approximately 9,500 light-years from us. 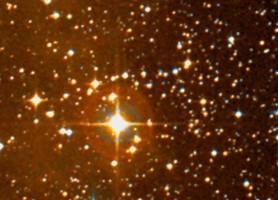 VY Canis Majoris is an extreme star. It is so large that it is described both as a red supergiant and a red hypergiant. It is located nearly 4,000 light-years away in the southern constellation of Canis Major.

VY Canis Majoris is a variable star with an apparent magnitude from around 9.6 to 6.5. This supergiant is nearing the end of its stellar life. It is actively losing mass and is surrounded by a circumstellar nebula.

VY Canis Majoris is among the largest, most massive, and most luminous stars in the Milky Way galaxy. The surrounding nebula and the pulsating nature of this star make it hard to determine its exact size. 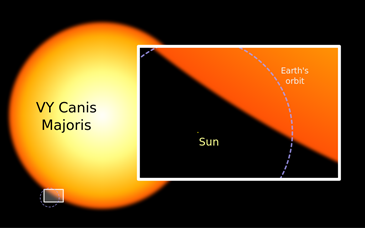 According to estimates, the radius of VY Canis Majoris is at least 1,500 times that of the Sun. It has about 17 times the mass of our Sun. Aside from that, it shines with a luminosity of 270,000 Suns. If it were the central star in the solar system, it would reach beyond the gas giant Jupiter.

The Sun vs Antares: https://upload.wikimedia.org/wikipedia/commons/thumb/1/15/Redgiants.svg/800px-Redgiants.svg.png