Rigel (Beta Orionis) has an apparent magnitude that ranges from around 0.05 to 0.18. This makes it the brightest star in the Orion constellation. It is followed by the stars Betelgeuse and Bellatrix, with an apparent magnitude of around 0.42 and 1.64 respectively. Let’s start by taking a look at some more cool facts about the Rigel Star!

Interesting Facts About the Star Rigel

Rigel or Beta Orionis is the brightest star in the equatorial constellation of Orion. It is a B-type supergiant that shines with a blue-white hue. It is an Alpha Cygni variable with an apparent magnitude of 0.05 to 0.18. Its absolute magnitude is -7.84.

We can easily spot Rigel with the naked eye. In fact, it is the seventh-brightest star we can see when we look up at the night sky. Though it is generally the brightest star in the Orion constellation, Rigel was given the Beta designation.

In the Bayer system, the Alpha Orionis designation was given to the red star Betelgeuse. As a large-range variable star, Betelgeuse sometimes shines brighter than Rigel. It is possible that when Johann Bayer assigned the naming system in 1603, Betelgeuse might be the brightest star in the constellation. At present, however, Rigel typically outshines Betelgeuse.

Rigel forms a multiple star system with three other stars. These companion stars are designated Rigel B and Rigel C. Rigel B is in itself a spectroscopic binary which means resolving them into two separate stars would be difficult because they are close to each other. The component stars of this binary are designated Rigel Ba and Rigel Bb.

The largest star in this system, sometimes called Rigel A, is more than 20 times as massive as the Sun. Though it is younger, Rigel burns with the intensity of about 61,500 to 363,000 Suns. This is why this supergiant looks bright from Earth even though it is roughly 860 light-years from us.

In the northern celestial hemisphere, the best time to see Rigel is during winter. This time, it is summer in the southern hemisphere. 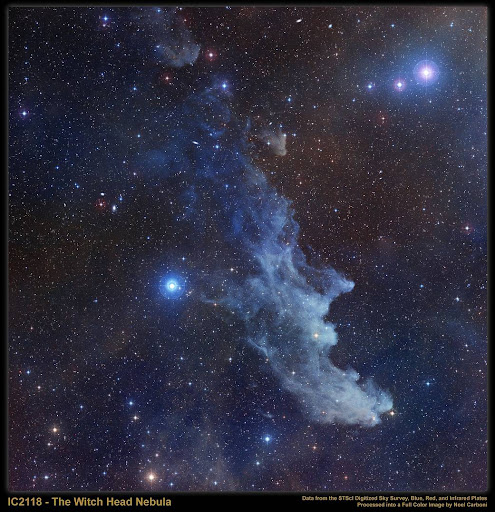 The Witch Head Nebula (IC2118) reflects light from the star Rigel. It has a distinct blue color which is got from the star. On top of that, the dust grain in the nebula is more efficient at reflecting the blue color. This object got its name from its appearance which looks like a witch or crone.

The Orion constellation was called “Jauzah” in ancient Arabic astronomy. And from this, the names of its star were born. The name Rigel originated from its position in the sky pattern of the celestial hunter.

The blue supergiant star was called Rijl Jauzah al Yusrā in Arabic which means “the left leg or foot of Jauzah.” Another name for it was Rijl al-jabbār, meaning “the foot of the great one.” From these names, the shorter “Rigel” was taken and became the more common name to refer to this star.

This traditional nickname was adopted by the International Astronomical Union (IAU) in 2016 as the proper name of this bright star.

In different atlases, Rigel marks either Orion’s leg, knee, or foot. Some sources depict Orion as a standing hunter, while others picture him kneeling on one foot. From whichever sources, Rigel is hard to miss as it is the unmistakable blue star on the lower left part of Orion. 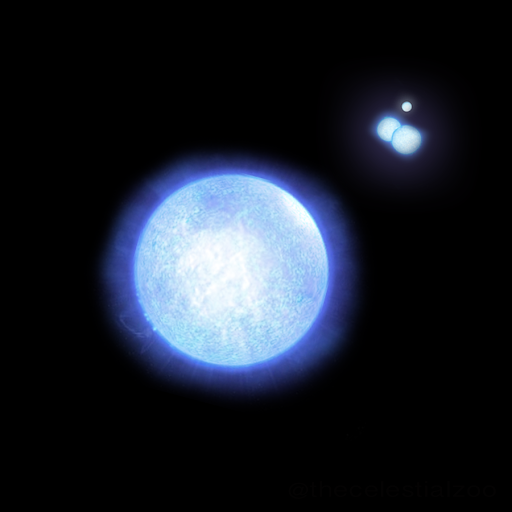 Located in the Milky Way, Rigel looks like a single star in the night sky but it is actually a four-star system. Its visual double was discovered by William Herschel in 1781. The primary star in the system is more than 400 times brighter than the other components.

The main star in the system is called Rigel A. It is a B-type supergiant with B8 Ia spectral type. Though the exact numbers are still uncertain, estimates on the luminosity of this star put it way more than 100,000 times that of the Sun.

The hydrogen supply in its core has already been spent and it generates energy through the fusion of heavier elements. This evolved star has expanded and will continue to do so until the core collapses and it becomes a supernova. This stellar explosion will be visible from Earth with an apparent magnitude of -11.

The other stars in the stellar system are called Rigel B and Rigel C or, simply, Rigel BC. Unlike the main star which is a supergiant, these components are still in the main-sequence stage.

Rigel B is a spectroscopic binary system that is hard to resolve visually because of the close distance between its component stars. This system is separated by about 2,200 astronomical units (AU) from Rigel A. In the solar system, AU is the distance between the Sun and Earth.

The double stars of Rigel B, Rigel Ba and Bb, only take about 10 days to orbit each other. They are 3.84 and 2.94 times as massive as the Sun, respectively. This system is about 440 times fainter than Rigel A. Since the primary star is much brighter, Rigel B is often lost in the glare, making it invisible in smaller telescopes.

Rigel C likely forms a triple star system with Rigel B. It was resolved from Rigel B in 1871 and is about as massive as Rigel Ba. Like the others, it is also a main-sequence star with a blue-white hue. 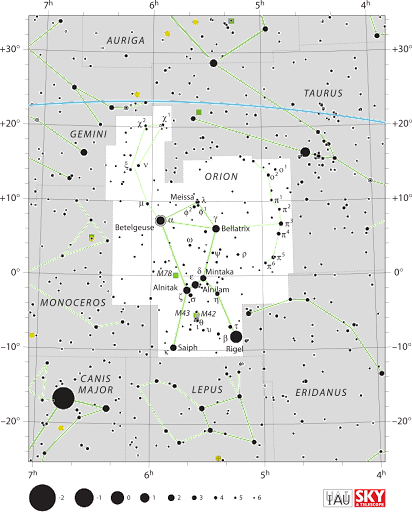 Orion is one of the easiest constellations to identify in the night sky. Everyone can see this constellation because it lies on the celestial equator. Aside from the distinct hourglass shape, it is made up of some of the brightest stars as well. The sky pattern of the celestial hunter can be easily seen with the naked eye.

The Orion constellation is named after a huntsman in Greek mythology. It is the 26th largest constellation among the 88 modern constellations recognized by the International Astronomical Union (IAU).

The blue and red supergiants Rigel and Betelgeuse shine the brightest in Orion. They are the seventh and tenth brightest star in the sky, respectively. The stars Betelgeuse and Bellatrix mark Orion’s shoulders while Saiph and Rigel represent his feet. The line of the three stars Alnitak, Alnilam, and Mintaka make up the Belt.

Interestingly, Orion has many other features that make it easily recognizable. There are many asterisms inside this constellation. The hunter’s Belt, Sword, Head, Club, and Shield complete the sky pattern of Orion.

Deep-sky objects are plenty in this constellation as well. Messier 42 or what is famously known as Orion Nebula can be found in Orion. This diffuse nebula is the reddish object that we can see in Orion’s Sword asterism. Also, the annual Orionids meteor shower, which occurs every October, originates from this constellation.

Every Asterism in Orion Constellation

Rigel Star in the Winter Hexagon 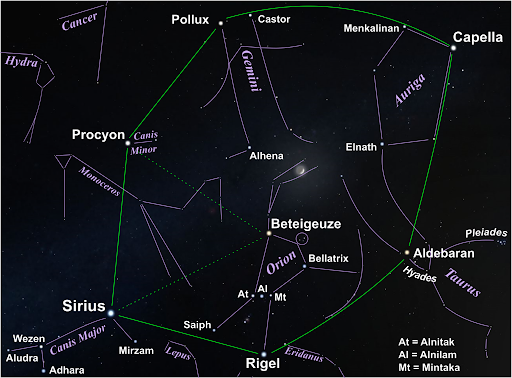 Orion’s brightest star, Rigel, is one of the vertices of the Winter Hexagon asterism. Also known as the Winter Circle, this asterism is made up of stars from different winter constellations in the northern sky. Inside this pattern is the smaller Winter Triangle asterism.

Together with Rigel in the Winter Hexagon are other first-magnitude stars. Though it is not a constellation, this asterism is one of the most recognizable patterns that can be seen with the naked eye. The Winter Hexagon is visible from around December to early March in the northern hemisphere.

Below are the stars that make up the Winter Hexagon/ Winter Circle:

Using Rigel to Find Other Stars 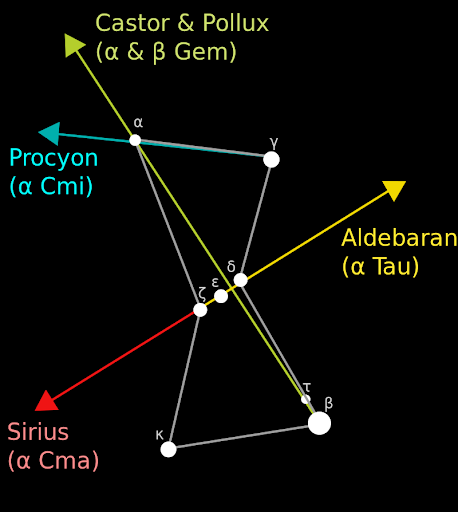 Since the star Rigel in Orion is very easy to spot, it is often used to located other stars. If you are looking for the constellation of Gemini the Twins, then this blue supergiant is very useful.

From Rigel, you can draw an imaginary line towards the red star Betelgeuse. Extending this line will point to Castor and Pollux, the brightest star in Gemini.

Where Can You See Rigel in the Night Sky? 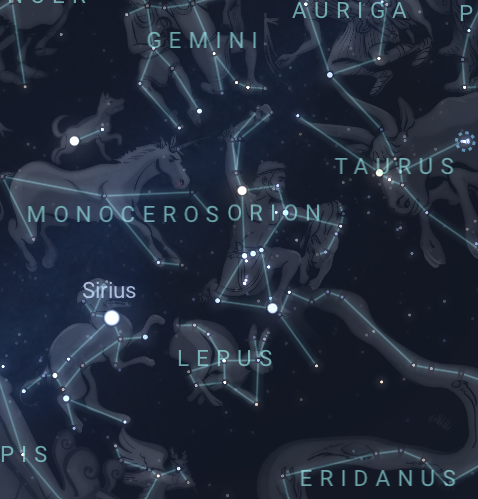 Rigel is easy to spot because it is part of a very recognizable constellation. This 0.13 magnitude star has a blue color and is located at the lower-left corner of the celestial hunter.

Aside from its distinct shape, we can also find Rigel in Orion through its neighboring constellations. The brightest star in our night sky, Sirius, is also located nearby. It is surrounded by the constellations of Gemini, Taurus, Eridanus, Lepus, and Monoceros.

How and When to Find Rigel?

In the northern hemisphere, winter is the best time to see Rigel and it culminates in December and January. Also, from the northern sky, it is one of the first stars in the constellation to set.

To see Rigel, one has to look first for the hourglass shape of Orion. We can find it using the constellations surrounding it and the Winter Hexagon asterism. The distinct blue-white star in the lower-left corner is Rigel. 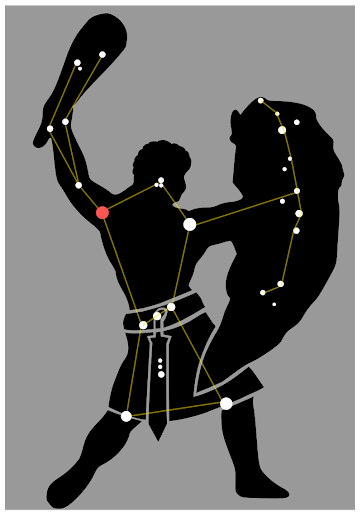 The star Rigel is most commonly recognized as the “left foot of the central one,” which pertains to Orion. However, since the constellation is seen in many places, different mythological stories were related to it across cultures.

In ancient Arabic, this constellation was also related to a black sheep that has a white face and feet. With that said, there was likely a time when the star Rigel marked a sheep’s foot, and not a hunter’s.

In Norse mythology, the constellation Orion is related to Aurvandil. According to stories, the hammer-wielding god Thor tossed the former’s toe on the sky to form a star. The star became known as Aurvandils-tá, which translates as “Aurvandil’s toe” in English. It is said that this is the Rigel star.

For the Māori people, the star Antares is called Rehua. It is considered the chief of all stars. The blue-white Rigel is the chief’s daughter and is called Puanga or Puaka.

The story of Orion in Greek mythology became the basis of it being known as the celestial hunter.

According to stories, he was a great hunter who boasted that he would kill all animals on Earth. This angered the Earth goddess Gaia so she ordered a scorpion to go after him. In another version, it was Artemis and Leto that dispatched the scorpion.

The scorpion defeated the gigantic hunter and both of them were placed in the sky. The scorpion became Scorpius and the hunter is Orion. Their rivalry is still evident in the heavens as we can never see the two constellations together in the night sky.

In the northern sky, Orion is a winter constellation while Scorpius can be seen during summer. They never meet as one of them sets when the other rises.

Where Can You See Rigel in the Night Sky?: https://stellarium-web.org/