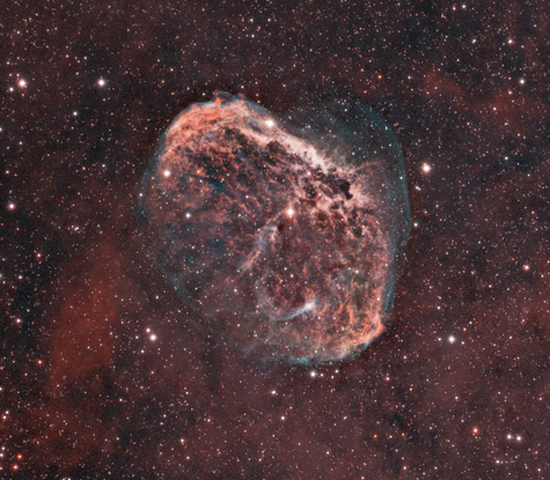 The Crescent Nebula is an emission nebula located in the constellation Cygnus, around 5,000 light years way from Earth. It has an apparent size of 18′ × 12′ and lies about 2.7 degrees southwest of Sadr, Gamma Cygni, the central star of the Northern Cross. It lies in a dense field of the Milky Way and is one of several notable deep sky objects in the area of the Northern Cross.

Neighboring deep sky objects to the Crescent Nebula are:

It is a relatively faint object with an apparent magnitude of 7.4 requires exceptionally dark skies and a UHC or OIII filter to be seen. The nebula has a low surface brightness and can only be seen in a telescope of at least 8-inch aperture. In smaller telescopes, it appears as a nebulous patch, while larger instruments reveal the crescent shape.

The Crescent Nebula has been given the designations NGC 6888, Sharpless 105 and Caldwell 27. Its shape also resembles that of the Euro sign, which is why it is sometimes also known as the Euro Sign Nebula.

The shape and glow of the nebula is thanks to the collision that formed it. The Wolf-Rayet star WR 136 (HD 192163) collided with and energized the slower moving wind ejected by the star when it became a red giant. The collision produced a dense shell, which continues to expand at a speed of 80 km/s, and two shock waves.

One of these shock waves is moving outward from the shell and producing the green filamentary structure visible in images, while the other is moving inward to create a bubble of gas that is heated to X-ray emitting temperatures. The hot gas ejected by the star moves at speeds of 2,000 to 3,000 km/s and the star sheds about a solar mass of material every 10,000 years.

In a few thousand years, the star WR 136 is thought to end its life in a supernova explosion. It may be a binary star with a low-mass companion of spectral classification K or M, and is thought to be around 4.7 million years old. It is 3.3 times larger, 15 times more massive and 260,000 times more luminous than the Sun.

The Crescent Nebula was formed by the fast stellar wind from the Wolf-Rayet star WR 136 (HD 192163) colliding with and energizing the slower moving wind ejected by the star when it became a red giant around 250,000 to 400,000 years ago.

The nebula was discovered by William Herschel in 1792.