Callisto orbits just beyond Jupiter’s main radiation belt and is the outermost of the Galilean moons – the four largest moons of Jupiter: Io, Europa, Ganymede and Callisto – discovered by Italian scientist Galileo in 1610.

Size of Callisto compared to Jupiter

The name of the moon comes from Greek mythology.

Callisto was a nymph who had an affair with the king of the gods, Zeus. His wife Hera then changed her into a bear before Zeus transformed her into a star and placed her in the sky as the constellation Ursa Major. This constellation is also known as the Great Bear, or the Plough. There is also a Little Bear constellation which was the son of Zeus and Callisto. All of the moons of Jupiter are named for Greek mythological figures seduced by Zeus.

The Galilean moons were discovered in 1610 by Galileo

The four largest moons of Jupiter are known as the Galilean moons after Galileo, who discovered them in 1610. They weren’t discovered prior to this because they cannot be seen with the naked eye and Galileo was the first person to actually design a telescope to be used to look at the sky and our vast universe.

Since Callisto is larger than the dwarf planet Pluto and a similar size to Mercury you might think it could be considered a planet. However, it orbits the planet Jupiter and not the Sun, which is one of the primary factors in bodies being officially named as a planet (or dwarf planet).

The surface of Callisto is the most heavily cratered and also one of the oldest landscapes in our solar system. Scientists believe it is a dead world with no signs of geologic activity like plate tectonics or volcanism on its surface.

The moon is made of around 60% rock/iron and 40% ice and may contain liquid water.

Callisto is composed of both rock and ice, in approximately equal measures, and there are also traces of water ice, carbon dioxide, silicates, and organic compounds on the surface. The Galileo spacecraft also revealed that the moon may have subsurface ocean of liquid water 100 km or more below the surface.

Through a telescope, Callisto is brighter than our Moon

Despite being 628,300,000 km from Earth, Callisto appears much brighter in the sky than our Moon when viewed through a telescope – despite our Moon being only 384,400 km. This is because the surface of Callisto is made up of a very thick layer of ice which reflects the Sun much more than the surface of our Moon.

Unlike Io, Europa and Ganymede, Callisto doesn’t suffer from an orbital gravitational pull. This means there is less of a tidal heating – a build up of friction, orbital and rotational energy that are dissipated as heat in the crust of the moons and planets involved – which have caused the melting of surface ice from the rocky mantle of the Europa moon, for example. The reason it is less affected by Jupiter’s magnetosphere is that it orbits further away from the planet.

Callisto is over a million miles from Jupiter.

Callisto is tidally locked to Jupiter.

Similar to Earth and its Moon, Callisto is tidally locked to Jupiter. This means that the same face of Callisto is always pointing toward Jupiter and Jupiter would appear to be still when viewed in Callisto’s sky.

The largest crater on Callisto is nearly 4,000 km across.

The largest impact craters on Callisto are huge multi-ring basins which are surrounded by concentric rings that appear to be cracks that have been smoothed out by the slow movement of the ice over a long period of time. Valhalla is the largest of these impact craters and stretches to around 3,800 km in diameter from the outer trough zone. It is named for Valhalla, the Norse God Odin’s hall where warriors are taken after death.

Callisto has a very thin atmosphere.

The atmosphere of Callisto is very tenuous and is composed mostly of carbon dioxide and probably molecular oxygen as well.

Unlike Earth’s Moon which may have been a piece of Earth that broke away after an impact billions of years ago, Callisto is thought to have formed by slow accretion from the disk of the gas and dust that surrounded Jupiter after the planet was formed 4.5 billion years ago.

Callisto may be able to harbor life.

Although it is not considered to be geologically active, the likely presence of an ocean beneath the surface of Callisto leaves open the possibility that it could harbor life. Also, it has low levels of radiation and has long been considered the most suitable place for a human base for future exploration of the Jovian system. However, it is though that the conditions may be more favorable on the nearby satellite, Europa. 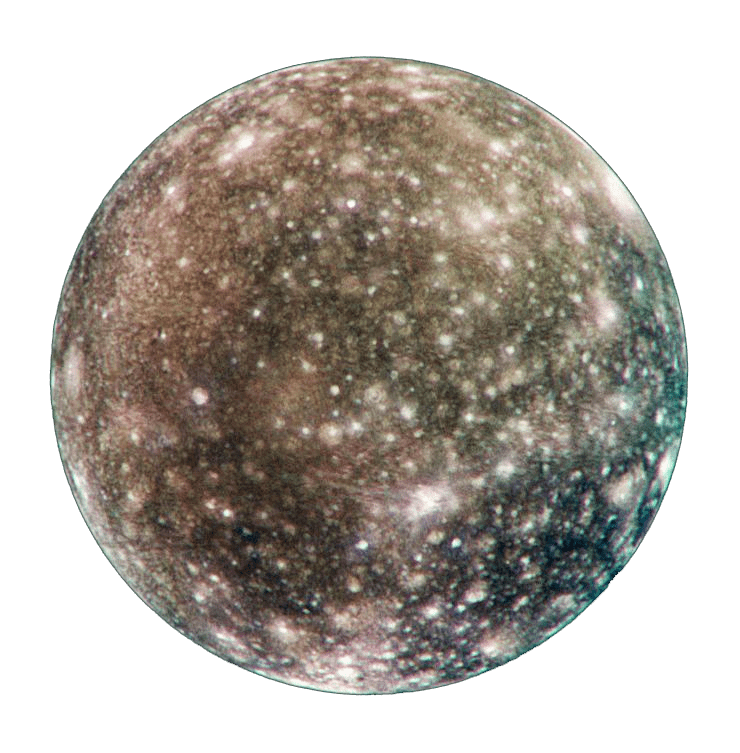